Over the winter of 2016/17 I made a set of pictures we subsequently turned into a book called: Trees, Sand and Snow. 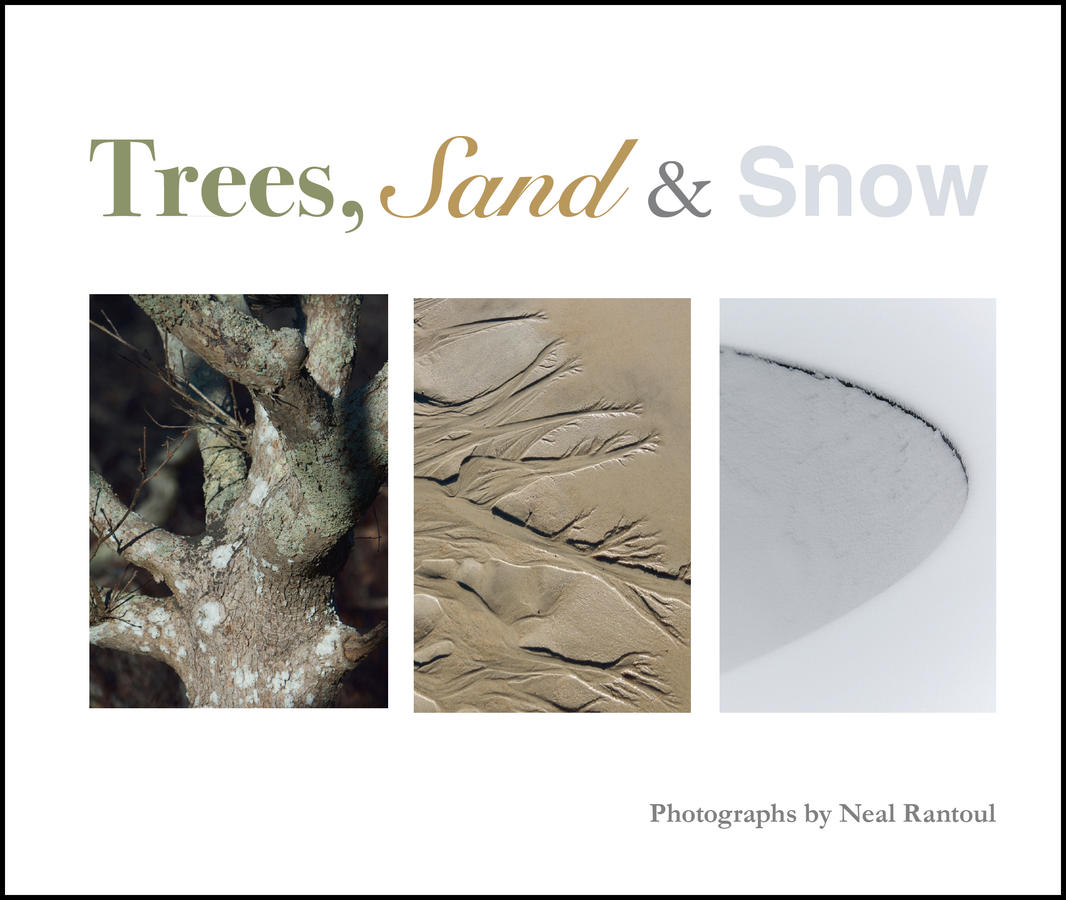 We're going to take a look at all three chapters in the blog with the next three posts, starting with the first chapter called, appropriately enough, Trees

The full series of the Trees photographs are on the site: here

Here is the opening essay:

Trees
The pictures of the stunted oak trees were made in the fall of 2016 in Wasque at the far end of the island called Chappaquiddick, just off of Martha’s Vineyard. While Chappy is a separate island accessed by a three-car ferry from Edgartown it is often clumped together by islanders as being part of the “Vineyard”.
The first few photographs in this chapter bring us on an early morning to a field with some trees on the horizon being hit by the sun as it rises, warm and yellow. These serve as the introduction to all three chapters, not only to this one. We then reach the remote end of the island called Wasque, the Vineyard’s most desolate and severe environment, with strong prevailing winds, erosion and salt spray limiting the height of the main topic of this chapter, the stunted oak trees in a stand at the edge of the bluff. In past years most of this large stand have been taken out by storms eroding the bluff away, the trees falling down the bluff like lemmings into the sea. In very recent times a cut into a nearby pond has closed allowing the formation of the barrier beach you can see in my pictures. This has given these oak trees a reprieve from their march to the sea, but the cut to the pond will open again and erosion will resume, sealing the fate of these magnificent characters shown in the photographs.

I think of the stunted oak trees at Wasque on Chappaquiddick Island as condemned, their future limited by natural forces and serving as a symbol for the destruction the rising ocean will cause. What I find especially poignant is that they do so in silence.

The trees themselves, photographed to emphasize their individuality, stand as strong players in an alien place. I can’t help but think of the cold starry night in mid-February, these trees buffeted by the frigid cold wind coming off the sea, season after season, year after year. They exist as survivors, tough in ways we can’t truly understand.

So, we start with the beautiful but sobering pictures of these trees in their inexorable march towards the bluff and their subsequent destruction, be it next year or ten years from now. Time doesn’t stop because we can’t see the hands on the clock moving. 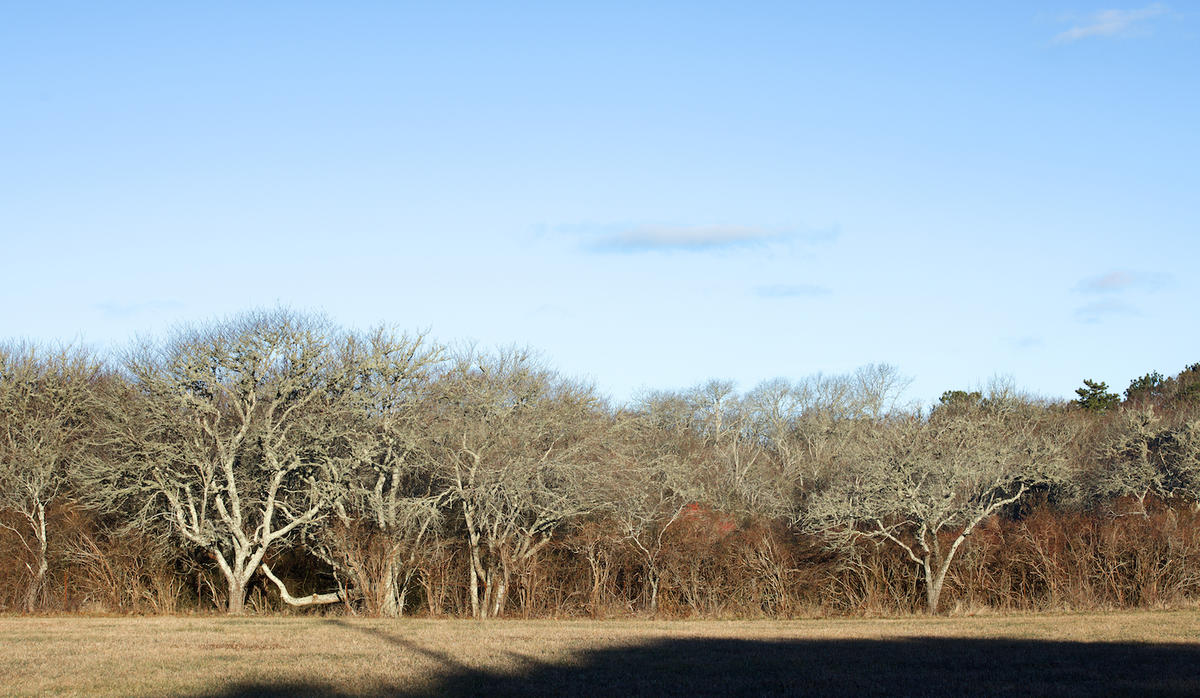 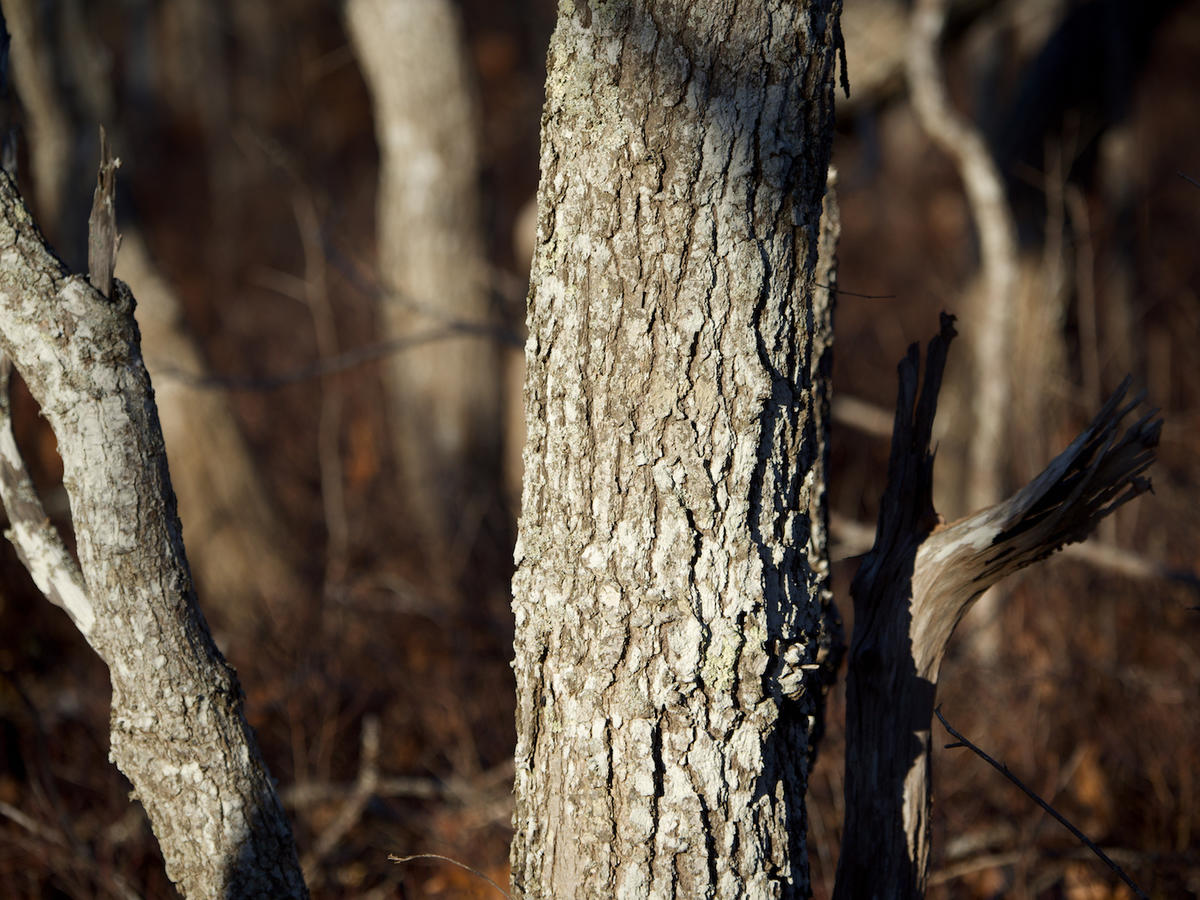 After the initial photographs placing us at the end of the island and looking at the stand of stunted oaks with the ocean at my back, the pictures move into individual trees, as characters with their own personalities and attitudes, some in defiance of their plight and some in acceptance of it. 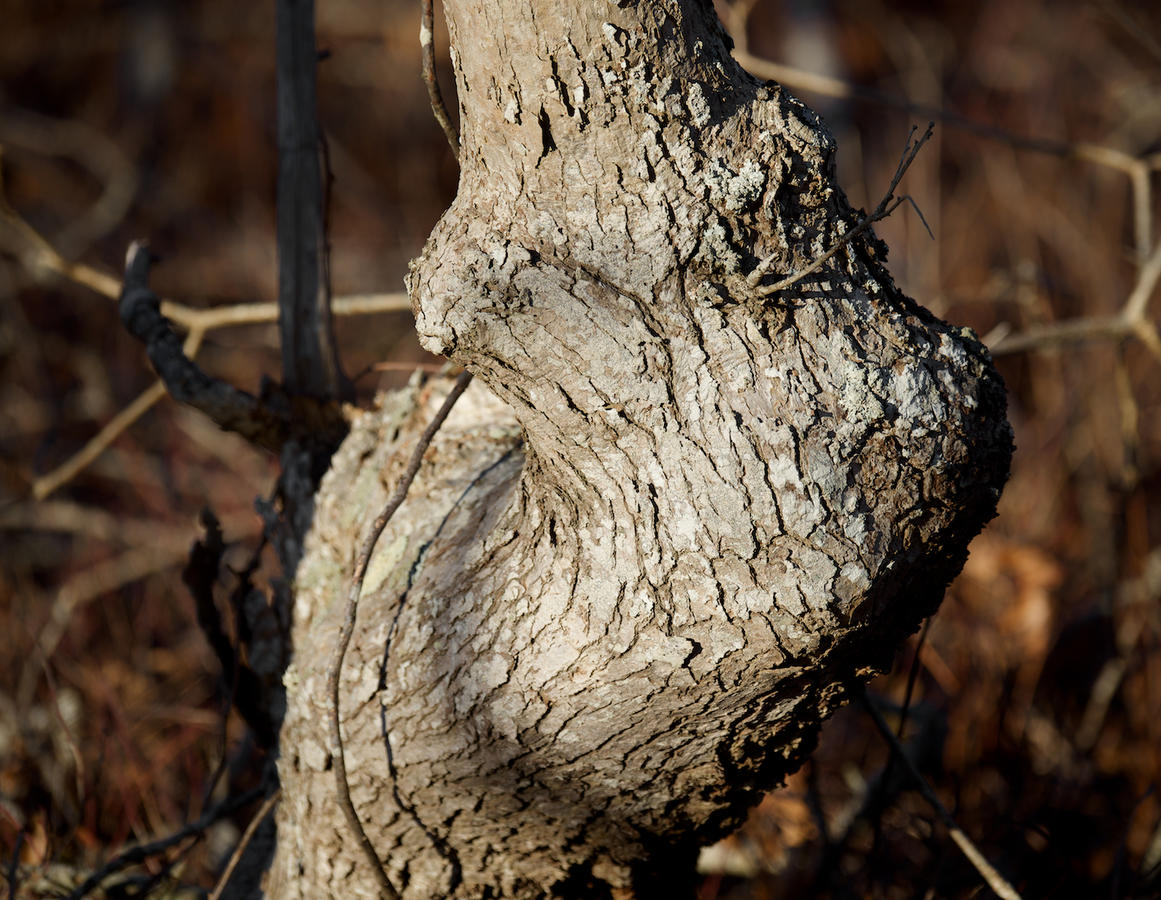 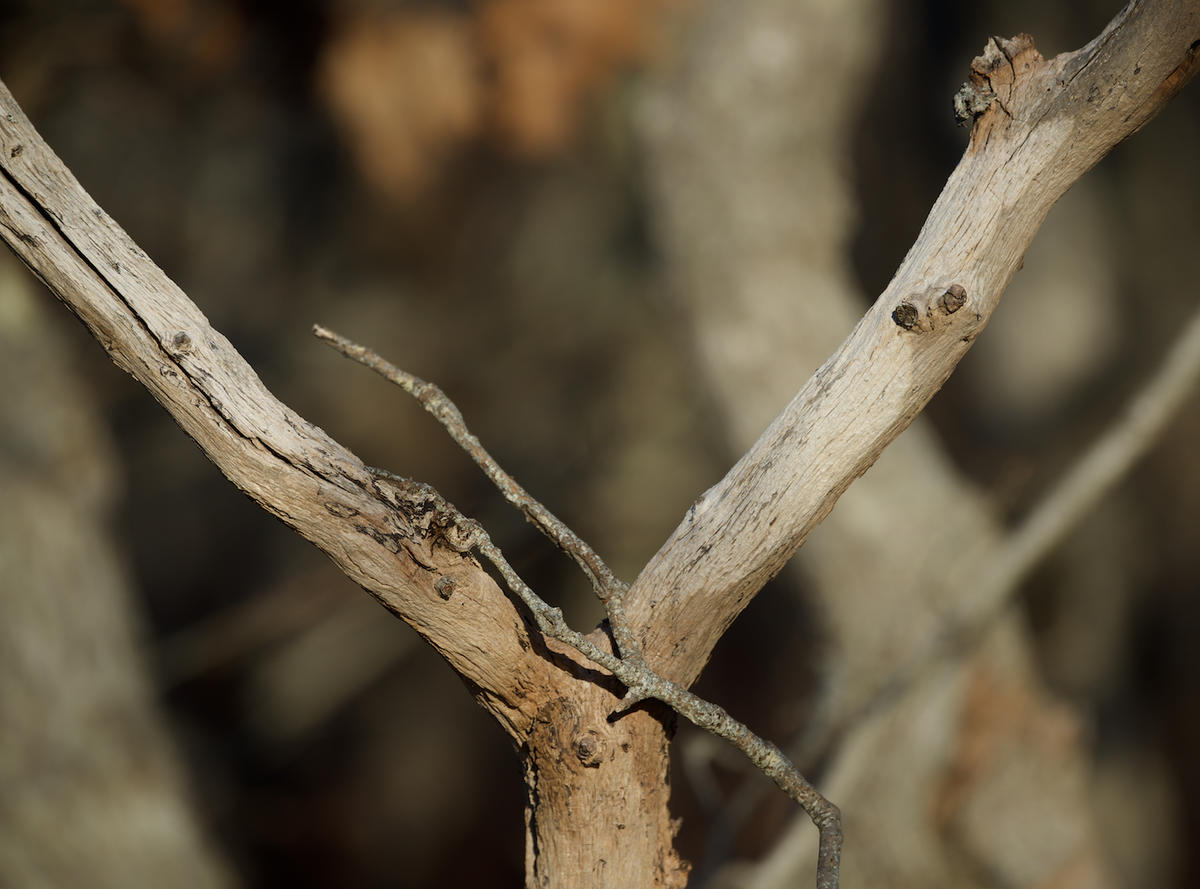 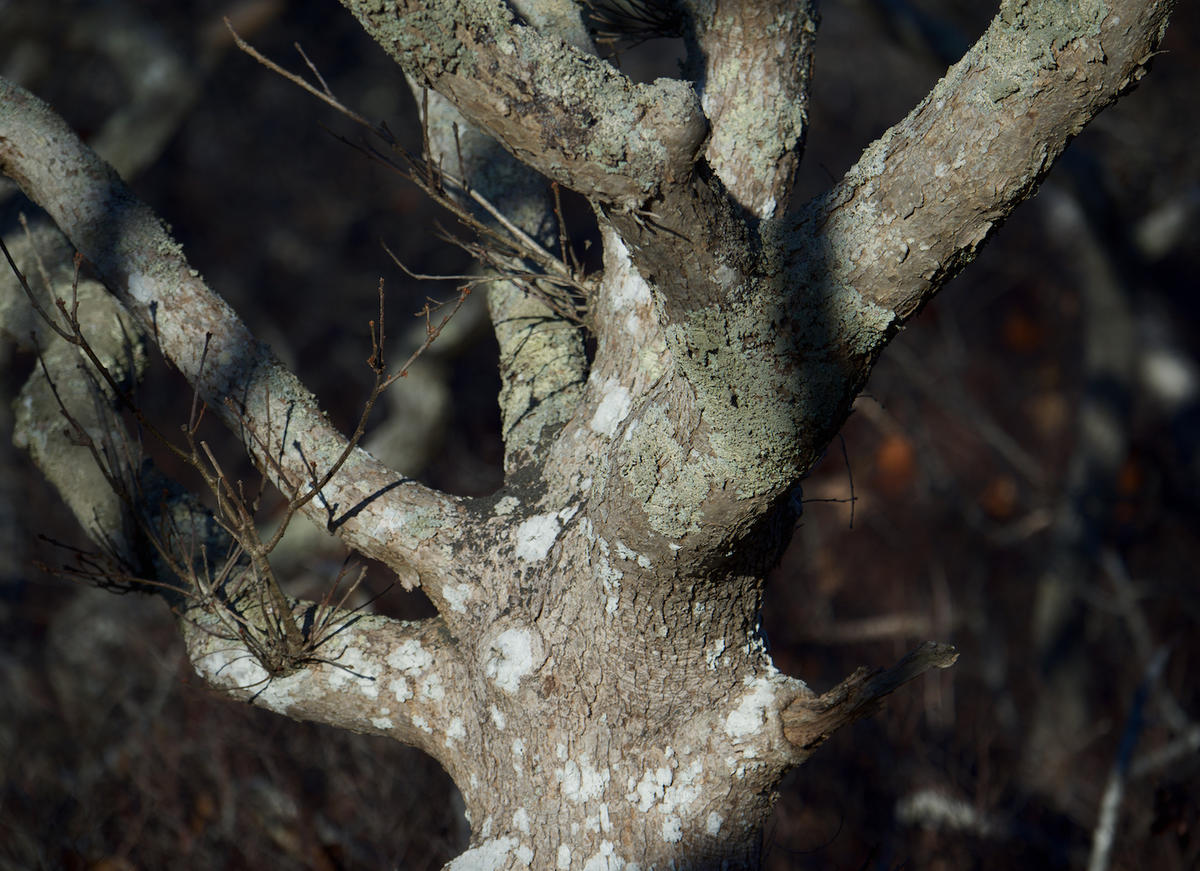 The concept is time, of course. How these trees are doomed to fall into the sea in a week, a month, years or decades.

In reviewing the work now,  preparing to include it in the blog, remembering the miracle that was that one day on these two islands, Chappaquiddick and Martha's Vineyard, shooting "Trees" and then driving up island later that same day and shooting the next one, "Sand", it is almost too much to bear. To think this one day would align like that, over countless other days over my career that had not come close or failed or where I hadn't even seen the possibility for something happening at all still leaves me wondering what the hell was going on that day and seriously humbled by it. "Fortuitous" doesn't quite do it justice. 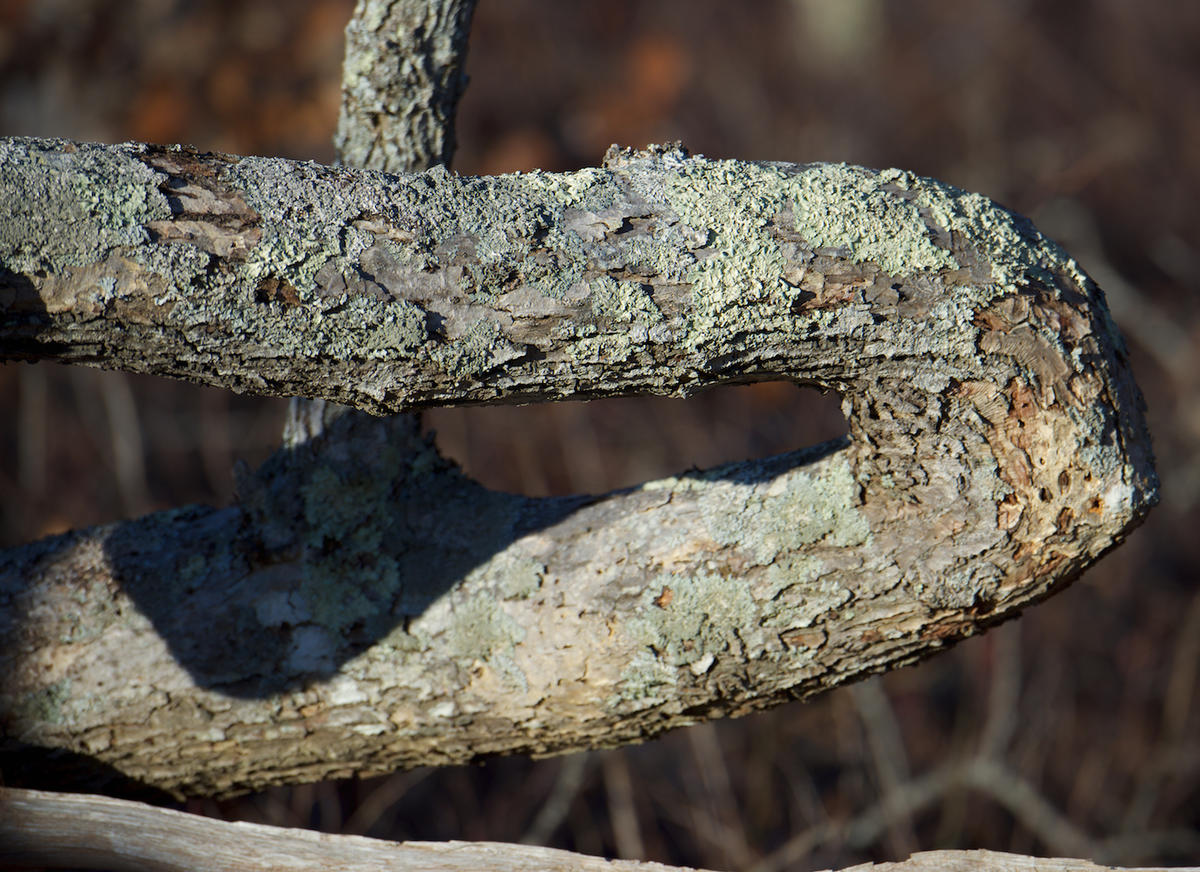 So starts the sequence of three series contained in one book: Trees, Sand and Snow. This intends to imply time as spread out ahead of us as an abstract in that this impending change; the erosion and destruction of this stand of stunted oak trees at Weasque will continue their march to the sea sooner or later, as inevitable as the tide will obliterate the patterns in the beach seen next in the Sand chapter or as the snow covering the concrete skate park in the last chapter called Snow.

I thank you for following along.

Note: Martha's Vineyard is much on my mind as I leave later this week for a month on the island. The month of May can be a tease as, due to surrounding cold water, the island is late to come to spring. This tends to make it wet and foggy. Can't wait.

Next post will be "Sand", the second chapter in the book.

In an edition of 5 and available for viewing at the artsit's studio. Contact: nrantoul@comcast.net

Poucha Pond runs to the right of the infamous Dike Bridge on the small island of Chappaquiddick off of Martha's Vineyard in Massachusetts. The bridge was where Senator Ted Kennedy's Oldsmobile 88 flipped over on its roof into the water at night in July 1969. Kennedy was driving and survived the accident, Mary Jo Kopechne did not. Read more