In the summer of 1989, while on Martha's Vineyard, I made a photograph of what we always called "Keith's Farm", along Middle Road in Chilmark. That photograph would be used to make this poster: 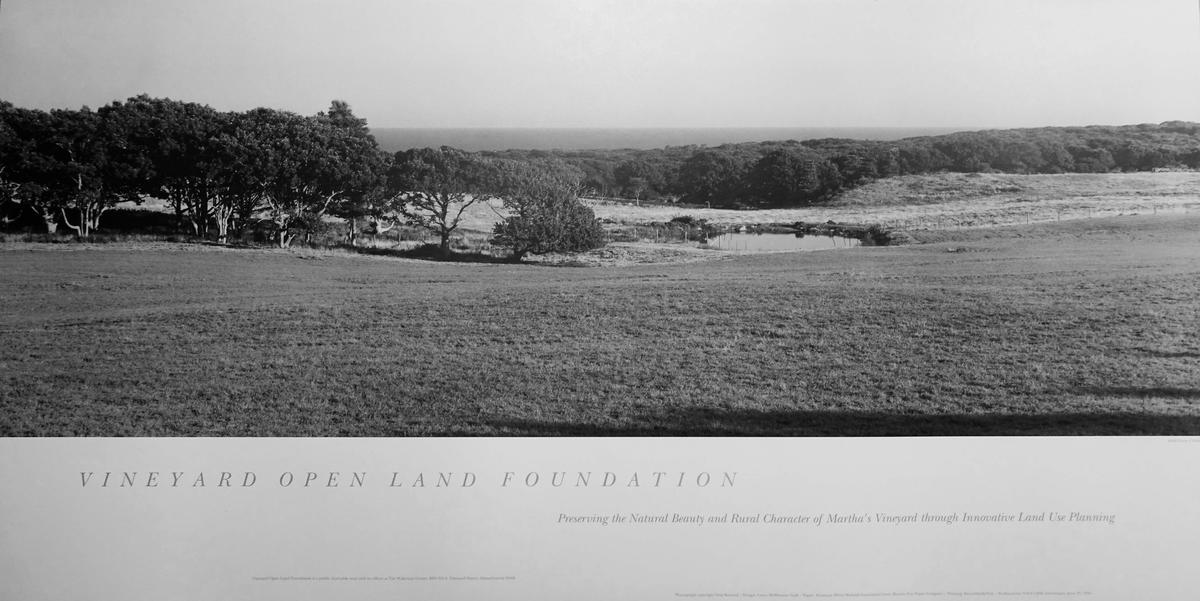 for the Vineyard Open Land Foundation (VOLF) for their 20th year anniversary. I made it using the 8 x 10 inch camera and cropped it (rare for me) to fit a panoramic format. Michael McPherson (of Corey McPherson and Nash Design) was the designer and we used a local printer and applied a slightly yellow varnish overcoat to give the image its somewhat warm look. I donated my photograph and Michael charged a basement rate for his design. This was a time in my career when I was working to help various non profits promote their causes visually by offering my services pro bono.

While on the Vineyard I drive by this same field daily as it is less than a mile from the family home. I always think of the circumstances under which I made the poster image and thought I would share them with you.

In the summer of 1989 my friend Rob Gooblar and his partner Gail Hill were renting Ozzie Fischer's cottage down at Beetlebung Corner. The evening I made the poster photograph we were having a cookout on the beach at Squibnocket with a group of friends. I had proposed to VOLF earlier in the year that perhaps they could improve the effectiveness of their message by using pictures of mine of the island. They countered with an offer to allow me on their managed properties to make pictures. By the time I made the poster image that evening I knew what they wanted and Keith's Farm was part of their charge, to help the family position some new houses with site lines that would not obstruct the view to the South Shore coastline.

What prevailed that summer was this: my father had fallen while walking down stairs in May in Providence,  hitting his head. He was in critical care and in a coma in a hospital on the mainland. My family and I were frequent visitors, going over for the day to see him and then returning to the island. My mother was a confused and disoriented mess. She had been married to my dad for 49 years and was completely out of sorts, making odd decisions and finally renting an apartment in Providence to be close by but then when visiting him only staying for a few minutes.  The whole summer was like being in a state of suspended animation, waiting for the second shoe to drop. My dad died that fall.

I drove by the field the other day at dawn, remembering that odd summer infused with impending tragedy, the ending of my Dad's life, a long life well lived. I think about a place where we have some history, where a drive down a familiar road can resonate, where there has been so much change and so much has stayed the same. I stopped. Pulled out the tripod, put the camera on it and framed the farm pond much as I did 29 years ago when I was 42. Before 9/11, before Obama, before Trump.