I just added a series to the site called Mountain Work from 1977/78, (here). Hard to believe I was making pictures so long ago but it's true.

Mountain work was series work before I knew most of my career I would be a series photographer. I made them during a very active period when I was carrying several projects at the same time. In truth my single mindedness about making pictures back then looks, from this perspective, a little deranged but there is no doubt I was making good work in there, if perhaps making too much. Mountain Work was a portfolio of 20 black and white photographs made at the top of  "drive up"mountains. I thought then and still do that these are unique places, with wide vistas, huge skies and, in the summer, people from all walks separated from their more mundane lives, placed as though the sky above was a sort of backdrop for them and, yes, presumptuous I know, for me as well to photograph their interactions, joys  and gestures at being on top of the world. I was passionate about the project and went to places like Mt. Tom, Mt Battie, Mt Tamalpais, Mt Washington, Mt Cadillac. The only rule was that this be a destination you could get to by driving to the summit. Tourist mountains.

Wait a minute. Do you realize the exceptional-ness of the last few sentences in the paragraph above?  This from the guy that does not photograph people. Well, I did in this series, so there. From Mountain Work in 1978 to Monsters in 2015 (some 37 years!) being shown at 555 Gallery in Boston in September, I've gone from photographing the human beings in situ to photographing fake people as masks and mannequins. We will see soon if this is progress.

At any rate, before we get to the pictures let me place them in context. In those years I was single, had not yet started a family and was in my early 30's. I began teaching at Harvard in the fall of 78, was teaching summers at the Maine Photographic Workshops, and had been teaching at NESOP (New England School of Photography) for a couple of years. I would, the following winter, take a self imposed leave from both to drive through the Southwest to photograph. This was the trip that changed my life because I spent 3 days with Fred Sommer (posts on that begin here and continue for three more, searchable by typing Fred Sommer in the search field).

The Mountain Work also ushered in something else. The pictures were mostly made with Kodak's Plus-X. The year before I had devised a new and constant film agitating procedure for processing my negatives and was showing that off with these pictures. While these on screen won't show it well, the large expanses of middle tonality grays of skies in the series were smooth and clean.

I would drive to the top of the mountain, park, get my camera out and stay for hours, watching as the cast of characters changed as they got out of their cars, headed over to the viewing area, pointed out at things way off, took pictures, hung out a little, got back in their cars and drove away. Only to be replaced with others in a steady stream of  humanity in all shapes, sizes and dispositions. 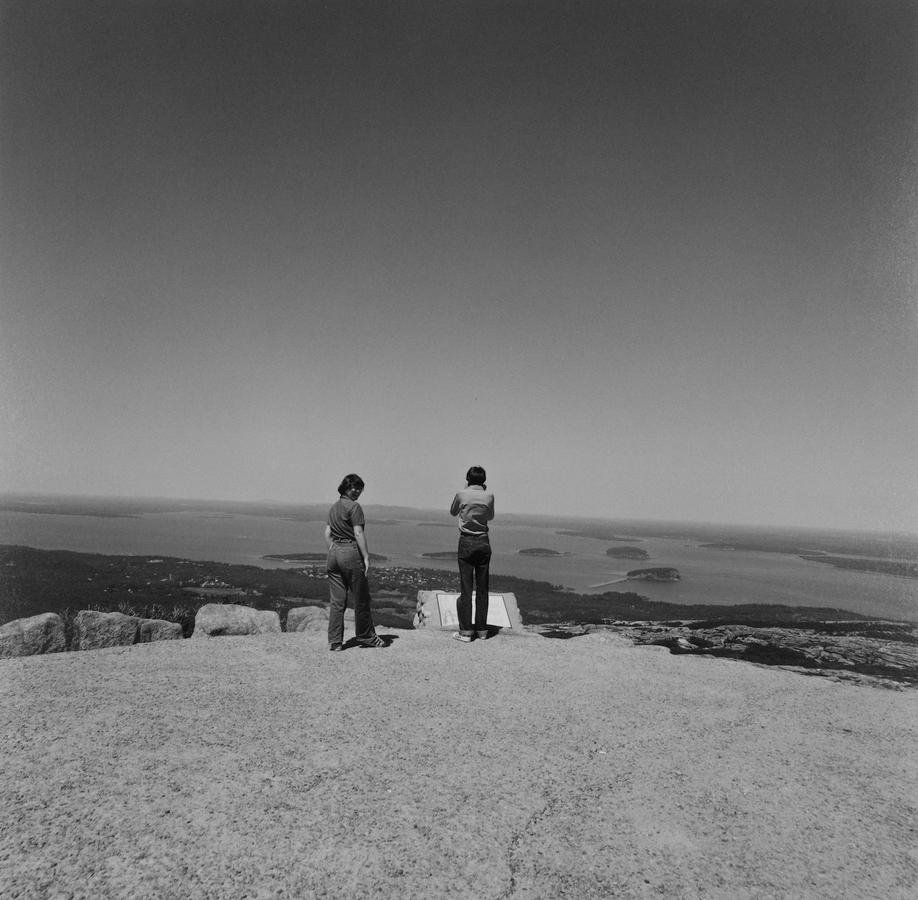 This was a sequenced series, in that it moved from start to middle to end in a flow. 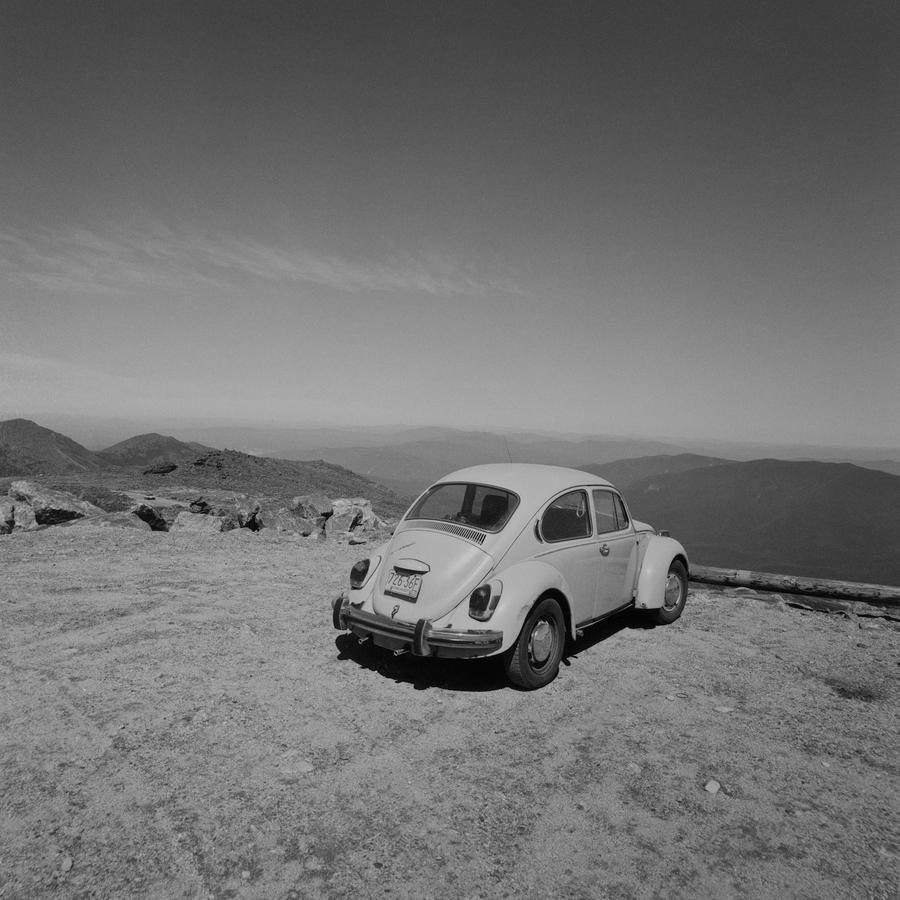 I treated vehicles about the same, photographically, as I did the people. 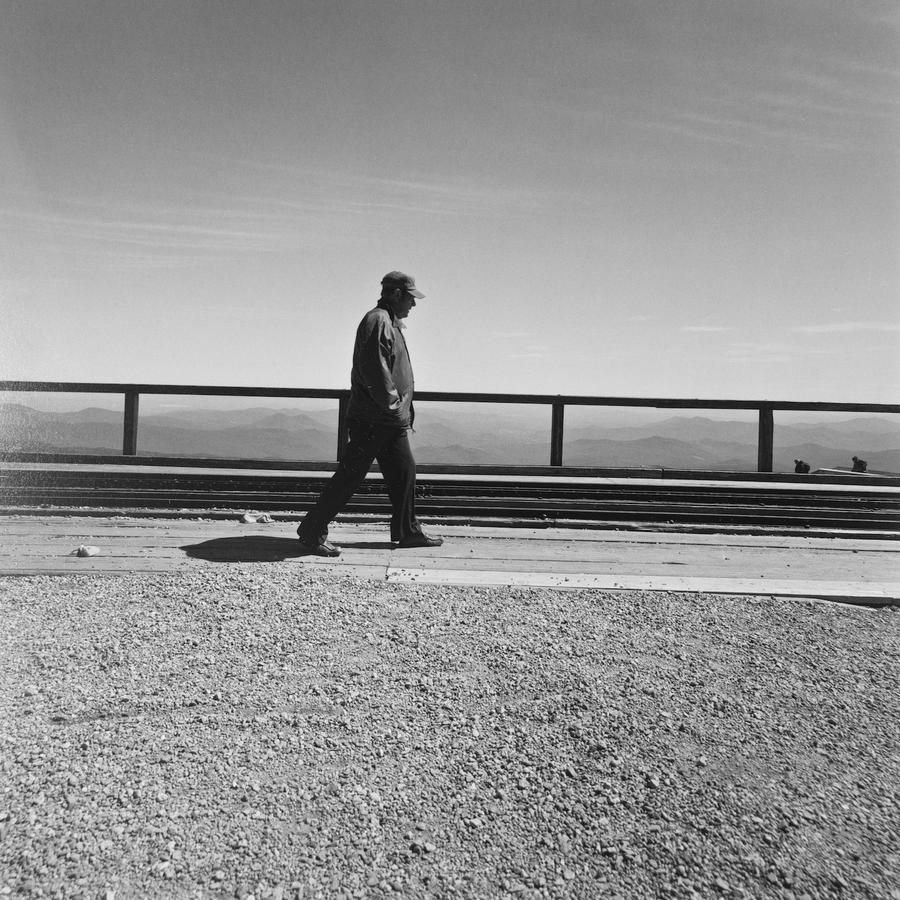 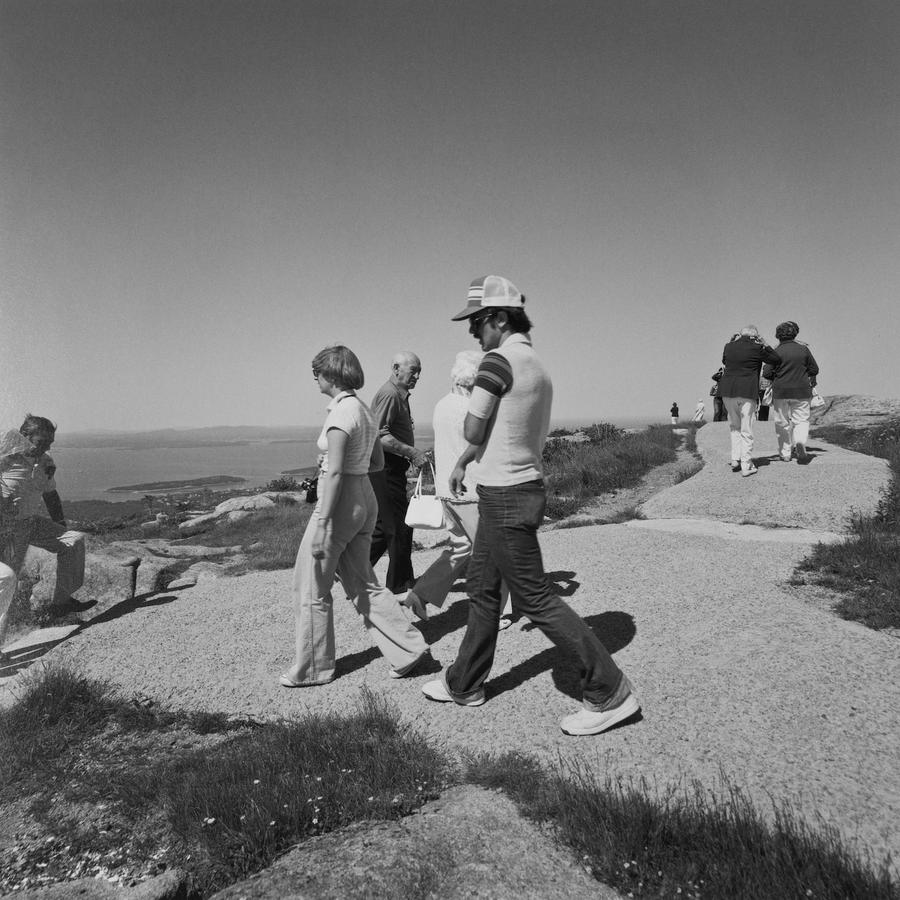 What's the exhibition history of these pictures?  Practically nonexistent. I showed them once, in a show at my niece's non profit gallery in Newport RI in the 90's. Published? Nope. Anyone know about them before now? Pretty safe to say no. The prints are about 12 inches square, toned with selenium and cool in color. This is a little embarrassing to admit but there is only one copy of these prints. Back then, no one I knew printed editions or copies of prints. 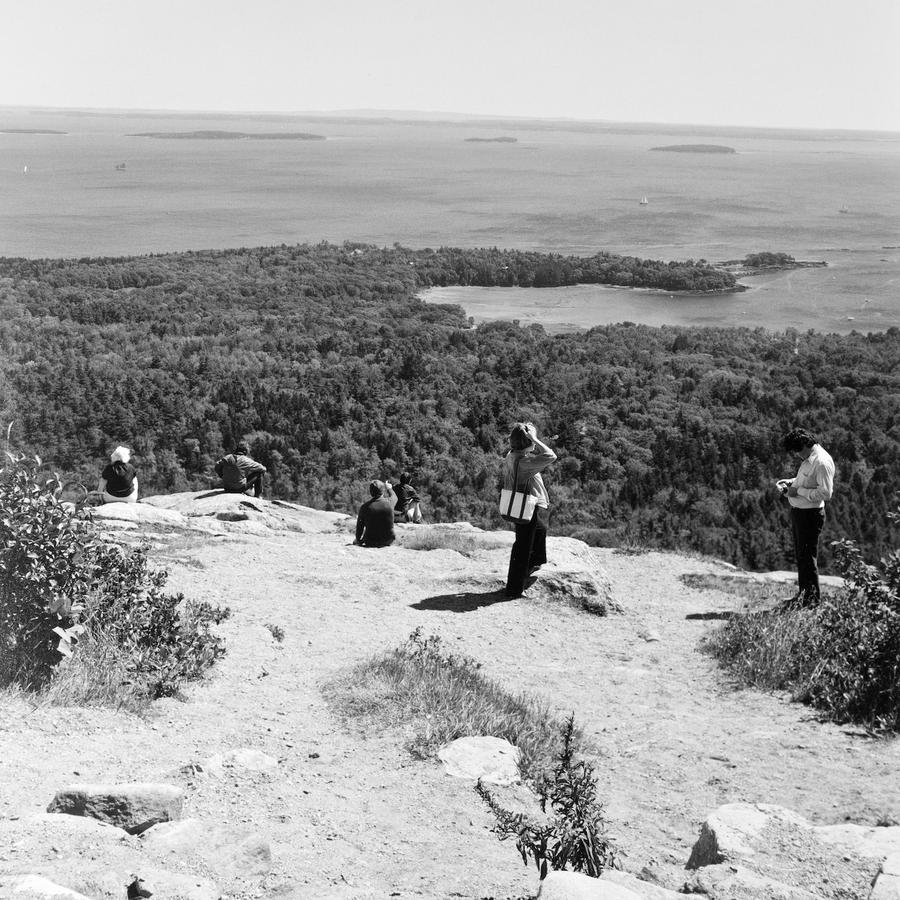 This one, with a Rollei SL 66 that could tilt, made hand held. Scheimpflug through space. Don't know what that is? Go here. Sharp from small bush in foreground, through woman's arm then off to the left through trees and to the horizon. All the rest not sharp. I used this camera quite often that way. I felt it differentiated my work and that I could direct the viewer's path through my pictures. 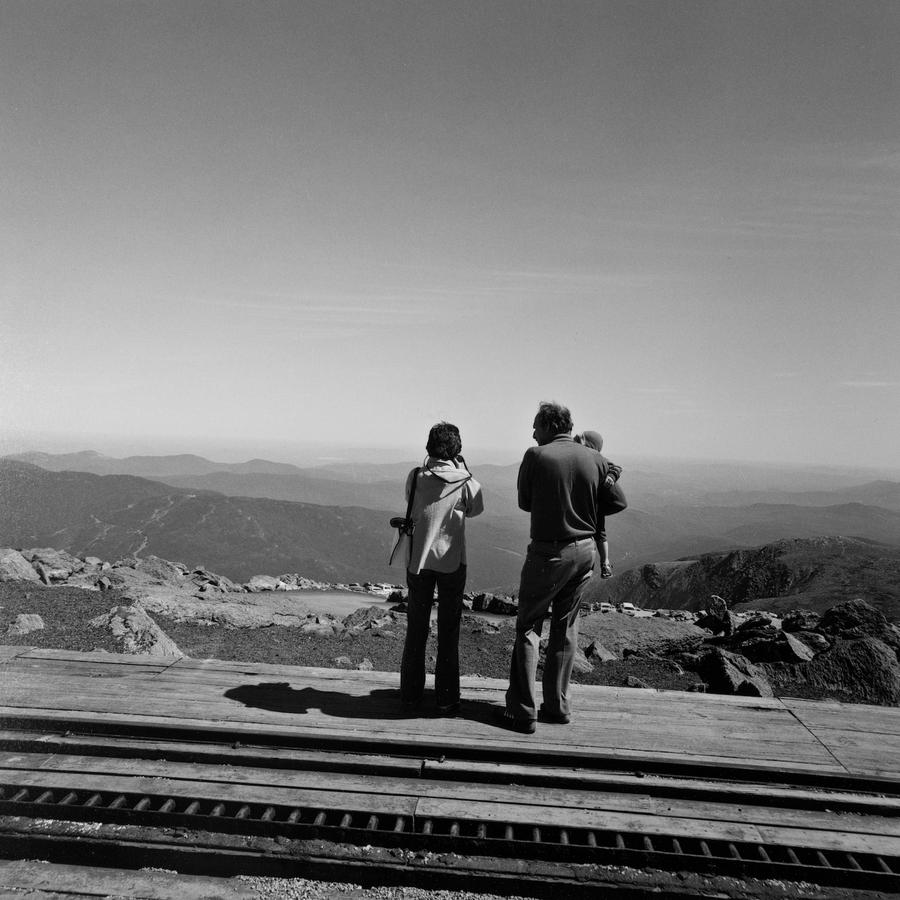 I always thought this one above predicted my moving into a stage of marriage and being a young parent with a baby in my arms. In fact, I would be a parent four years later. 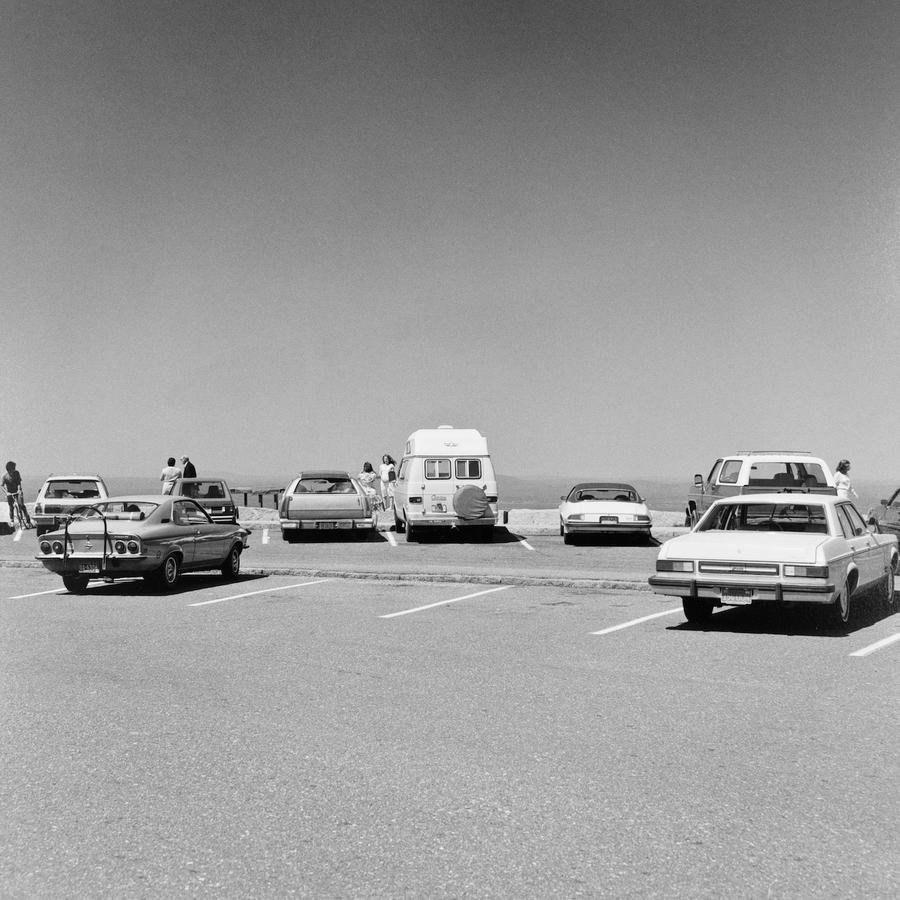 This one is a favorite: independent activities on the stage of this parking lot at the same time, almost as though choreographed. 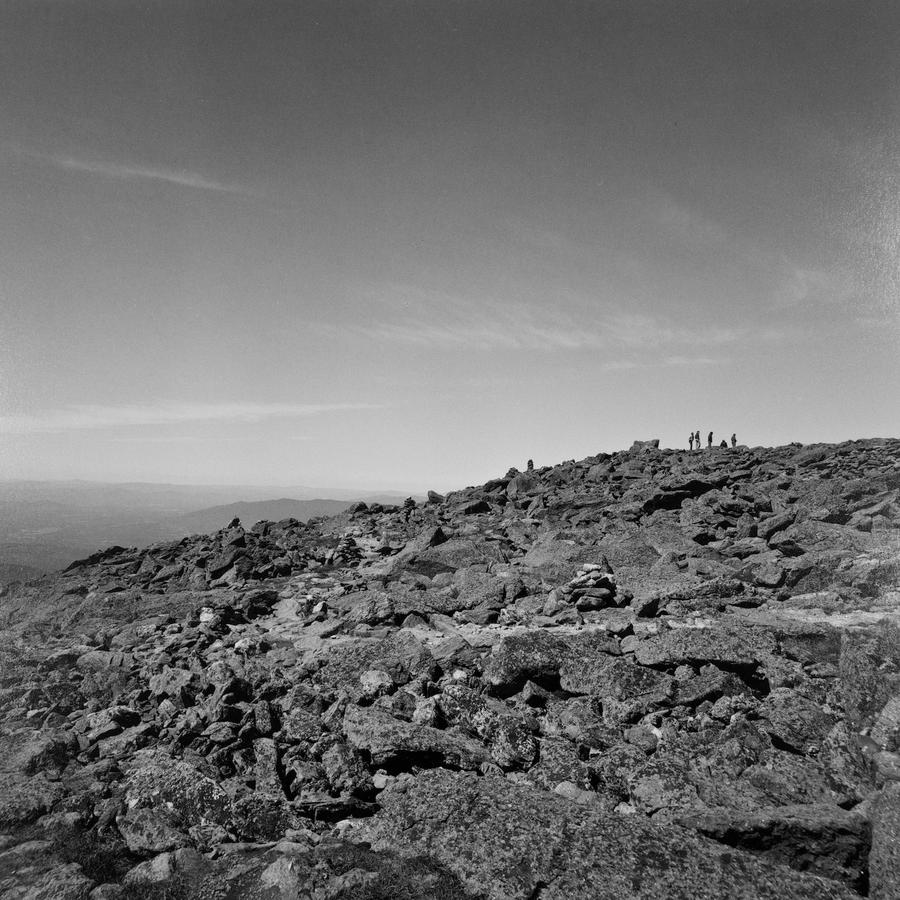 As the series moved on it began to reduce the people in scale to smaller and smaller. 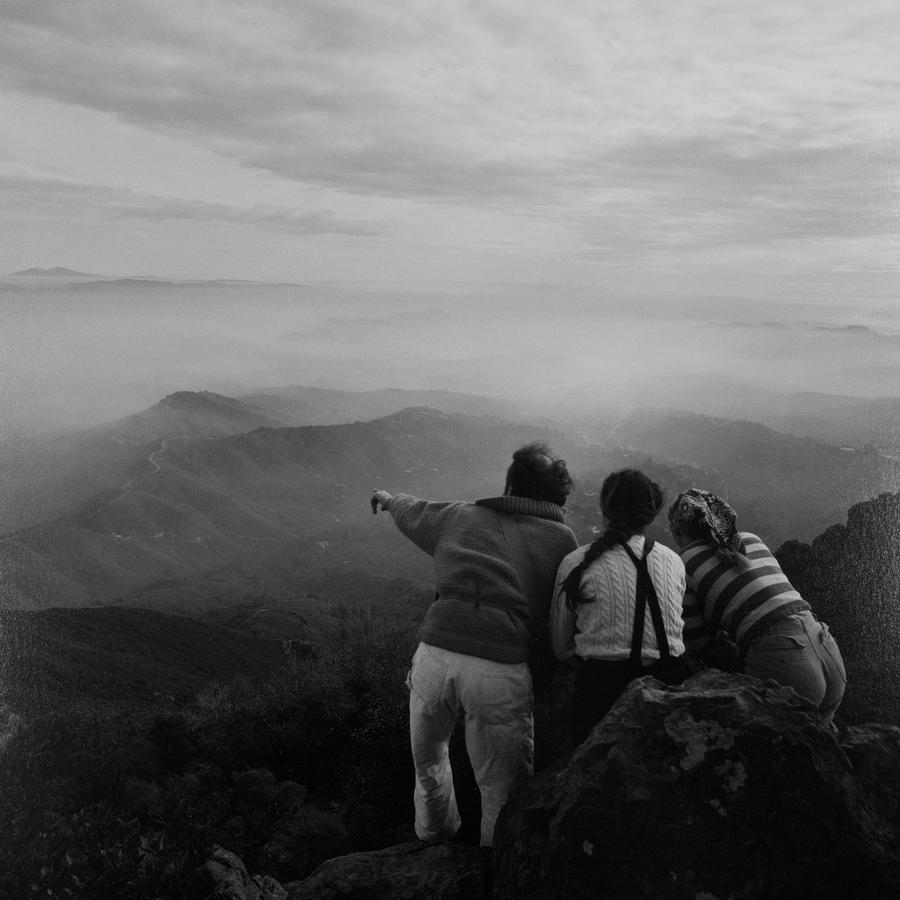 Then, in the next to last picture, the shock of three people, the largest yet, and an acute foreground-to-background range through the fog of early morning at Mt Tamalpais north of San Francisco. I always loved that gesture,  someone pointing off to somewhere. 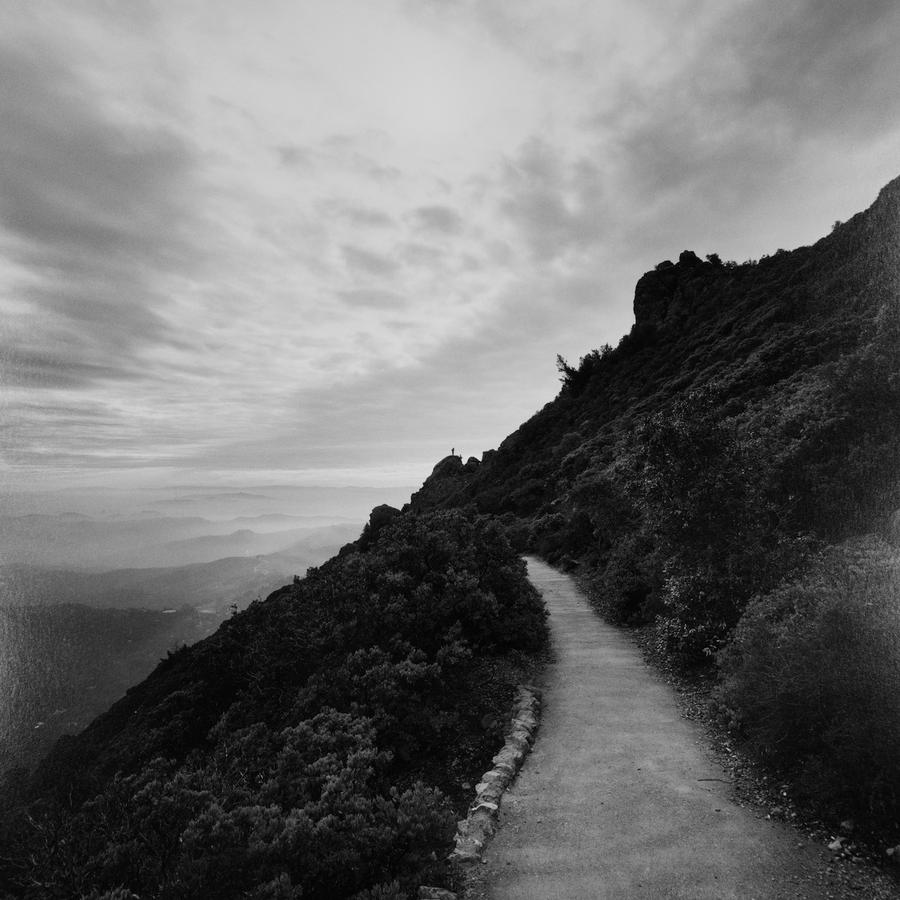 with the lone figure standing on the rock way back there, the picture bisected at a 45 degree diagonal.

The full series is here.

Let me know what you think, but please, take a look at the full set first.

Note: this is an extremely poor facsimile of the originals.Want to see the actual prints? This can be easily arranged through 555 Gallery, as they represent my work.

By the way, I made another Mountain Work series of pictures in 2011. They are here.

This is the original Mountain Work pictures, made in 1978 and 1979 in black and white.

The prints are mounted and over matted about 12 iches square. They were printed in an edition of 1.

They are signed in verso.