This is the third installment where I take a look at the first series I ever made called  Nantucket.

Picking up where we left off with Nantucket Part 2, Part 3 has us looking at things a little differently and working to drive points home with some repetition as well as comparing and contrasting as I wander the back streets of the island's one town. 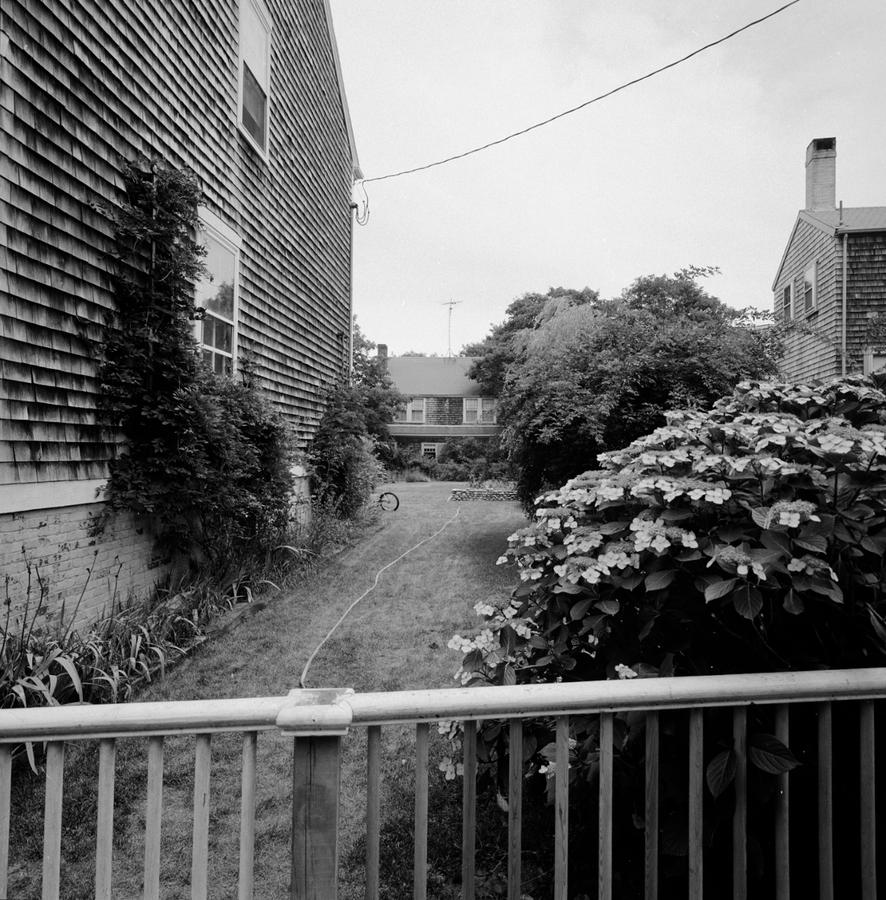 This one is a deliberate comparison to the first picture in the series with a fence pulling back in the frame. Here, the hose fills that position, seeming to be connected to the front fence although it is just because of where the picture is taken from that it looks attached. Also here the strong perspective of the house on the edge of the frame is on the left instead of the right. Finally, this is a much more open picture, with more sky that any of the others so far in the series. I read this as allowing us out more, or perhaps giving us a breather from the oppressive nature of the previous ones in the series which are predominantly closed in and contained. 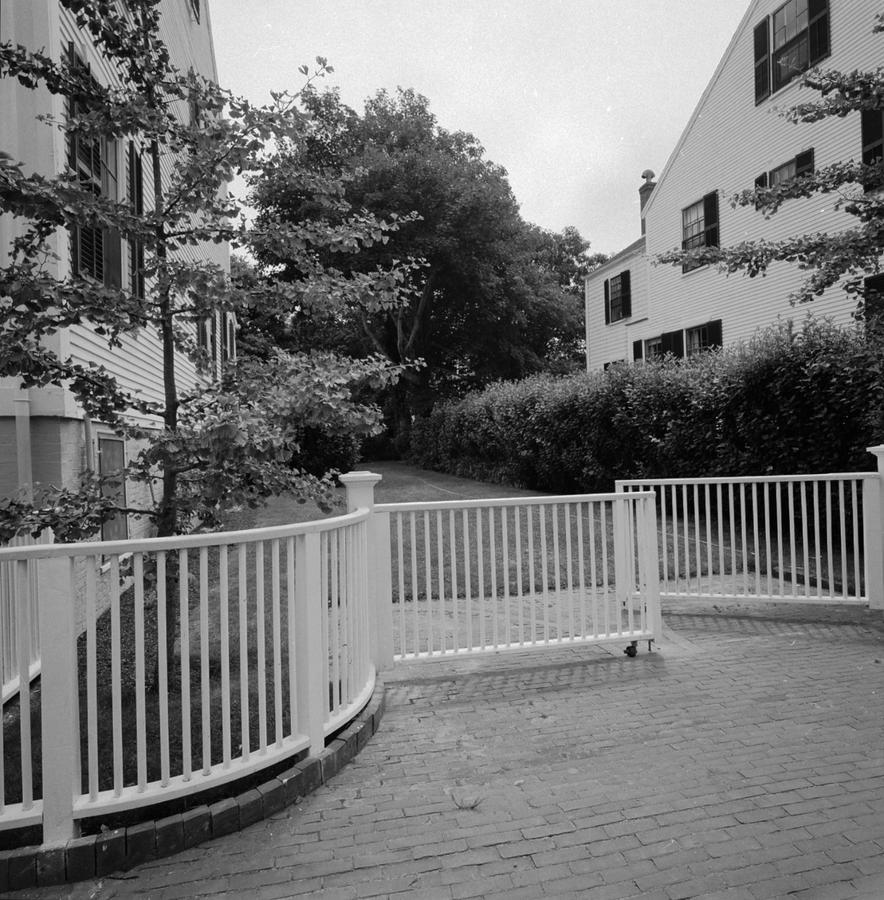 Clearly, in the way I took the previous one, this one and the next one, I am drawing attention to the nature of the fences, either as barriers to further progress or perhaps as gates through which one enters. This photograph does look as though it invites us in with the gate being partially open. But look towards the back. Is that a place you want to go back there where it gets darker? Notice how things are a little tilted or skewed in the picture. This is all a little unsettling. You go ahead back there if you like but I think I'll pass. 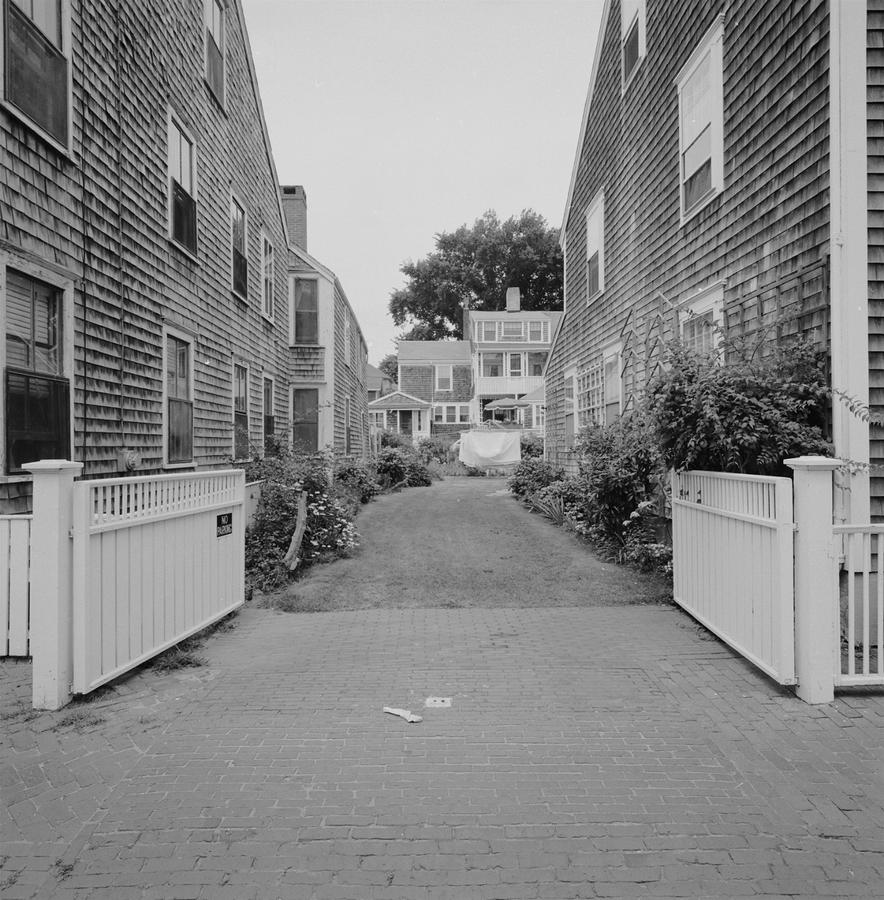 We're back here in the land of the light and this one even hints at activity and life. This is known among my friends and family as the "single sock picture" and makes a connection to laundry on the line, which is in back and to someone carrying it to hang on the line and dropping a sock along the way. The gate is wide open, inviting us to look back and through. This picture also mimics the structure of the darker gray one that is #3 in the series: two buildings, one on either side pulling back to form an alley. Lastly, look how light and open the image is. There are no dark shadows or mysteries here. 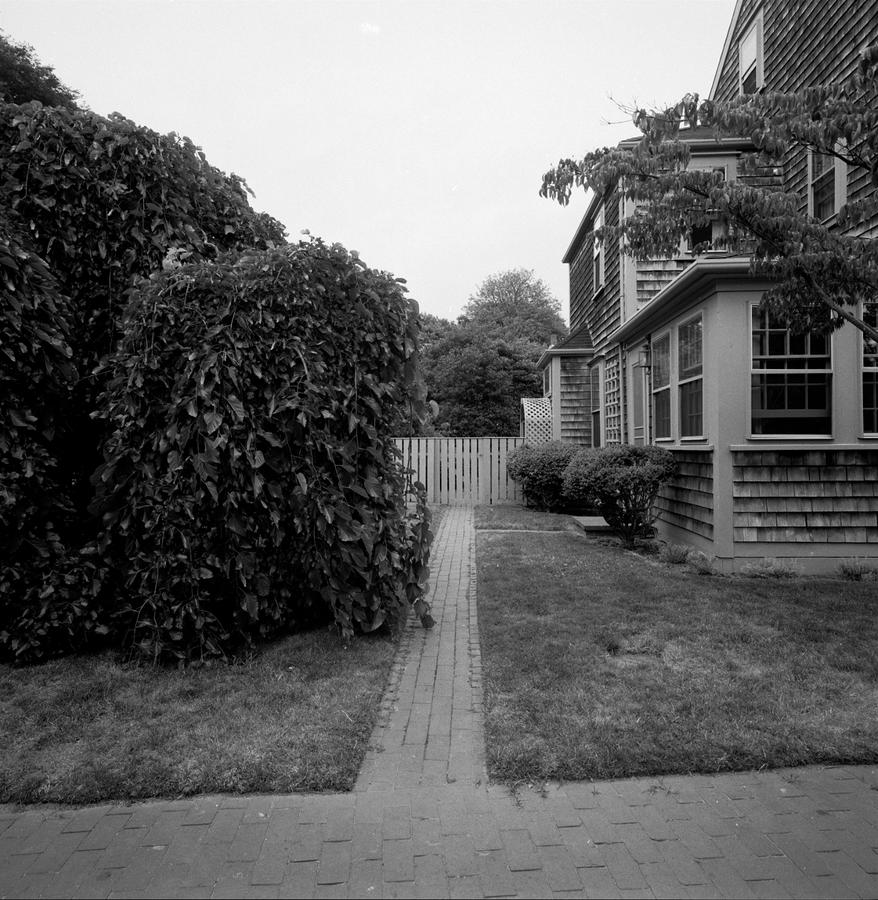 So, here we are already, ending my analysis of the third part of the Nantucket series with the tenth picture in the set and it looks very conventional.

-A brick sidewalk off of which a walkway goes back to a fence with a gate.                  -Three prominent visual elements in the frame: part of a big dark bush, part of a gray shingle home and a light gray sky.

Okay, simple enough. And relatively straightforward as a single picture, living on its own with no context. Boring, right? Now think of this picture in relationship to the others in the series and see if you remember it in the sequence we've been looking at. Hopefully you've come to this: Bingo! Bam! Yes! How can something so benign and reductive have any meaning at all? Because I have altered the structural foundation of this picture into a new paradigm in comparison to the ones that preceded it. I've found a fence that spans the frame in the mid background and I am pointing the viewer to it using the brick walkway like an arrow. Why? For just that reason. To indicate and demonstrate that, while there is a conventional subject shown, I am interested in getting the viewer to see it in a new way, to think of this picture in the context of the others in a kind of flow, to ask the viewer to relate to the work by seeing both the reality being depicted here but to also acknowledge the manner in which I have worked to alter its meaning through pictures placed before it and after it. Hopefully, you now can understand why this series is placed so high on my "series meter" and why I believe it deserves this much scrutiny.

Because it was the first where I made these realizations and connections.

Next up? Nantucket Part 4, of course.

Please know this: you may subscribe to this blog. That's the best way to get it as it will pop up on your in your "In Box" as soon as I post it. To subscribe, go to the blog and sign on in the column on the right where it says "subscribe". And yes, I will not write you any other emails or bother you in any way and yes, you may unsubscribe at any time.

Finally, feedback is welcome and appreciated. My email is: Neal

'Sconset is a small village at the opposite end from the town of Nantucket on the island of Nantucket in Massachusetts.
This project refers to both past projects and also to present practice. It is the first time I have combined black and white photographs with color photographs in a single series. The reason for this is that the black and whites are made the same way I made all the early series in the 80's and 90's: shot on flat gray days, usually of housing, square or almost square and very often with gray shingles with white trim.
The color photographs in the set are made the way I make series work now: using the longer thinner rectangle that contemporary DSLR's give, made with bright sunlight and blue skies.
The prints are on 22 x 17 inch paper.