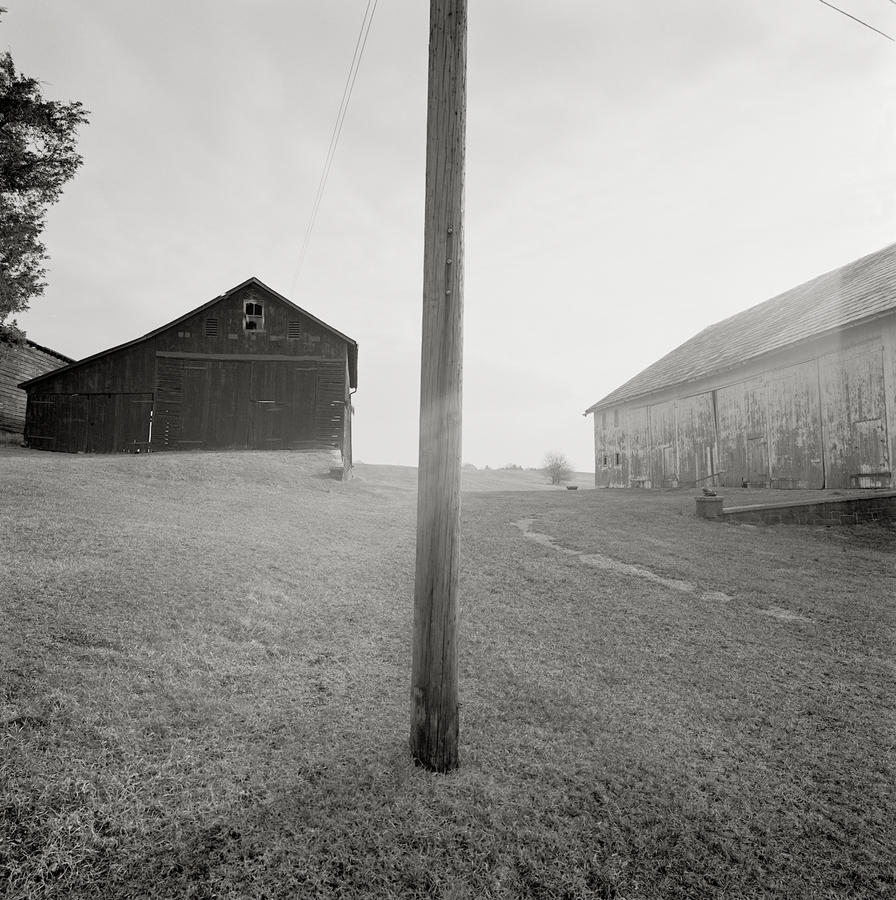 Light. There was light here, in the flare from the sun trying to break out to the right. As it turned out this was a failed attempt as it went back behind the clouds.

This is the third post I am writing to analyze the series called Hershey, PA, a group of pictures I made in 1997.

I use lens flare sometimes to connote something surreal or to draw attention to the act of making a picture using a camera, as opposed to this being a literal rendition of a place. It is not. It is an artist's interpretation of a place.  Flare is stoppable usually, by throwing a shadow in front of the  lens. It is what a lens shade is for. Sometimes I'll make two, one with flare and one without and then decide later which one to use.

This is a "hinge" picture in that it is the last time we'll refer to the pictures in the series that are the ones of the barns that were black in any kind of substance.  The barn on the left is the same one we've seen before twice, cut in half. The tobacco shed is over on the far left of the frame, there as a token only, not to play any major role in the photograph.

Once again this picture seems to hint at a way out in that way back there in the haze of the flare is the horizon and it is clearly open country. And, even though there is this big pole in the foreground, it is there to split the picture, not so much to act as a barrier to our progress through to the background.

Last, the building on the right is certainly the same barn we saw bowed out in the previous frame, seen here from the side and the object over there on the wall is closer and perhaps a little better defined but still not front and center. That happens next. 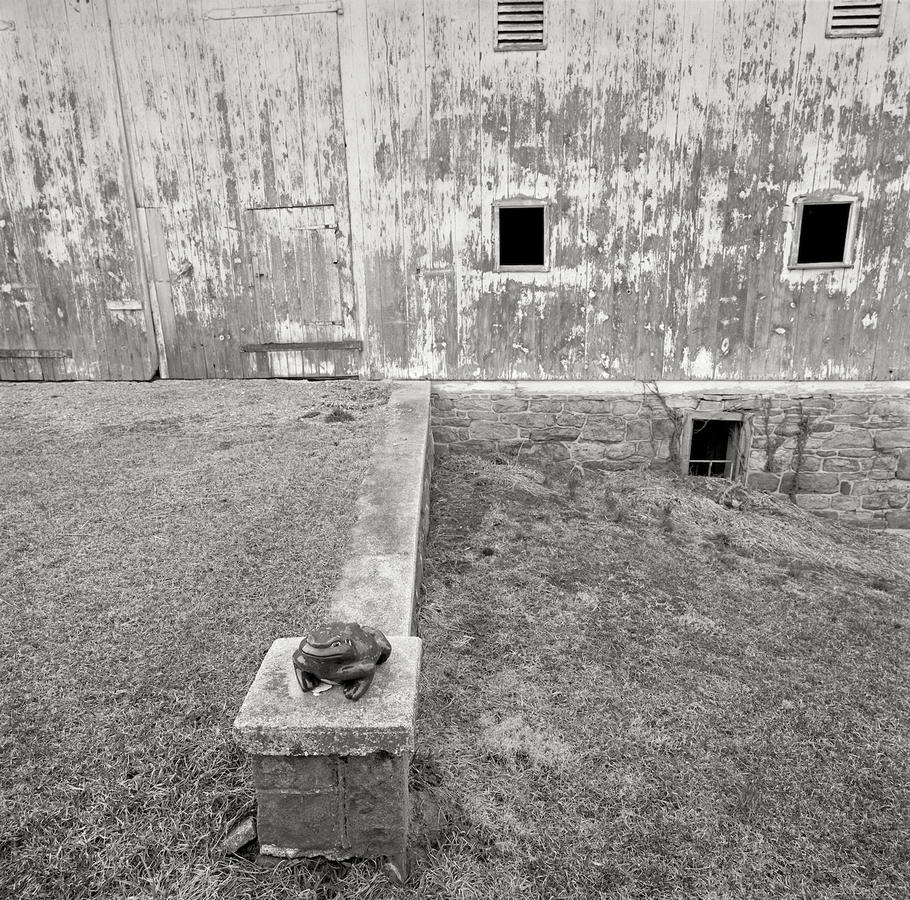 Ribbit. Yes, it was a green froggy. I remember thinking as I made this picture that I probably wouldn't use it. It was too ridiculous in a series like this, where the theme had been sobering and severe, that I couldn't get away with being flippant or light in this context. It would be like farting or belching in church, irreverent. But I did end up using it and it remained in all the ensuing almost 20 years, through shows and presentations and lectures. I like the contrast of it, the sense that we shouldn't take ourselves all too seriously. Why include it? Because it is so incongruous. To me, it tells me that there has been humanity here. Someone had to have placed it there. And I love that. The picture is not without portent, however, as the three windows open to a space that is about as black as black can be. Do you want to open the door to that barn on the left and walk into that space? Not me. Finally, the picture is one that has given us a break from the others that are the main content of the series, a breather, in effect. If you look at the series Nantucket or Portland or Yountville I didn't really do that with those.

Let's move on, as there are three more in the series. 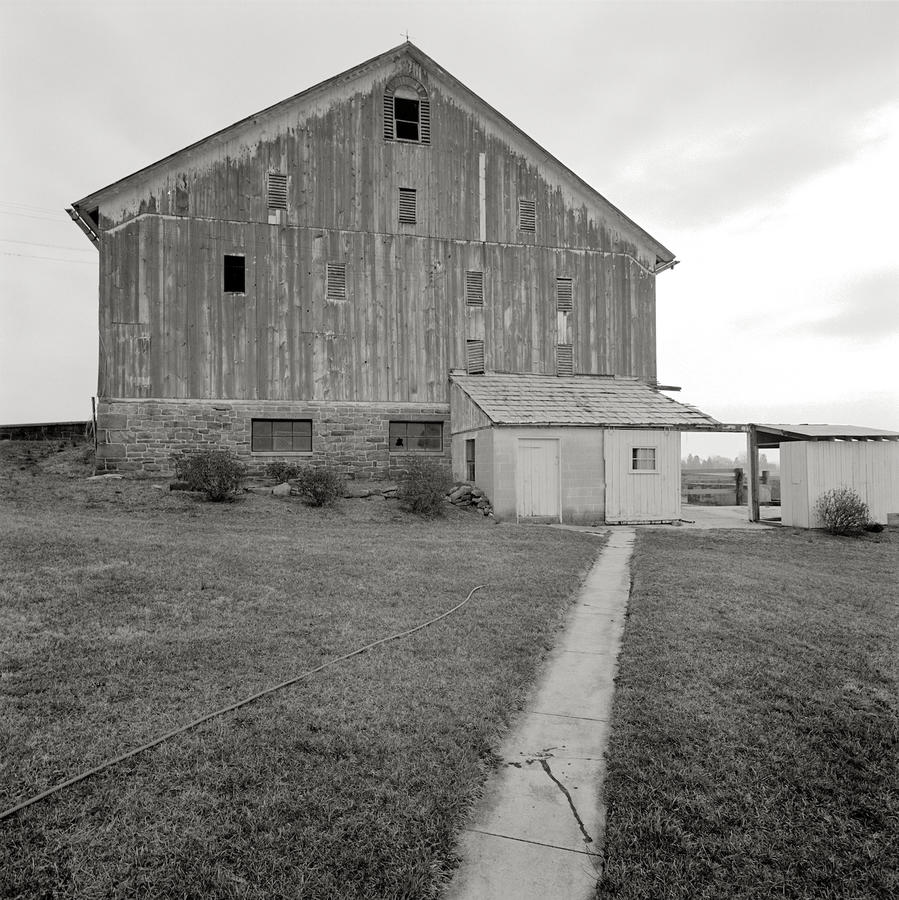 Back to the barn, shown a few frames before. This time rendered straight and not converged as well as showing real integrity in the structure, its function prescribing an elegance. Besides not being willing to leave it so distorted, it is now lighter, not here to just present a bowed out form but to display its texture and surface. The hose reappears for the third time, although it is playing a less critical role and the concrete walkway is here less to divide the frame and more to lead us into the space. Finally, no green froggy on the left as I've moved on and am trying to bring us back into the series, and yes, it's true, it's somber tone. 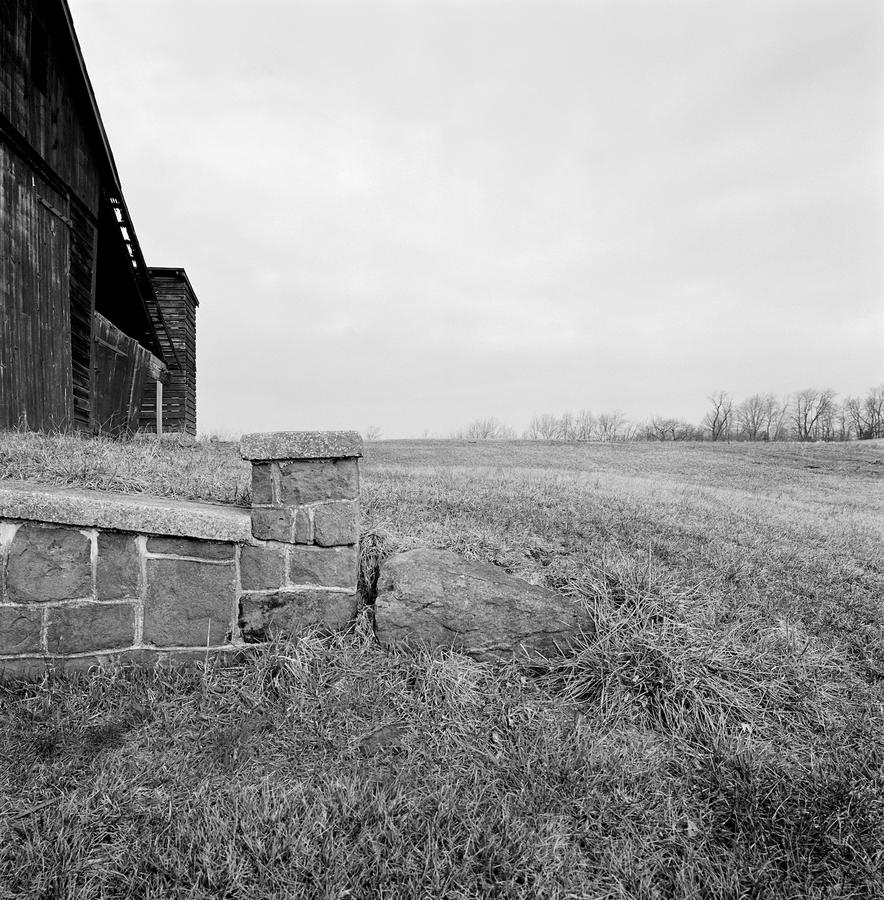 Next to last. I have brought us back around to our two black forms as an homage to where we were earlier, but now on their back side, as thought we can leave them behind. I like to think of this as a partial completion of walking along the edges of a cube and here we are on the third edge, with the cube on our left. We also have a whole lot of open frame: field, trees and sky in this picture. In some sense we are already out, no longer having to deal with all the heavy stuff contained on our left. For much of the series, we've been on the inside just getting  glances out to the horizon. Here, we're on the outside.To my way of thinking this is a strong statement of being out, of escaping the more difficult and challenging place we've just left.

Did you have recurring dreams as a kid? I did and the one that this picture refers to was me, riding around the circle of my friend CP's driveway on my tricycle by myself, happy and ignorant of what's going to happen, when the right rear wheel of the trike comes off and flies off over the bushes behind the stone wall.  As I get off my trike and walk over to the wall to retrieve my wheel from the very black bushes behind them I hear a really terrifying growl back there. Each night in each dream as I gather up my courage to get my wheel back, as I get closer the growl gets louder. And each night, of course, I wake up, knowing that this will go on night after night. I'm only about 6 years old but I am trapped in a kind of loop. The barns on the left are definitely someplace I don't want to go and, to my mind, the open field represents freedom and yes, even light as in giving life.

I have to butt in here, close to the end of three posts about this 13 print series, to make a key point. The way I've been writing about this series and many many others of mine is to share with you my sense that these pictures are so highly connected with each other as to be inseparable. Over time, that's how this process has evolved for me. Another way to explain this is to approach it from the aspect of training over a whole career. Although I certainly make pictures that do not directly connect to each other in a sequenced series, working in the manner of the Hershey pictures is where I live as an artist, simple enough. Harry Callahan said that he believed we really only made one picture in our life time.By that I presume he meant that we could only speak as artists with our own voice, that, at its most foundational level, we simply need to be true to ourselves. Easy to say, hard to do, but working in series is, fundamentally, my one picture. 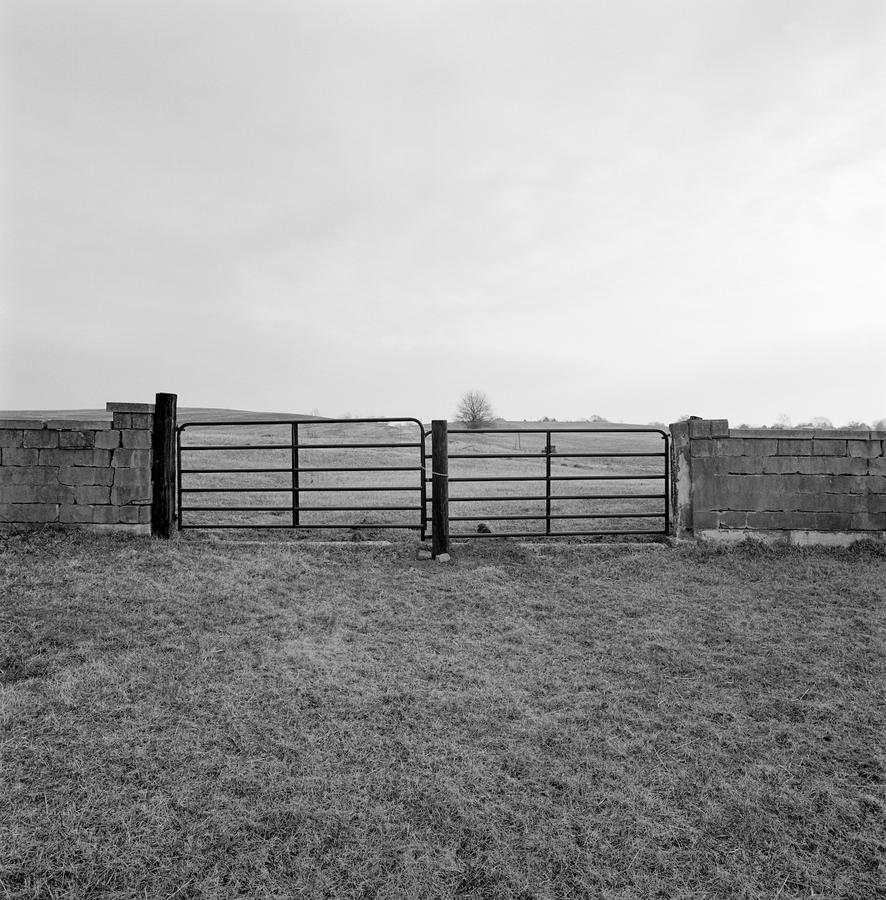 This last one sits in a strange place for me, simultaneously containing but also allowing a visual look at what lies behind the gated fence. Why is it here instead of the previous one being the ending photograph? I think of this photograph as being enigmatic in that it presents a choice, with no answer apparent. To walk up and open the gate to freedom or to remain held in, knowing that there is a whole lot of stuff back there over my shoulder to deal with. Simple enough, really:  go forward or go backward?

That's it, the Hershey, PA series. Prints? Yes, they are about 12 inches square, made in darkroom days, pre-digital, although the negatives are scanned now and the work has been shown as inkjet prints as well as gelatin silver. The originals are priceless, at least to me, but may be seen through 555 Gallery in a response to your request, although I don't know that we will permit your handling them.Vintage series like this do not get split up. Purchase requests must be for the whole series. However, I  allow individual prints to be sold as inkjet prints made from scanned negatives.

I hope you've enjoyed these three posts. I know they take time and study, as I refer to other work and link those to the one I am discussing. Hopefully, you're willing to do that and that you find relevance in the process.