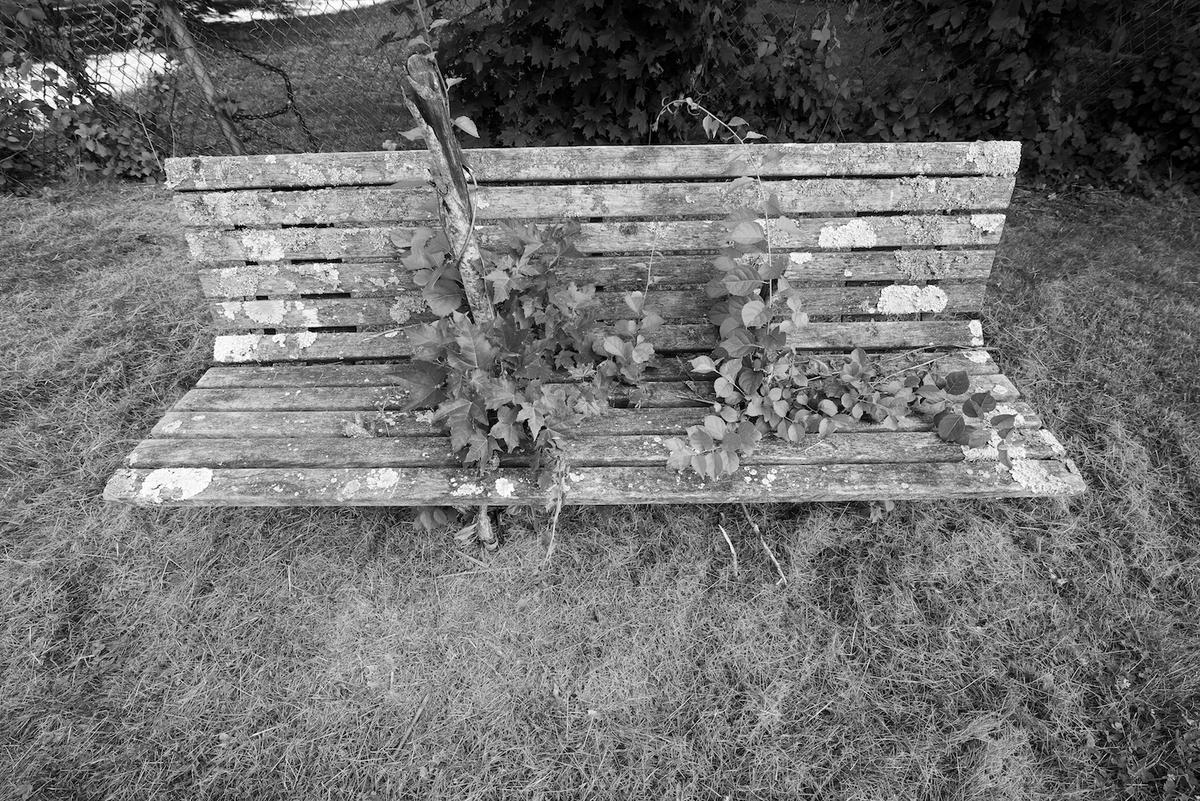 That's a tree growing right through the bench. Medfield, MA

Last week I wrote of a group of color pictures made in the town of Marion, NC in 2014: here.

I thought it might be a good idea to take a look at a black and white project as a comparison. For I still do make pictures this way. From when I started with photography in about 1970 all my work was in black and white. It wasn't until I started to work digitally  in the early 2000's that color came into my practice. I can't forsake black and white for color always. Love color, love black and white. Room for both. 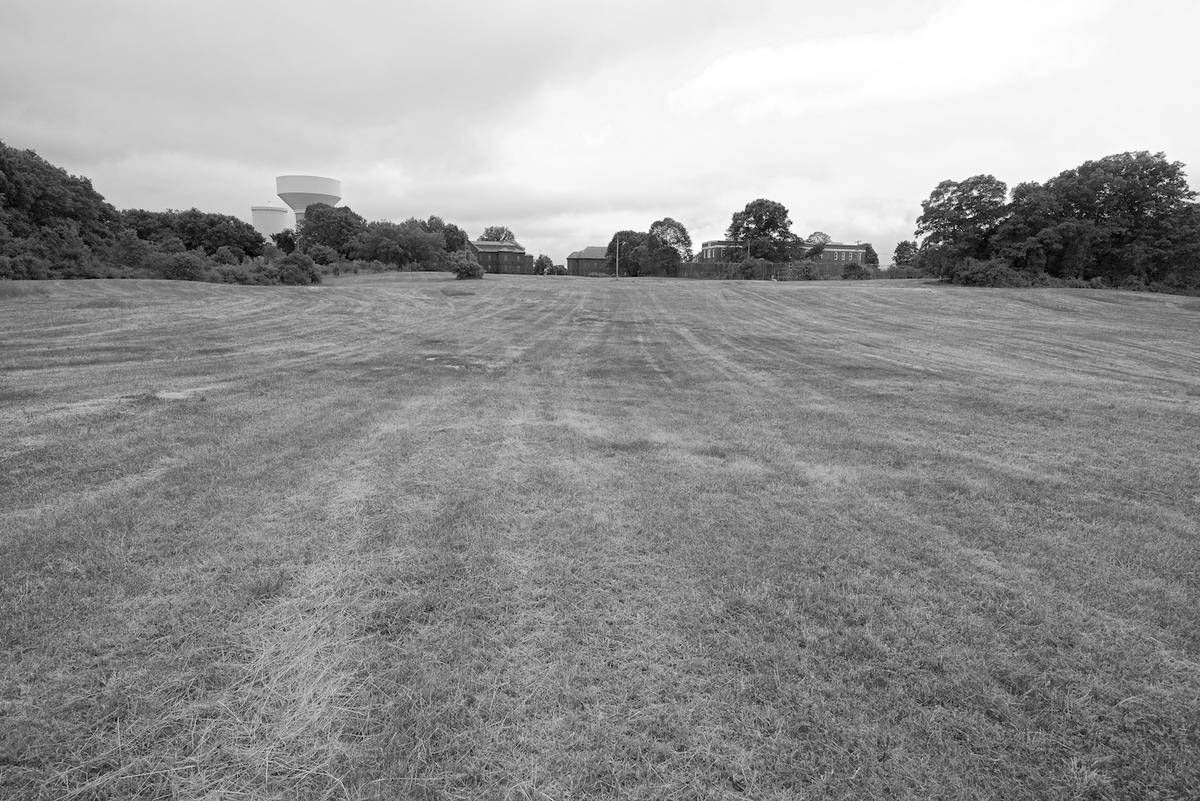 In the unfolding story of the Field it takes nine frames to get here, the first full view of the field itself, a long introduction in a series that totals 19. The series is here, in sequence. I also wrote a blog about the Field series shortly after I made the prints in 2016: here.

I made the Field pictures a couple of summers ago, not quite on impulse but I     finished them in a few days. The photographs are from the State Hospital in Medfield, MA which is no longer active and is owned by the town. I have photographed that site on and off for many years. But once I walked out to the field itself it was clear I'd had no idea. It was like a cathedral: a sacred space, open, with the sky a magnificent fresco overhead.

These two images, above and below, where my device is simple, first a look up the hill then, 180 degrees turned, the second down the hill. These two pictures form the core of the series. 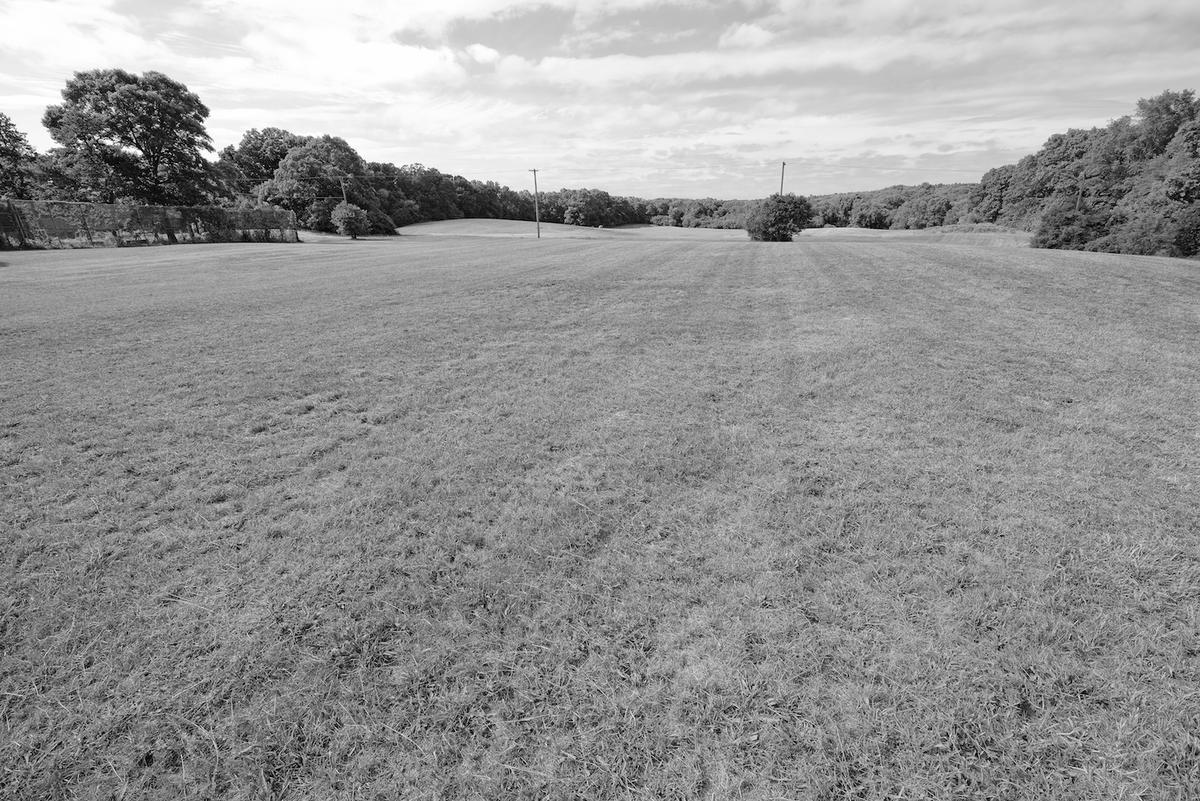 After the first day photographing, I looked at the files that night on screen, knowing I'd make work that would count, that would hold over time. It really is like that sometimes. Hitting me over the head with it. But the series was in no way complete. So, I went back out again the next day. For instance, I had found the kid's bicycle with no rider the first day but didn't shoot it until the second. Why? I hadn't understood the implication of the bicycle and the back story implicit in it sitting there day after day. 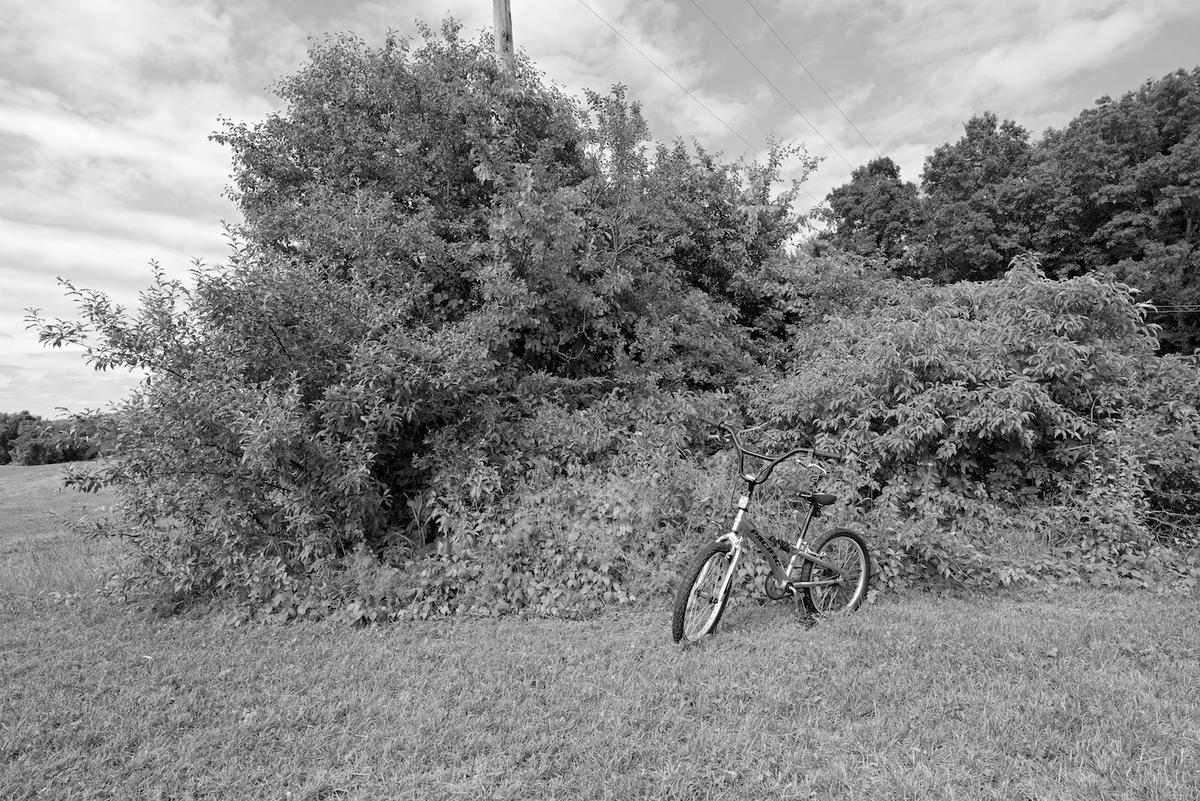 But why # 19? The last in the series. Why come back to this bench? And why is it now in color?

I offer that the bench is, in effect, home plate. While it speaks in both pictures to time and disuse it is a place you come back to after being out in a larger sphere, having explored other worlds, running the bases, awareness increased, understanding deepened. That was what the field was in this case, open but enclosed by a gallery of foliage  that was dense and containing, the field itself expansive yet very intimate. Its borders, its edges, its perimeter exotic and wholly different from one side to the other. Yes, this is landscape photography, but serving as a way into a more internal comprehension, the external reflecting us to ourselves, an effort towards a better understanding of our place in the world. 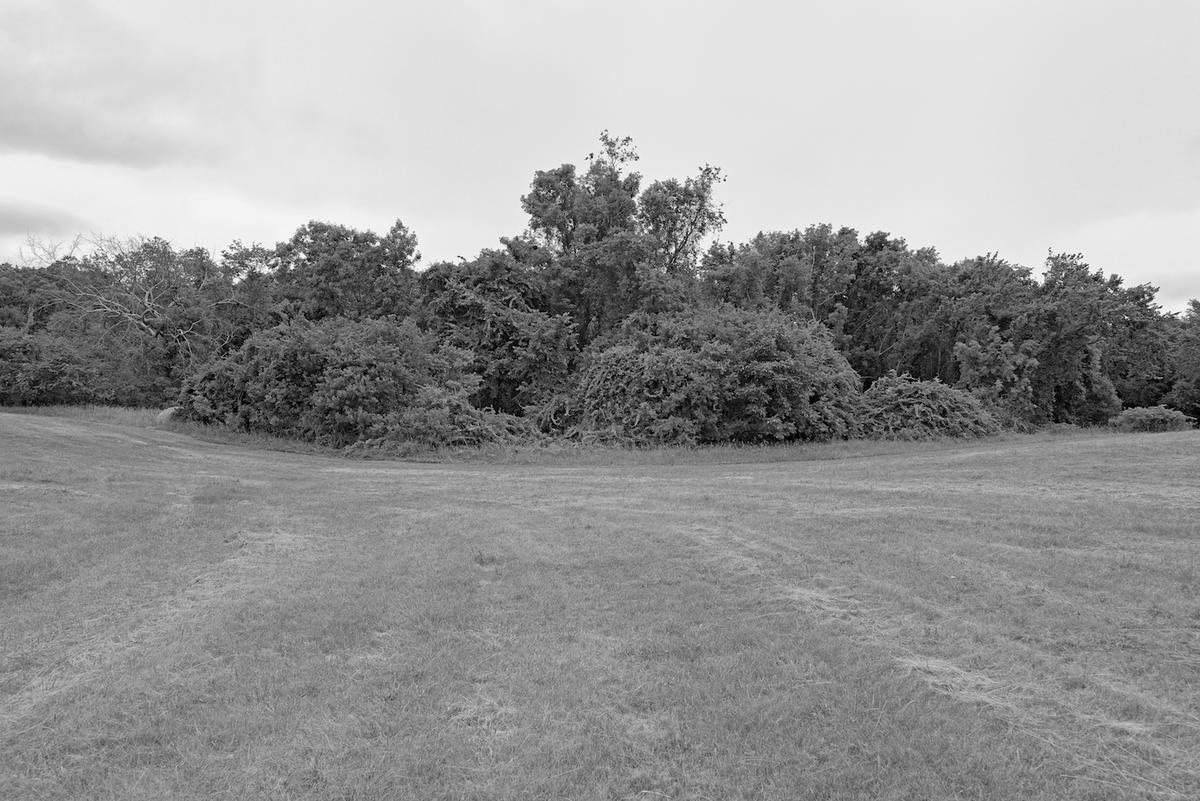 The whole series in black and white, analog-looking but actually digital, rendered in soft grays but below Zone V, more in IV's and high III's*, then the bench twice, starting with the first frame wide angle at 14mm and ending in #19, the last in the series, in color, at 130mm, the exception to the rule. Why? The same but different, something I have used many times before. Full circle, the beginning and ending are the same but different, seen with a changed perception in effect after running the bases. For I, the maker of these photographs, had been changed after making pictures in that field for several days. I found a more simple, pure place, an oasis, this field farmed for years to grow crops to provide food for patients at the mental hospital up the hill from the  1870's -1970's. The stories this field could tell. The place positively resonating with a past we can only imagine.

By the way, if  you are reading this blog on a Mac (I don't know if his holds true on PC's) if you hit Command + on your keyboard a few times you can enlarge the photographs seen here.) 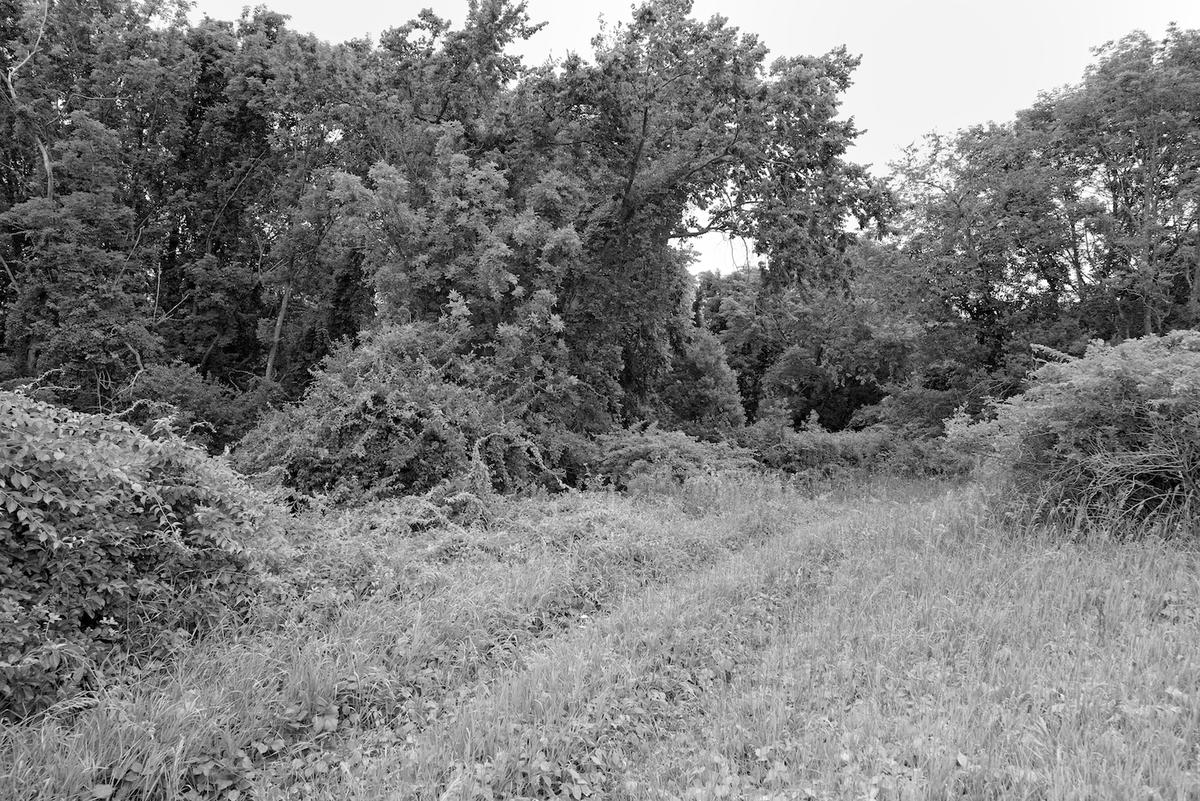 * These numbers refer to the Zone System, announced in 1940 after much research by Ansel Adams and Fred Archer. This is a way to control exposure and developing in black and white, a two part regime of specifying exposure and the processing of the film to determine the best possible outcome, a full tonal range in the final image. Although in digital capture we don't use the Zone System in quite the same way, the principle of  controlling exposure by "placing" the    tonal values in certain "zones" still applies.

Head out to Medfield, MA right through town and out to the site of the Medfield State Hospital, drive right past the incredibly beautiful red brick buildings of the "campus", past the old and new water towers to the back side where there is a huge field. Read more