I flew over the Imperial Sand Dunes in Southern California again a couple of days ago. I had shot aerials there about this same time last year. Why photograph them again? Read on.

It's a good question and raises bigger issues than just another hour of photographing a year later.

As always, I will provide a little background and context. Last year the Dunes were a discovery of major proportions for me. They are 48 miles of dunes that reach from not far from the Salton Sea all the way down into Mexico. Much of the dunes are accessible via off road vehicles by permit. As we who live on the coasts go to the beach, people in this area go to the dunes. Weekends are frenetic and can be quite dangerous as all types and all ages with all types of all terrain vehicles criss cross the dunes, sometimes at great speed. People are killed every year. And these vehicles leave tracks. But, just as the wheat fields change due to the seasons the dunes change due to the winds. The area is known to have sandstorms and this scrubs the dunes clean of tracks and moves the sand around, just like snow drifts. Last year I made pictures in and of the dunes every way I could figure out. This included parking and walking in a ways, going out in the dunes in a jeep, flying over them and even renting an ATV for a day, trailering it in and driving it up into the dunes. The pictures that came out of that effort are here: Dunes 2012.

This year I just made pictures from above: 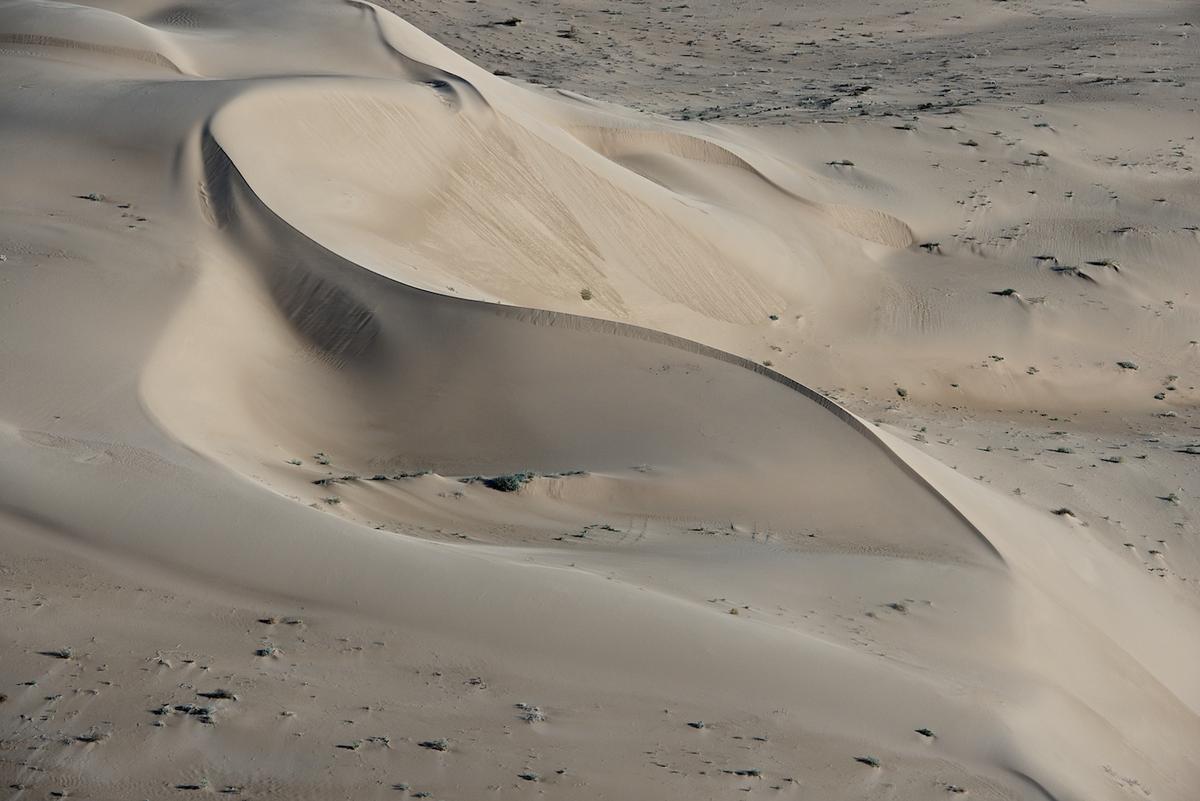 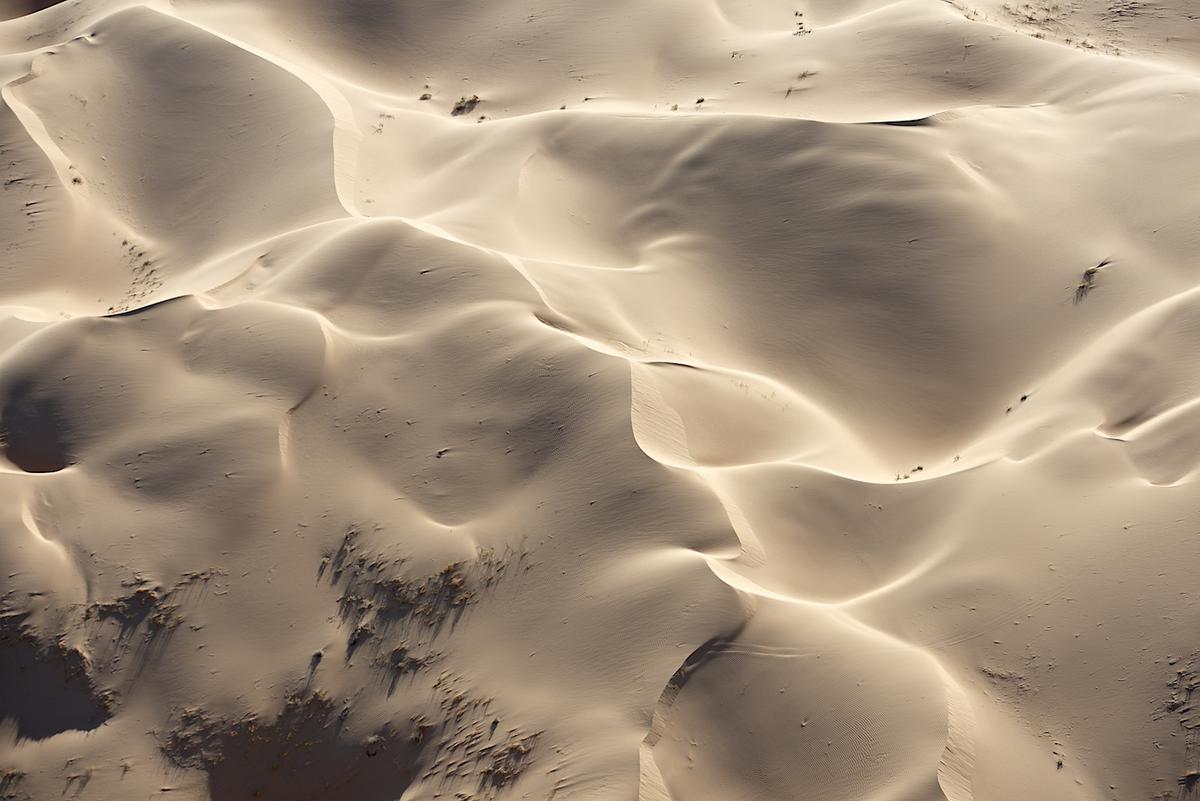 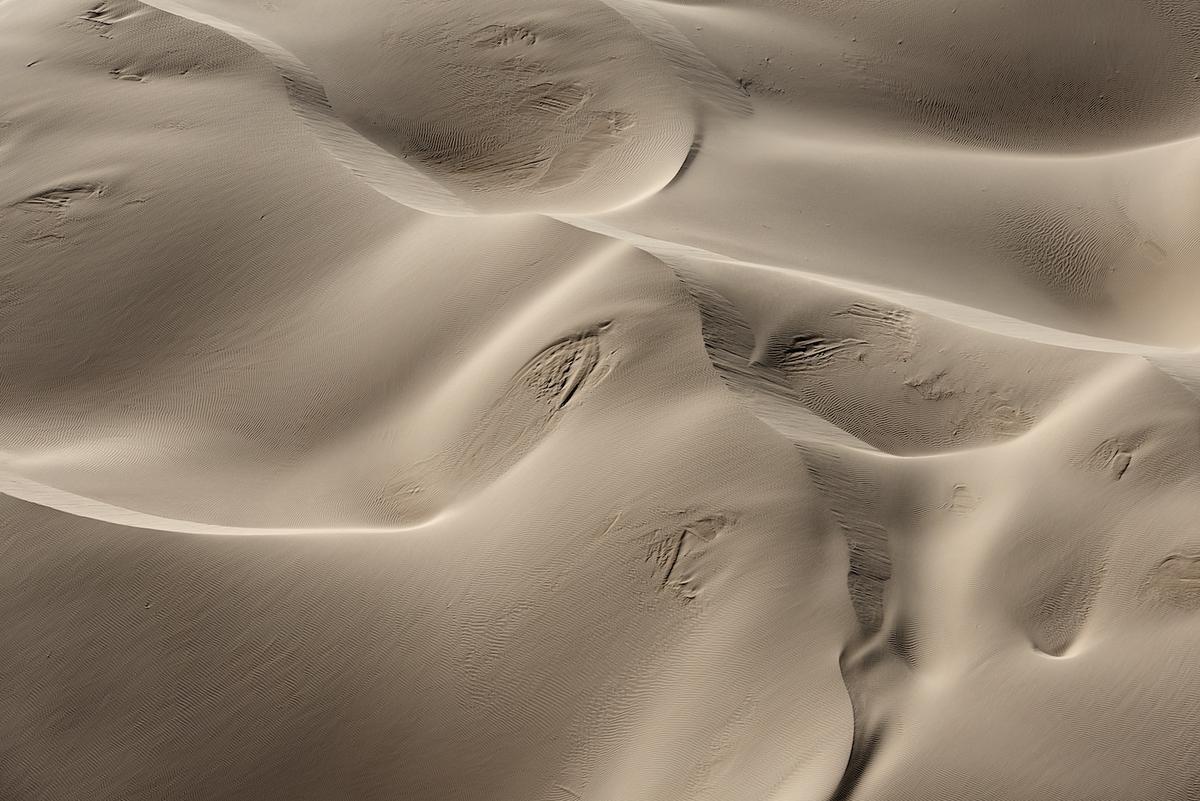 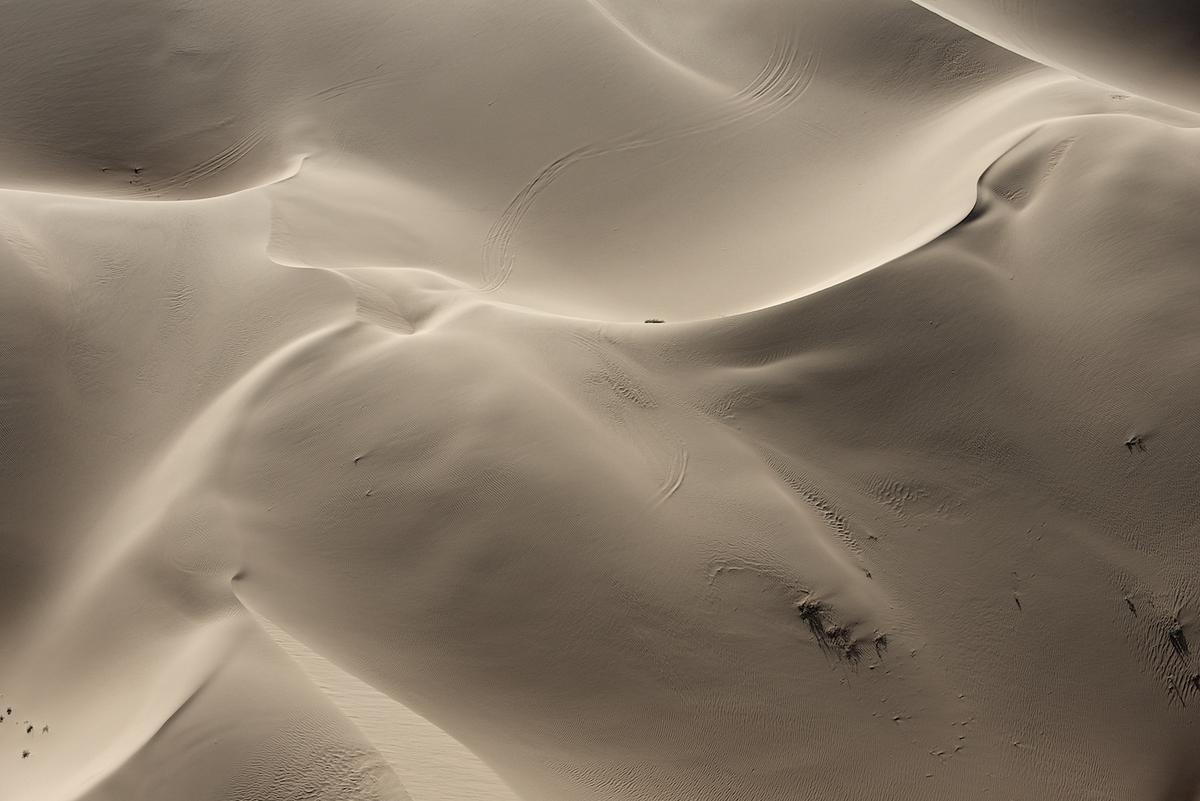 I wrote earlier (Aerials) about how to photograph from the air and won't repeat it here except to say that it is intense and I was nervous before flying this time as I am every time. 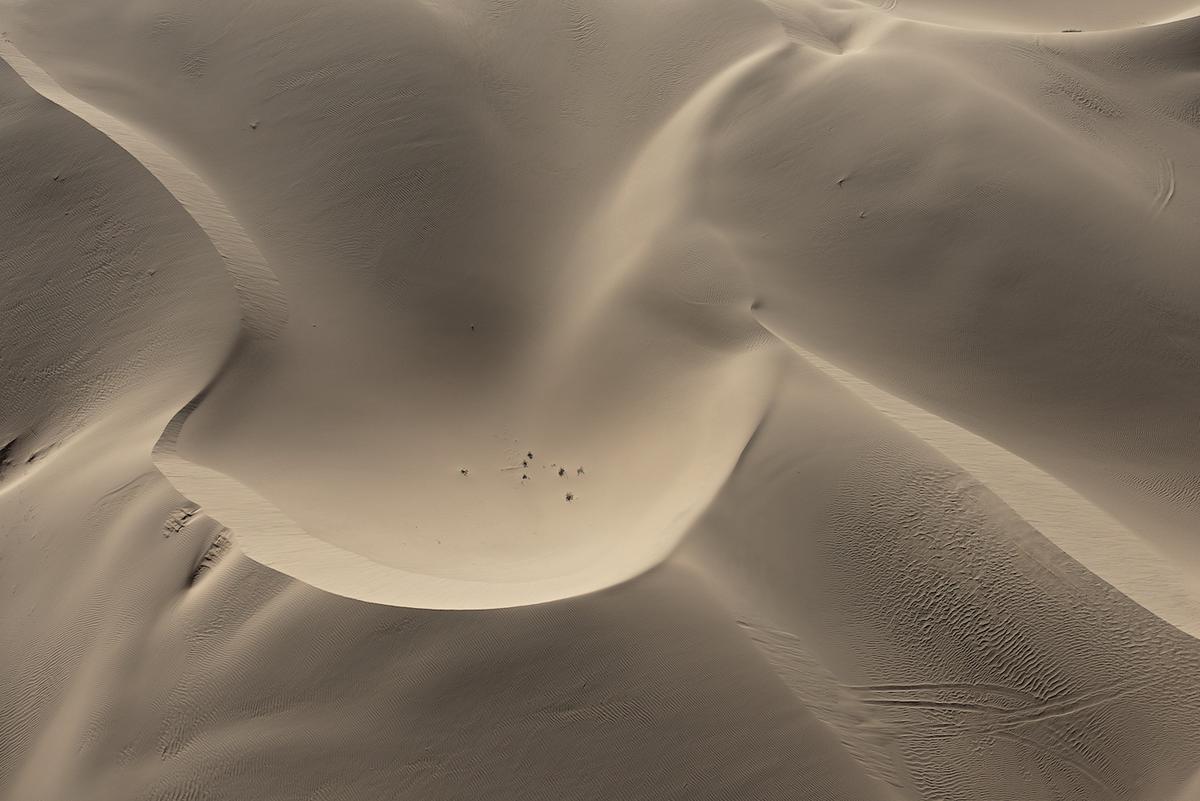 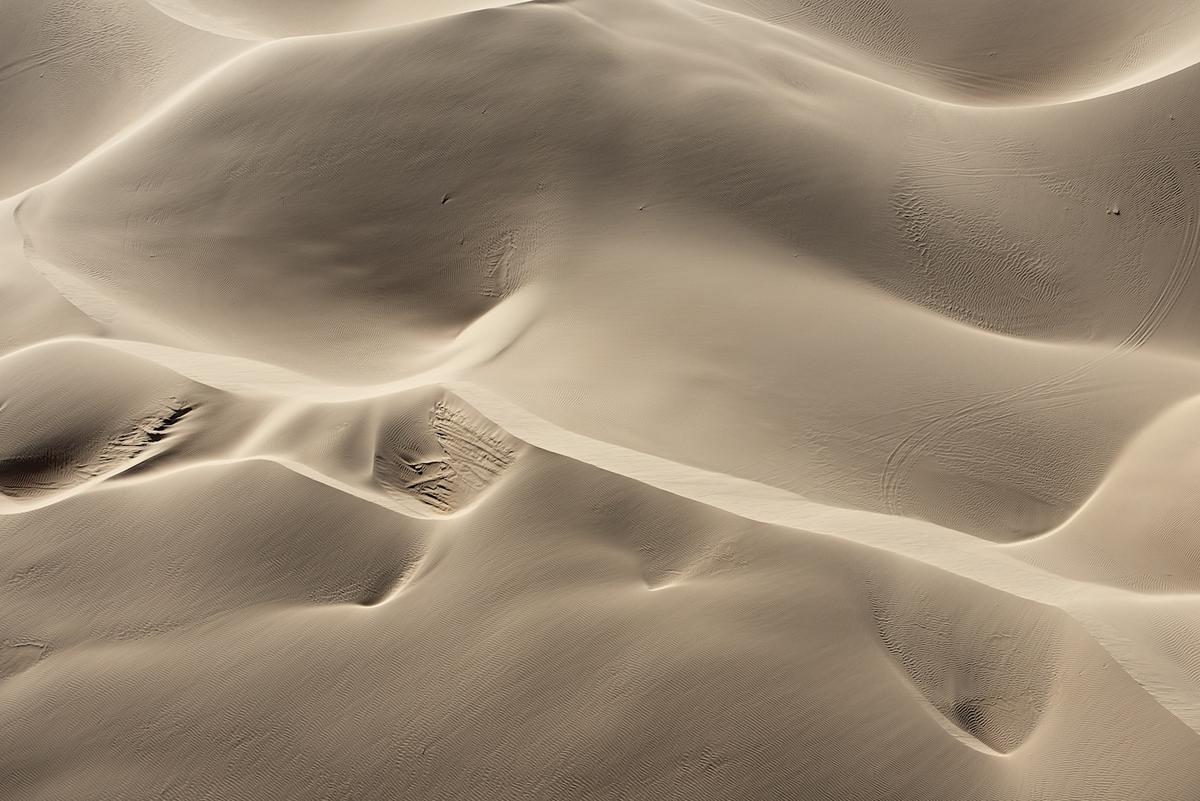 So why photograph material again that I just photographed last year? Because there was more to do. Each time I fly to photograph, it is just one hour. This is a cost thing and a "how much can I possibly do?" thing. One hour is really short to make a substantive body of work and there was no way I got it all in one hour last year. So I felt as though it needed more attention and hoped many variables would come together and lean in my favor this year to make a contribution to last year's body of work. Secondly, I wanted more file. I used a different camera this year and the newer one makes a bigger file. This after I've preached that the camera makes little difference? Well, it does if you believe the image needs to be printed large and well. That is the case here. 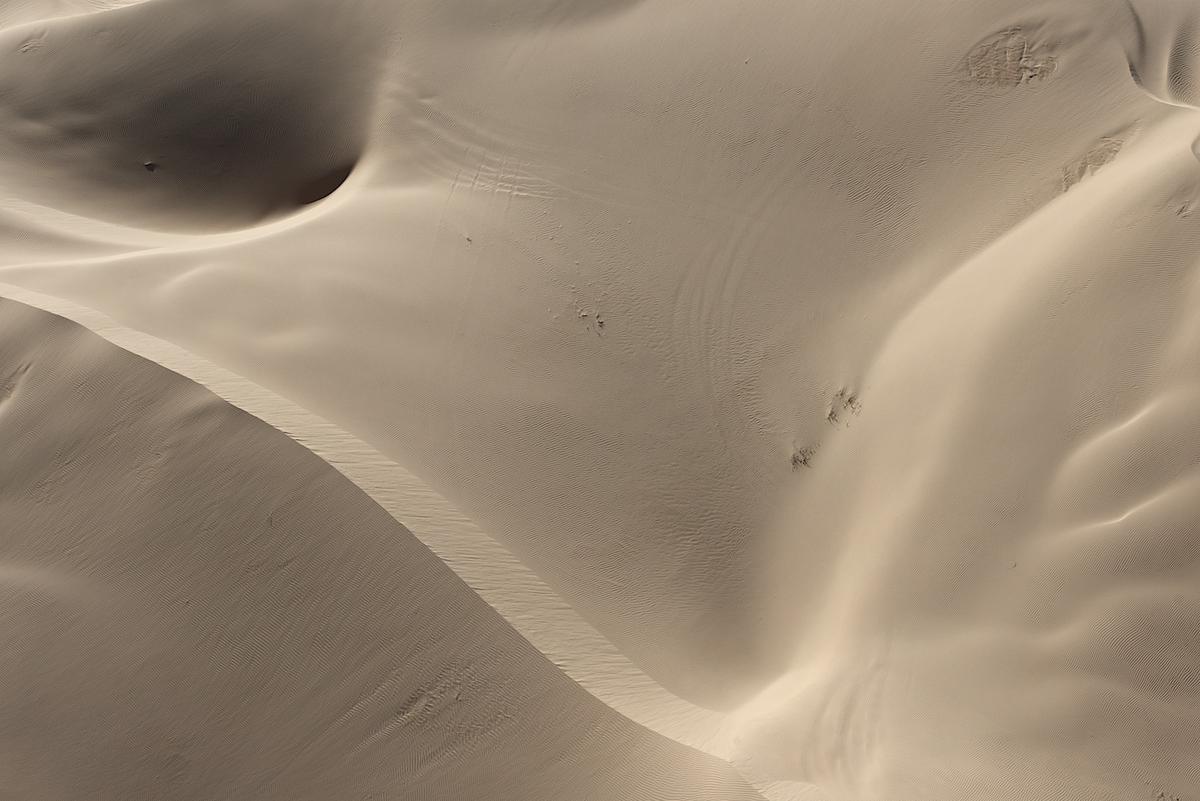 The larger issue is when do you know that you need to go back and when do you know you're done? Gut, intellect, research, some serious looking over what you've done, seeking advice, showing the work to others, letting the work settle a little in your estimation of it and being in touch with your feelings, i.e. is it calling you? Do you find yourself thinking of being back, thinking of what else you might do, how you might add to what's been done? There it is.

Over the next few days I am going to shoot out several more posts as, believe it or not, I've got too many back logged entries waiting to go out. Hang on and remember no one ever said you had to read them all. I know I know these retired guys with so much time on their hands. Well, I am not so very much retired yet, am I? 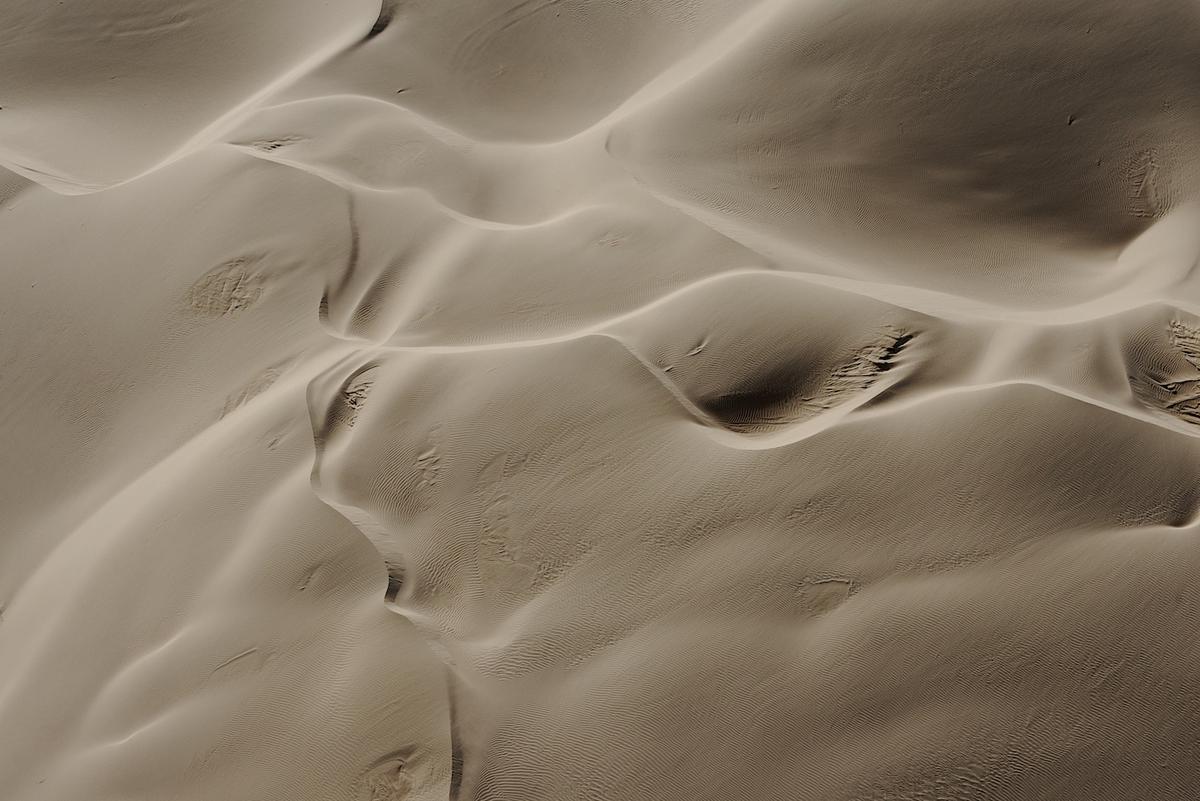