This is the fourth Southwestern series I've written about and the last from the time period of the mid to late 90's.

The full series is: here.

If you liked the others, Chaco Canyon, Bartlett's Wash and Moab then you 'll like this one too. If you didn't then you have one more to suffer through.

Bluff is a very small town on the southern edge of Utah in the southeastern corner of the state below Moab. It is mostly rock. I found these pictures while on a driving loop that was long and hot, stopping in Bluff to relieve myself but also on the hunt for pictures. I pulled over and took a short walk up a tight canyon far enough to see that I would need to climb to get to where the petrogylphs were. I'd been told back in town where to go. I went back to the car to gear up. In those days several rolls of Plus X  2 1/4  film on a belt pouch, a Pentax Spotmeter on a strap around my neck, and, in this case, hiking boots for traction that were also better protection if there were rattlesnakes, bottled water and a sandwich bought in town shoved in a backpack.  No tripod needed here as it was bright sun. Finally, a note on the dash of the locked rented car saying who and where I was. And, oh yes, the Hasselblad Superwide in my right hand.

Climb up to a ridge, traverse it, then climb again over a small lip to higher ground that was like being on a plateau. 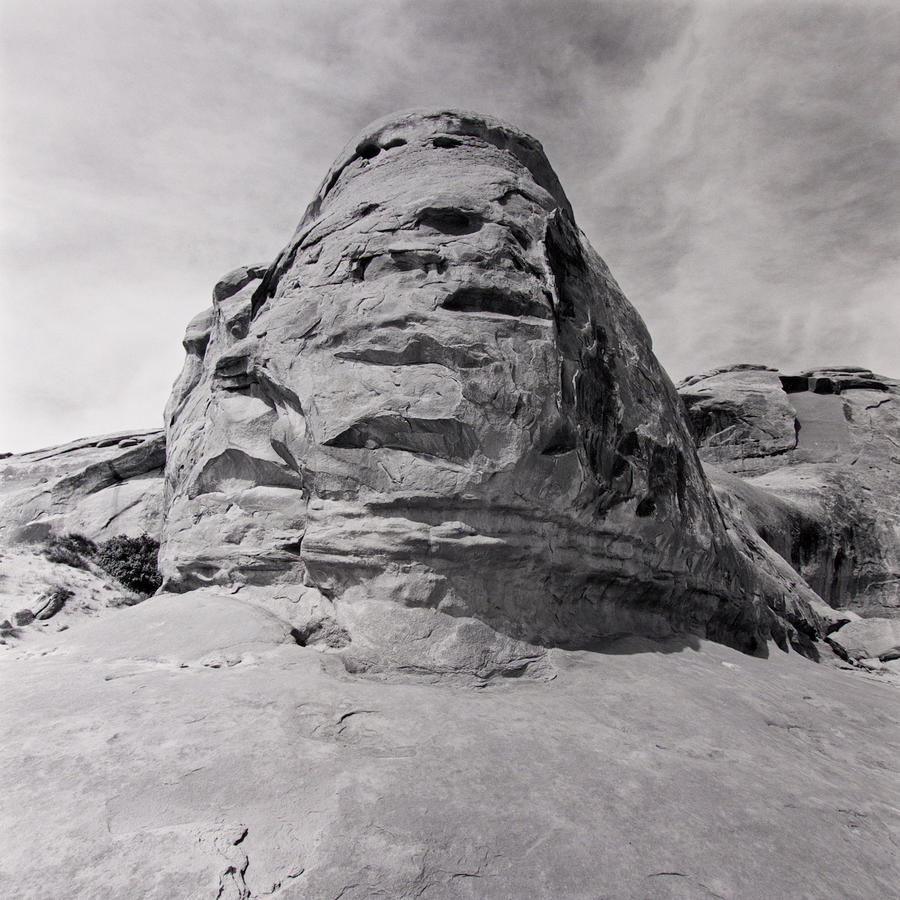 Let's pause here as presumably we're going on to more incessant pictures of rock and sky made in the American Southwest. All true. We are. How can someone do this? Stand in front of some rock in a barren landscape of rock and point a camera at it and trip the shutter? What possible reason would there be for doing this?

Presumably, we're going somewhere. Whereas a single photograph might be nice,  it would really say very little. But put many together, take us somewhere, give us a narrative and the sheer reductiveness of the landscape might actually be used to make a point or to at least convey a broader and deeper sense of place and, in this case, the special nature of this place. 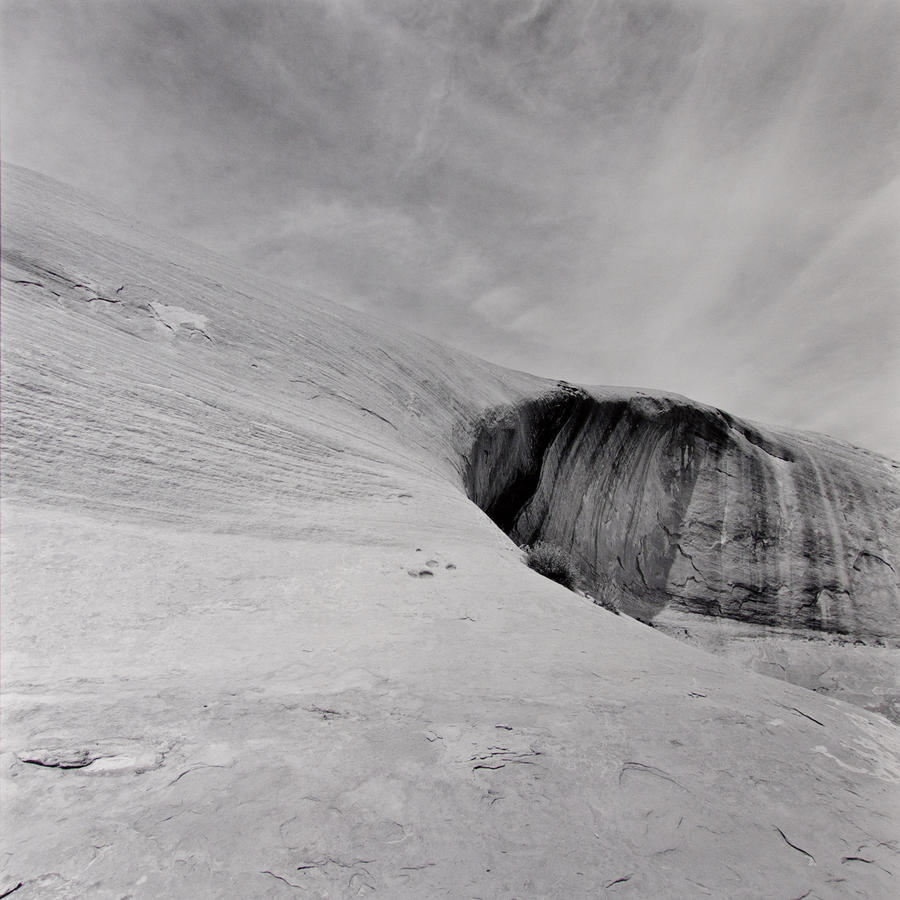 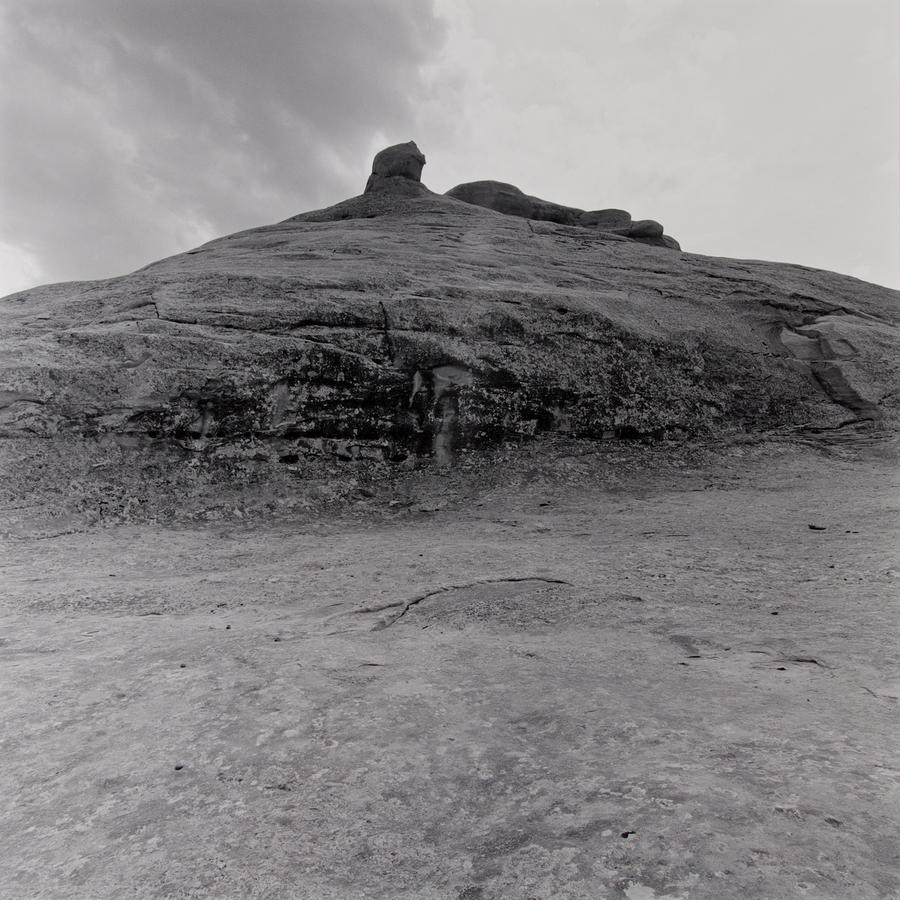 Is this just some middle aged New Englander white guy with a camera reacting to this most unusual of landscapes, responding to the differences between home and here? God, I hope not. Remember, by this time this kind of place is not new for me, this photographing in the Southwest.

After a few more we arrive here: 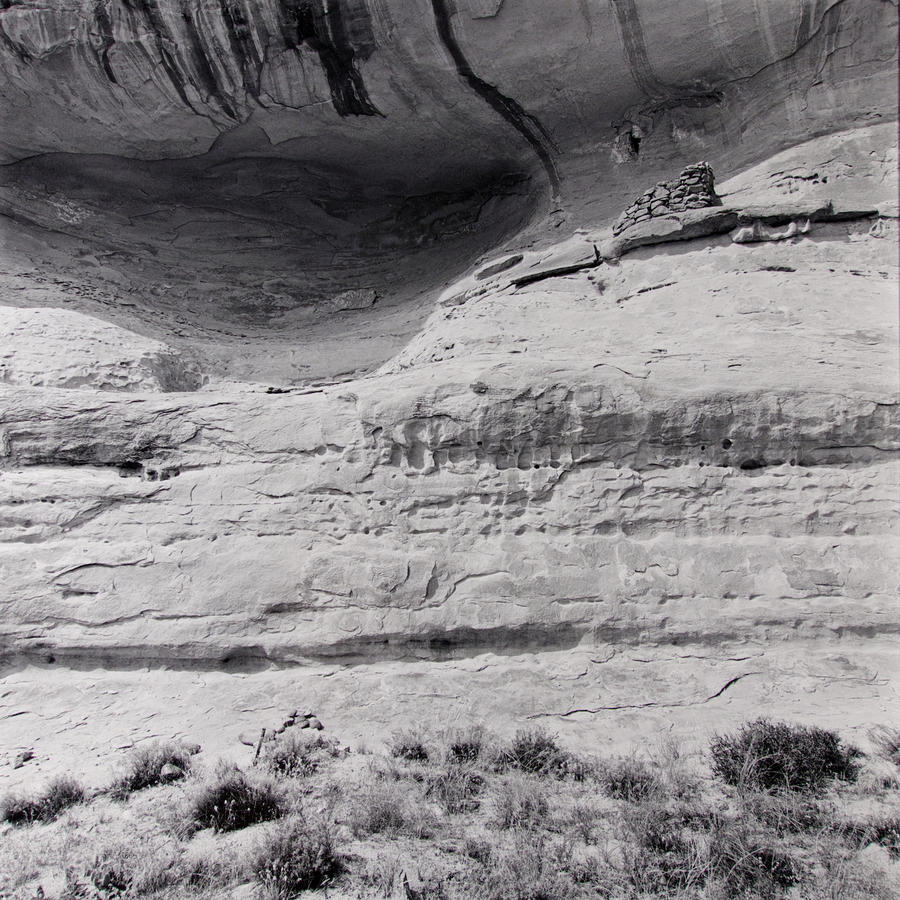 which begins to get us somewhere very specific. There have been people here and a very long time ago. 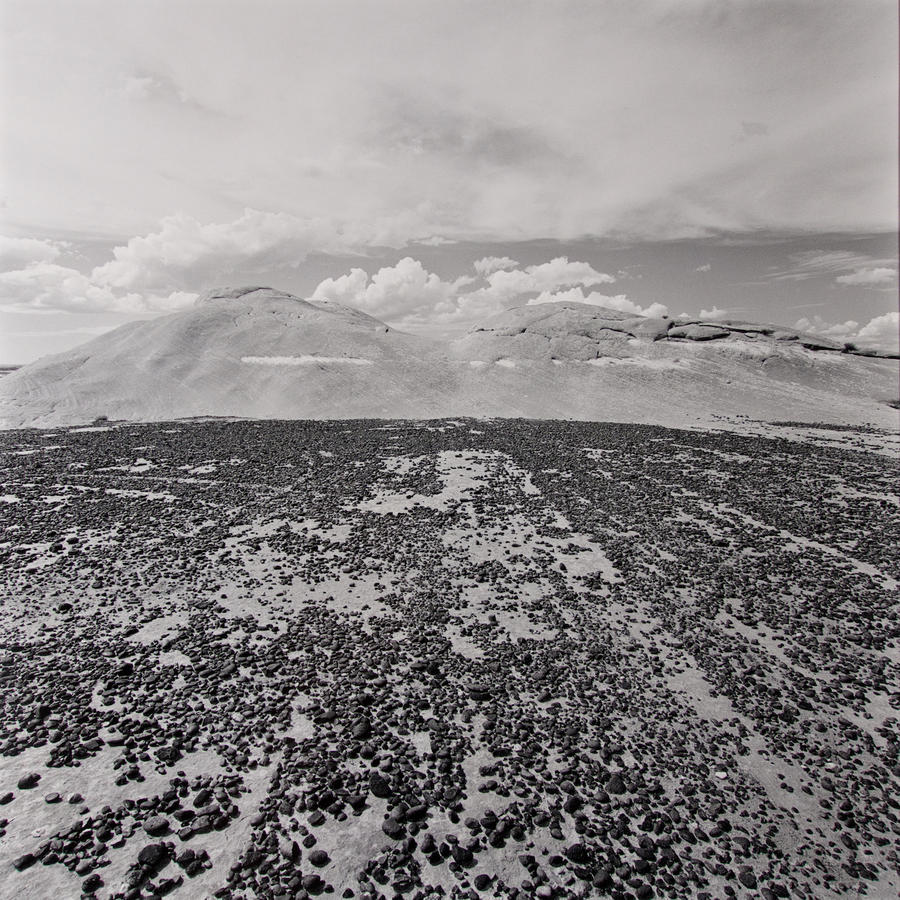 There is also a landscape bizarre and unique. No tourists, not on the map or at the end of a trail, no attraction. This made me feel unique, privileged to be in what turned out to be something of a sacred space. 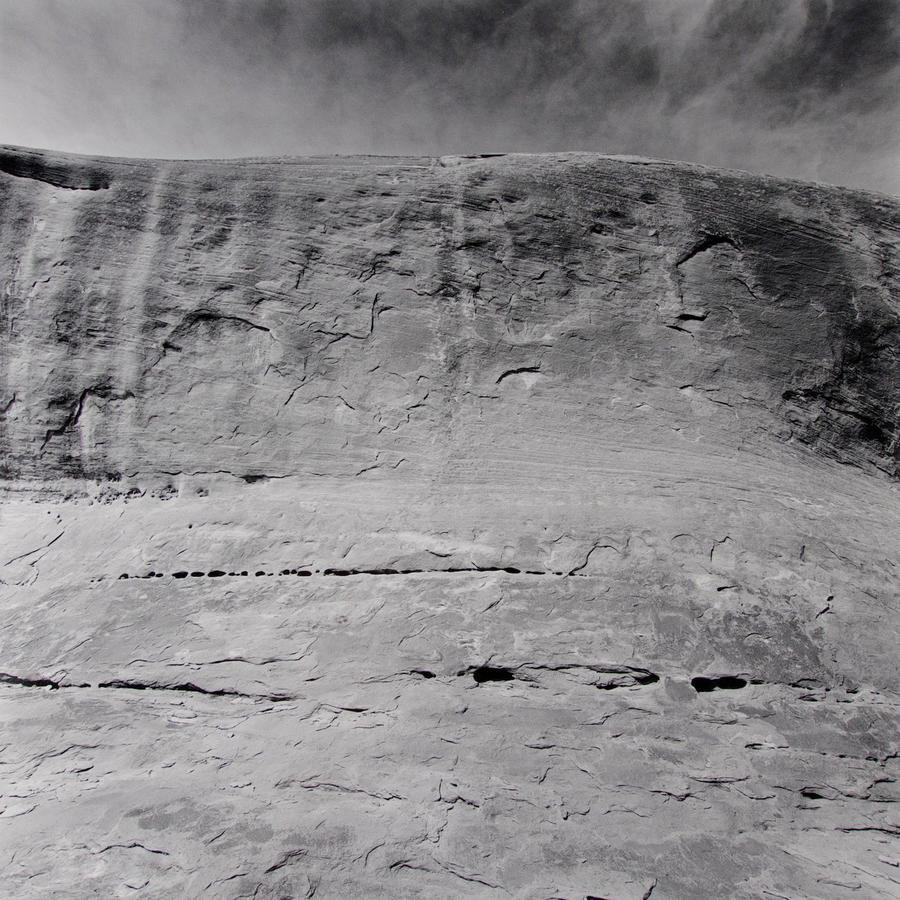 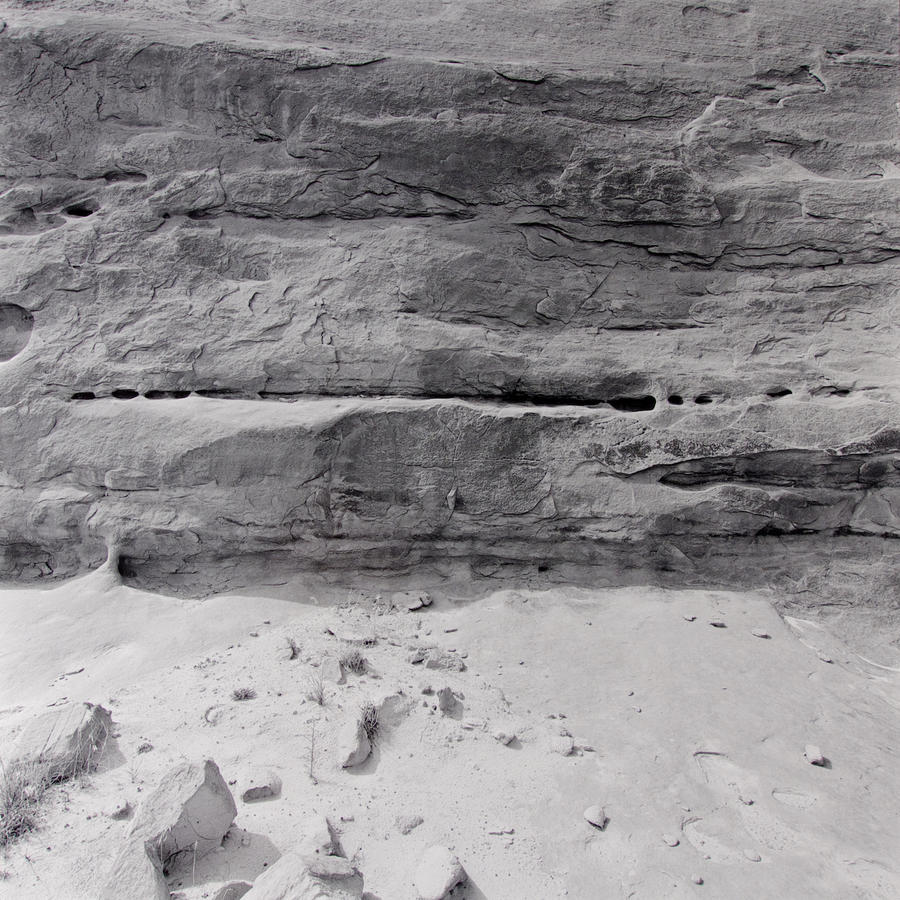 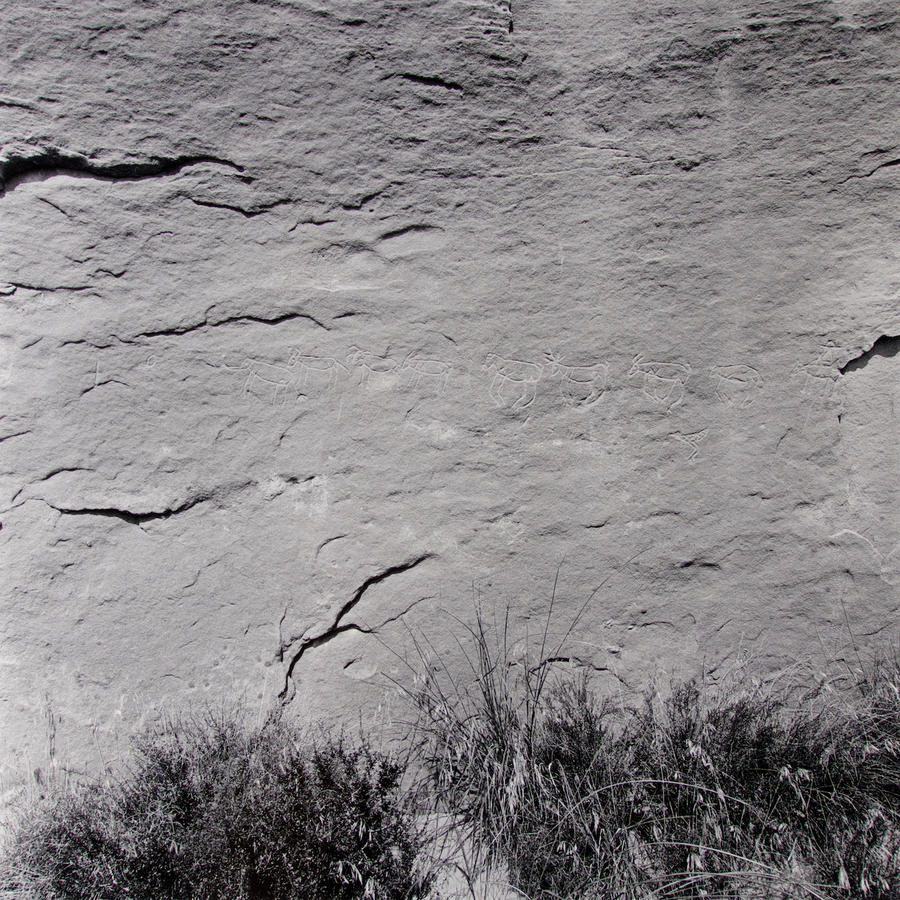 Here we are, finally, to a line of antelope or deer scratched out of the rock face how many years ago? 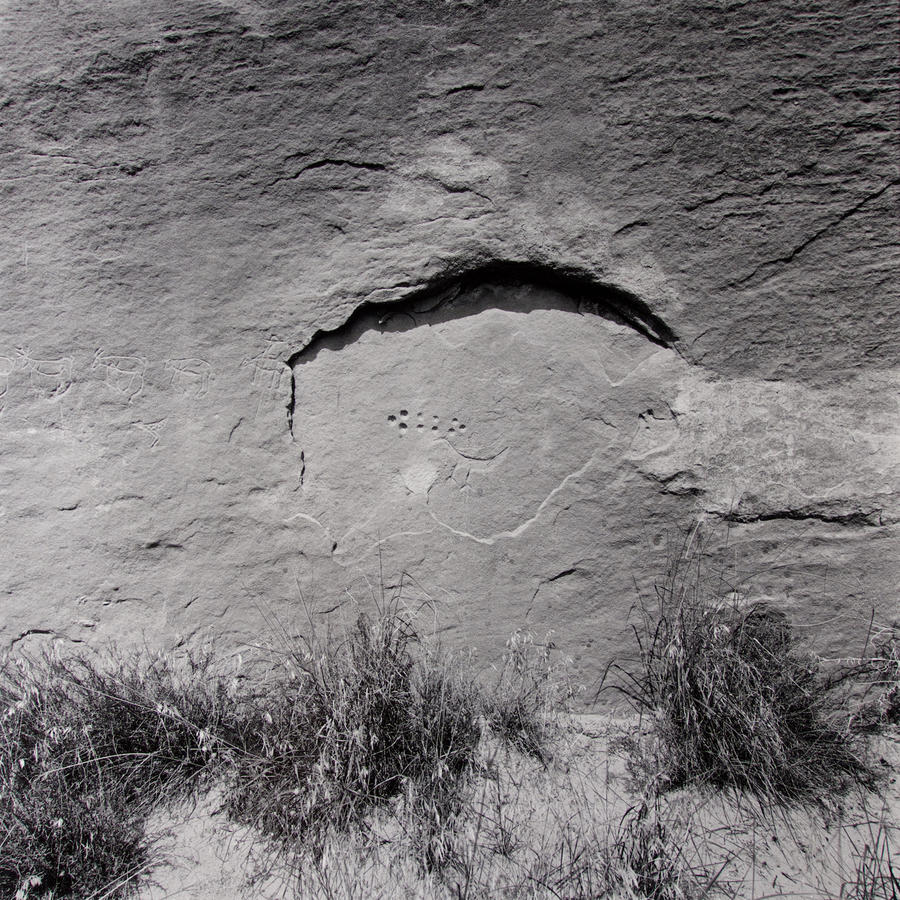 Sitting there, year after year, right there on a moonless night in February, with snow drifted up against the base of the wall or baking in the August sun, season after season. To, finally our own more present form of lasting, of preserving something of ourselves long after we are gone: 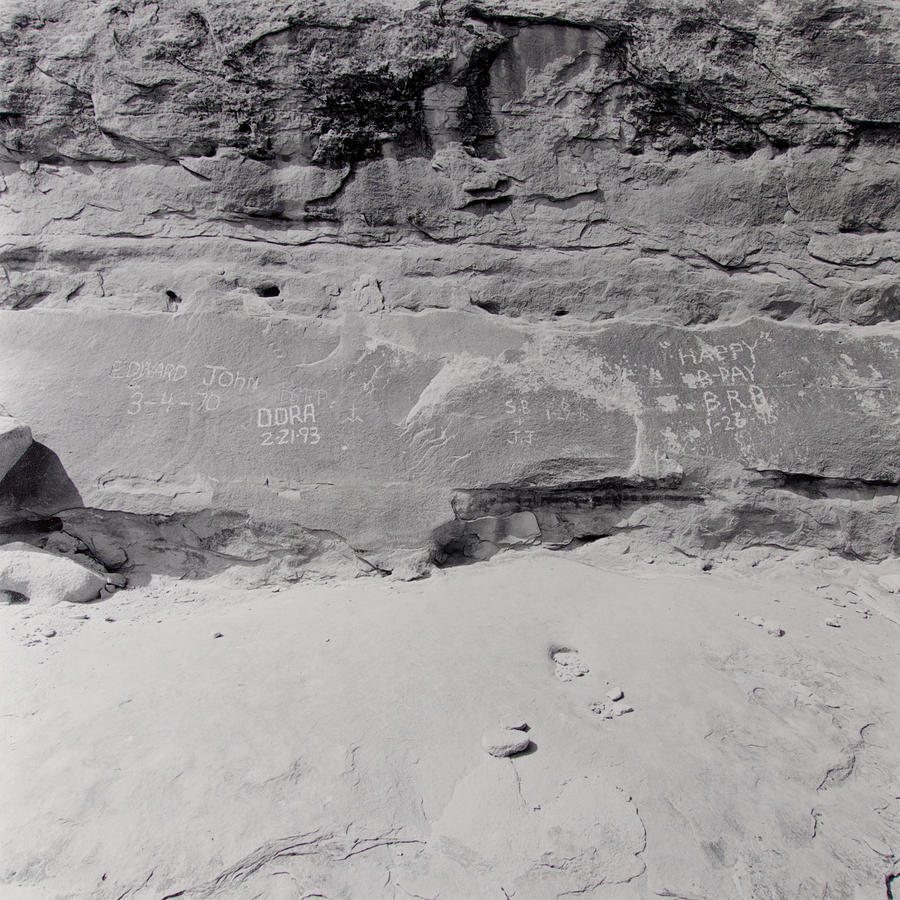 I remember being so offended at the discovery, from petroglyphs cherished for being authentic and a window into an honorable past to graffiti, the most recent carved into the rock just a few years ago, "DDRA or DORA 2-21-93", as though one was to be preserved and honored and the newer reviled as crude markings by teenagers clueless to our national heritage.

How did I end the Bluff Utah series? With this: 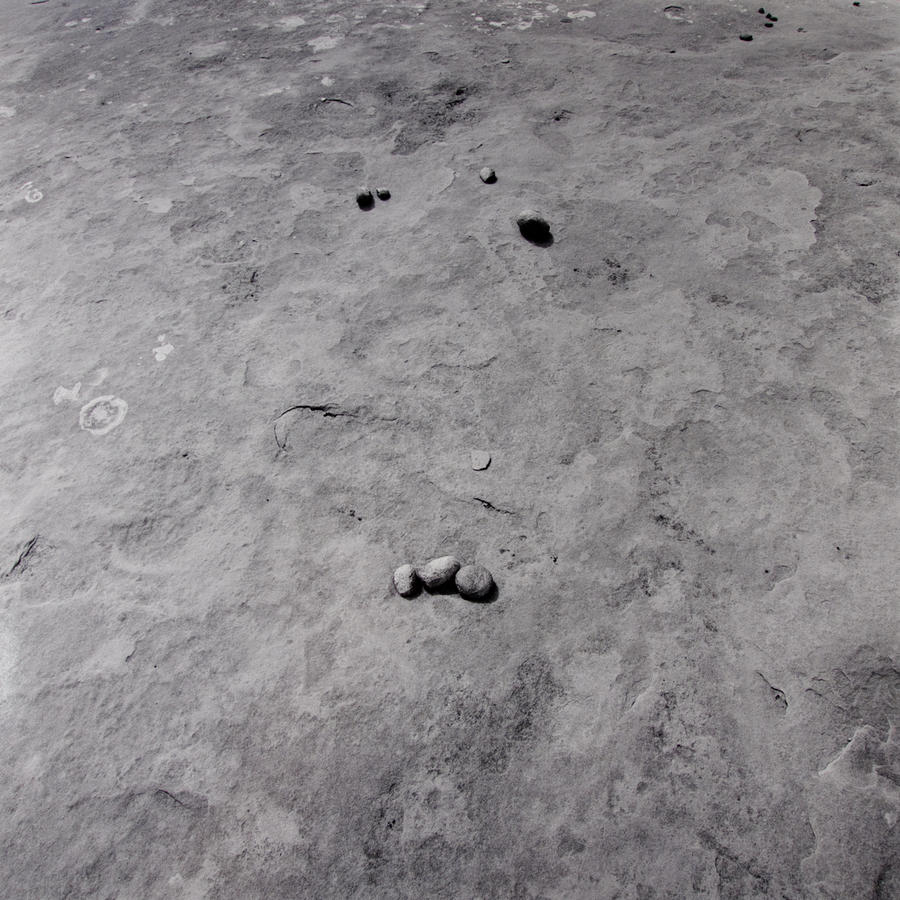 which was a symbol for me of both the real place, this ineffable shrine with something man made in the shape of a circle on the rock floor.

In the last scene in the wonderful 1982 movie "Blade Runner"directed by Ridley Scott and starring Harrison Ford, Rutger Hauer, a "replicant" whose time has run out says, "I've seen things..."

I too have seen things.

Made in early summer 1997 near Moab, Utah  while mountain biking.

Prints are 12 x 12 inches and are vintage, are archivally printed by me in the darkroom. No edition.