In 2003 I went to Venice, Italy to scout it out as a possible location for teaching photography in the summers for Northeastern, where I ran the Photo Program. My idea was to combine forces with Holly Smith Pedlosky to teach photography for a summer semester for the school. Holly had gone to Venice frequently ever since her honeymoon when she was younger so she knew Venice very well. She also had been teaching workshops for many summers in Venice and, on alternating years, in Varenna, a village on the edge of Lake Como. Sadly, Holly died in 2012 of cancer (obituary here). Holly and I spent a week or so that summer traipsing around Venice, speaking to locals about how it all might happen: working on where we would house students, where we would teach, what we would teach, where we would house the faculty, the various logistics involved and so on. Little did I know that upon my return to Boston there would be a nightmare of bureaucracy and obstacles thrown up by Northeastern in the process of trying to make it all happen. Suffice it to say it took two more years of sitting in meetings with amazingly inept people, filling out forms and explaining the concept to pull it off. Argh! It gets my blood boiling just to think about it now. I was successful, though, and ran the course in Venice for three years myself. In fact, it is still running every summer.

That summer in 2003 I wasn't only there to plan a future study abroad program, I wanted to photograph. One of the areas that caught my eye was at the arsenal, (arsenale in Italian). Arsenale is a vaporetto stop (water taxi) and is the walled fortification where the military was housed to defend Venice throughout much of its long history.

But my interest was along the back side outside the walls of the Arsenale where it was, frankly, a mess. To get there I had to get off the vaporetto at an obscure stop on the other side of the island that really led to nowhere. There were some overrun gardens nestled up against the arsenal's walls. I might have had to cross a fence to get access. One of the advantages of increased age is that I can't remember. 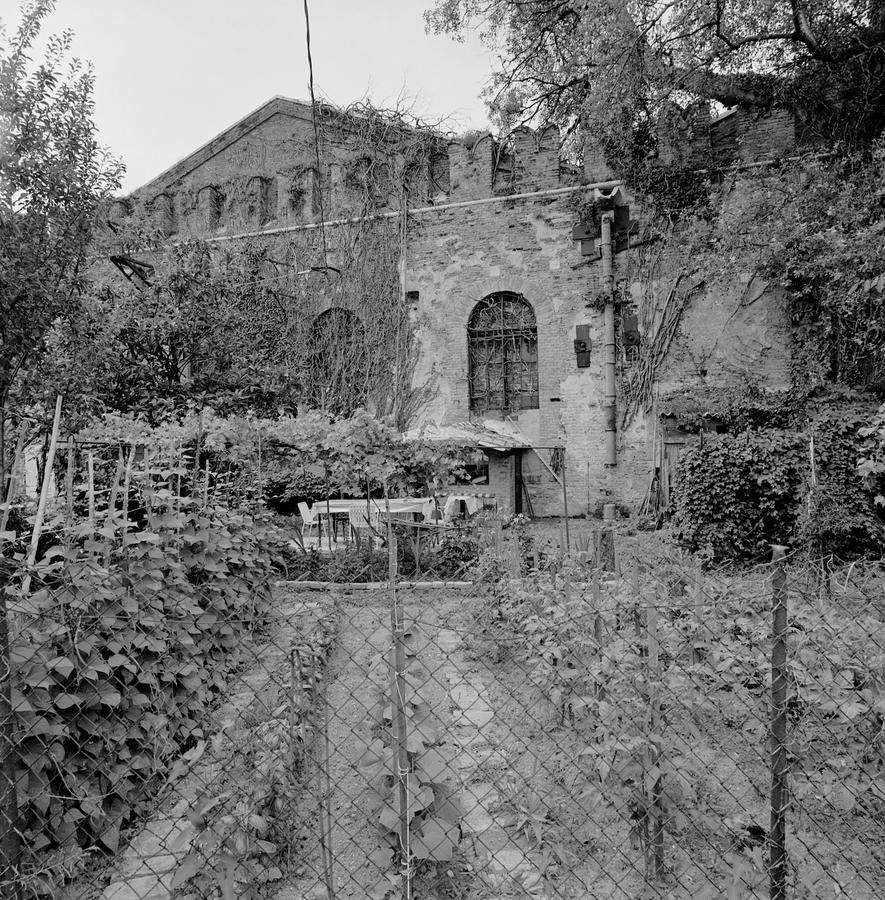 What I loved about this place was that it was what the locals created away from the crowds of tourists. Venice is finite, an island in a lagoon with way too many people all the time. It is a sort of bizarre Disneyworld in that it is a place that is in existence to present itself to hordes of tourists from all over the world. And to get their money. But on the outside of the back side of Arsenale locals had a few tables, grew a few vegetables and escaped from the relentlessness of thousands upon thousands of people tromping through their city like in a siege. This place was an escape. 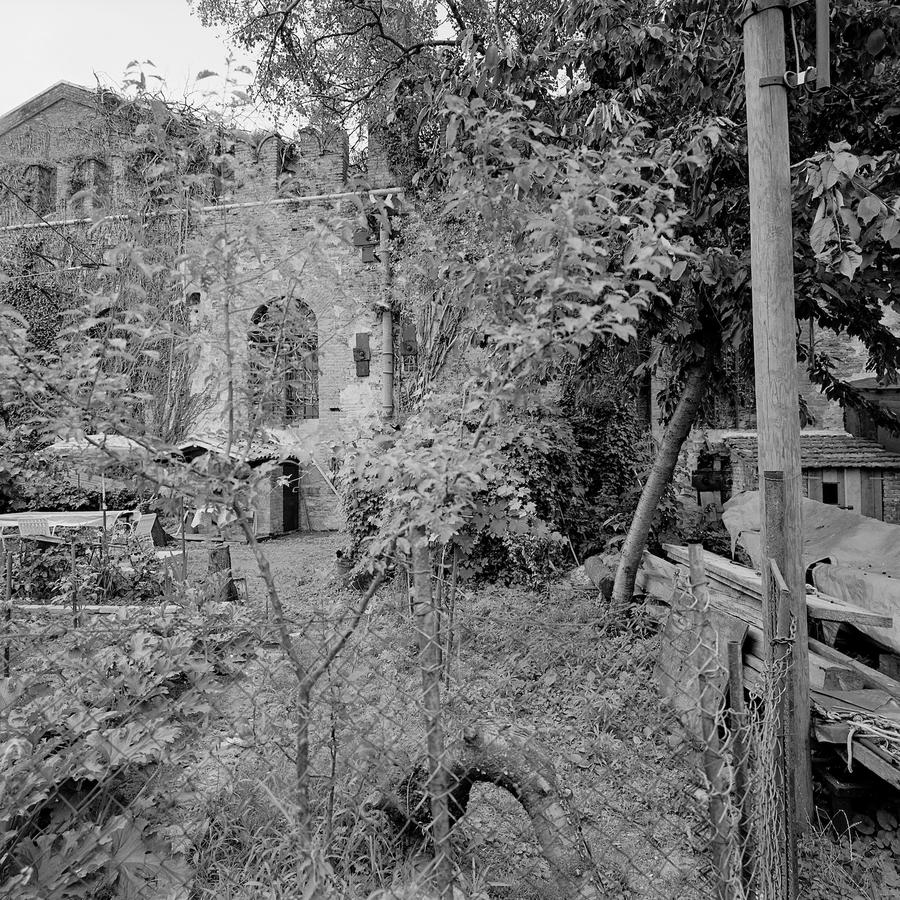 As I began to photograph it seemed odd but I was on familiar ground for I had made a series of pictures in a manner much like this many years before. The project was called Solothurn and was from a small town in Switzerland where the series unfolded in a sort of jigsaw puzzle of sequenced pictures. My series Arsenale is like that. 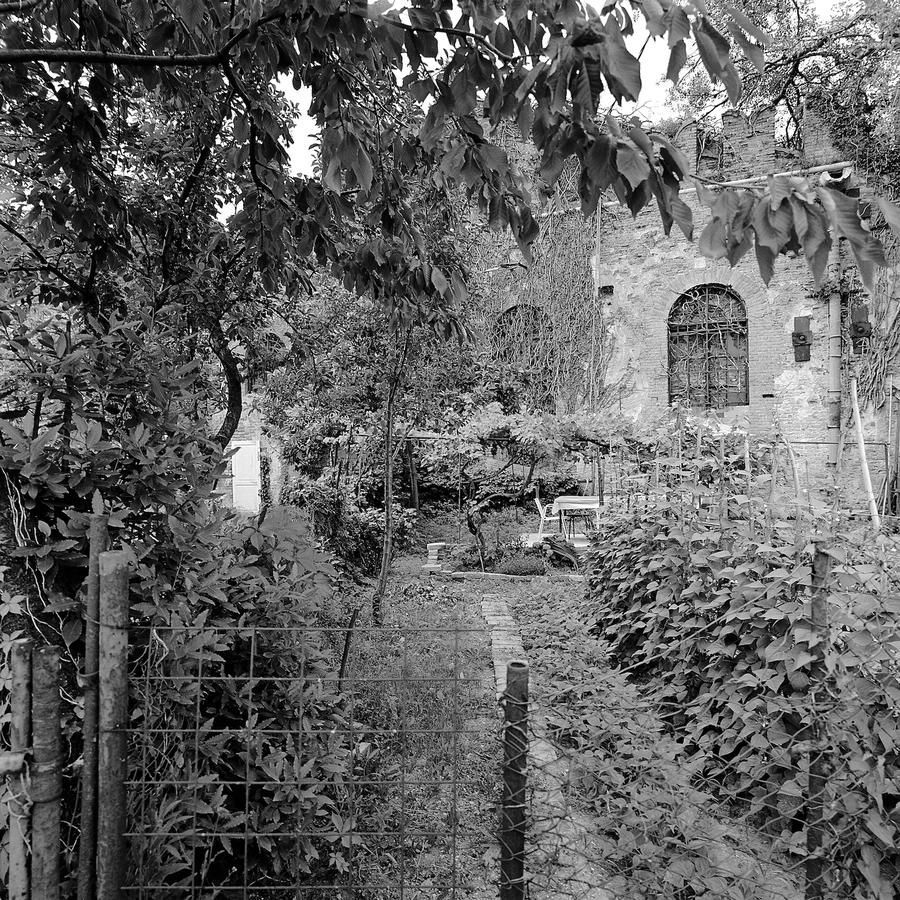 You can see that here everything is the same but different from frame to frame. I wrote a little about this way of working, referring to the Solothurn portfolio, made in 1983:

Solothurn CH to be precise. Having gone to a European photo festival in the town I set out with the Hasselblad SWC and several rolls of film down the back side of these row houses on a mid afternoon mid week in mid summer. Bang! These things so interconnected and intertwined as I walked down the street, something frame left was showing up in the next one, frame right. Like a jigsaw puzzle, the challenge was to see that, search, find the connection, the thing in its new location, and move on. This was a new way of working, of course. I’d never connected pictures to pictures this way before and this one hit me hard. There are also several frames where I push the lens right into something, more than I’d done before. It was this series that showed me how good the SWC was close in.

Let’s not forget that this is very early series days and this is maybe the third one I’d done (I started making tightly sequenced series work in 1981). It was a big period of learning for me as I was now in the work, so to speak. Not trying to get to the work, not hoping to be in the work, not wishing for anything except another shoot as good as the last shoot. “In the work” means I am in the project and consumed with it. Story of my life, really.

So there I was on the backside of the wall of Arsenale in Venice, Italy, making these pictures, sliding along to place something that had been on the left now in the center and/or perhaps next on the right 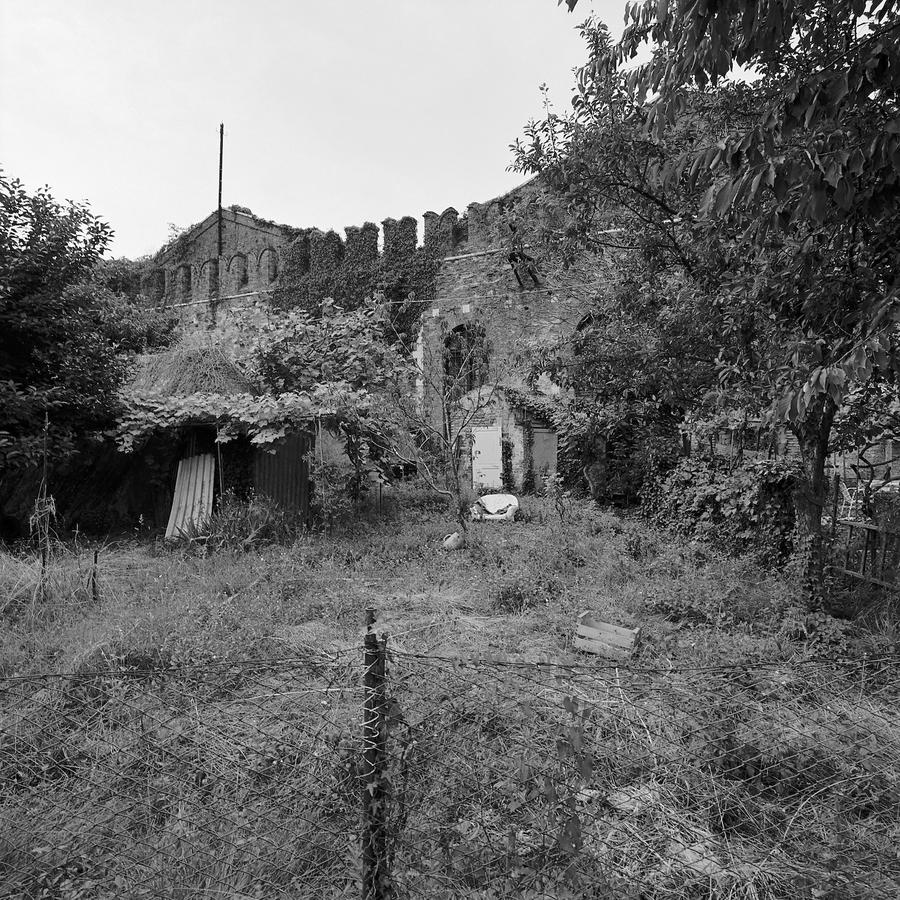 with the wall the glue that held the pictures together and made them compre-hensible.

So here, twenty years after I'd made the Solothurn pictures I was  back in this process in front of this wonderful and complex place and knowing I had a way, a method, a strategy by which I could make pictures. You get that, I am sure. That there needs to be a framework around which you hang your pictures, some sort of logic or process by which you work.  At least in this manner, this way of tightly sequencing the work to strive for a whole.

I can't really go through all of them here as the post will be too long but will place them all on the site on the gallery page soon so you can see the full set.

At any rate, the project moves on in its incremental way and arrives here 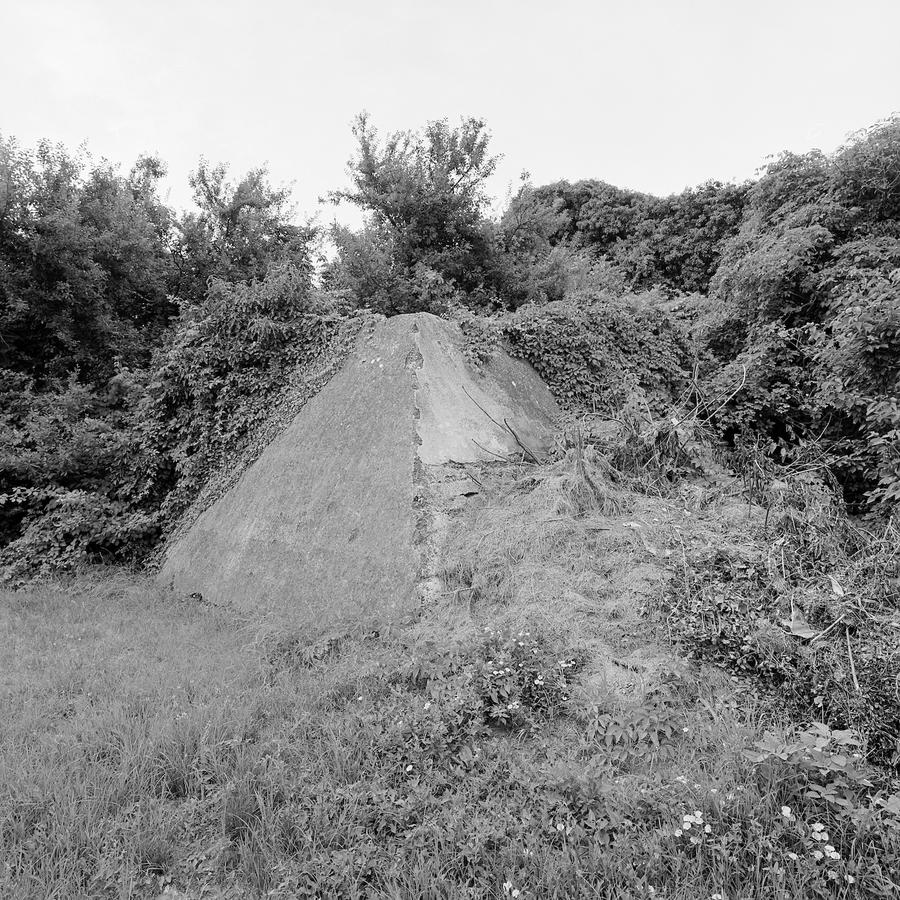 to one of those "aha" moments, this rule breaker, this foundation shaking picture which is, all modesty aside, simply gorgeous with its structure, softness, its breaking away from the back wall to establish itself as no longer dependent upon the wall for visual support. It is a core picture in the series, one that many of the other pictures pivot around and one that hits close to home for me emotionally.

And, of course, it goes very well with this: 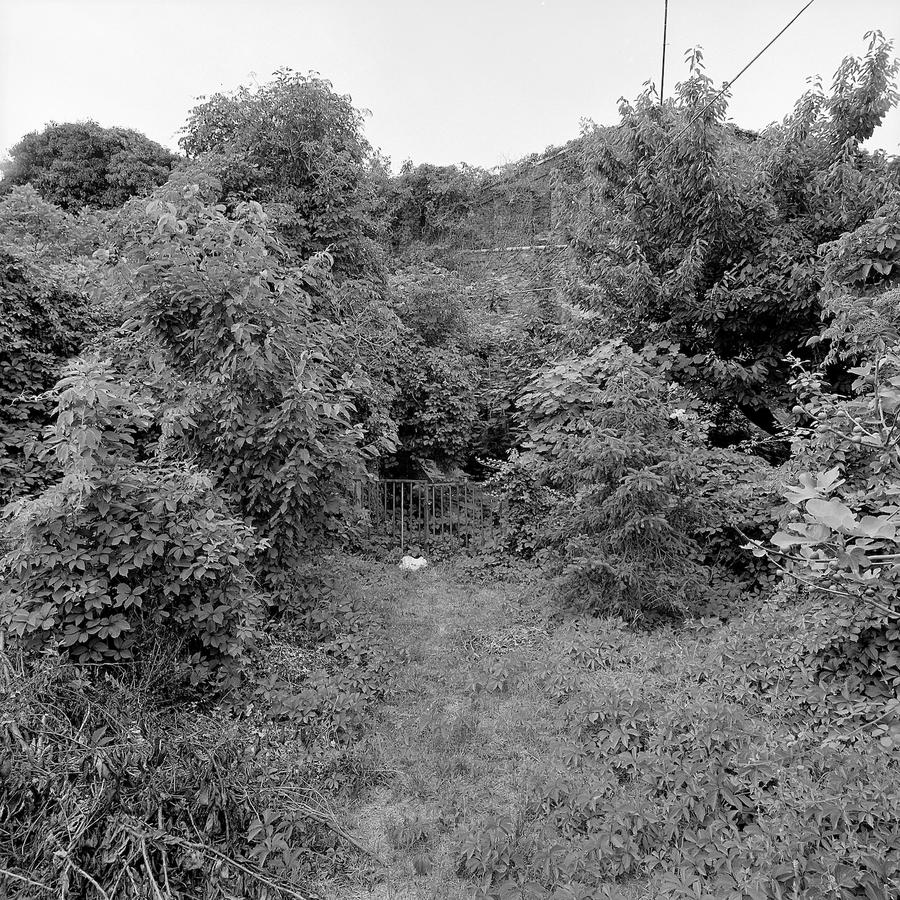 where things have really gotten a little out of control, growth-wise. The series concludes with a little more logic, a little restoring of things to a sort or normalcy. I am not usually a cynic and this series, made in 2003, came back around to the wall again and also to some of the tools used in keeping a garden. 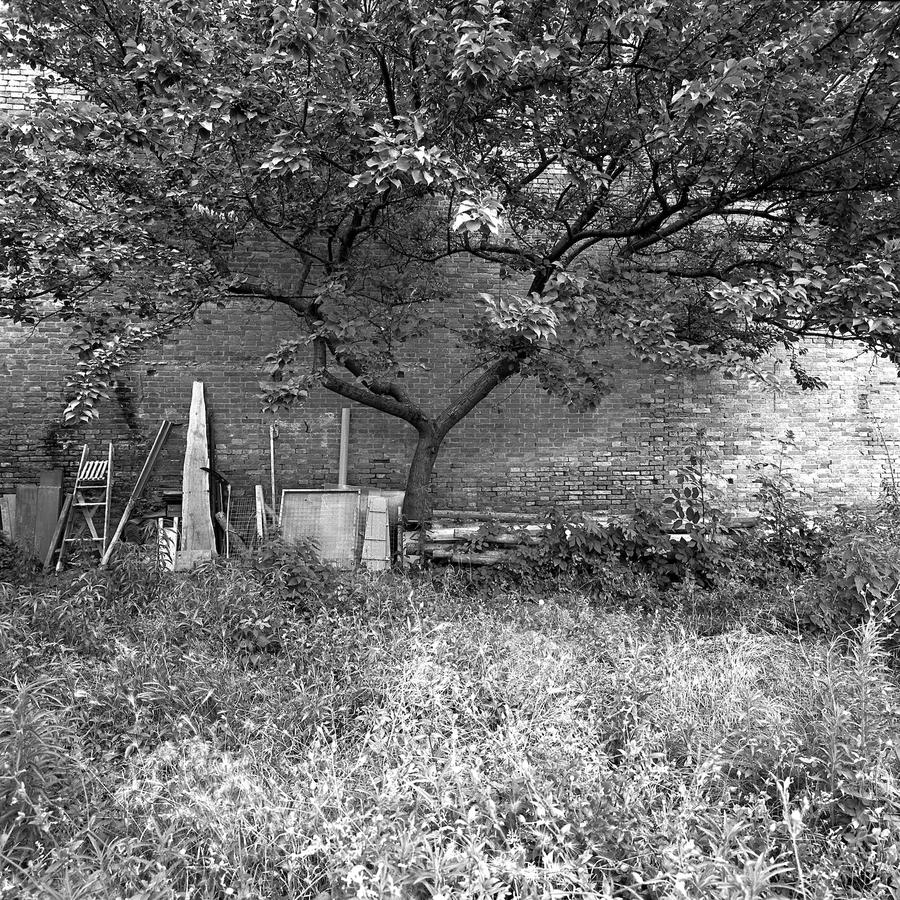 I will finish soon, I promise, but bear with me for one more point. While I have discussed this way of working, this sliding down something to form a whole through composite parts (not so dissimilar to what what I did with Dorothy, from the Wizard of Oz, in the current show at 555 Gallery up until Oct 17 of my Monsters work which I really hope you go see) there is another concept at play in Arsenale. Is the seminal picture of the concrete pyramid made as it was found as I moved along the back wall, in essence there as if come upon as a surprise? Or are the other pictures made to hover around the pyramid because it was known and made first? To bring you into this one core image? Is this one picture made by calculation for perceived effect or by intuition in an emotional response? There are two different motivations as possibilities at work here and there would be two different results, I believe. For the record my process in making the Arsenale photographs was the former, for I didn't know the pyramid existed until after I'd made the earlier images in the series. So, yes, I came upon the pyramid. I love that, that the artist has made discoveries just as you do as you look at the work, picture after picture. That's in there, I believe. The joy or amazement in discovering an exceptional something in front of me and all it takes is the quality of my practice and the smarts to know it is exceptional. Finally, it is a contextual thing. No way would the pyramid photograph have any interest or relevance if the other sequence hadn't preceded it. Igor Stravinsky's melody and harmony make little sense and have little impact unless there is dissonance and stridency before them.

I find it ironic that the series of photographs of Arsenale is about the outside and back of the structure and this blog has been about the inside of the series.

We are done with Arsenale and its meaning and implication. What this is, of course, is explication. The explanation of the meaning of something. In large part it is what this blog is for. In the case of my work, to bring you into it and to help you understand it better and clearer, at least from this one person's perspective. Good work? Bad work? Can't really say, I just can relate it to you as I worked it, saw it then and see it now through the perspective of many years distance.