This is a reissue of a blog I wrote a while ago that was up on the site briefly, then replaced by another one.

In this post I will write  about one of my books, called Above. And how it is marketed, or isn't. 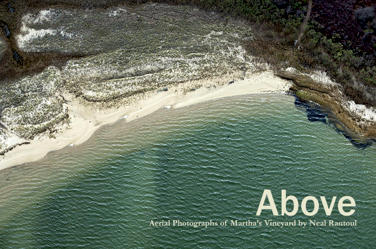 It's a really good book (modest aren't I?). It is aerial photographs of Martha's Vineyard, designed once again by the incredible Andrea Greitzer and printed beautifully. Maybe it's our best on-demand book yet but it's also got a problem. Actually all the on-demand books I've done have a problem. Because of my "no compromises" philosophy, which when wedded with my wish for these books to be large makes them too expensive. Even taking advantage of My Publisher's (the company that prints these books) seeming to always have sales or discounts, the cheapest of the books cost me about $75. So, yes, a little pricey but a great book. This all works okay if I sell them at no profit. Lately I've been selling them at $80 or $85 to at least cover shipping. Worth it? Yes, in that I am putting them into the hands of people that want them and appreciate them. This is one of those times where I do something for the "greater good". Meaning the greater good of getting my books into the hands of people who want them.  The sale of the books is also good for my career. Making money? Not so much.

But all this falls apart when you ask a bookstore to carry one of these books. Why? Because they can't put one on their shelves unless they make something and if you know anything about retail sales of books you know that a 100% markup is pretty standard. So now, in this case we are talking about a $75 book going for $140. Yup, that's exactly right.

When I was on the island in early May I took the Above book to the two largest book retailers on the island. At Bunch of Grapes in Vineyard Haven I was asked to leave it overnight so that the buyer could take a look at it. The next day when I picked it up I was told by the buyer that it looked like a very nice book. When I asked him if he'd looked at it he admitted that he hadn't but that he thought the cover looked good. Clearly they weren't interested and, after that, neither was I. I then took it to Edgartown Books where I was also asked to leave it overnight. The next day I met with the owner Susan Mercier who said that she liked it very much and that she wanted to carry it. We discussed the price and she said that it should sell for $140. I said that I didn't think it would sell costing that much and she said, "you don't know my customers." She was right. It is selling, sitting behind the cash register where the higher end books are on display.

Okay, a modest success up against a track record of significant failure. I know, that is a little harsh and it is important to state I have no regrets about the books I've made. But perhaps there is a new paradigm that can serve in this world of on demand publishing. Next up we will try a few books, smaller in size and in number of pages  and therefore cheaper, that address specific series. They might be slipcased so that when on a shelf there are several sitting side by side in a box. If this sounds like a good idea and you are a publisher and are interested in taking this on, please get in touch.

Will this be a sell-out success? First of all in the on demand publishing world there is no sell out as there are no real editions, unless you arbitrarily establish one. Secondly, I would be surprised that in this scenario I would make any money. I would hope to break even.

All those years I ran a photography program at Northeastern I was often accused of being too centered on photography, wanting improvements, resources, faculty, staff, etc. for Photography and not caring enough about the rest of the Department which was Animation, Graphic Design, Video, Art History and Multimedia. I developed several defining  phrases while there and one of them that has withstood the test of time was, "if you're not moving forward, you're moving backwards". I believe that applies very well here too in terms of books of my work.

We will continue to move forward.