Wisdom. Seems like we have more older people with wisdom than ever before:

Mary Catherine Bateson is a writer, a cultural anthropologist, and a visiting scholar at Boston College. Her books include With a Daughter's Eye: A Memoir of Margaret Mead and Gregory Bateson, the bestselling Composing a Life, and Composing a Further Life: The Age of Active Wisdom.

Living longer, we face choices never dreamed of by our grandparents or even our parents. How will you use the unprecedented freedom of your "found" years? "We are not what we know but what we are willing to learn," says Mary Catherine, author of the bestselling Composing a Life. She speaks of  how to transform a life into a journey that inspires, invigorates, and brings joy to yourself and others. We seek to learn to recognize and release expectations and stereotypes that no longer serve as we confront the big questions: What do I care about most deeply? What is my true purpose at this stage? Will I be a solo player in life or part of an orchestra?

Professor Bateson is the daughter of Margaret Mead and Gregory Bateson. She speaks about this new phase in our humanity, these "found years" where we live longer and have the ability to function fully beyond what was true in the past.

Being in this phase I can relate to that and believe I am capable of wisdom, at least in my field, my chosen professional interests as an educator and artist. Unless I am found to be senile. You readers may be the judges of that.

Yes, I have worn two hats over my whole career.

Not so unusual these days. I am sure many of you feel this way if not three or four hatted. Passionate about what earns you your salary, what you practice when you can (maybe photography in some form), perhaps parenting and the role you play in your children's lives or in managing your aging parents or a difficult sibling or loved one. And so on. Different hats.

But Bateson's premise rings true at least to this senior citizen. The anthropological fact is that we are living longer and in that living some are living longer with all their marbles and considerable physical abilities too. What does that mean to us in our society? She proposes some optimism for us in issues like climate change for she believes the aged may possess the wisdom to understand the extent of the crisis we are in. After all, my generation not only has caused some of it so we may be part of the solution.

I find myself thinking that there may finally be some possibility of gun law reform and a national movement to get Congress to enact laws that limit their ownership, activity and use. 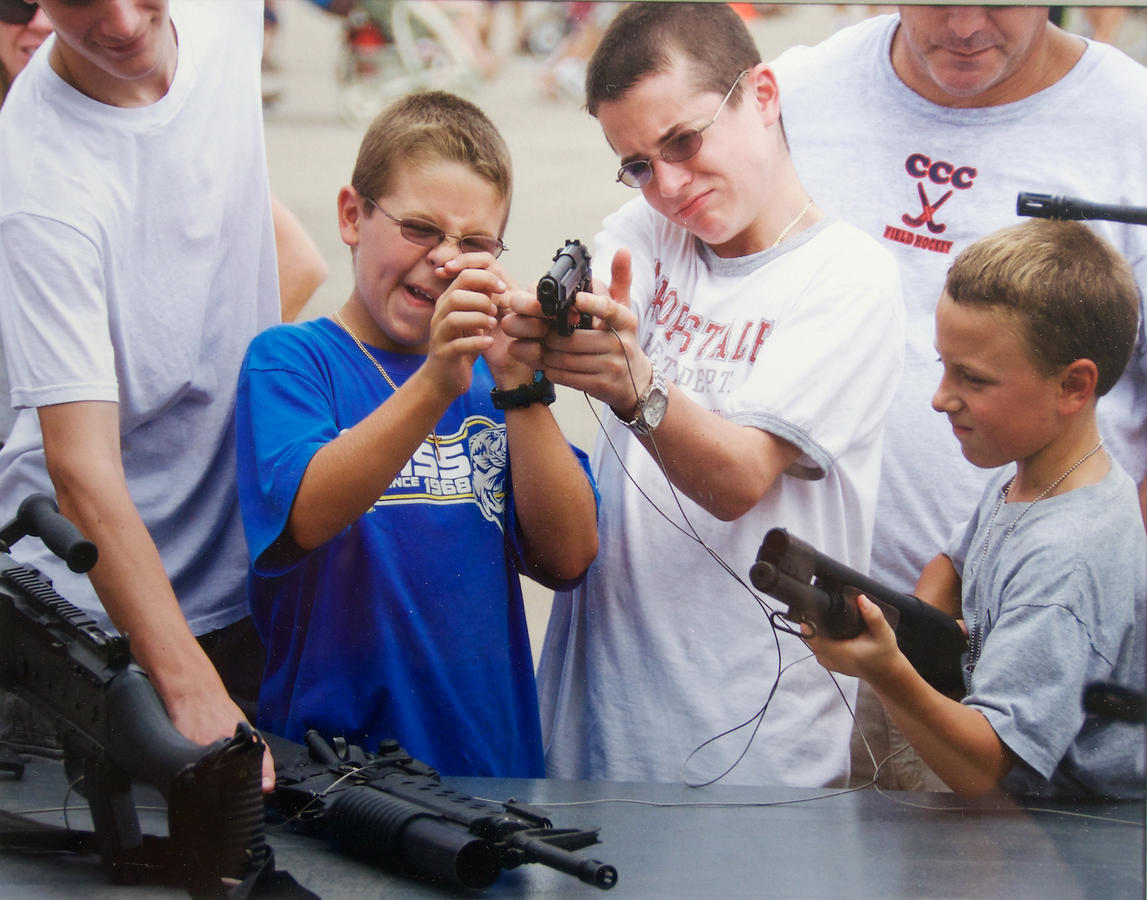 I made this several years ago at an air show at the Otis Air Force base on the Cape. The US Army had set up a recruiting booth and there were several guns arranged on a counter that you could fake shoot at a target. These boys were loving it. I made a few pictures from behind but it just wasn't working. So I walked around to the back of the booth and saw there was a gap right next to the target.

I am writing in response to the most recent massacre in Roseburg, Oregon. Another in a long list of killings by a single shooter. This must stop.

Years ago when Jim Fitts was the director of the PRC (the Photographic Resource Center) in Boston I submitted a large framed print of this image for their annual auction. The PRC auction was one of the first auctions in Boston created to raise funds for a non profit and certainly one of its most prestigeous. Farther back in years I had worn a tuxedo to one as I had been instrumental in the PRC being donated a Frederick Sommer print for the auction. Sommer prints sell for astronomical amounts. That was a good year for the auction.

At any rate I got a call from Fitts telling me he wouldn't put my print in the auction show. Right away I thought he was "censoring me" and was prepared to go on about free speech and this wasn't right. After all, they'd invited me to submit. He reminded me that this was a fund raising auction and that the print was atypical for me and to keep my eye on the prize, which was to raise funds for the PRC which desperately needed the money. Not to make controversy. I took the print back and instead submitted a wheat field picture which subsequently sold and made money for the PRC. Of course, he was right. Thanks Jim.

My point and what Bateson is saying? That as we live longer and retain our abilities to function fully in our society we as seniors are a huge and significant force in making policy and changing laws. And we vote.

This one below made in July 2014 on a kayaking trip down the Connecticut River on the border of New Hampshire and Vermont. I beached the kayak and walked up a mostly dry stream bed and found this: 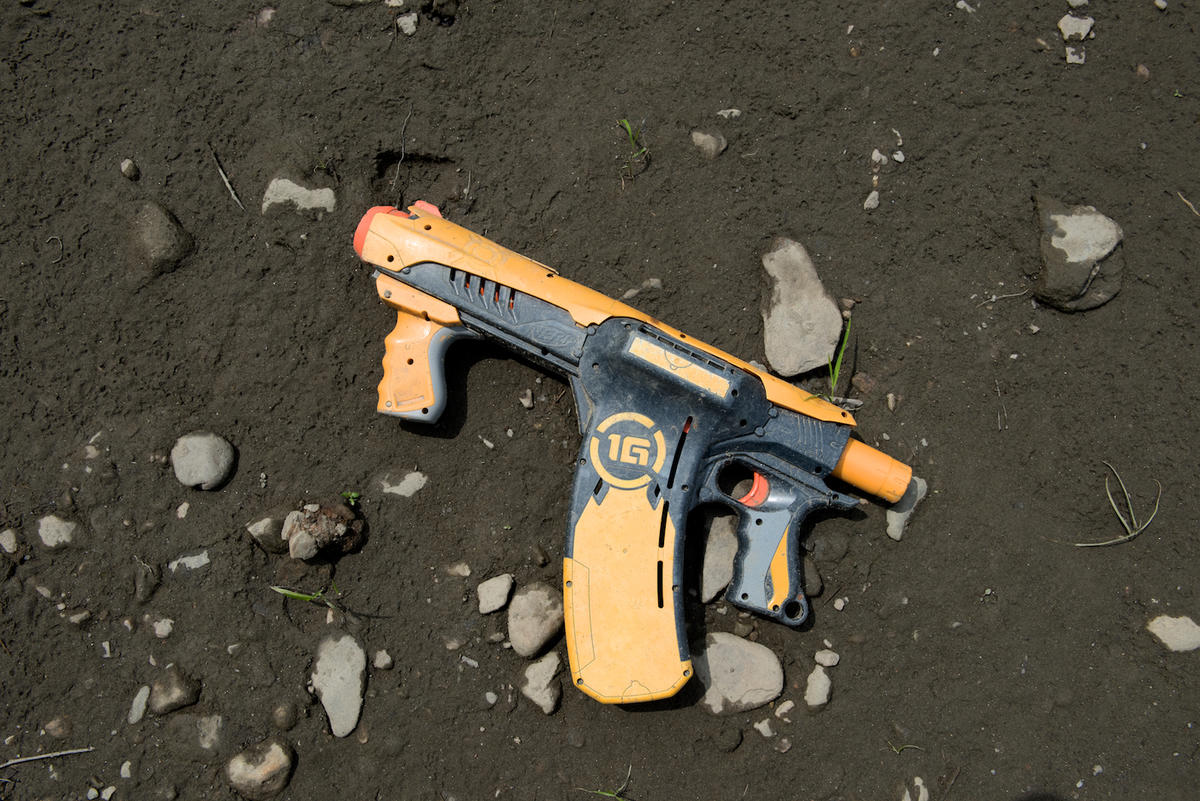 We need to act on this issue of guns in our society. Right to carry? 2nd Amendment guaranteeing rights to own guns? The NRA? Law abiding gun owners? Or students in class asked what was their religion, then shot in the head for answering wrong? Obama's right. Make this the single issue in your vote for your representative in Congress. Don't like that person's stance on guns? Make clear your belief by voting them out.

We need to be wise about gun use. Other countries are.