Many of you knew of or have heard of Tom Petit. Tom was a teacher of color photography here in Boston for his whole career. He taught primarily at the New England School of Photography in Boston and this is where I first met him. After being at Northeastern for a few years, I asked Tom to teach for me there and he did for about 15 years.

Tom was legendary in the photo community here. We referred to him as the "Dean of Color" as he was incredibly good at making critical color decisions in printing C prints and he taught color in a way that was extremely effective.

When I started teaching at Northeastern in 1981 what was immediately apparent was that I would have to move the curriculum into including color. This meant new enlargers, light tight spaces as safelights only worked for black and white, a color processor and an RC print drier. Over spring break in 1984 Tom and the lab manager from NE School, Tim McIntee, and I  built out the black and white darkrooms so that they could also do color. Tom taught color that spring semester.

Tom Petit was an exceptional human being. He became a role model for countless students over the years in both places he taught. He was simply the human  embodiment of "good" with all that word entails. His standards were high, his sympathy and understanding limitless, his value system impeccable and his love of  photography was strong and unwavering.

This is from the obituary on Photo.net:

"For over 30 years, Tom's wisdom, kindness and support had been a bright spot at NESOP and in the hearts of so many that had the distinct honor to know and work with him. In his personal image-making, Tom was not simply skilled, but fearless in his honesty and vulnerability. His willingness to share his personal and artistic challenges with others and to continue learning as a photographer inspired so many. He pushed his students to and beyond their creative limits in their photography--helping them find the strength to explore and bring their unique voices to the medium. We will forever hear Tom's sage advice: "Trust the process." He has permanently touched our hearts and minds, and he will be deeply missed."

If you were a  friend of Tom's you might get in your mailbox before Christmas a small box of caramels, hand made and hand wrapped in one of those boxes sometimes used for fried clams.  After he died, at the memorial service, his family handed out laminated cards with a picture of Tom on one side and the recipe for the caramels on the other. Here's what the card looks like: 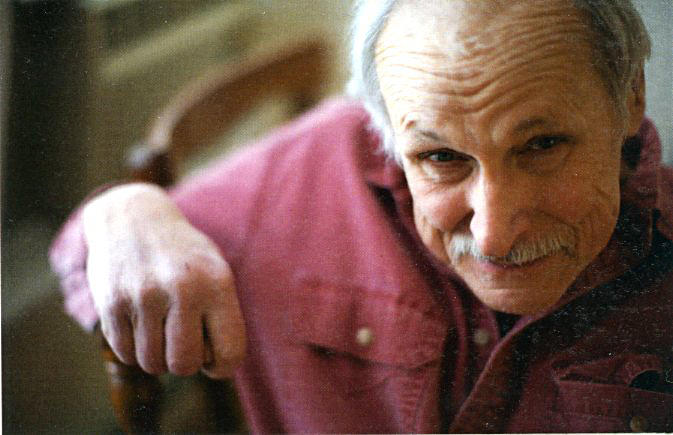 and here's the recipe on the back of the card: 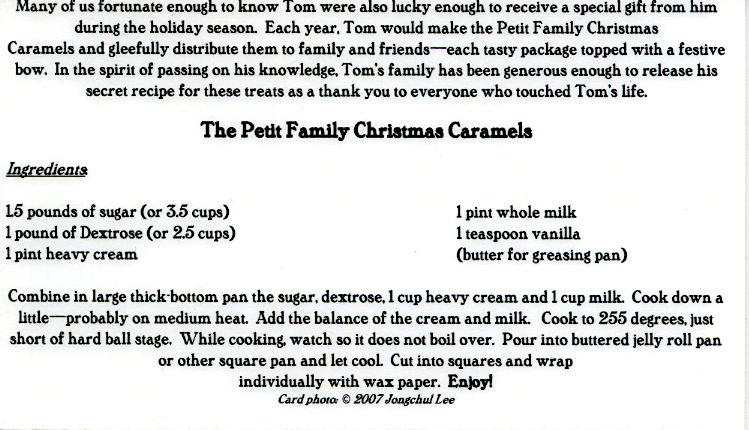 For the past several years my daughter, grand daughter and I have made these same caramels to give out to friends and family for Christmas.

Merry Christmas, Tom. We miss you!