I've wanted to write about this for a while now, the title that goes along with our work, the first impression formed by a word or a phrase, what the title connotes when you hear it, or see it there as a first page to a portfolio, what you think when you see a title on that cover of a book of photographs.

For my career most of my titles to bodies of work I've created have been simply the place and the year that the pictures were made. But this is changing somewhat. It seems to me to be an opportunity to guide the viewer along the path you hope they will take. Or to lead them in your direction a little.

Case in point: A couple of years ago I printed a new portfolio of aerial photographs from Martha's Vineyard. As I worked on the prints I couldn't help but notice little  things in the pictures were prominent enough to see if you really looked closely. In one there was a white spec on an inland pond that turn out to be a swan, in another there were six tiny fisherman standing along the shore, in another, a white SUV parked along the edge of the beach. Some of these were things I hadn't seen when I took the pictures, skimming along 800 feet above them. I've always hoped people would  spend more time looking at my pictures, not dismiss them after a few seconds and this was my tactic to get them to do just that.  I called the portfolio, "Six Fisherman, a swan, a SUV..." etc. to try to persuade the viewers to find these things in the pictures, therefore spending more time looking at them. 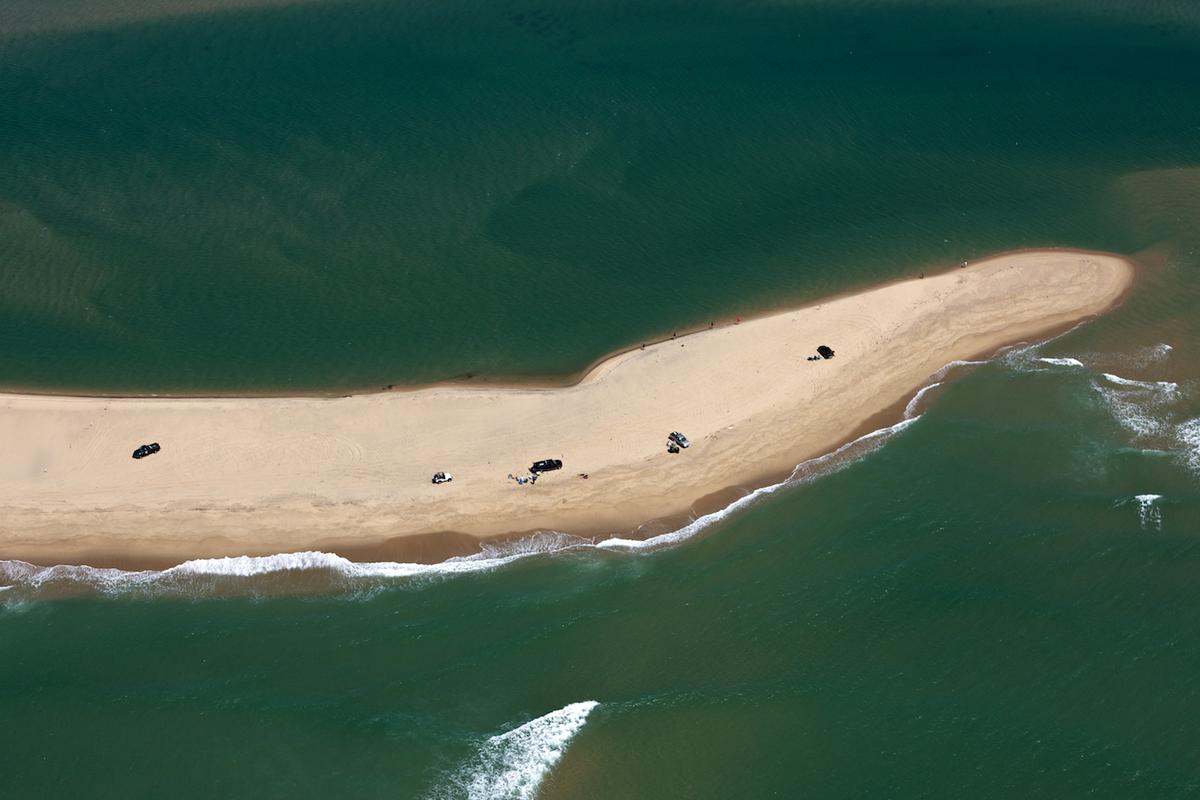 Above is the one with six fisherman and the full series is here: Martha's Vineyard 2012

Another case: the recent group, also from Martha's Vineyard, called: "Spring & Fall" with a subtitle of "Sun....... Setting". I described this work in the blog: Spring & Fall

So my take on this topic is to use a lead in title if it's appropriate, if you feel your work needs the quote from a poem, or a song, or a famous line from something, or perhaps from something you've written.

This story is about a show I had in 1982 that included text:

In 1982 I had a one person show of two bodies of work at the RI School of Design Museum in Providence. The two works were infrared pictures from Bermuda and the new series I had made on Nantucket. I printed specifically for the show. The Bermuda infrareds were square at 15 inches and the Nantucket prints were the same. Although the show wasn't titled "Two Islands" it just as well could have been. Along with these two separate bodies of work I hung a one page text, blown up to the same size as the prints, hanging between the two. It was a story, actually an account of a dream I'd had that was about a new relationship I had with a woman who's father had just died. In it I described how I'd shown her pictures and, although she couldn't concentrate well through the pain she was in, the dynamic of her wrestling with her grief while trying to look at the pictures was very moving. Why did I do this? To set a free associational tone in which to look at my work. I mean by that to establish a mood in which to then look at the photographs. Did it work? I have no idea.

As an aside, the curating of that show by the young woman and new curator of prints, drawings and photographs at the museum, was so benign as to be nonexistent. I brought the work and the story ready to hang, the work hung in a small side gallery for six weeks, there was a modest opening, I picked up the work at the show's conclusion and never heard another thing about it. Some shows are like that, at least some of mine have been.

Lastly, a very loose group of pictures made over a two year period called " Fences and Walls". This wasn't difficult as the pictures were of fences and walls. Often simple and using restraint is very good.