You ever listen to Car Talk on NPR? Tom and Ray Magliozzi the Tappet Brothers being very funny and outrageous, giving out car advice to callers? Tom died in 2014 but reruns continue. Used to be my garage, called Good News, back in the 80's. There's a puzzler every week on the show and Ray sometimes prefaces the week's puzzler by saying that it is "non-automotive". Well, although this is a photography blog, this week's post will be non-photographic.

Maybe this will buy me  back some of the readership I lost when I wrote a tech piece about a new lens a couple of weeks ago.

I've been going to the island of Martha's Vineyard my whole life. My parents brought me here for the first time when I was less than one year old, in 1946. The island is now big time tourism, with growing numbers of summer renters,  seasonal residents and "wash-a-shores". But back then, the town where our Chilmark house is, had very few summer residents. Our family friends were locals like the Sewards, Fischers, Pooles, Flanders and Mayhews. Fishermen, farmers, real estate salesmen, post office workers. One of my dad's best friends was Ben Mayhew. Ben and Eileen Mayhew had five children: Jonathan, Peggy, Gregory, Skipper and Eileen, the oldest. As my parents didn't build their own house on the island until 1964, in those earlier years they rented most summers, always in Chilmark. So my growing up summers were defined by my times on the Vineyard and some of my playmates were Greg, Skipper and Peggy. Their mother Eileen was known as Big Eileen and was actually very tiny and their oldest daughter Eileen, who was known as Little Eileen, was actually very big. Big Eileen died in 2016 at 101. The service for her was held on the island and there were stories  about Eileen and Ben and the  kids growing up in a family where their dad went from being a sword and lobster fisherman to an elected representative for the island to the State House in Boston. Mayhews are buried at the  family plot in the Chilmark Cemetery at Able's Hill within spitting distance of where my parents are, and where I will be.

I dated Peggy Mayhew a few times in Denver where we were both going to school, she at Colorado Women's College and me at the University of Denver. Greg served in the Army during Vietnam and returned to find his father very sick. By this time Ben had been the state rep in Boston for a few years. When Ben died Greg served the remainder of his father's term. This was short lived as Greg was voted out in the next election so then took over where his dad had left off as a fisherman. For many years Greg served as caption on their fishing boat out of Menemsha, Skipper as one of the crew and Jonathan as a spotter pilot in the hunt for swordfish.

As time wore on and the local fishing industry died out the Mayhews adapted by     fishing for other types of fish and Skipper became a clammer. Eventually Greg sold his boat for scrap. He died last year. In a metaphor for change the Mayhew house we called "the big house" on the hill overlooking Clam Cove in Chilmark was sold and now is being renovated, which these days almost always means a complete teardown.

I played in that house as a kid, rode a rope swing in the barn with Skipper and Greg and watched on the Mayhew's living room TV as Neil Armstrong first stepped on the surface of the moon in 1969. 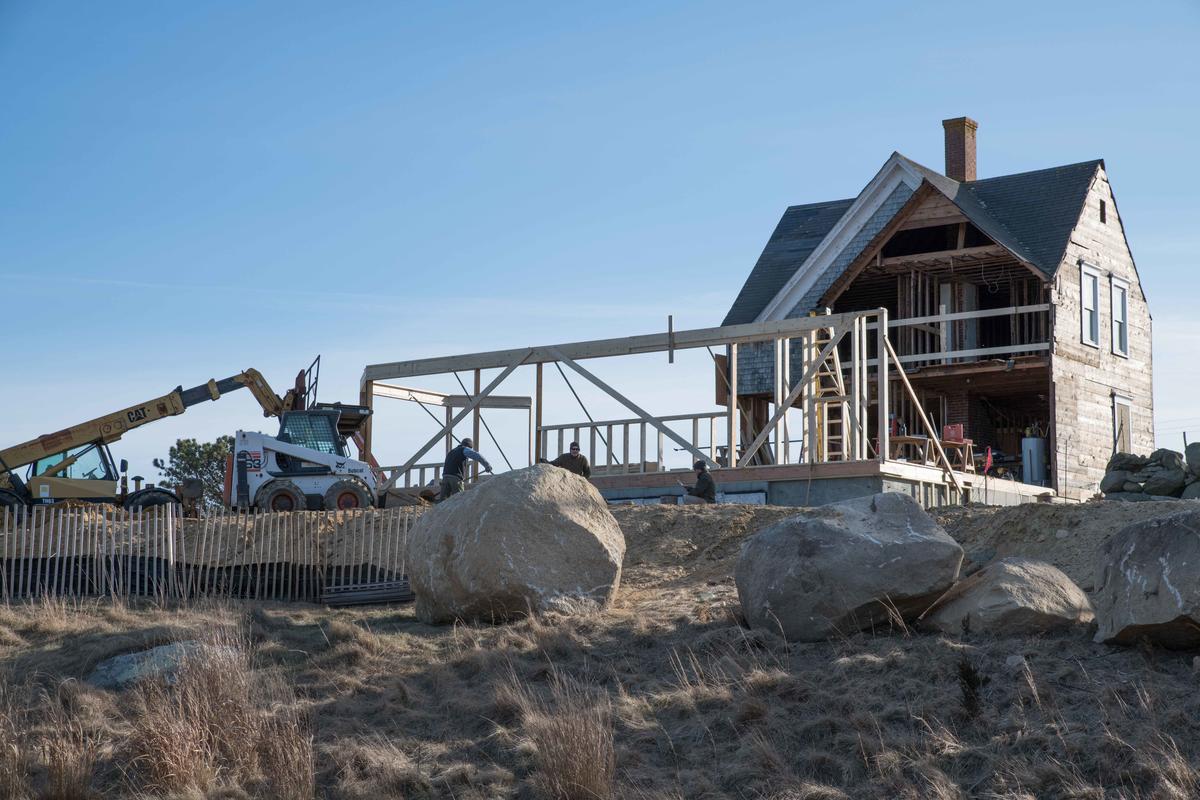 The Mayhew's Big House, now almost unrecognizable, serving as a symbol that nothing stays the same. I was on the island for a couple of days this past week and was struck by how much construction there was, how many cars were on the roads, how many restaurants were open in mid February. Big changes on these coastal islands.

Made in the early summer of 2018 of the small fishing village on Martha's Vineyard called Menemsha.

To contact the photographer about these photographs or any others on the site please email Neal Rantoul directly at:

Made the week after the horrendous shootings in Las Vegas in September 2017.

In the center of town, the American flag was flying at half mast outside the police station.