When I started to show in the late 70's in the Boston region a review in the Boston Globe was the benchmark by which all other press coverage was measured. As my teaching career progressed in the 80's and I was under consideration for tenure, no review in the Globe was tantamount to no show at all. Was a bad review better than no review? Probably. All I can say is that I got tenure and there were a couple of reviews in there that were less than glowing.

Now I believe that has changed big time. Do you read the Boston Globe? Do you read it online as the free Boston.com, subscribe to the paper version or read is as   BostonGlobe.com?  I subscribe to the last one but I still don't read it all the way through. I would say I read maybe 1/3 of the photo show reviews written yearly in the Globe, if that. I've even missed a few that reviewed shows I was in. There are now so many places for work to be reviewed, mentioned, blogged about, Facebooked, Tweeted, etc. 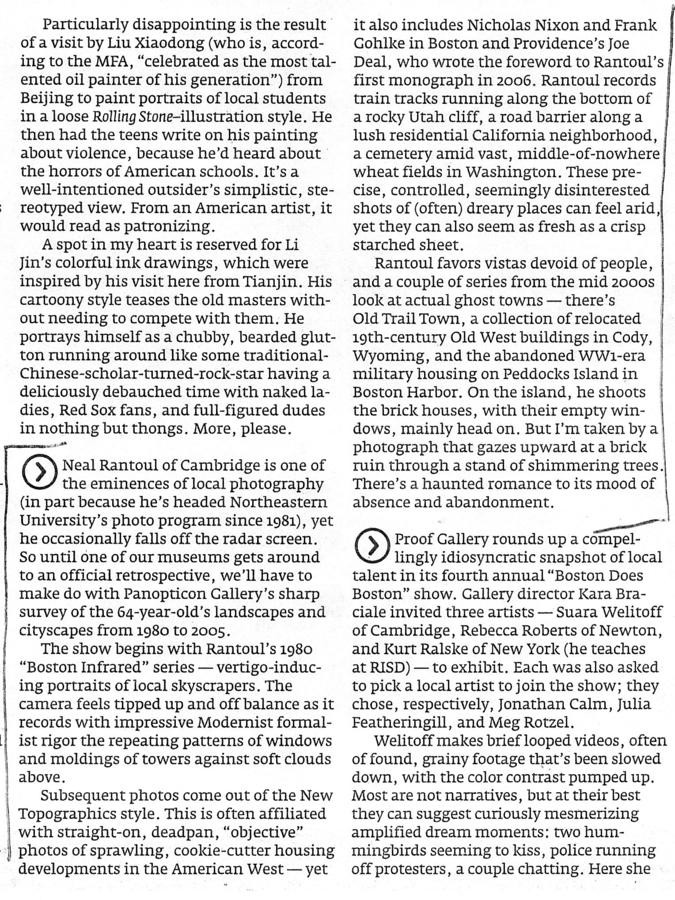 In another aspect to showing, the announcement card was THE way people would know about an upcoming show. Perhaps a poster counted too, but think about it: how did anyone know a show was coming? The card. For a one man show I had in about 1980 at the Addison Gallery of American Art in Andover I found myself on press at Thomas Todd printers, perhaps the premier press in the area and certainly one of the top presses nationally, to oversee the print run on announcement cards they were printing. After several hours of tweaking an image that was being printed about 2 inches across I signed off and they ran the cards. Now you pay about $100 and send your file off to Modern Postcard to make a card for an announcement. If there is a card printed at all. Jason Landry of Panopticon Gallery doesn't make cards much anymore. He says there are so many ways to reach people now, the card is superfluous.

But back to reviews. Ever notice how a review is mostly a skim through a show and that it is very seldom either scathing or glowing? Newspaper reviews for the most part serve these days as notification of a show's existence rather than a real in depth criticism of an exhibition.

In the end, yes, it is a very good thing to get a review from the city's primary paper. And yes, it can be helpful for those needing outside validation of their show. This is one of the ways promotion committees determine an artist's impact. Finally, more words written about your show the better, but nowadays it is probably most important to get the word out about your show from many many places, some of which you can do yourself.

What about national reviews? A piece in the New Yorker, the NY Times, an art magazine? Great, go for it. But these are not in my realm of experience.

One final thought, and this from someone who has had so many shows it is a little ridiculous: exhibiting your work, getting it up and on some place's walls, be it a big prestigious museum or in some coffee shop down a back alley in a small town is good. It is, after all, presumably why you do what you do. It fulfills the need to get the work seen. But shows are ephemeral, they are only on someone's mind, for the most part, when they are up. Whereas a review of a show, or a write-up on a popular  blog can go on and on and have a far longer life. This is the same rational used for making a book of your work. Ah books, I will save a discussion of books for another post. So much to write about and so little time.