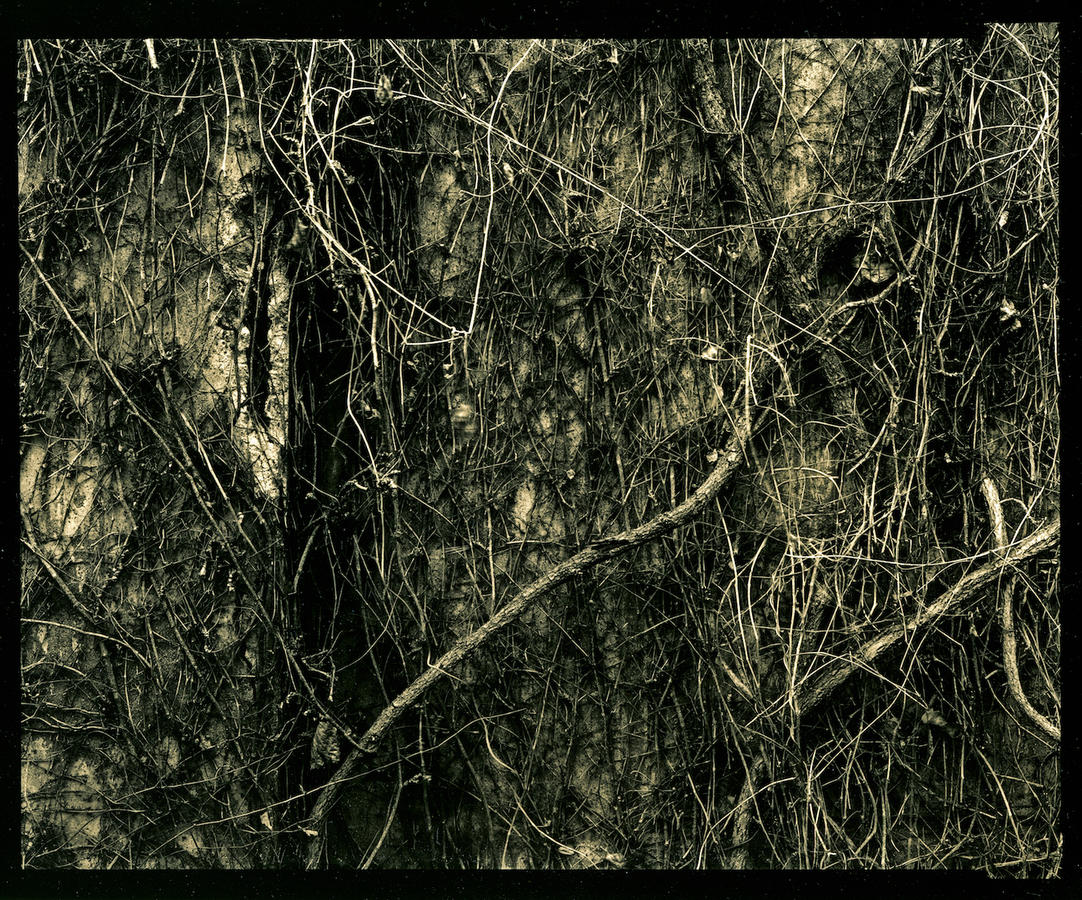 The second blog I wrote, now seven years ago, concerned some 8 x 10 photographs I had made in 1982 from Mt Auburn Cemetery in Cambridge, MA I lived in Cambridge from 1975 until last year.

Ostensibly about a wall covered in vines, the work has been shown many times over my career. There is only one set. They are 8 x 10 contact prints on Kokak Azo paper, toned with gold chloride. Azo paper is long gone. They are, simply enough, irreplaceable.

In 1982, married and with a new baby (and a new job), my wife and I traveled to her home town of Lugano, CH where she grew up. We stayed with her parents and I gave them a print from the Mt Auburn series as a house present, inscribed "To Isabel and Fernando w/ love, Neal Rantoul, 1982". I never saw the image again. It was not included in any subsequent shows the work was in. Now, 37 years later, it has come back to me, reunited with the ten others to make an eleventh after all these years.

Micaela and I divorced in 1986, her father Fernando died of a brain tumor about ten years after that and Isabel died a few years ago. The work I gave them during those years came back to me recently (see Swiss Portfolio), thanks to my ex-wife and my daughter, Maru.

Funny how things happen sometimes, isn't it? The full circle nature of this image being in Europe all these years, sitting in some drawer or on some shelf in a case, insignificant and probably neglected, no ripple of consequence or recognition at all, to be shipped back across the pond to Boston and to me, to be joined with its partners and collaborators, the set incomplete all these years, now made whole.

Let me place the making of this work in context. This was a breakthrough time for me in terms of my own work. I was immersed in the making of all kinds of photographs but the effect and power of forming bodies of work that would narrate was new and fresh. In many ways, these were the first bodies of work that established that I had my own voice, that shrugged off the effects and influences of graduate study and where I was making my own statements. In this period I made the Nantucket series, the Yountville series, Boats, Mountain Work, Southshore and Fences and Walls (all on the site along the bottom row in the Gallery page). However, though I had begun working in 8 x 10, I was not making series work in this format. For the most part, the concept of making series work in 8 x10 ran counter to my practice. There are really only two using the large camera. The Mt Auburn pictures and another set called "Cambridge" from quite a bit later, in 1994.

Just this week in the studio, we have framed the long-missing image the same as the others as though there was never anything lacking from the set. The series is now complete. This creates a tremendous sense of well being in me.