Railing. As in: "railing against".

This one's really going to get me in trouble but I simply can't take it anymore. I am talking about on-line photo contests. This one is in the current issue of PDN (March 2015 pg. 26) asking for submissions to the "Curator Awards". The grand prize winner gets $3500 and winners will be published in the July issue of the magazine.

Take a look at the submission page: 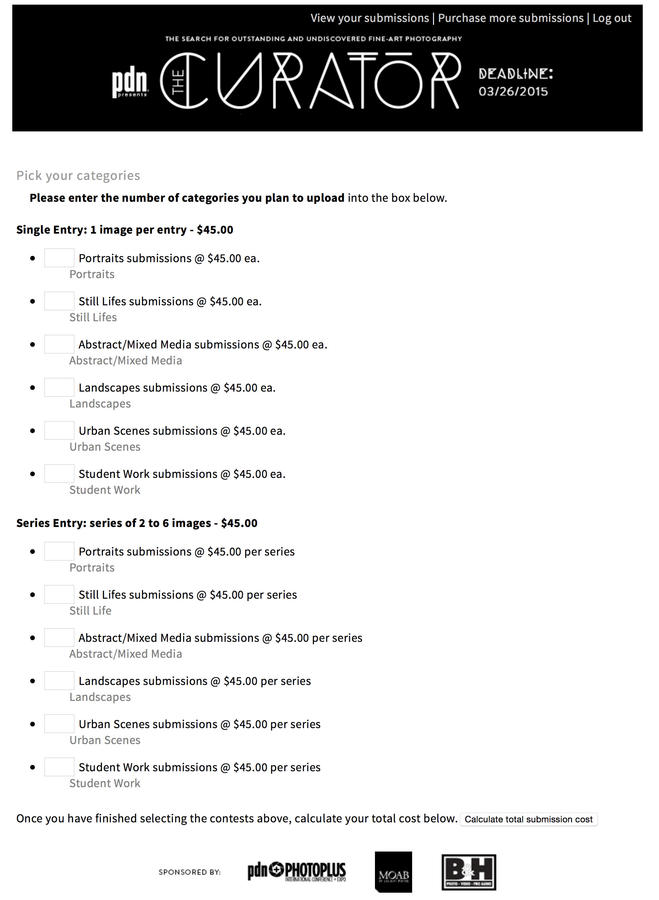 $45 a pop for a single image? Or even $45 for up to six in a series? Seems a little steep, doesn't it? Let's break this down. This is a magazine you pay to read, and note the contest has sponsors. Makes you wonder what they're sponsoring if not the contest. On top of that, you are being charged to submit. Let's be clear: this is a  magazine charging you to create content for itself in the July issue. Doesn't magazine content usually mean that there is a photographer being paid for his/her work? In effect, you are paying for the chance that you might get published and the vast majority of applicants will get nothing at all. Even if you did get published, there will be no exhibition of the winning work. Something is very twisted with this picture.

Don't get me wrong. I like PDN and subscribe to it for its news about the industry and trends in content and also reviews of new gear. But submit to a contest like this? I don't think so.

PDN is not alone in this practice but watch out. Say you did submit and did get published in the July issue, it would be unlikely as the sole winner, probably as a runner up. What would one picture printed as a thumbnail get you for your submission of $45, or $90 or more? I don't think it would do much for your career.  Do I sound cynical? You bet.

Paula Tognarelli, the director of the Griffin Museum of Photography nearby in Winchester, MA just wrote in Facebook how she judged a contest recently,  selected the winners and then the organization she judged for changed the winners.

As photography gets bigger there is more of this now.  Like I said: watch out.