Ever dribble sand at the beach to make a sand castle?

That's what I think of with these photographs of Pudding Rocks. 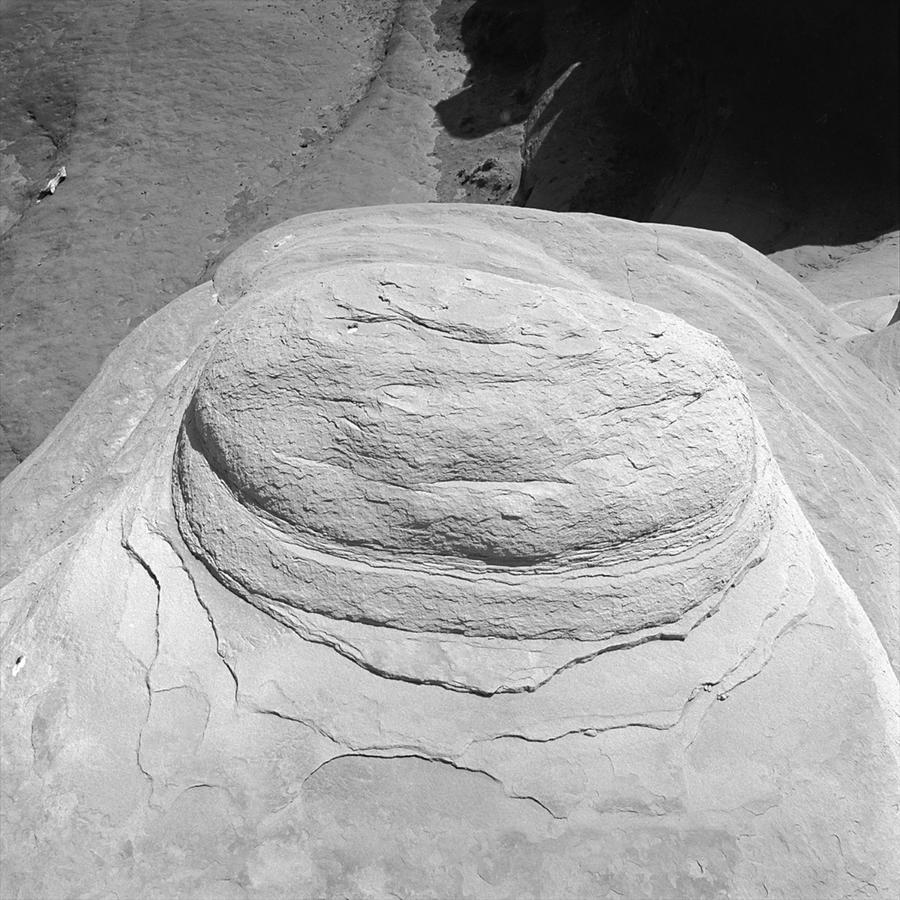 I just put these on the site: here

These photographs fit into the category of "series made but not added to the site yet." Now they are.

These were made on a sabbatical leave-based trip to Las Vegas for a Society for Photographic Education(SPE) conference in the winter of 2001. I flew out a week early, rented a Jeep and headed east to places like Escalante, Hite and Hanskville, Utah to photograph. I was working in 8 x 10 and 120mm formats, in black and white.  I was photographing mostly along the edges of Lake Powell, but did spend a couple of days in Moab, the first of many trips to shoot there. 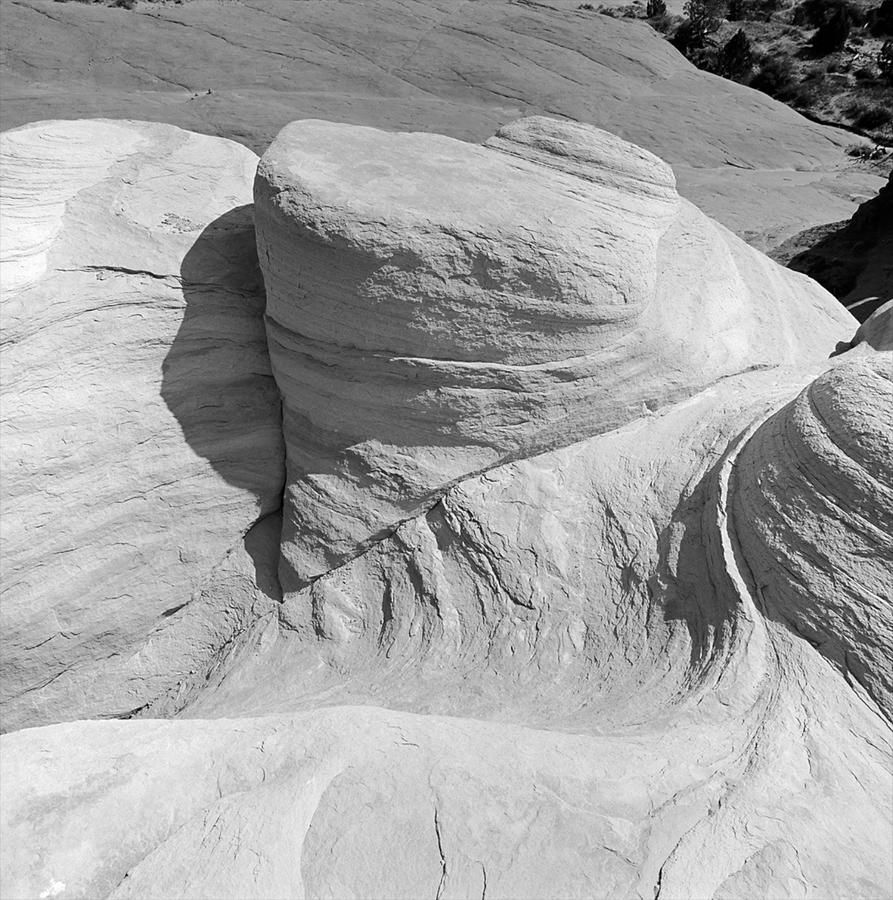 These are a sequenced series, as most of my projects are. 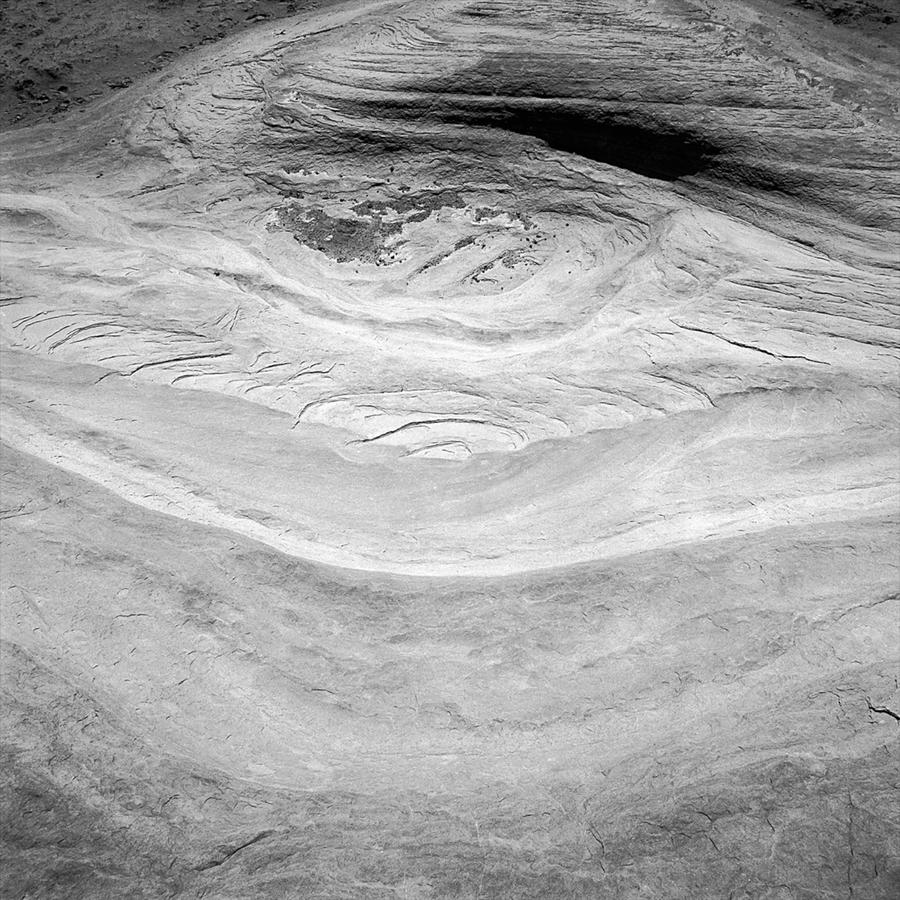 The Pudding Rocks pictures came at a time when I was still working serially in this format. This is the same camera and the same fixed focal length lens I used to make numerous other series: Nantucket, Yountville, Oakesdale Cemetery, Summerhill, GA, Portland, ME and so on. I believe what I thought when I discovered these amazing rocks was that there was an inherent challenge in working with something very different within the given discipline that I established and defined a good twenty years earlier. Plus they were so fluid and organic compared to the others which were man made, rigorous and fixed. 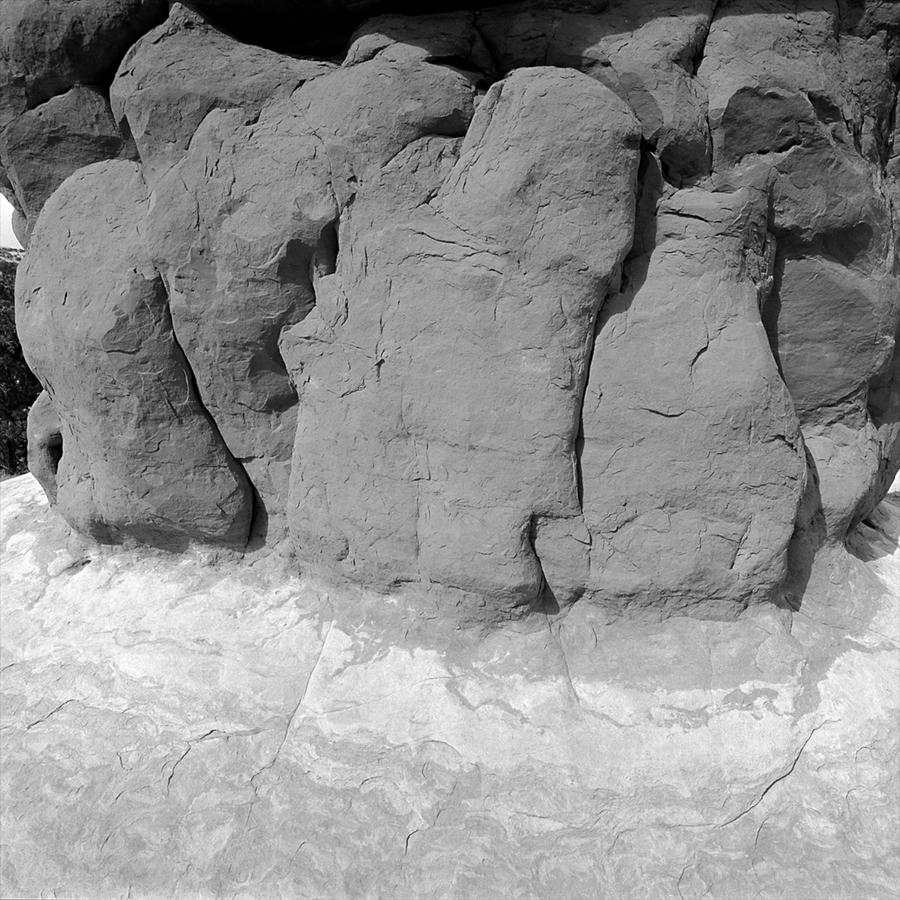 I think as I grew older and more secure in my position as an artist I also was stretching out some, secure enough to take risks more. After all, at this point I had no shows, no gallery, no curators clamoring to see work, no publishing coming down the line, so why not? What I did was to simply make pictures of things I wanted to, with no real thought of consequences, the politics of photographing this or that, the implications of, in this case, photographing something as cliche'd and over done as weird rock formations out in the dessert. So, I made these out of  genuine interest in these incredible forms, not through some calculated, pre-thought out rating as to their place in my life's work. Thank goodness I had the freedom to do just that. 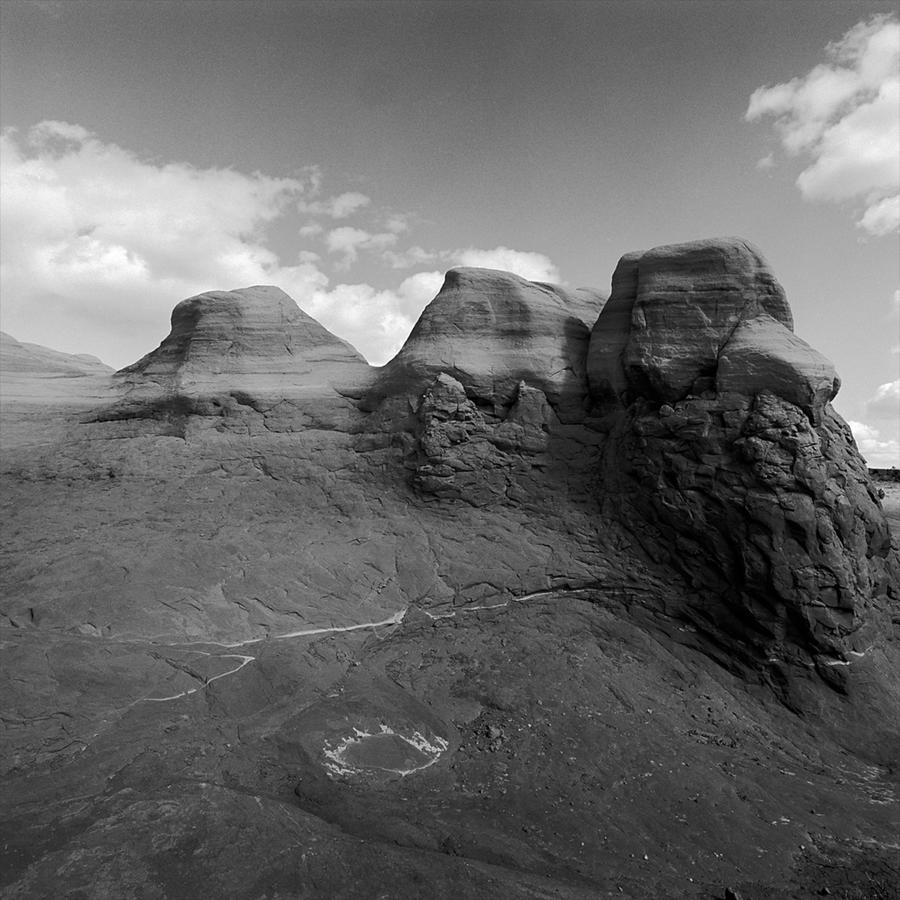 This is an aside but be careful what you wish for. Because of almost a complete lack of notoriety I was completely free to follow any and all ideas I had about making pictures. Of course, I had shows, did present work to people in decision making capacities and so on, but had I been more successful I would have had a harder time making the pictures I wanted to. Gallery and museum exhibitions past and future can impose a certain mind set that is different, a certain pressure to think through pictures you made and are making with a biased view. We all seek approval, someone's nod that this is really good or beautiful or significant. But watch out for this, this seeking of praise for your work. It really shouldn't have anything to do with the work, should it?

Friend and colleague Alison Nordstrom has written about this  in terms of my work but it is relevant here: I wanted to see what these would look like as photographs, more specifically as photographs made by me. These whites, these grays, these blacks, these forms, these marks, this weight, this sky, this depth, this juxtaposition, these textures. This is a sheer pleasure thing, based upon a love of my chosen medium, the extraordinary thing it can do in the hands of someone who knows what he/she is doing. 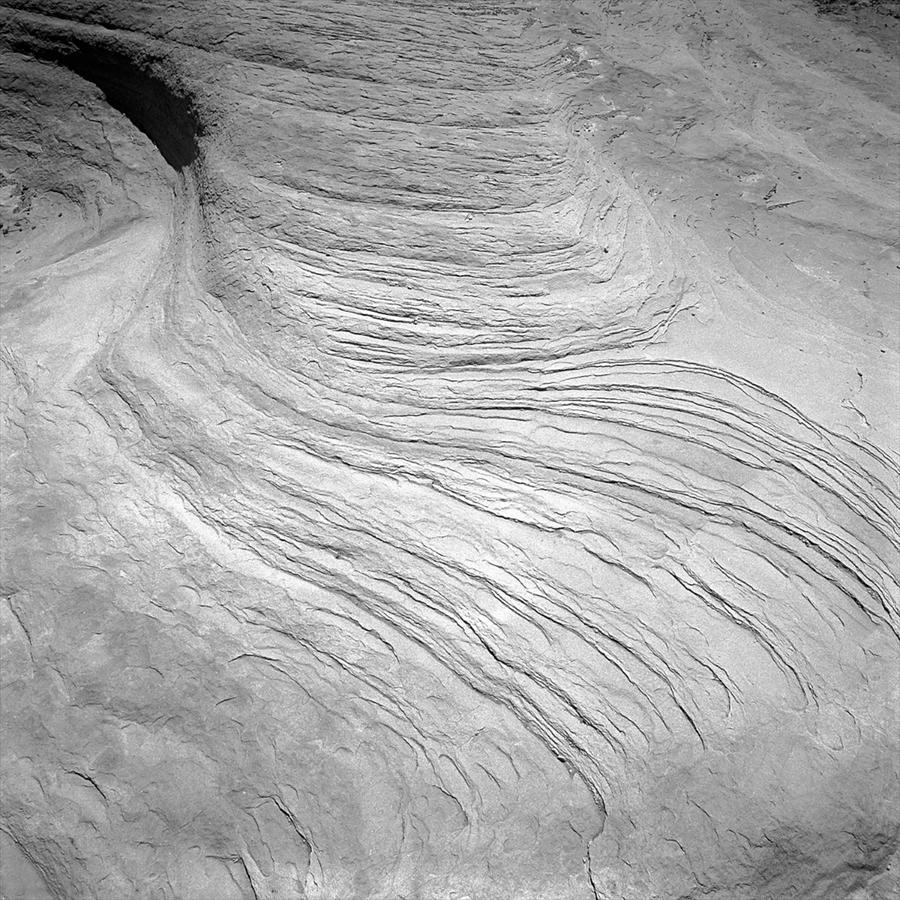 Again, the full series is on the site. 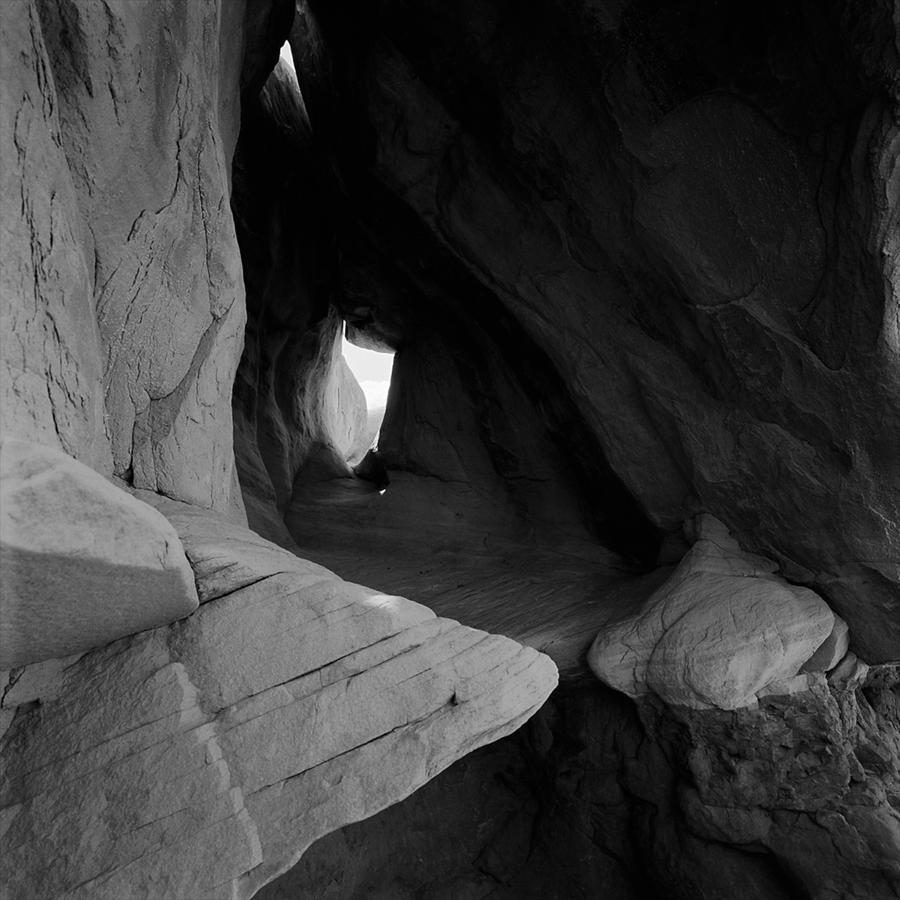 Or rich and full, redolent with meaning and beauty, elegant and significant?

Made in the late winter on a trip while on sabbatical leave to Las Vegas for a confernce. I flew out a week early, renterd a Jeep and headed off to Utah to photograph. Places like Escalante (close to where these pictures were made), Hite and Hanksville  and down into Moab for the first time. I would returnt to Moab in subsequesnt years.
The prints are archival inkjet, about 12 inches square and made in an edition of 1. The photographs were shot on film, then scanned, then inkjet printed.