Liz Ellenwood is a photographer/artist who's been out of school for just a few years. I first met Liz when when she was interning at Panopticon Gallery in 2011. I was delivering my work to be hung in a show and she was tasked with unpacking it and setting it up to hang. We've been friends ever since.

Elizabeth Ellenwood is a recent graduate of the New Hampshire Institute of Art where she received a Bachelors of Fine Art in Photography. Upon graduation, Elizabeth moved to Boston, MA to pursue her interest in fine art photography. She currently works as an assistant to architectural photographer Peter Vanderwarker and as a darkroom assistant at Panopticon Imaging. Her photographs have recently been exhibited at Panopticon Gallery in Boston and at the Plymouth Center for the Arts where she won the Lexjet Award for Best Print and Presentation. Her work will be included at an upcoming group exhibition at SOHO Photo Gallery in New York City in March 2013. Elizabeth’s photography is a part of the New Hampshire Institute of Art’s Permanent Collection as well as private collections throughout New England.

Liz has had the requisite jobs that weren't photo related since leaving New Hampshire,  among those serving hamburgers (she is vegetarian), hostessing and working in a café.  Now, at the ripe old age of 25 she assists for Peter Vanderwarker, one of the top architectural photographers nationally, and also works for Panopticon Imaging as a gelatin silver black and white printer. Not bad for being so new to the game.

She also is a wonderful artist. Her primary interest is in large format black and white with a foundation of photographing architecture. This week Liz and I spent few hours together going over some new work she is very excited about. We also looked at where it was coming from and where it was going.

This is what she has to say about the work:

It is my grandfather’s abstract paintings that inspire my present approach to photographing architecture. His simplification of objects into geometric shapes and the purposeful disorientation of the viewer spark an important question for me: who says architecture has to be documented with a clearly defined foreground, background, top or bottom? What I have created is my reaction to this question.
I have made in-camera multiple exposures of any structural forms that I find interesting without concern for straight lines, readable outlines, or the intended purpose of the structure. An entirely new composition is created when rows of financial buildings become overlapping textures of light and dark merging with other abstractions. Each layered image creates a confusion of depth, space, and time which offers visual possibilities and interpretations for the viewer.

I asked her what got her started making these multi-planal and complex pictures of man-made forms. 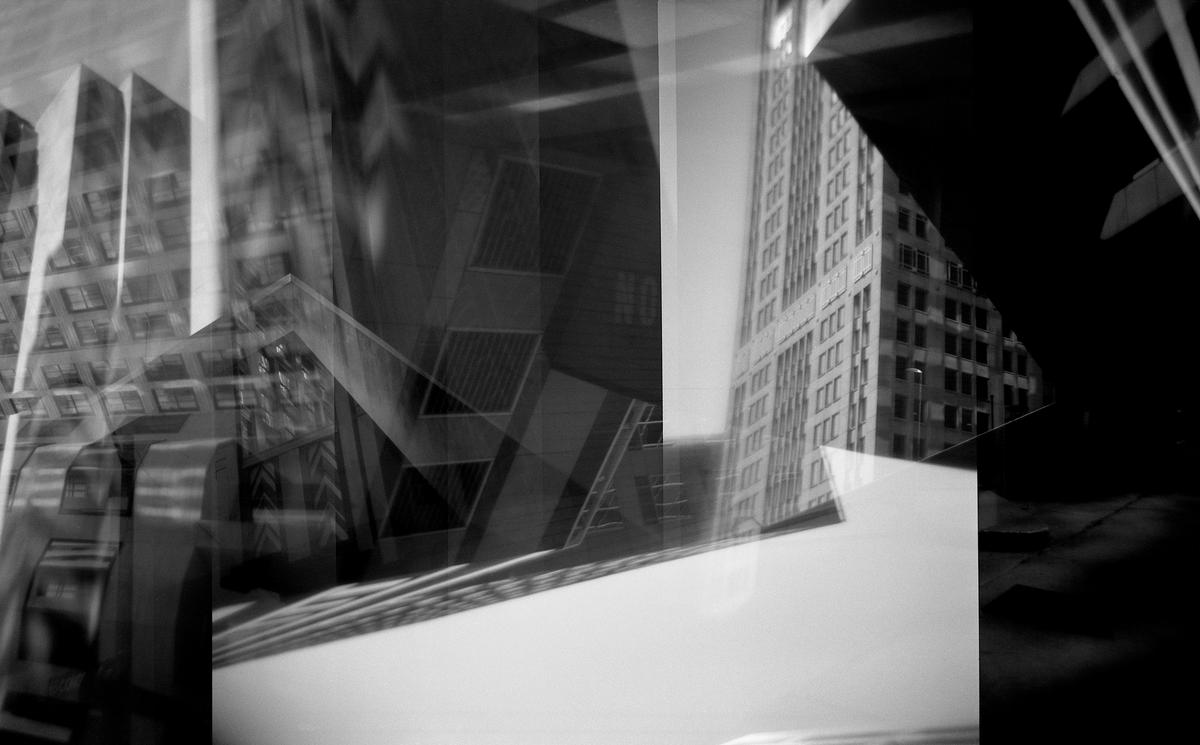 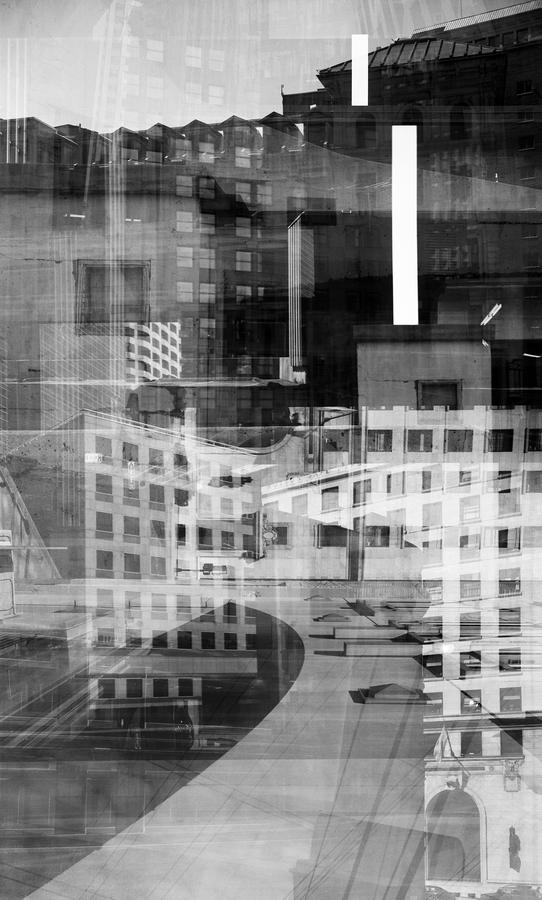 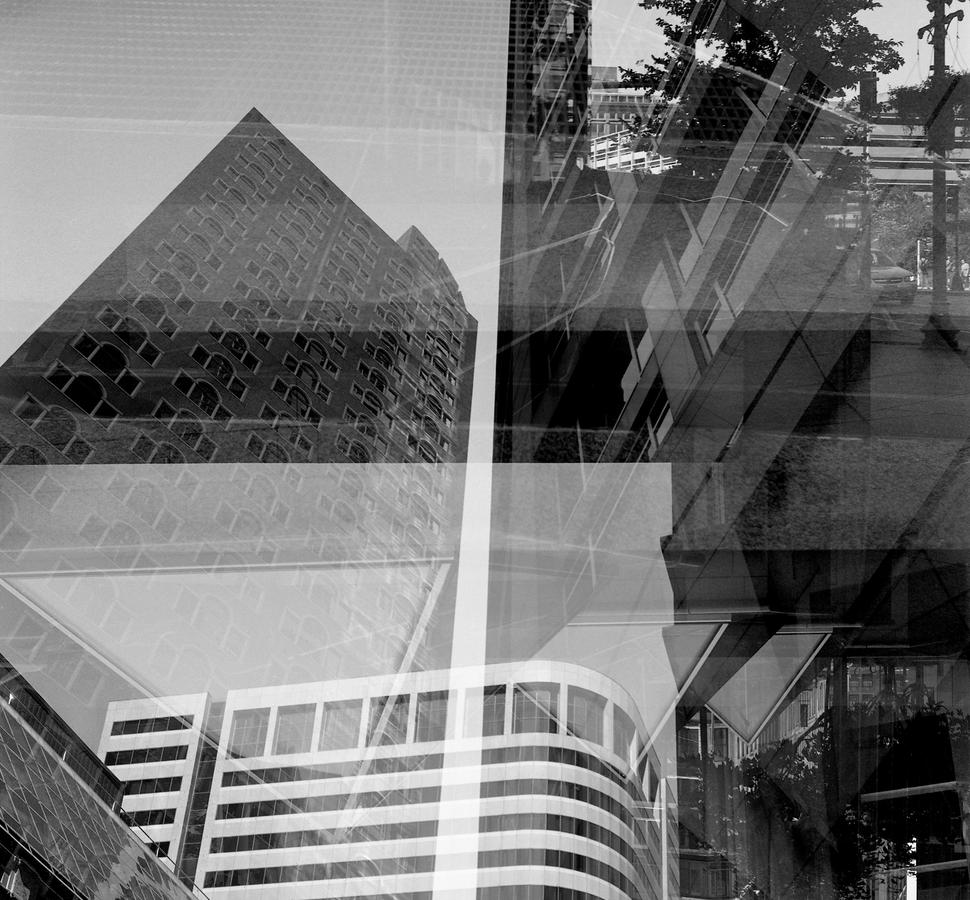 She said she wanted to take her photography to its next level, meaning to impose a level of personal interpretation and exploration to the content of her pictures. Notice I didn't use the word "control", that's because she very specifically wants to allow her pictures in this project to be less about knowing and more about finding out. Working with 120mm roll film, she shoots strips, building up exposure that overlaps previous frames. In printing she simply chooses what strips to print, so that sometimes the pictures take on a characteristically panoramic look and at other times they are rendered in a conventional rectangle. The pictures are inventive and nicely informal.  Liz speaks about how she can't really see what the pictures are like until later, when she processes the film. Although her process is analog, she does use the scan of the strip to look at it on a monitor to find where she wants to start and stop the frame. 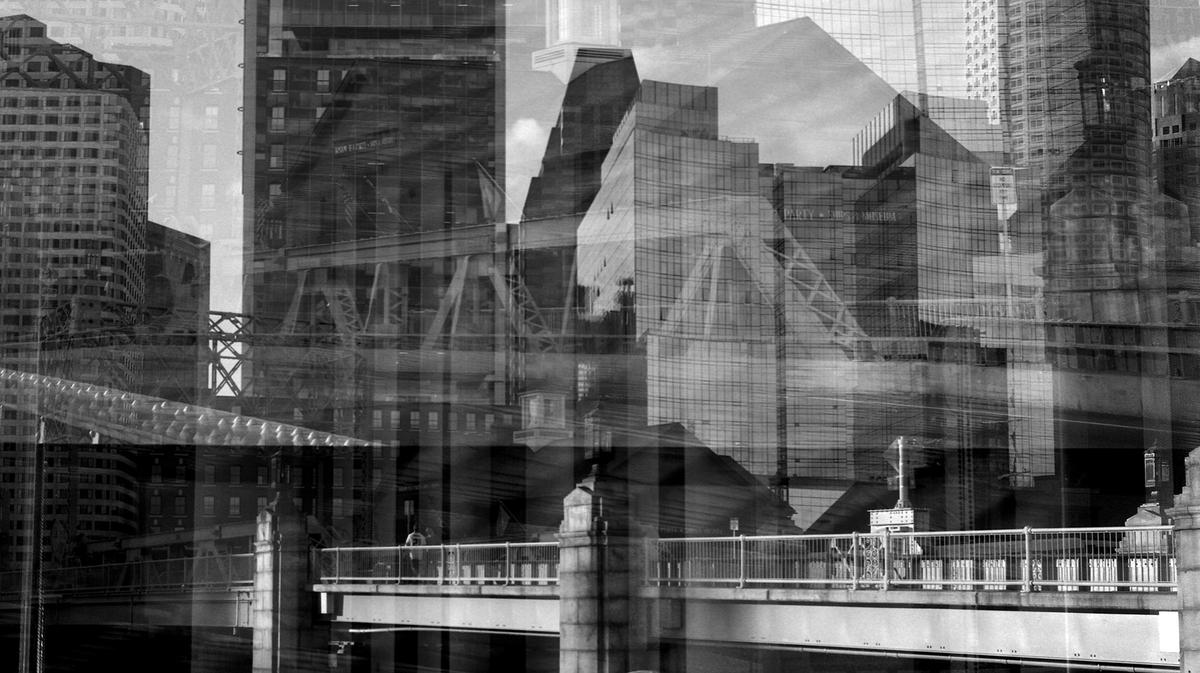 So much of contemporary photography that we see online is about making pictures as some sort of literal interpretation of what's in front of the camera. Not this project by Ellenwood. In the progression from student to "just out of school" former student to adult and active, viable and contributing artist, Liz Ellenwood has made excellent progress in a very short time. The pictures seem, to this writer, like assertions of creative intent as opposed to documentation or interest in just architectural form and structure. 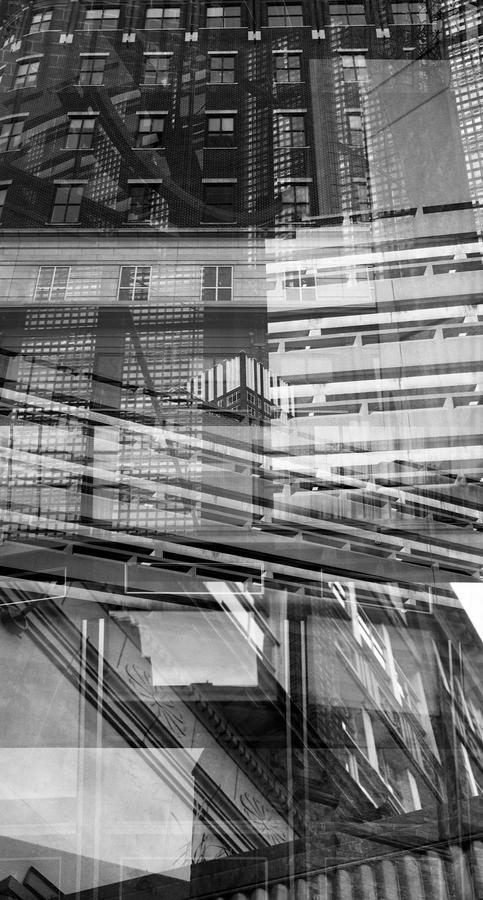 Although Liz isn't one to weigh the pictures down with unnecessary analysis she is clear on one point: they are as much a discovery for her as they are for us. I find this admirable in that it is part of the process of growth to make pictures to learn about pictures. She also has the added advantage of being schooled well in art and photography, knows the concept of and the players in Cubism and can reference the more modern force of  paintings like those of Richard Estes, a super realist with a decidedly Cubist proclivity. 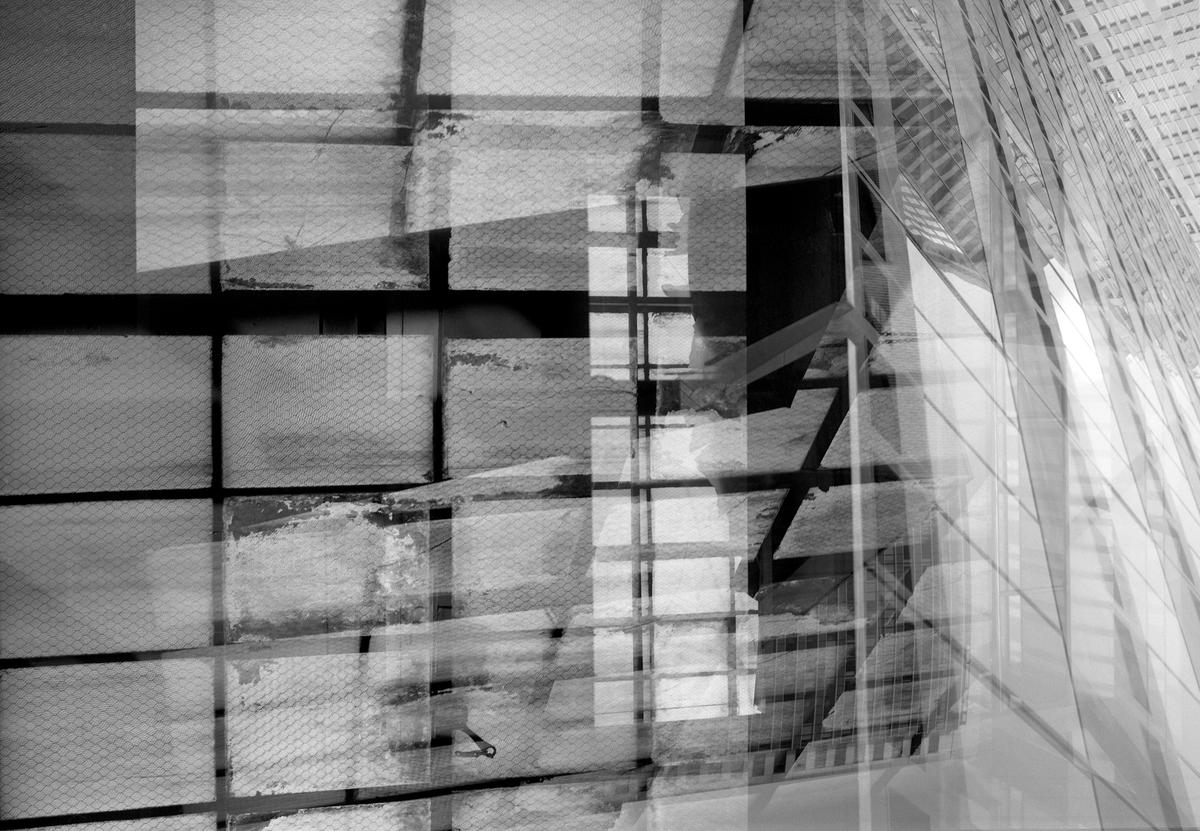 As we were starting to wrap up the interview I asked Liz where this was going. Did she have an outcome in mind? Besides working to get them shown and/or seen, no. It seemed okay to just make them, to look at them, to share them with others that might give insight and feedback and to learn to let them lead her to the next place. Intuition plays a large part here and it is very good to be able to trust your instincts and let something roll. Liz projects confidence, humility and curiosity, in about equal measure. 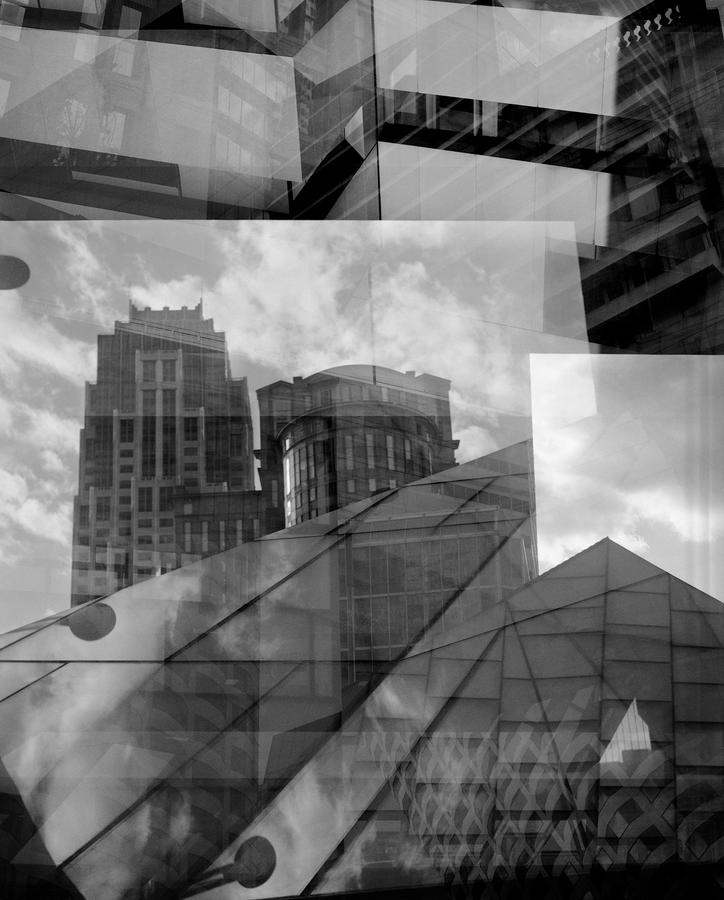 On of the very rewarding things about my profession of teaching and in all the years I practiced it was to help a student understand that it was for them to find out what to do or say and then give them the space to go and do just that.  Liz is on that path now, finding a way to speak with her own voice. It is very exciting to watch it from the sidelines.