Back, way back in the early 90's a couple of students named Andrea Greitzer and Scott Merritt came to me with a proposal to check out a 4 x 5 view camera for an extended period to do a photo project. I no longer have in my mind what that was but it may have involved using a camera over the summer and making pictures in New Hampshire. Extended use like this was definitely against the rules. Cameras would be stolen, lost or be broken when returned in September. But they made a compelling case, claiming they were part of PFAYVA. I had never heard of this. It turns out Andrea was a graphic design major. They presented me with a letter that looked very official with the logo right up there on top stating what the organization was. I kept it and here it is: 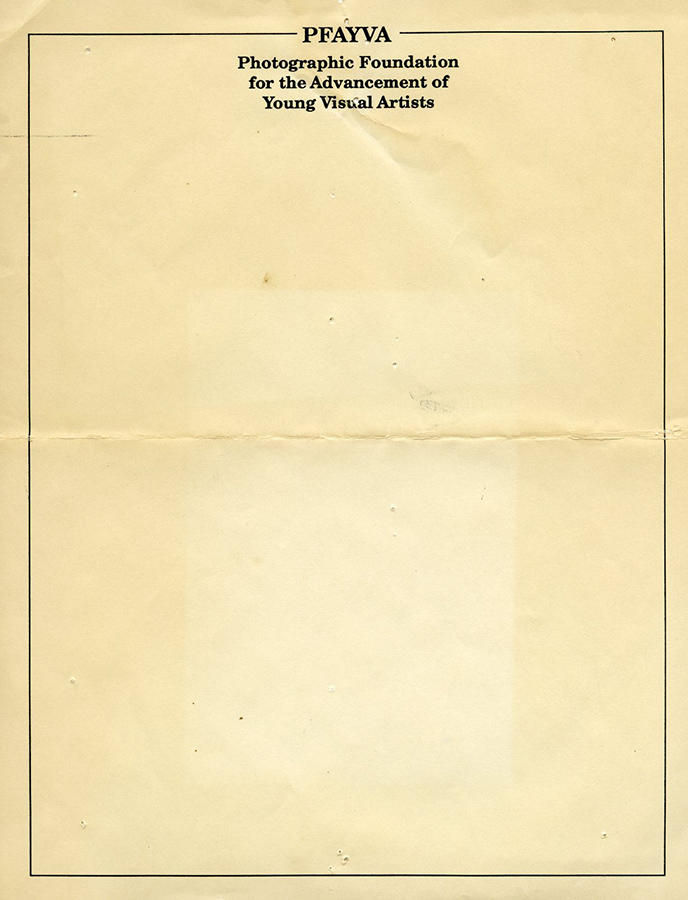 a little yellowed with age as it was pinned on the board above my desk for almost 20 years. Being members of the  Photographic Foundation for the Advancement of Young Visual Artists, which they started, got them the camera they wanted for the summer. Although there never was an actual student group called PFAYVA, all special programs and various photo trips with students became known at Northeastern as PFAYVA programs. PFAYVA turned out to be the longest lasting, most effective and popular student centered program on campus that never existed. Each spring we would take senior thesis students to Martha's Vineyard, Block Island or to Maine and, one time, to Savannah, Georgia. As it turns out PFAYVA also would scholarship students who couldn't afford to come. In reality PFAYVA had no budget (remember it didn't exist) and I was funding them with my own money or discretionary funds from my budget.

Over the years I would drop the term as in: "oh, as a member of PFAYVA you can do that" to students. They would have no clue what that meant but it was my way of telling them they could more than likely circumvent a rule or come on a trip with us that they couldn't otherwise afford if they joined PFAYVA. Being photo students they were already members of the club that didn't exist. Being members afforded them rights and privileges doled out on a discretionary basis by its chairman, which would be me.

Of course, PFAYVA trips were exhausting but a total blast. One weekend we had so many students we booked the whole Youth Hostel at Martha's Vineyard in early April a week before it opened. There were about 25 of us. Another year, at the Vineyard, I checked out a 14 seat van from the motor pool at Northeastern and brought my daughter Maru and her best friend Carlotta along as well. Another year we rented a barn in Vinalhaven, Maine that had a trampoline in it. For the trip to Savannah we stayed the first night in the Youth Hostel but, as it had the world's largest cockroaches, moved to a motel for the remainder of our stay. Waffle House for breakfast was big that trip and Krispy Kreme doughnuts important late at night when the light was on.

One of the last PFAYVA trips we took before I retired was to Block Island. We rented a house in February or March. There were only about 8 of us so we went in two cars. We managed to make pictures in between the snow flurries and found an island pretty effectively shut down that time of year.

My colleague, Stan Strembicki, runs things much as I did when I was at Northeastern. Stan heads the Photo Program at Washington University in St. Louis.

What happened to Scott and Andrea? Scott graduated, married another NU student and now has a family and lives in the midwest. And Andrea now teaches photography at Northeastern and runs a very successful summer semester in Venice each year. Andrea has also designed all the books you see on the "books" page of my site except one, American Series. Her own creative work can be seen on her site: here.

I believe that PFAYVA did serve to advance young visual artists. Thanks to Andrea and Scott for inventing it.