Yesterday's class started off with a look at any revisions students may have made to their writings from the day before. Chris (Benfey) read a passage from his book, "Red Brick, Black Mountain, White Clay" and then we moved on to a very big topic, which was the assignment for the students to first make a photograph then write about that photograph.

Think about this: the power and specificity of the concept to make a photograph  and thinking that you will write about it after making it. This then informs the photograph you are about to make, loads it with significance far more than it may have had initially. Imagine the weight you can place on particular parts of the image through your words. Envisage how you can direct the viewer's eye to something in the photograph, predict the outcome and drive the image to its conclusion rather than leaving it up to the viewer. Haven't you been frustrated by the cursory glance people give your photograph when you've spent a great deal of time on it? Isn't it upsetting when a viewer  "doesn't get it" when looking at your work?

Combining words with your pictures can crush the problem by telling the viewer what your point was, or answer a riddle you've posed in the picture, or explain the circumstances in which the photograph was made. But it also can make you a better photographer for it will cause more deliberation, consideration and thought about the pictures you will make. Almost always, intentional pictures are better pictures.

What was our reference text? What examples did we use to explain the principle? Why,  John Szarkowski's "Looking at Photographs, 100 Pictures from the Collection of the Museum of Modern Art" of course. Nothing better. Szarkowski is perfect here, illuminating and explaining clearly and with great insight, various photographs from the collection, some famous, but some obscure too. 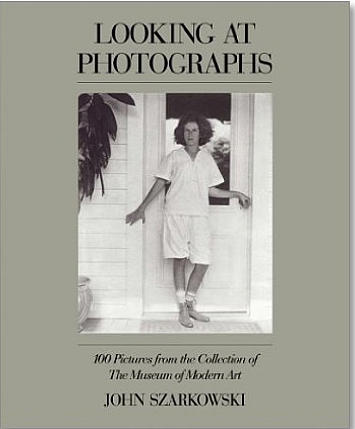 How'd the students do? Well, they struggled with letting it go, with realizing that this was a fundamentally new way to make pictures, one side, the visual, informing the other, the literary. And finally, there is the concept of subsequently writing about the picture, predisposing the picture to be more fully realized. No blame here, as this isn't easy.

What is happening, however, is that we are beginning to see an occasional exceptional photograph and are finding there is some wonderful writing. This is only the second day of classes and so I am very encouraged. This is a very exciting and motivated group of students we are working with.