I know, Newtown surfaces the memory  of the Sandy Hook Elementary School shootings in 2012, an absolutely dreadful chapter in our common American experience and I apologize for even titling this post with the name of the town.

But, long before that terrible day I was in my usual wandering around mode looking for pictures to make and came across an assisted living facility in Newtown and made a series of photographs from it. We will take a look at this series in a few posts starting here.

The series is on the site and, as usual, I recommend you take a look at it before we delve into the work. It is here.

The pictures were made in 1998, towards the end of a long run of making series pictures in the 120mm format, in black and white, on film, developing the negatives in a darkroom myself and making prints with an enlarger and using trays to make prints that are about 12 inches square.

This is another in a tightly sequenced series of pictures. This one has concerns with this place built for people to live in, the violence of carving out the hillside to put it there and how inhumane this assisted living facility seemed to me.

The series starts outside the community, looking in. Clearly it was quite new. 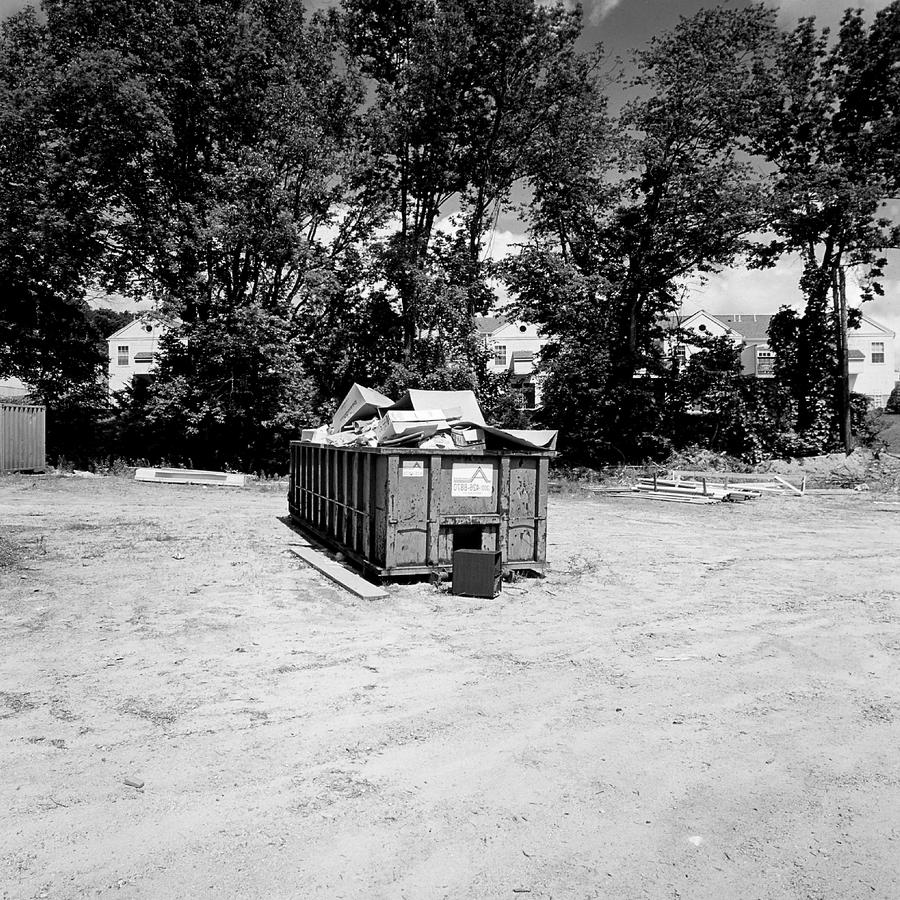 This and the next photograph are lead ins, in that I am trying to build context and hint at where we are headed. 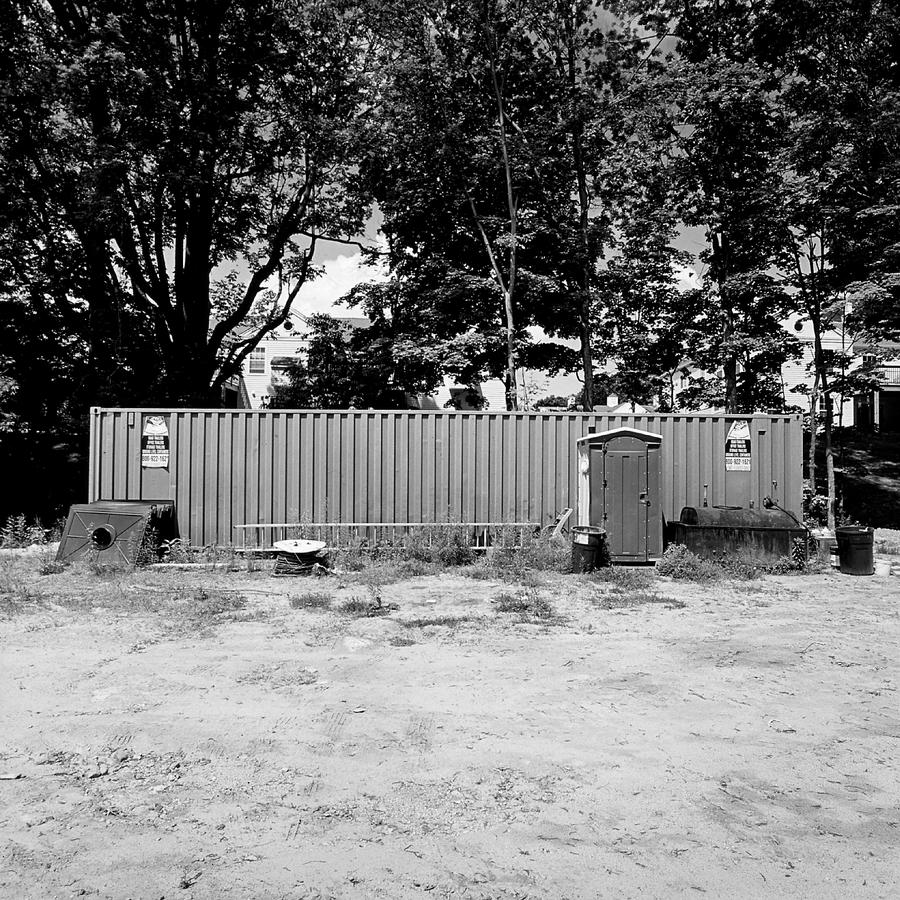 These also embody the idea of being outside and looking in, which reflects a very common photographic and artistic stance; the one of the observer. The two images make another point: the idea of "what's behind the curtain" in that the trees are clearly there to screen this detritus of the construction crew. As we'll see this pervades this place.

Here we are, only two photographs into the series and already we are immersed in content and some substance. And we haven't even really started yet. 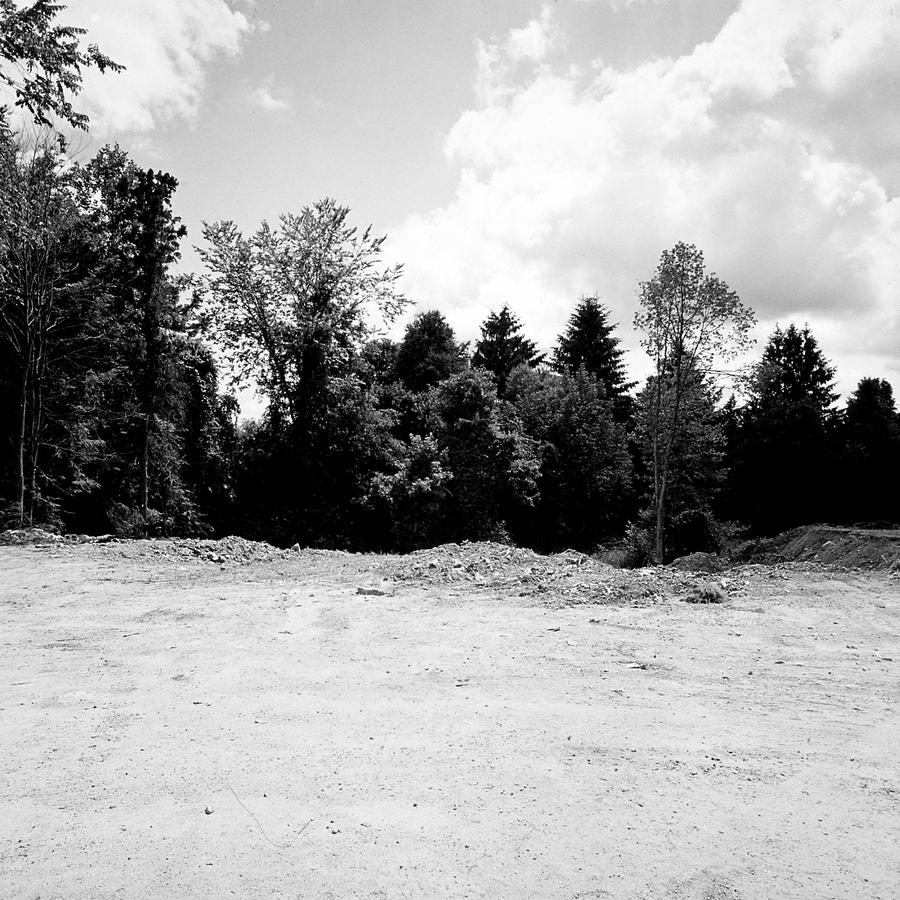 This is the last of the introductory photographs. This is a 180 degree spin from the previous one. This black and foreboding foliage across a scraped and debris littered foreground does not bode well. 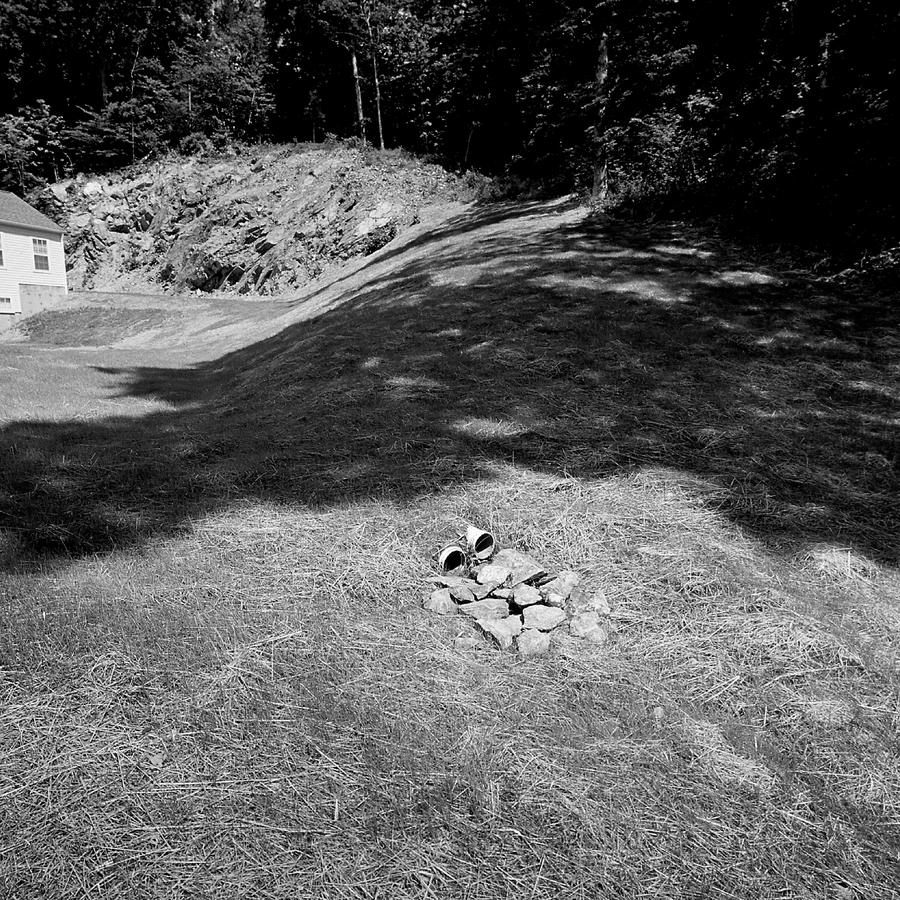 This one is number 4 in the series and once again, I am doing a walk around. Yes, more black trees but with sunlight and maybe some warmth in the building shoved way over there on the left side of the frame. However, due to the wide angle lens I used, the building is falling over slightly. I found something ominous in the two tubes sticking out of the ground in the middle of the frame as though some effluent could discharge at any moment. You can tell that I am working here to build my case to promote my idea that this place lacks  humanity or compassion or any real sympathy with the environment. Would you want to live here? Note the rock wall in this picture. This is where we are headed. 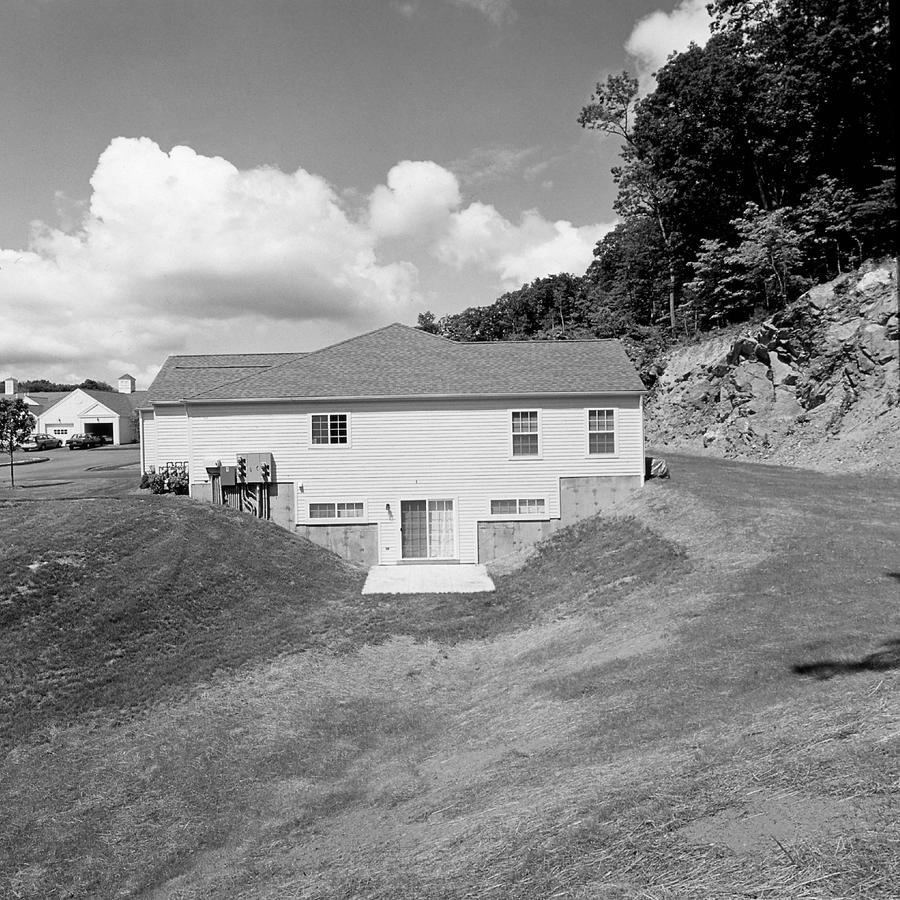 Finally, 5 pictures into the series and we have real content, the place itself and the facade of one of the houses in the complex in a frontal view, exposed and naked, no bushes or flowers. This speaks to the newness of the facility. Why such a long lead in? Newtown turned out to be one of my longer series at 28 photographs so that helps to explain why we've taken so long to get to here.

Let's pause for a minute so I can bring something up. My series work is like no other that I know of. I mean this. This isn't just me saying I'm making something unique to feed a large ego.  I am working to link pictures to pictures, to take us on a journey through a place. So it becomes important for one picture to say something but also to lead us to the next. Why? Because I work in a narrative form to tell a story, to make a point (or points), to lead us through a progression of images to complete a thought or an idea or a concept. And because there are many pictures working in the overall theme of the series, there needs to be rhythm, pacing, timing, introductions, sub themes, primary or establishing photographs, supportive photographs that play a less key role, climaxes or crescendos, lead ins and exiting photographs and yes, even endings. If this sounds like I am composing music or like I am writing a book, then you've got it, you are right.

Back to # 5 The rock is here on the right of this frame. Clearly the crew blasted this rock out to make the housing we are seeing. That's just where we're going. This rock interest is a subset but also succeeds in keeping us moving forward, still on the perimeter of the development. 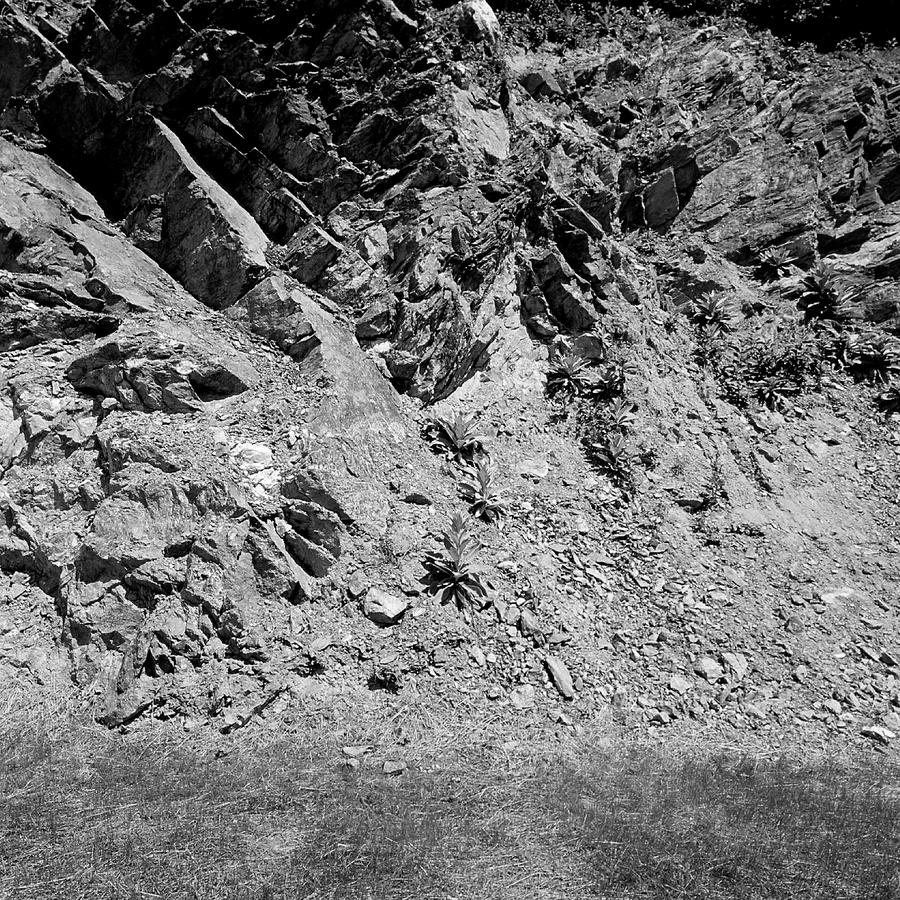 Here we are face to face with the rock wall the builders made to allow the units to nestle in to the hillside. It is sharp, new and brutal. This may be going too far but this is development taking over, configuring the land to meet the need. Notice this isn't just a cliff face we're looking at but that it has grass at the bottom of it. This is because, if you turn around 180 degrees, this is what faces the rock wall: 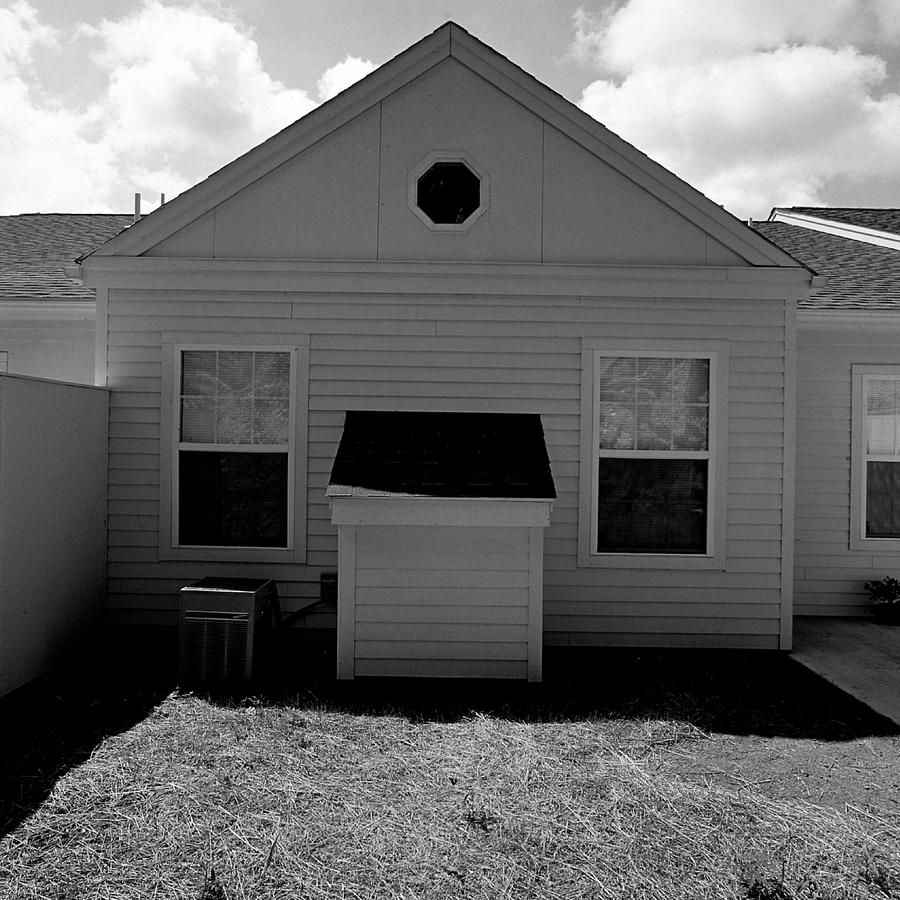 Some face-like structure, the backyard of one of the units. Note, it is slightly tilted, a tactic I've used for many years. 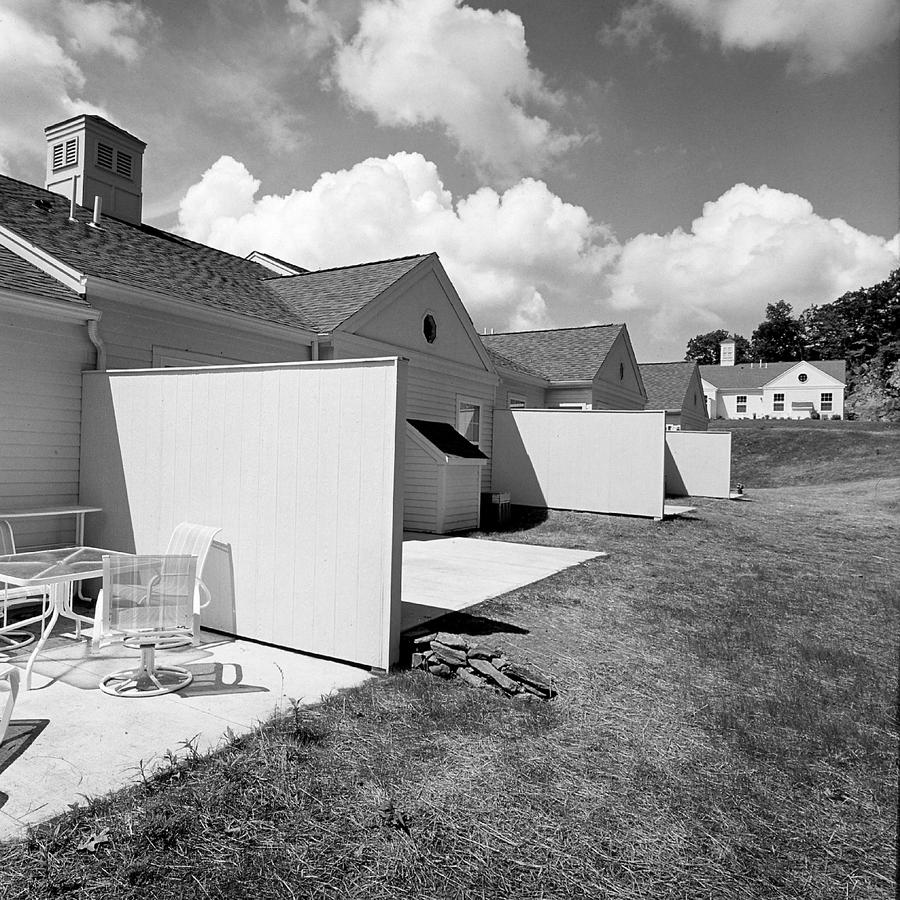 this, which establishes that there are many units in the same predicament, shoved up against a giant rock wall that was blasted out so that they could be built there. Notice I've denied the two together.This was deliberate and, although this is the last picture in this post I think you can predict what the first one in the next might be.

We've also now moved up some in this alleyway of rock face along the backs of these units and are heading eventually out to the one in the background. Notice the big puffy clouds. These have been in most of the photographs in the series we've seen so far. Clouds will play a more important role later in the series.

So far I've used the idea of making a picture of something, then turning 180 degrees to make a picture of the thing opposite of it twice, with, presumably, this one #8 being the first in another pair using the same tactic. So that will make three. Just saying.