Odd to be posting new pictures made almost two years ago but I have spent the last week or so resurrecting this now older work into prints and I am very excited about them.

That is a link to the full series but I will give you a few here too: 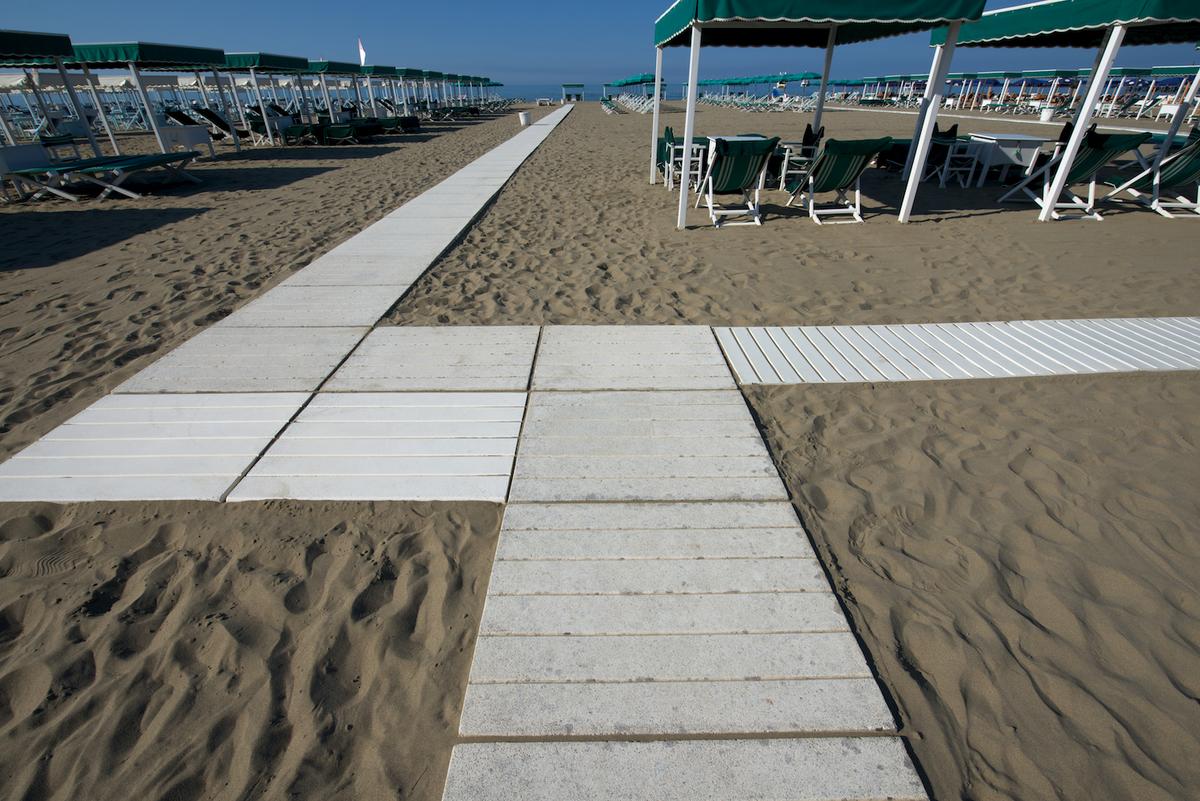 I think of these as being indulgent as they are so filled with the love of color... but I am getting ahead of myself.

In the fall of 2012, still enjoying the newness of being retired, a friend and I made a trip to Italy to stay with close friends who were having a delayed honeymoon in a small house in the hills in Voldottavo, about 20 minutes from Lucca in central Italy. Would I work? Would I make pictures? Could I pull that off in the middle of vacationing, being a tourist, shopping, eating, drinking copious amounts of wine, laughing a lot and overall having a great time? As I packed up my full kit in Cambridge prior to leaving, which includes several lenses, tripod, laptop computer and hard drives, I thought I would soon find out.

How do we resolve this? This desire to go someplace wonderful and then deal with the conflict of the fact that if it is so wonderful, we have this desire and need to make pictures? Luckily for me, I had in my traveling friend, Marybeth, someone who understands this need and is amazingly helpful in letting me go do what I need to do. Without her these pictures would not have been made. Marybeth isn't an artist, but she sure gets my need to make pictures and I am everlastingly grateful for that.

I made four bodies of work while there:

and now printed, Forti Dei Marmi. You tell me? How'd I do?

The deal we struck, Marybeth and I, was that we would go if I could get back to Trieste where I'd shot the stands of trees three years earlier about 30 minutes west of the city near Palmanova. I'd made a series of pictures there in 2009 (Trees, 2009) and I very much wanted to be there again with a camera to make a series  in color.

So, here I was in Forti Dei Marmi, an Italian seaside resort, which was very trendy, posh and managed, with my friends shopping as it was market day and me wandering around, camera in hand, looking for pictures to make. I found myself down by the beach. As so often happens, pictures began to unfold and reveal themselves to me as I walked about. First it seemed to be about the sand and how it is always manicured at "paid" beaches in Italy. Yes, there are public and paid beaches in Italy. The paid ones are always made perfect at the start of each day with tractors dragging along behind them a rake that disappears the previous day's foot prints. So, I worked with that for a while. The sand was flat and rich in middle tan/gray, contrasting with the changing rooms in bright bright colors.

So, from the sand there are one or two transitionals, pictures I make to help get me from one idea to another in a series. 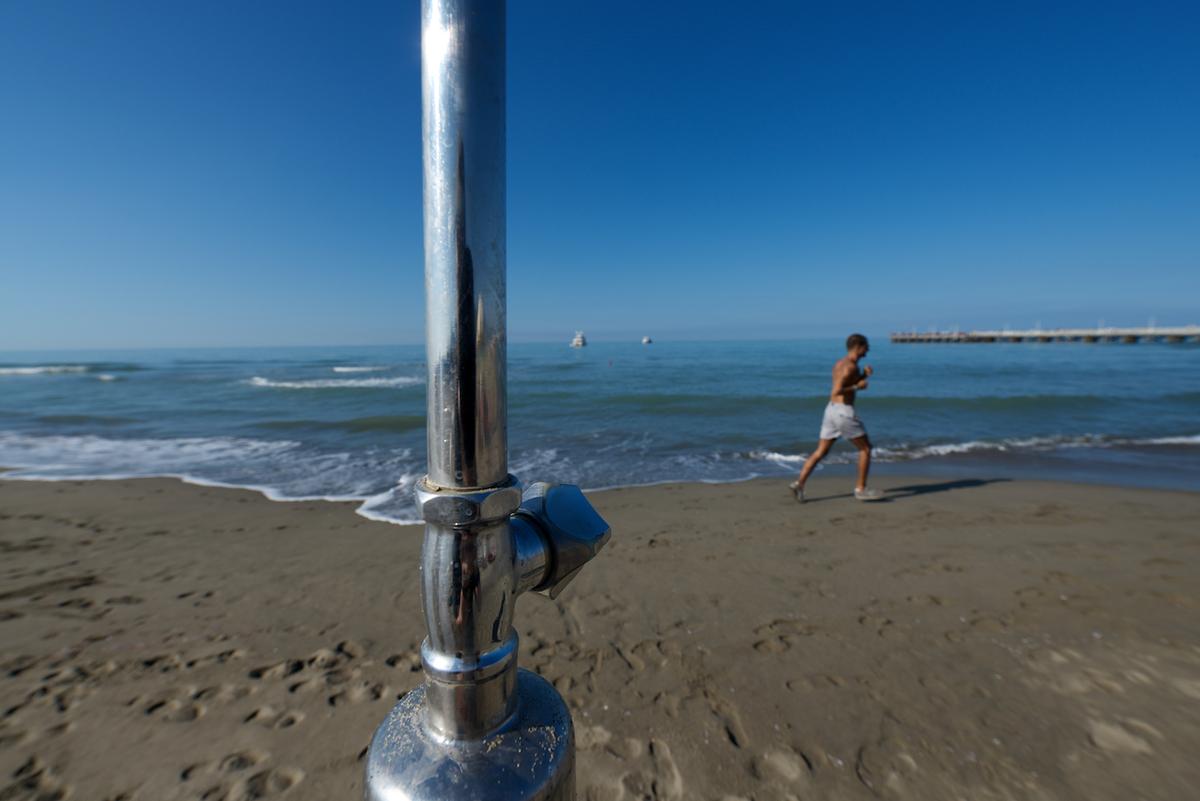 "It was one of those days where if you stood out there looking at the meeting of the water and the sky, if you just let your senses relax and take in this light, this color, this sound, you could, yes, it true, you could feel like you were able to see forever and be at peace with yourself."

I wrote that in the evening after we were back at our hillside home, sitting outside under the trellis at the table where we were about to have a wonderful meal.

From there we move on to these, printed as pairs:

A South African ambles by, carrying his "designer" handbags, as my fiend Gail watches him. These guys are all over Italy and hang out at the touristy areas. It's fun to watch them run for cover as the local police patrol and chase them away, only to see them resurface again as soon as the cops are gone. This was a brief look at reality in the middle of a place that was like a dream.

The pictures move on then to a Pantone wheel of colors, the changing rooms paid beach goers rent to put on their swim suits in the summer: 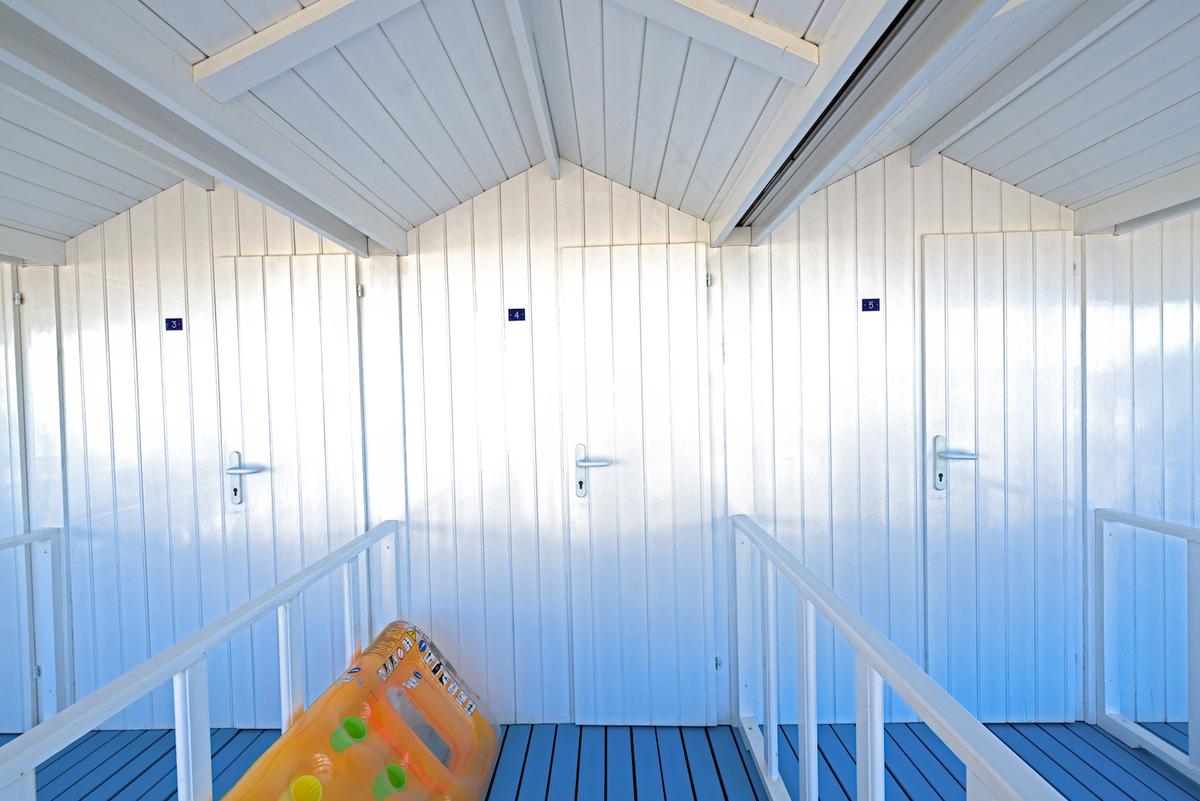 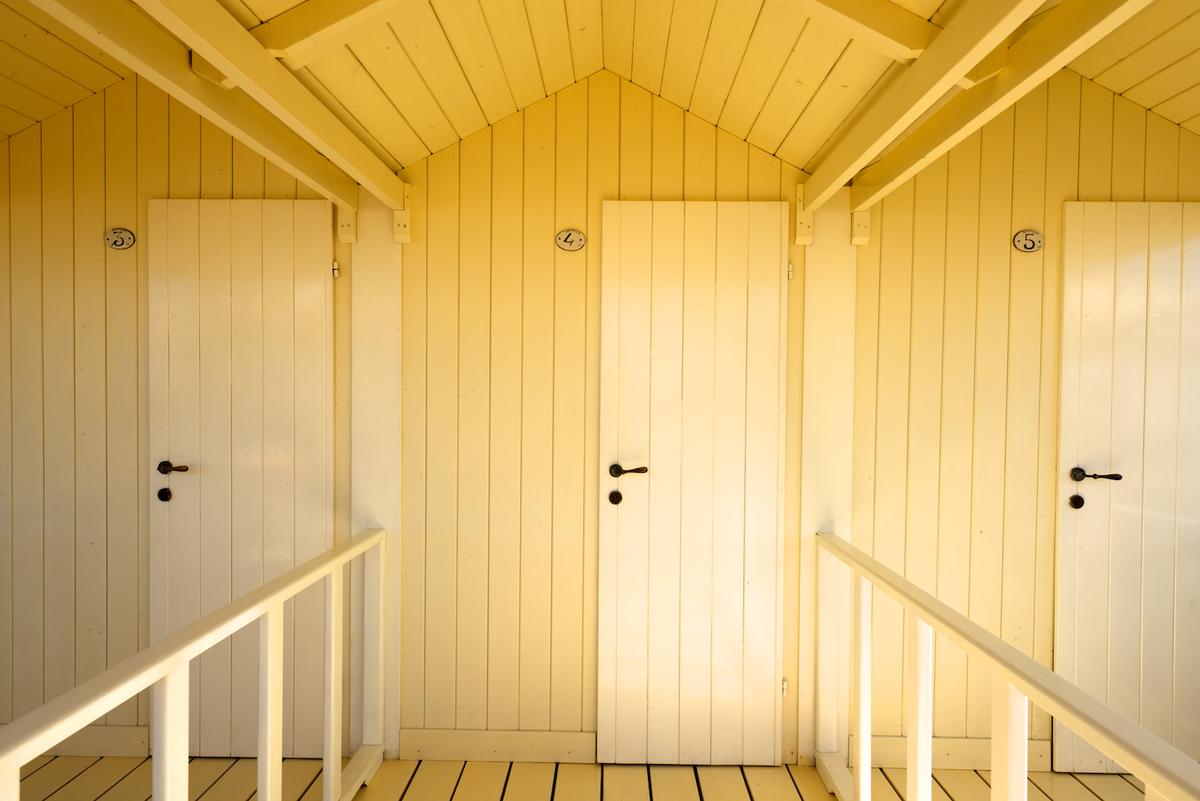 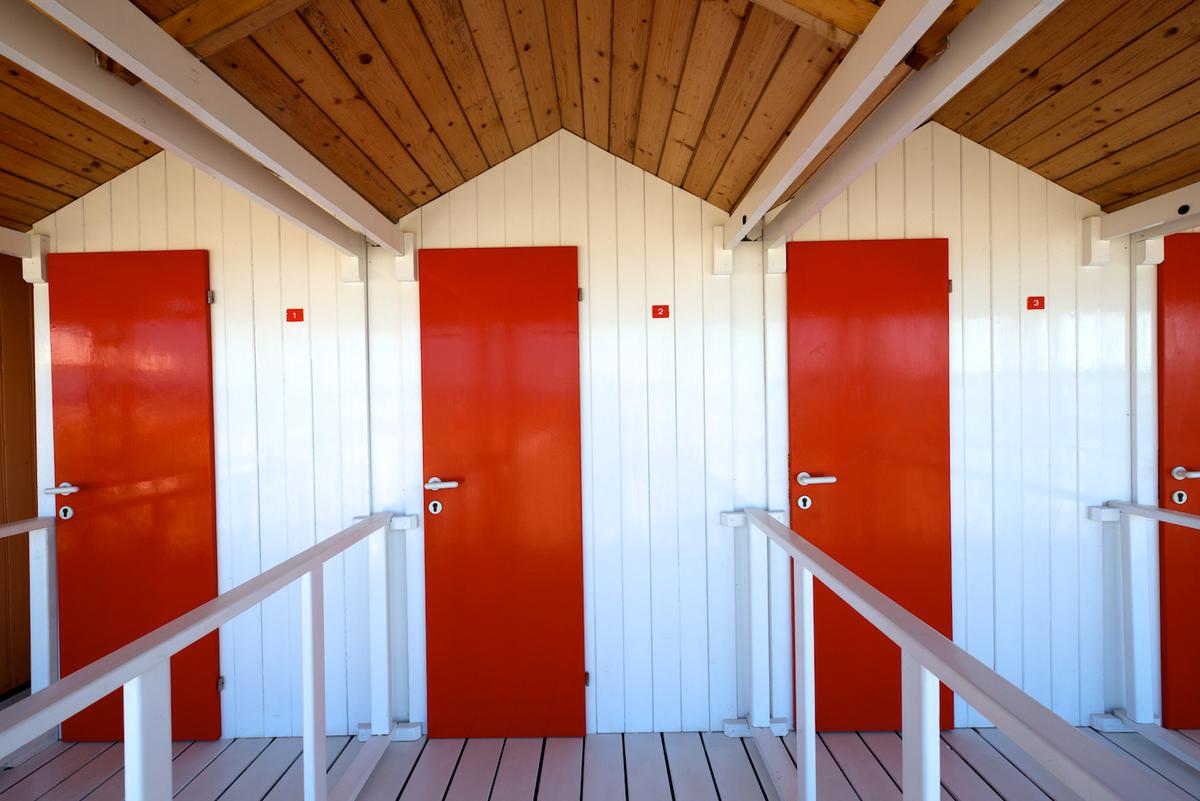 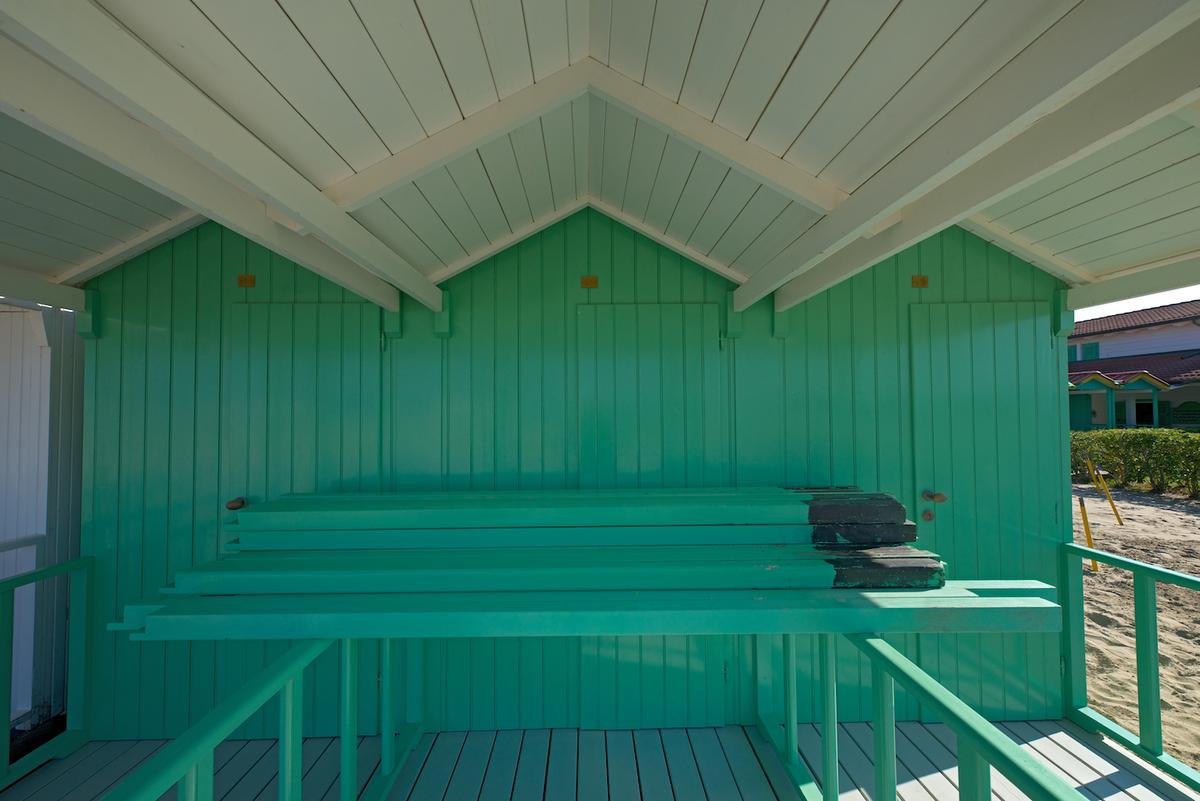 Then the series ends, abruptly, as the statement's been been made, the analogies are in place, the "comparisons and contrasts" are finished and the pictures need to stop.

For me, Forti Dei Marmi was good, very very good, short but sweet.  It took me almost two years to get to it, but with it being 8 degrees outside as I write this on December 31st in Cambridge, MA it feels great to put my mind back to a perfect, and warm, day in Italy.

Hope you enjoy it.

Rivalta is near Trieste in northern Italy and was a small settlement that included a 15th century church, some farm buildings and a couple of houses. It is in an area that is heavily farmed and flat, with crops of corn, some wheat and stands of trees that are harvested for wood every 25 years or so.

This is another in a now-long list of series shot over a few hours on a flat gray day .

The prints in the portfolio are 22 x 17 inches.

The Luna Park series are pictures made in September, 2012 when I was in Itay. We were staying at a friend's house in Valdottavo, north of Lucca and a friend and I took a morning off and strolled around this amusement park. There were a few workers there but it was early and the park wasn't open yet.