This blog continues a description and analysis of a series of photographs I made in 1980 on the island of Nantucket in Massachusetts. If you are  just starting, I recommend you begin with Nantucket Part 1.

Here we go: There is something to the feeling you get when you know you are about to do really important work, but haven't done it yet. That's where we left off in the first part.

I knew I was about to make pictures that would be important to me in my career. We're talking of career forming pictures, seminal work that will be poked at and prodded by analysis later, forty years on, as the very foundation of my life's creative output. OMG! I know, once again, hyperbole rears its ugly head and runs amok, but seriously, this was big.

Onwards. We are now headed into the second phase of the series after looking at the first three pictures in Part 1. Very often in my work, there are subsets or, perhaps "chapters", that add up to a full series. We are starting now with the fourth picture in the group and it does just that, starts a new area of interest.

This picture diverges from the first three. 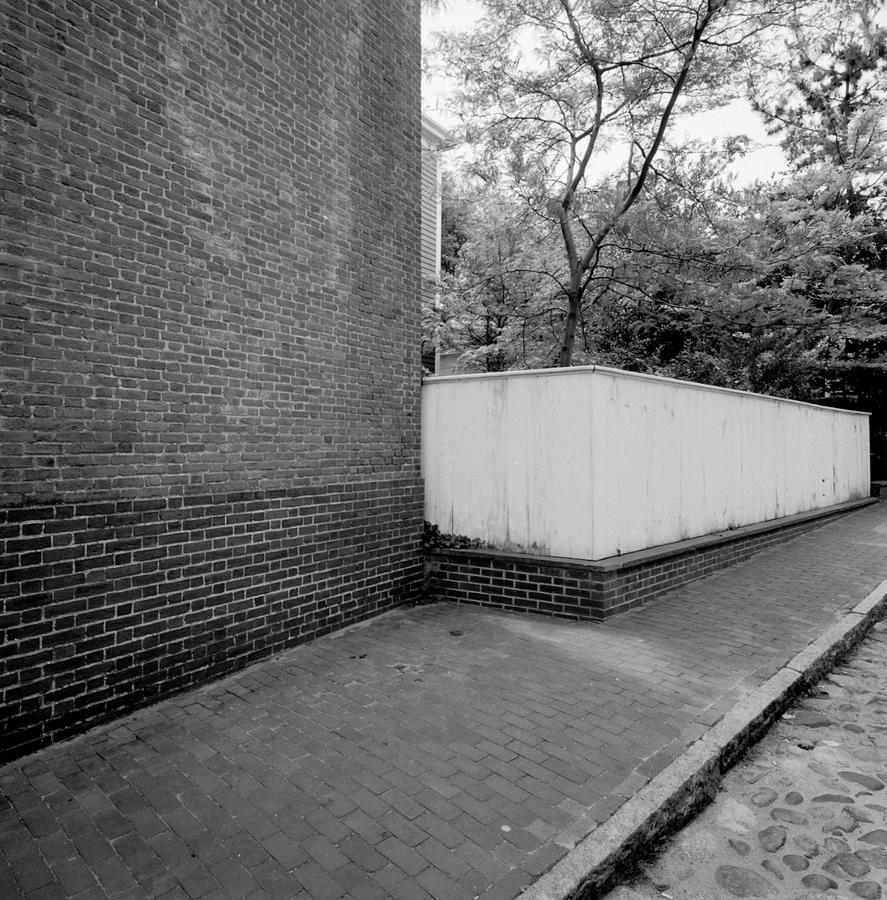 It's angle is very different, as it is taken as an oblique. It is also "straight" in that clearly the camera was held almost level in this one. By the way, the Hasselblad Superwide, being a fixed lens camera, had a 38 mm Biogon lens. This was very wide for the format and the camera was provided with a bubble level and a prism to see it with while you were looking through the viewfinder. Primitive by modern day standards but effective in allowing one to hand hold it and still get straight lines straight. I remember I sweated bullets on this print, wanting it dark but full in rendering the information on the negative. Behind the brick wall, the sun is trying to break through and spreads its light on the sidewalk. This was key to me. I used a chemical called potassium ferricyanide, which acts as a bleach, to lighten this one area. This was the same chemical W. Eugene Smith used famously in his Minimata series in 1972, published by Life Magazine: 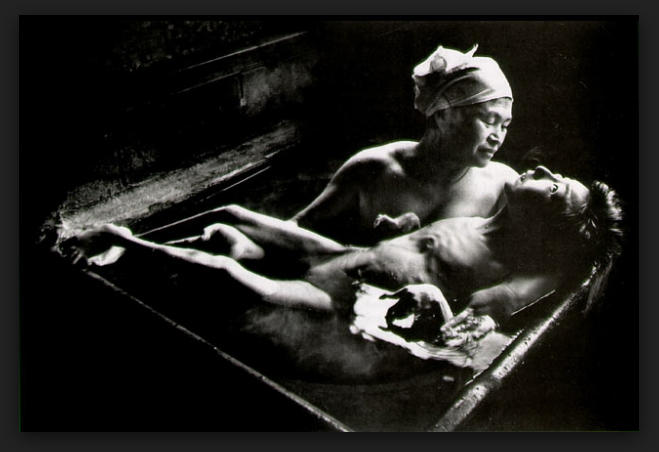 (Please, I am not making a direct comparison from my work to this picture of a mother bathing her child who has been ravaged by chemical pollution on the island off of Japan called Minimata. This is one of the greatest photographs of all time. I am just using it as a way to show the effects of chemical bleaching.)

The next one was the darkest in the series: 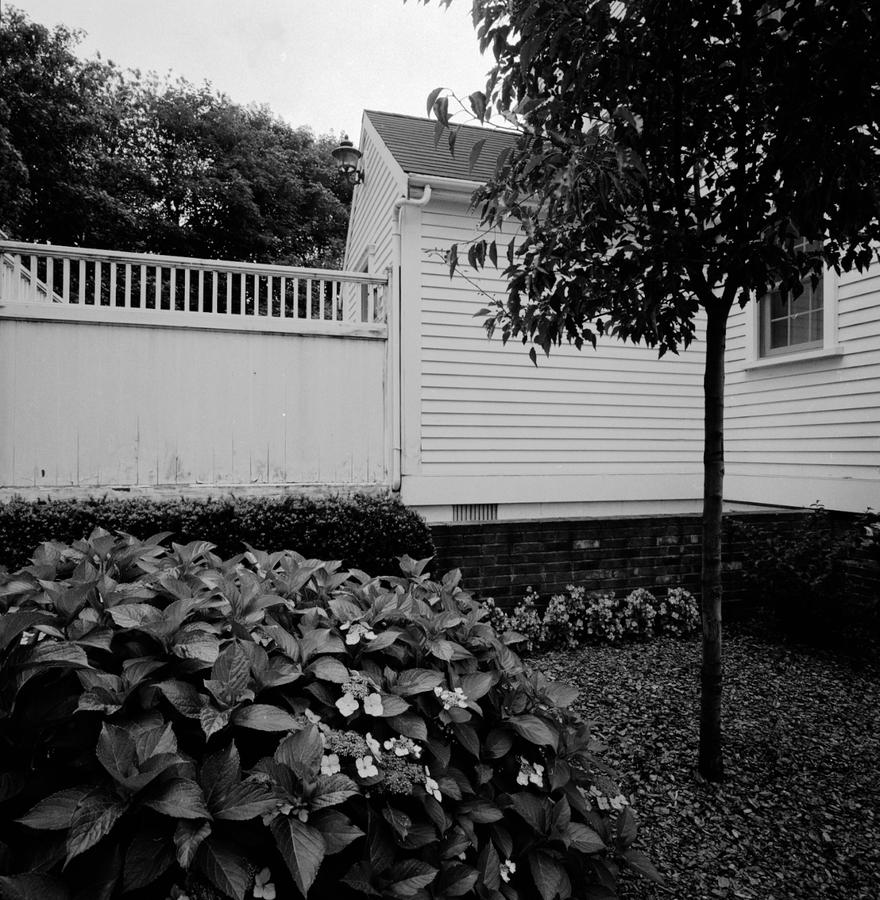 and puts whatever content is in the picture in front of a large backdrop, as if this bush and tree were on a stage. We are right there, inside the picture, which is part of my point, to push the camera into the picture. Also, what happens at the point of intersection of the two clapboard walls on the right? Does the tree trunk do something there to the space? And finally, we have a large wall that serves as a backdrop to the foreground. But it also serves as a barrier to seeing anything beyond it. I focused the lens on the plant/bush on the lower left and the detail in there is like a whole world. I remember being pleased with the decision.

The third photograph in this subset, actually 6th in the series, 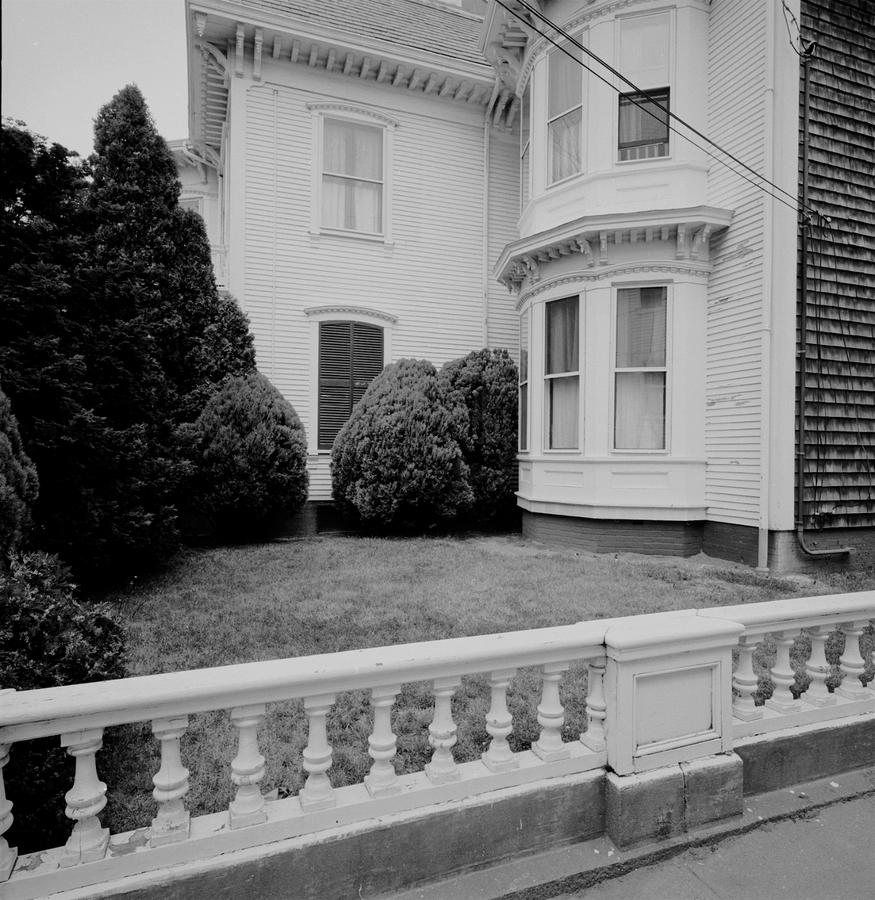 allows a little space to get out and is less closed in but draws us into a kind of conversation with the space. Look at what is going on with the top of the house towards the left side of the frame. The square format combined with the acute width of the lens allows us to be standing in front of something but also to see practically straight up too. This is in itself a lesson in perspective, convergence, divergence and is also pretty twisted if you really look at it. I was very interested in this characteristic, this "photographic seeing", at the time. By photographing something so mundane and ordinary and using the camera progressively, I could draw attention to this dichotomy. It is totally unique to be inside this space but seeing up as well as down without moving our head. This is photographic vision and one of the reasons I love photography. You too, probably, as you are reading this.

In Nantucket 3 we will continue to seriously freak with reality as we work with the weird and wonderful world of the SWC camera with a lens designed by Carl Zeiss himself, who then brought it to the young Hasselblad company in Sweden in the mid 50's and said "here I've made this lens, care to match it with a camera?" Hence the camera I had nestled in my right hand as I walked around these bizarre back streets.