( I  wrote much of this profile on Scott when I was still  at Baer in Iceland. I am finishing it now and have been home a little over a week.)

Scott Johnson is the fourth and last Baer resident I will profile while here in Iceland. There are only two months a year when artists are in residence here, June and July.

And there are only five studios so only five residents, meaning ten a year. It is a good number as it means we are a small enough group to become close, share our work and collaborate if we wish. It also means we are easier to transport and feed as we’ve been taken on weekly day trips to surrounding areas by Steinunn, our host, and our meals are provided by a chef, two a day. Tough gig, eh? If you’re thinking of applying, you should, and if you’re not you should spread the word about this most wonderful of residencies to others that would apply. But know this: next year is an “off” year, where Steinunn and her family take a break from inviting the residents into their home for meals and taking care of their needs, and from providing the most glorious of environments for artists to work.

Scott Johnson lives in Colorado with his wife and young son and teaches at Colorado College in Colorado Springs. He was just tenured last year and in that system he is eligible for and it is pactically assumed that a new associate professor will take his/her first sabbatical leave after tenure and Scott did just that. He deserved it as tenuring is an exhausting, exhaustive and rigorous process of scrutiny by your colleagues and peers. At a school of as high a caliber as CC, he’s been put through an academic ringer of the first order. Sabbaticals are times to recharge and to get back to the reasons we started to make art in the first place. Pairing his leave from teaching with this residency was brilliant. Scott and I have talked about finding his expressive core here, after some real soul searching and long nights (where it never gets dark!), he has. Scott wears a few hats as an artist: installation seems to be at the forefront, with a strong leaning towards sculpture,video and photography pulling close seconds. He really prefers to just be called an artist.

We all have made slide presentations to each other while here and Scott’s was the last, just a few nights ago. In it, Scott is revealed to be a man working across disciplines to find an expressive foundation in creating two and three dimensional pieces that are an eloquent demonstration of how he thinks. I have learned that his installation art relies upon a trust in the process of letting a piece unfold and evolve as he is making it. How cool is that? And how loaded too. Yes, there have been disasters, but out of the smoking ruins has been born new projects and new ways of seeing things.

At any rate, let me show you some of his work. Keep in mind we are seeing installation art rendered by photography, which, as we well know, can only mimic the real, not depict it: 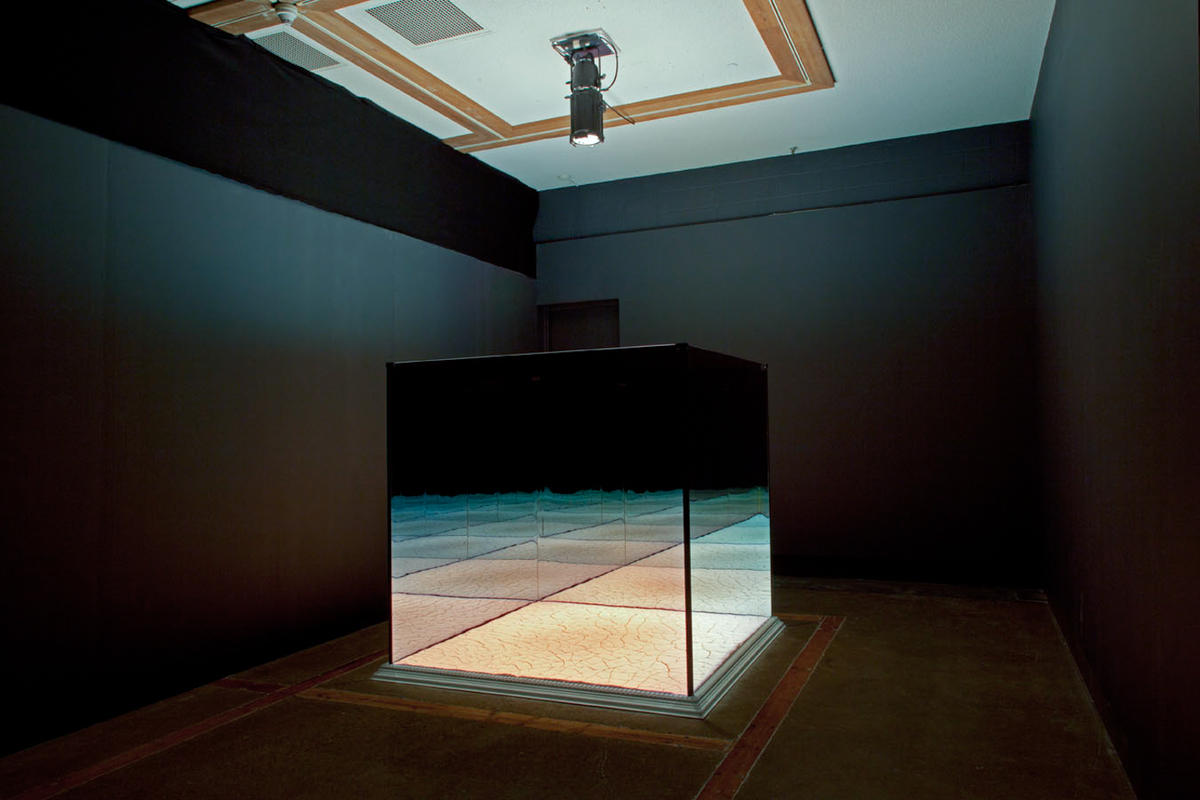 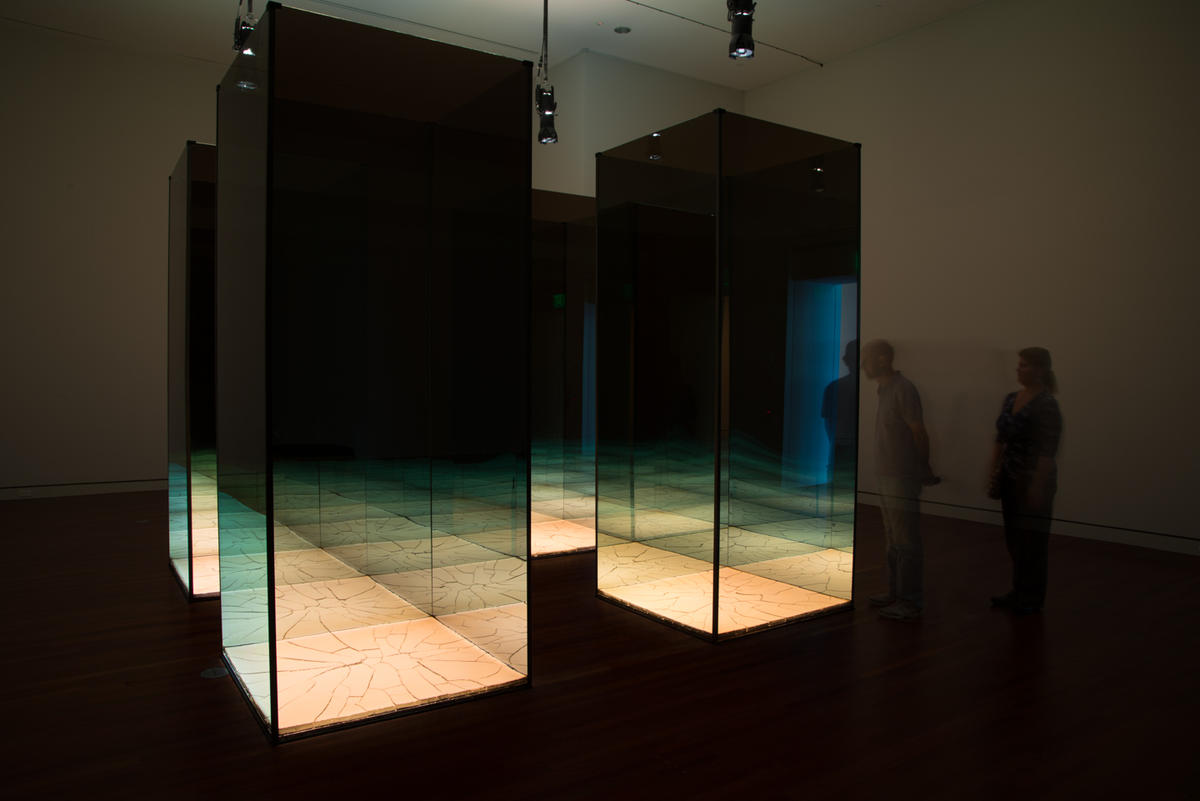 These large pieces, commisioned by the two museums, are glass and mylar with a thin layer on the bottom that is dried out dessert dirt.

Scott brings an intellectual's rigor and discipline of research to an intuitive process and depends on a multiple of perceptions to arrive at a finished piece. He also counts on things changing and being sensitive to different stimuli as he works, plans, builds and finishes his installation pieces, be they in a museum, in a public space and so on.

You might assume that all this thinking would result in a person who is hyper sensitive to his/her surroundings, someone who is keyed up and"charged" all the time. Scott's not like that at all, but clearly he works at tuning into places and phenomena that have the potential for becoming something later or can be used to feed into something down the road. To that end he photographs a great deal but not so much to use the photographs he makes as an end product but as a way to grab at three dimensional representation two dimensionally and through 4D in time lapse sequences that show changes in light and temperature. 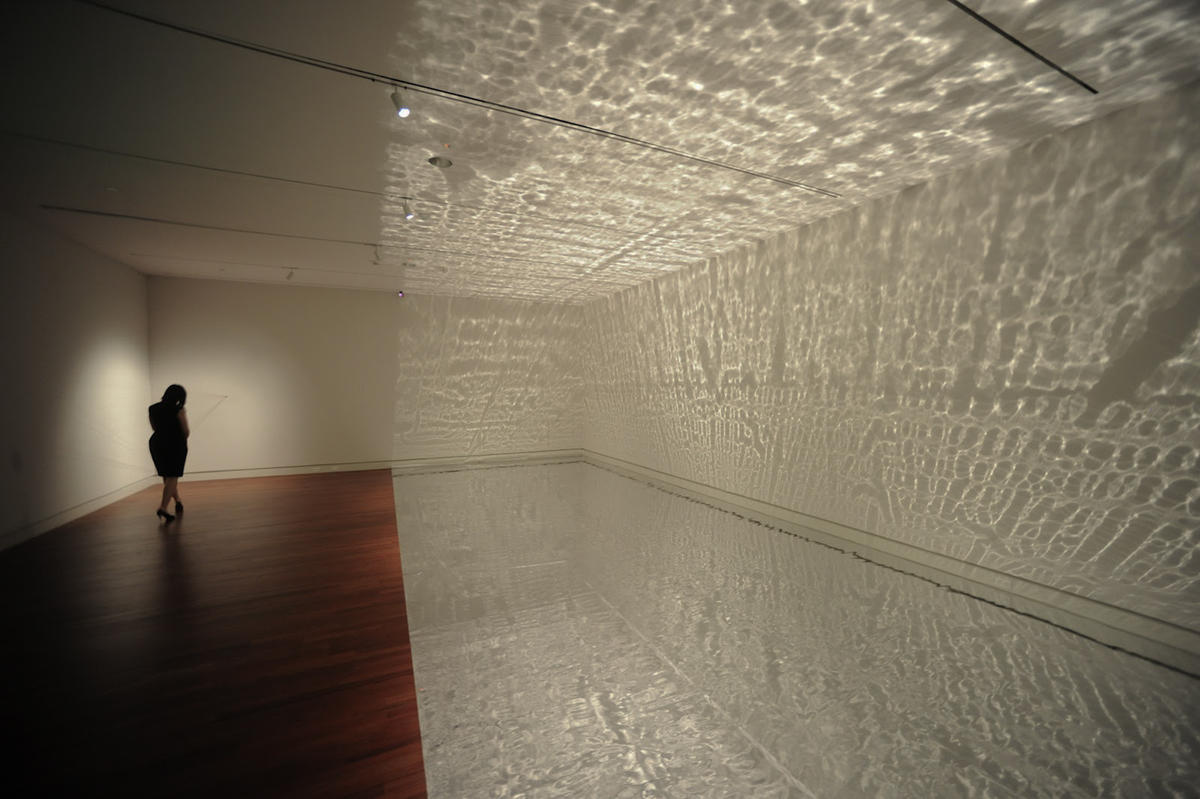 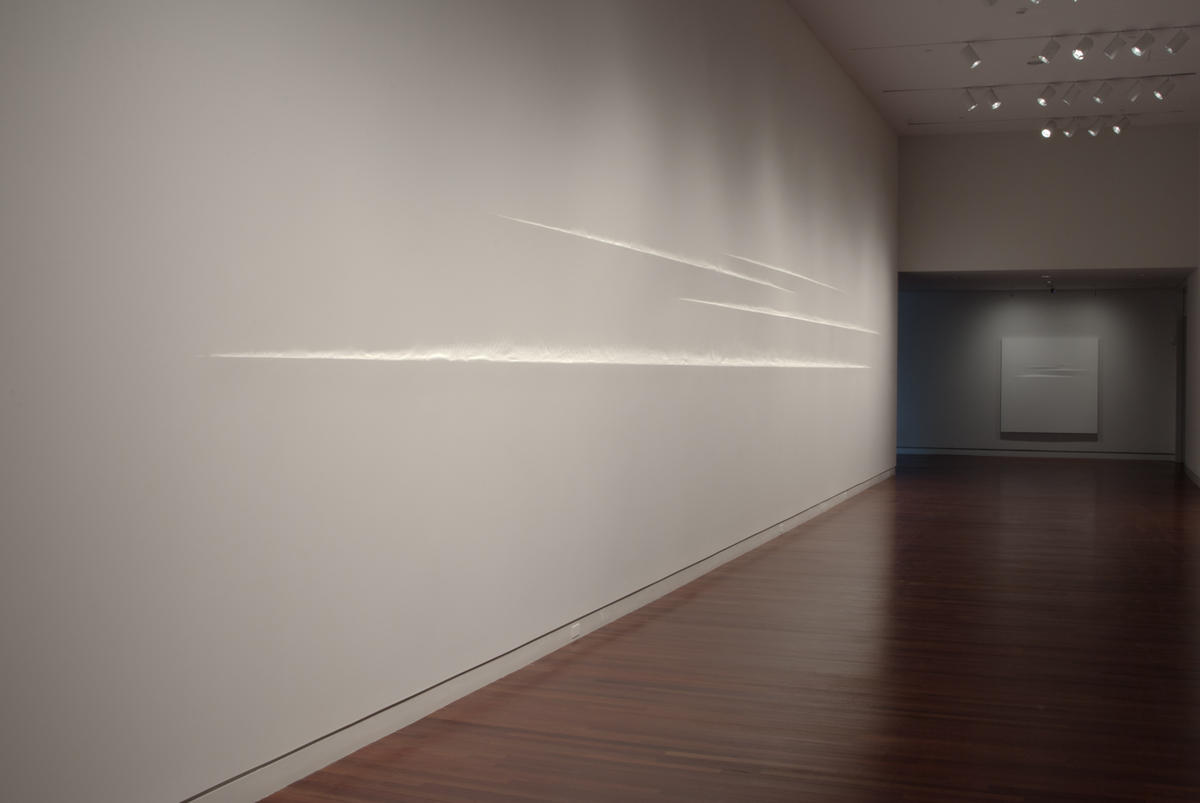 I don't want to belittle Scott's past accomplishments as they are large and significant. But I have a unique opportunity to show you something new that he has just finished. So please go to his website where his past pieces are fully documented: Scott's Website

As I am now writing this after the residencies ended I can show you what Scott made when we were in Iceland. For the first couple of weeks we were there, I would wake up in the middle of the night and look out at the daylight at, say 3 am, to find Scott was outside, photographing something, drawing something, hammering on something. I would get up at 5 to begin my day when Scott was usually just going to bed. It seemed he'd laid claim to a certain place right outside the studios: a concrete slab at the end of an old foundation that looked due north. 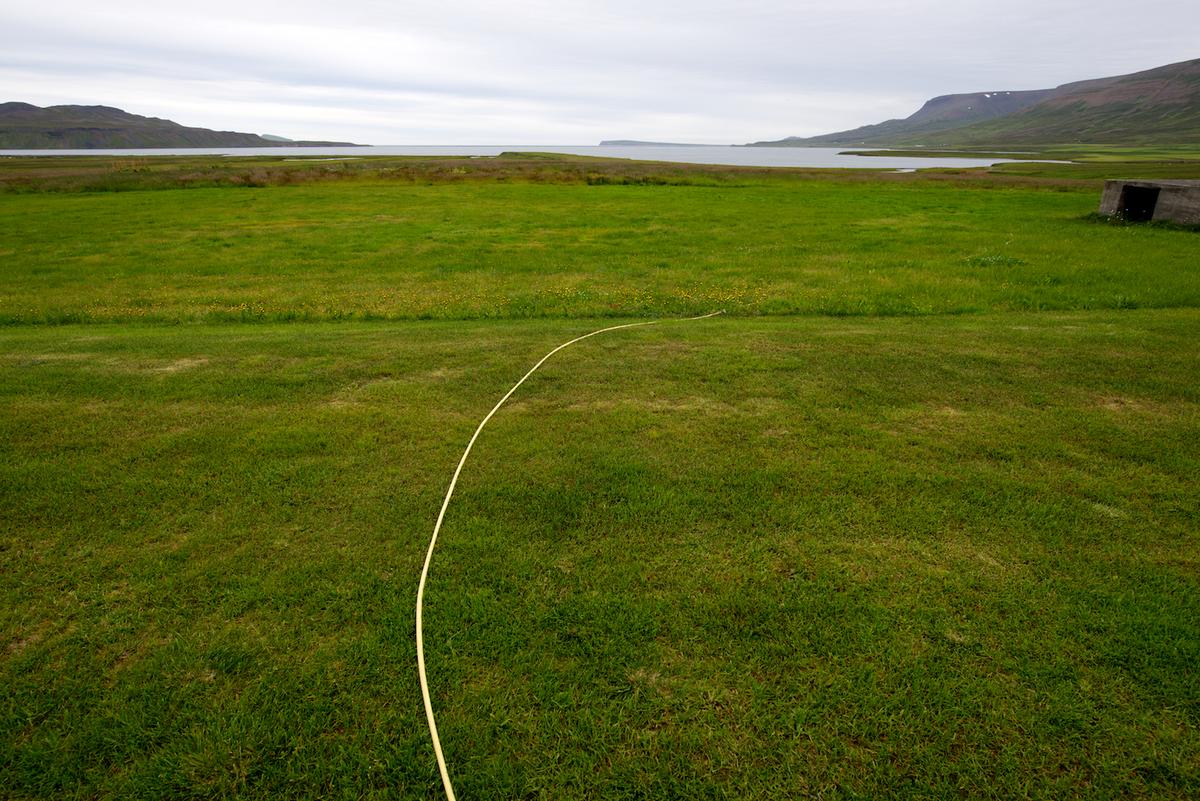 and here it is as a crop from another frame shot from the window of my studio: 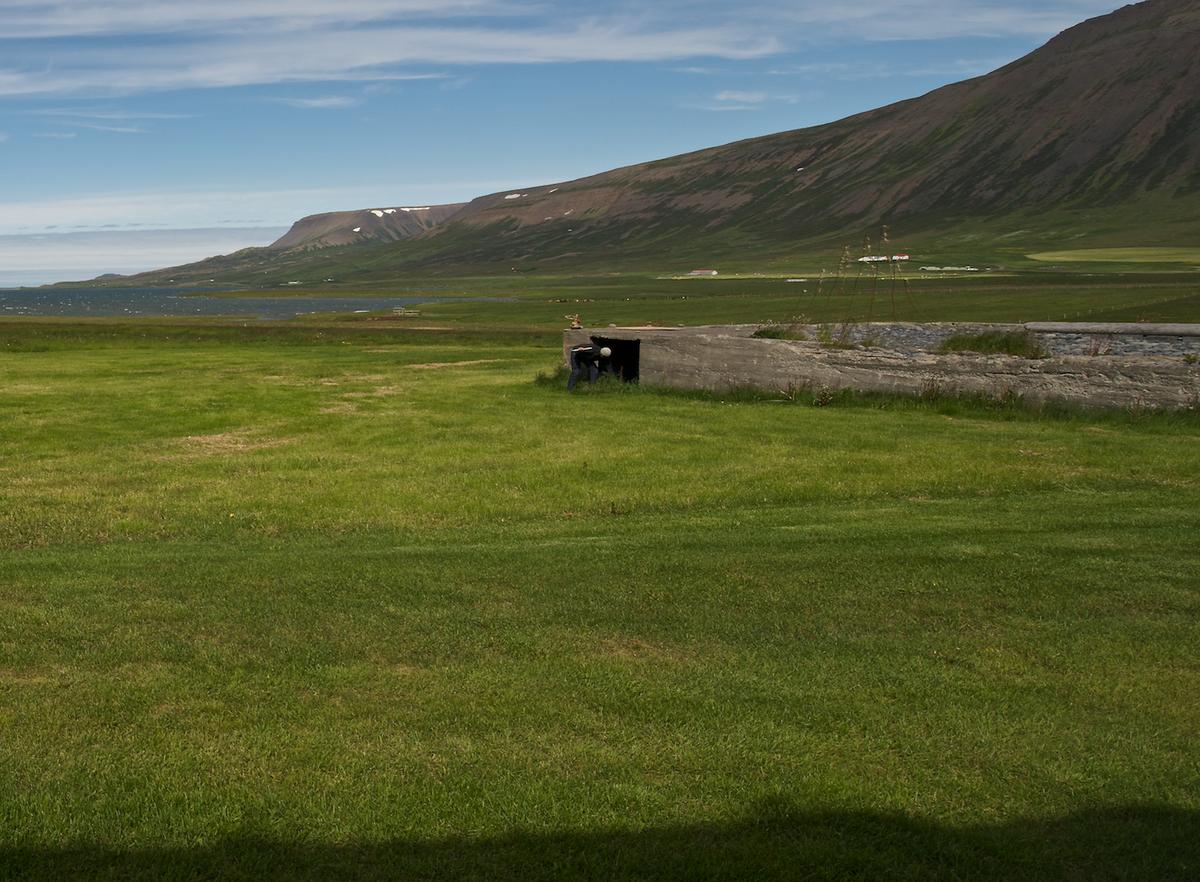 Looking back, this was not an easy time for him. He wasn't able to settle down to just one thing. This was the period where the idea hadn't jelled yet. There needed to be experiments, false starts, failed ideas. What did he finally arrive at? What did he make? What came of a grinder with a diamond blade and some intense days of measuring, grinding, wearing one grinder out, getting another? 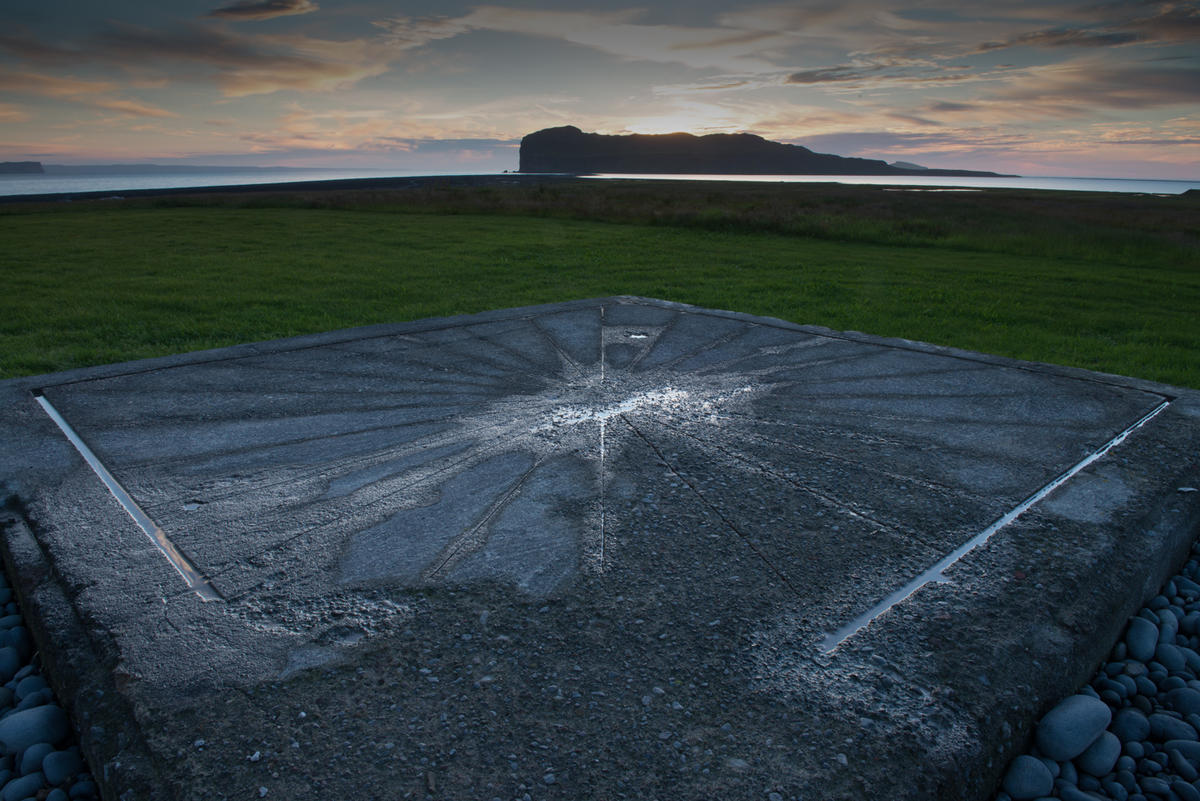 This one above showing his cuts facing north west and with water in them that reflects the light. And here facing due north:

He made a sort of sun clock and compass, an elegant reminder of how time and position could be told in the past. The shadows fill and empty each slot as the sun moves through its path. Every other installation artist that had been a resident at Baer had made pieces that were positive projections into the landscape. Scott made something that lived in a negative space, was a form created as an absence of, in this case, concrete. Beautiful.

He says that what he hopes is that lichen and moss will form in the grooves he's cut. I look forward to seeing future documentation of this, life growing from something cut into stone in the summer 2013.

What a simply elegant piece, a demonstration of functional beauty and form following function in an installation that should serve well over time and will presumably be enhanced by natural forces.

Scott was brought up in ski country in Colorado, west of Denver. He trained as an Olympic skier as a young man. I don't know that I've ever met anyone like that: someone who comes from an upbringing as a competitive athlete to be an artist. But what his background brings to his practice is a life-long relationship with the outdoors and how we relate to landscape and nature. He cares about the history of visual representation of natural forms. Finally, and this is a quote," I am mainly concerned with the way affective experiences in artworks can lead to a mixture of wonder and  critical thinking." Love that, this way he has of analytically looking at our immediate and often everyday surroundings.

Scott at the site: 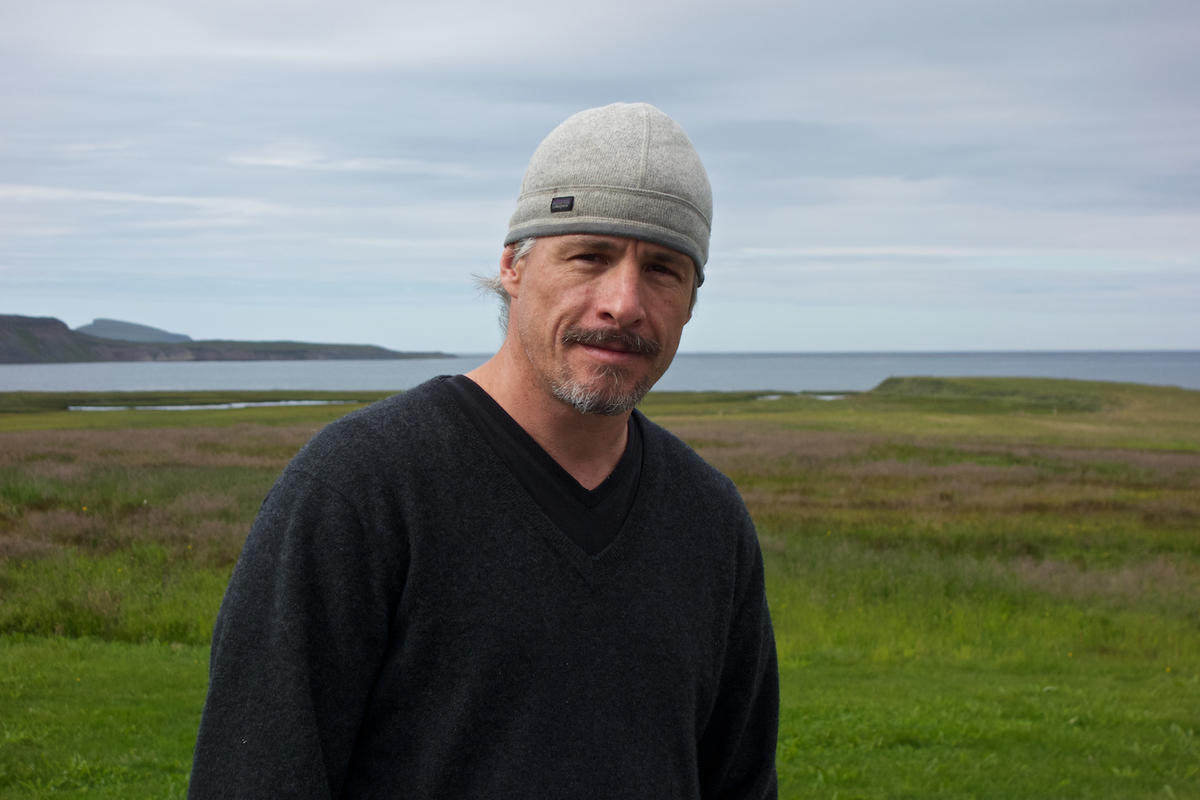 This is the last of the artist profiles from the time in Iceland at the Baer Art Center. As I am now reengaged in my life at home, and Iceland fades away a little I need to write that being given a residency and the honor of working studio by studio with other artists is about as confirming an experience this artist can have.

Thank you to Olof, Mahala, Sarah and Scott for taking the time to be interviewed by me. It was, in turn, a pleasure to be a resident with you.

Next up? An announcement of a two night studio viewing event with Panopticon Gallery in September.Stay tuned.