Ólöf Einarsdóttir is a textile artist and the third resident artist working this July at the Baer Art Center in Iceland that I am profiling. Ólöf is from Iceland and lives in Reykjavik.

I spoke with her in her studio at Baer a few days ago, which is right next to mine. I learned that Ólöf studied textiles, tapestry and fabric at the Icelandic College of Arts and Crafts from 1980-1985. By the time she was a second year student she had decided to major in tapestry but had also was very interested in graphic design. I asked her if she knew then that she would be an artist rather than a crafts person and she said yes, emphatically. She knew right away that she wanted to work with fabrics expressively, abstractly and artistically. 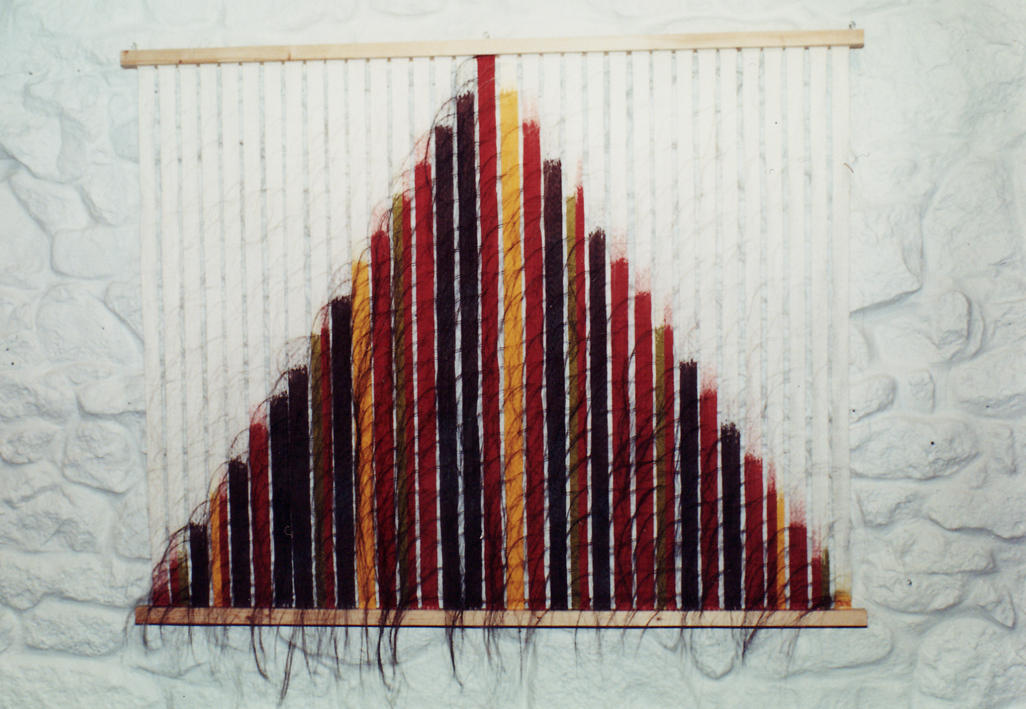 Most of Ólöf's work references Iceland and its traditions, culture and history.

By 1988 a few years out of school she began working with horsehair as a way to make her pieces which involved intertwining horse hairs to make flat and later three dimensional pieces. She also used sisal, a natural fiber used to make twine, which she would separate out into individual stands and then reform into her pieces.

This is a highly labor intensive process, requiring patience and a steady hand. Her constructions are vey often very spare in look and yet, on a closer view,  they reveal many layers and are very intricate.

Quite early after school she began to use several forms as a kind of foundation to her work, the most prominent being the triangle: 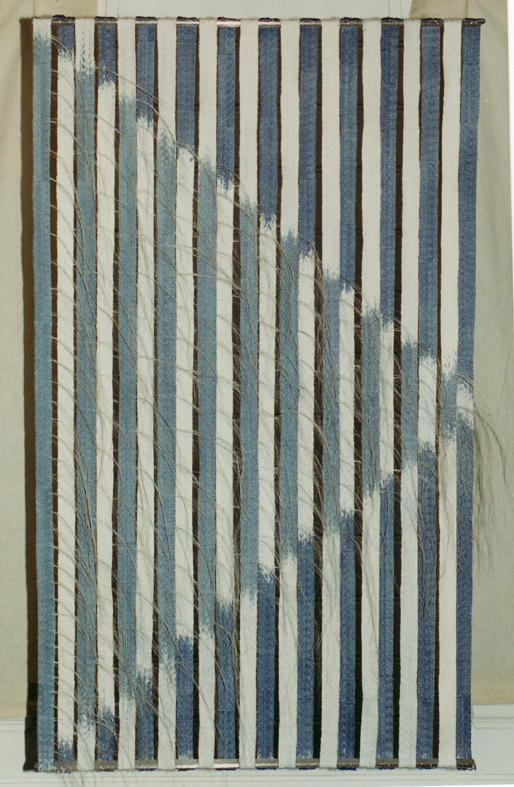 The pieces are large, perhaps 3 to 4 feet in their longest dimension. Although hung on a wall, they are not, strictly speaking, flat but have some depth.

Most of her work pays homage to Icelandic culture and traditions and is a reflection of the unique character of Iceland, its spare and minimal landscape, but also its turbulent volcanoes and huge glaciers. It is a primal place and her work speaks to that with restraint but also with a quiet power as well.

By this time she had begun showing her works, most often in textile shows in Iceland or in small group shows where she represented the fabric arts along with painters and sculptors. 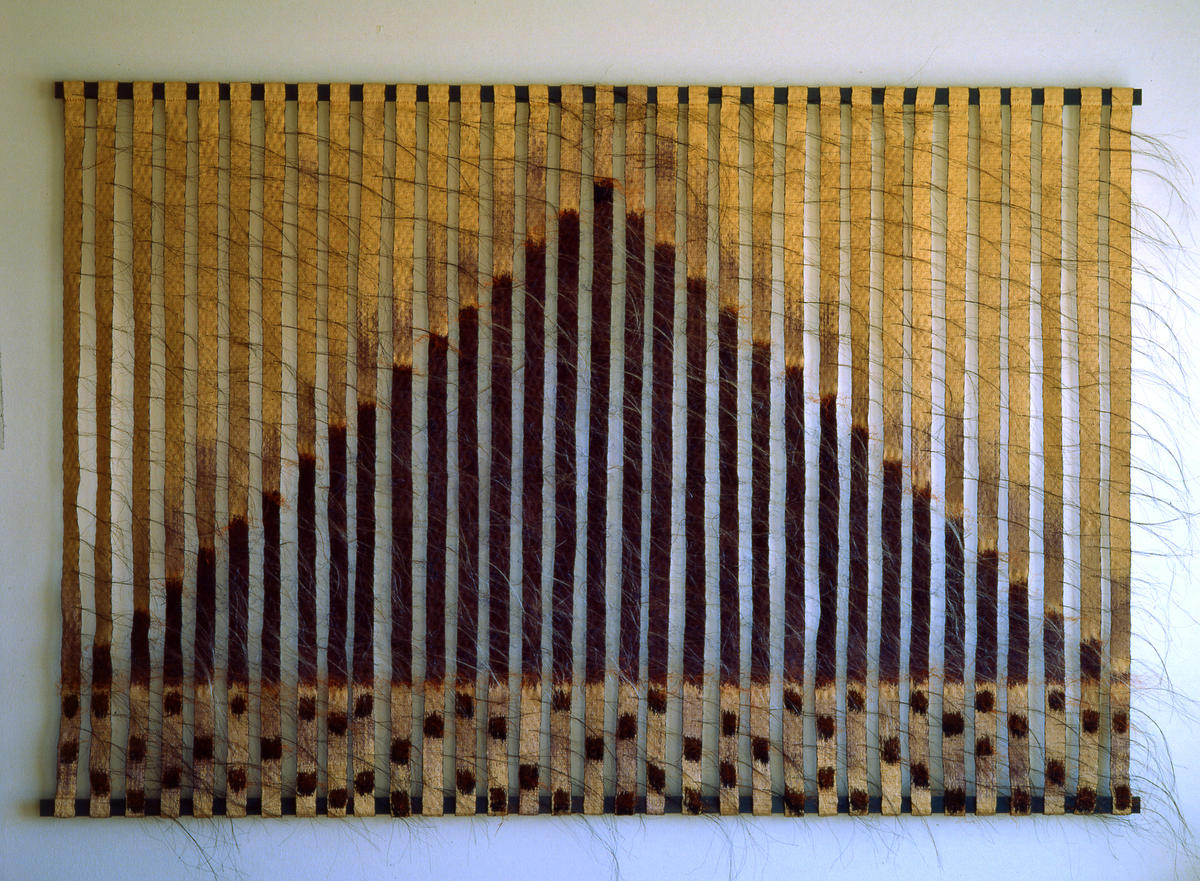 During this time she combined materials, including horsehair, and made braided bands using an ancient Icelandic technique.

In 1988 Ólöf began making three dimensional pieces that hung from a support above and were displayed so that you could walk around them: 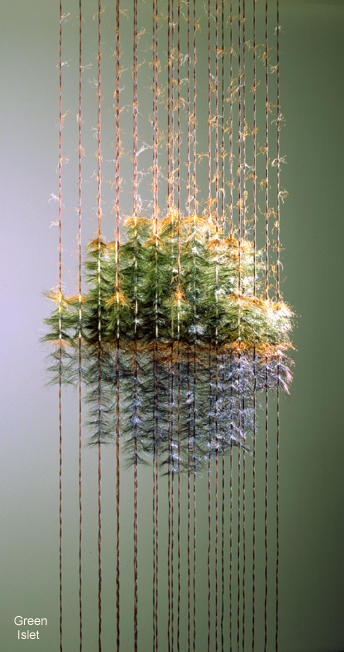 These seem to me like a logical extension of the wall pieces and are enriched by having real form as opposed to being primarily a flat surface. These pieces also have a wonderful quality of the top half sitting on a reflective surface as in water with the bottom half sitting below the surface.

Her intent here was to allow for different views and to engage the viewer in the piece more interactively.  As a logical evolution of her this work, she started working   collaboratively in 2002 with her sister Sigrún Ólöf  Einarsdóttir, a prominent glass artist in Iceland (http://www.gleribergvik.is). Planning their pieces together they made a series of combined flat floor-based structures, wall hangings and free standing forms that were glass that utilized horsehair as well: 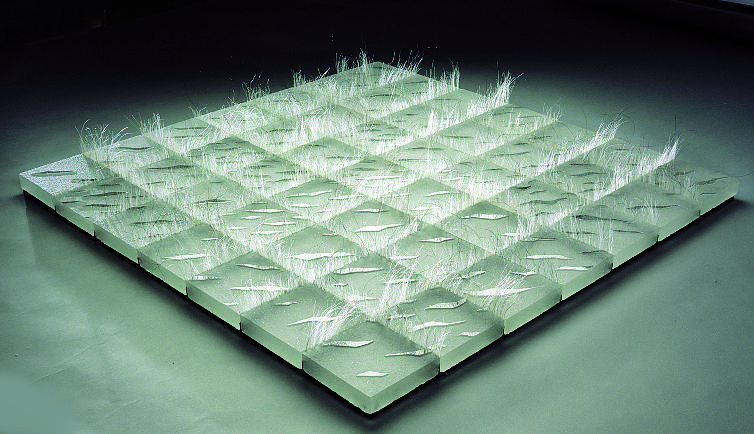 This piece aboce is about 4 feet square.

As they continued,  the pieces became less flat, initially geometric 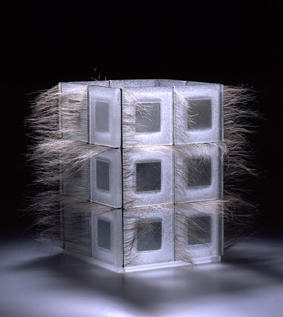 and then, with some new techniques learned abroad, more organic: 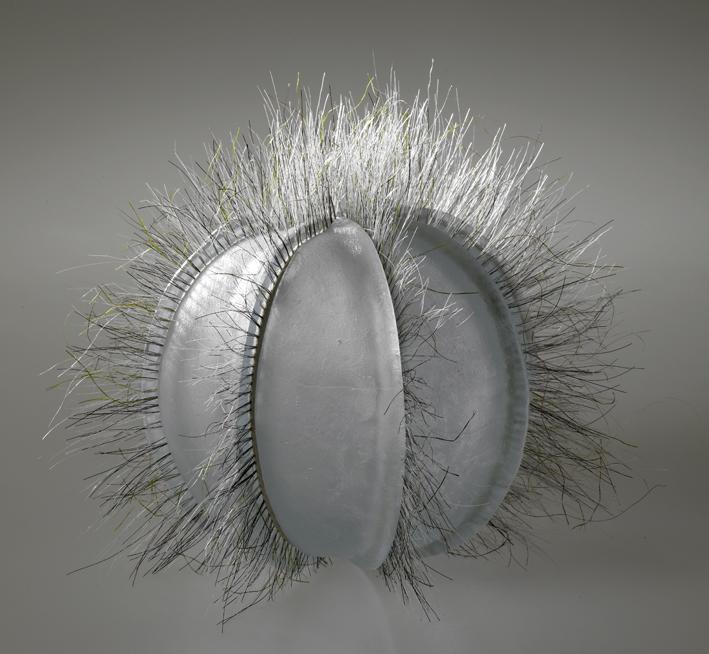 The collaboration continues to this day. In early 2002  the two sisters worked to create a large body of work for an exhibition in Denmark called "Glass Threads"with Sigrún's husband Soren Larsen, who died in 2003. Ólöf continues to work on her own as well and currently has several works on display in France. 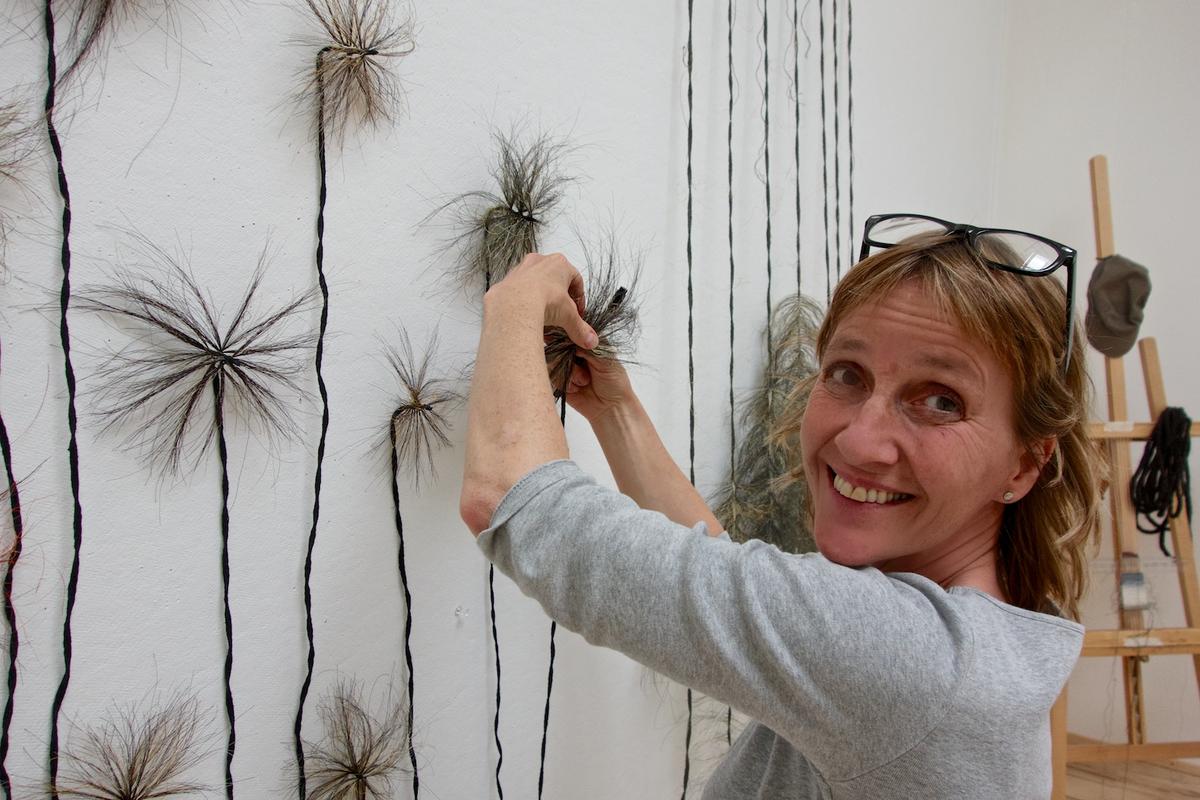 Ólöf  at work in her studio this week.

It has been a real pleasure to work side by side this past month with such an accomplished, disciplined and prolific fabric artist. I have learned a great deal about her practice and Ólöf has shared her love and passion for her country with all of us at Baer as well.