This is a walk through of a series of photographs made in 1997 in rural Pennsylvania.

Part one is here: Hershey PA

We are now going to take a look at the fifth photograph in the series: 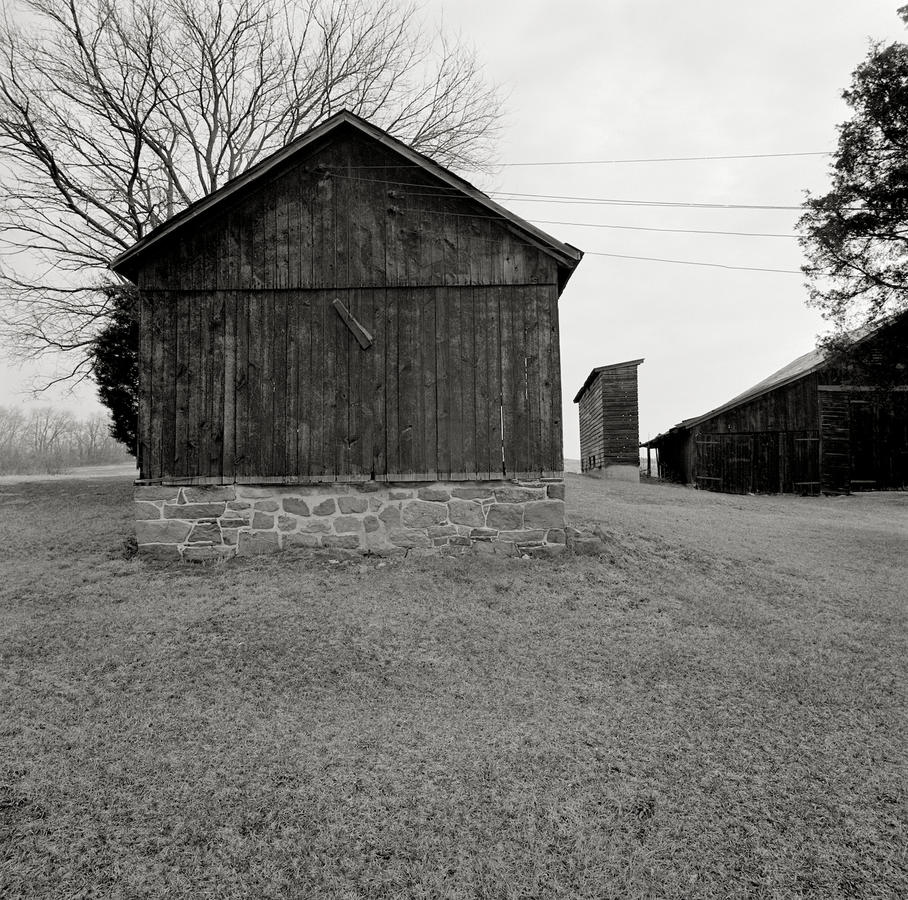 Definitely something different, although there is enough here for us to make the connection that we're in the same place, particularly in what is shown on the left, the tree which was alluded to earlier and the trees in the far background. This picture strikes me as something of a jigsaw puzzle, the pieces fitting together somehow: the barn in the front presenting a face to us, the small narrow one (which will get its due soon) with the opposing roof and the larger one looking cut off at about 1/2 of its whole form. These are objects that create negative spaces. All rendered in blacks, from the dark gray on the left to the inky back on the right. This reflects the way that I processed the film. We could vary the images' contrast by how we underdeveloped or overdeveloped our black and white film. Longer in the developer to increase contrast and shorter in time to decrease it.With this very flat light the plan would be to underexpose and overdevelop to stretch the tonal scale closer to ten zones, which would result in increased contrast. While I wanted the pictures to be flat to reflect the grayness of the day, I also wanted black blacks, such as you see here. That's how this was done. 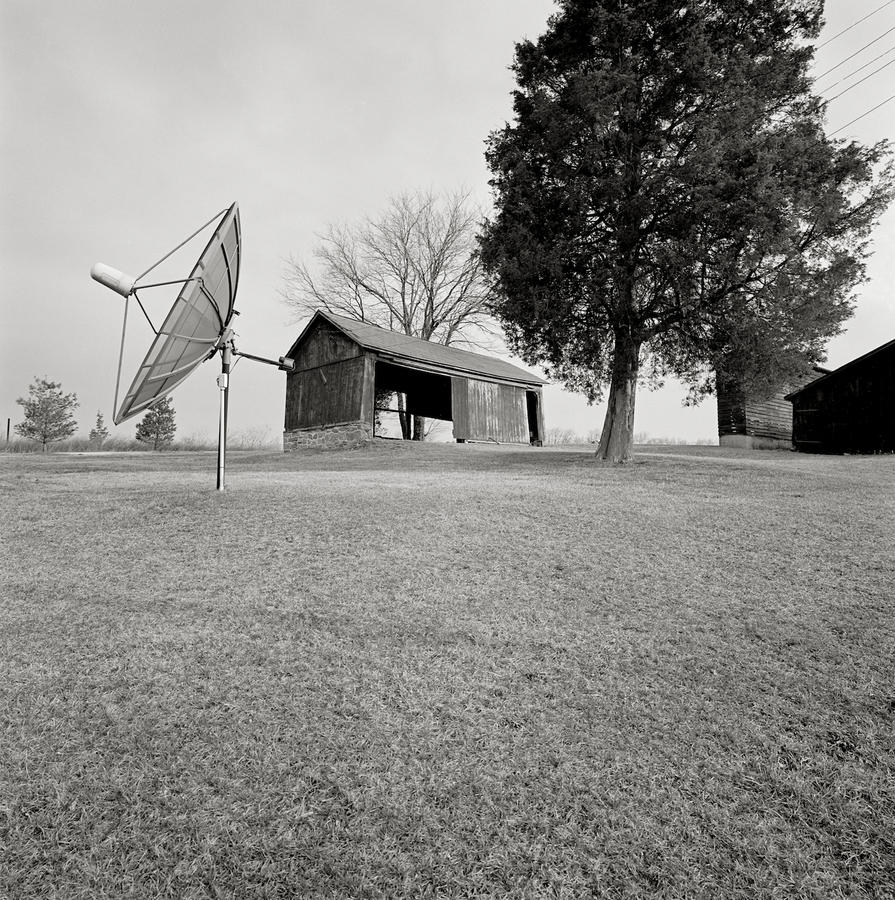 Oops. This one throwing things strongly off kilter, in my mind, maybe questioning  some of our past assumptions. This big current technological shape, the satellite dish, slapping us into the then (1997) present, partially to ID the time in which the picture was made but also to throw a hugely different form at us, something round. Then the dish connected to the barn which in the previous frame looked completely solid, only to find it is a shell (of its former self? Don't really know). But now we also know where we are again, as the left side of the picture tells us by showing us the end of the row of the trees we started with in frame number 3. As an aside is this deliberate, to keep referencing the pictures to the left side? I don't know if I am that smart but I do know it was a tactic to help place the pictures in relationship to each other as photographs in a highly sequenced series. We also have the two structures on the right, separated by a large and very black tree, either seemingly supported by black wires or being pulled to the right by them, the wire much like the cables in the earlier frame of the cross, the tall thin shed partially obscured. Next up we'll see that shed. 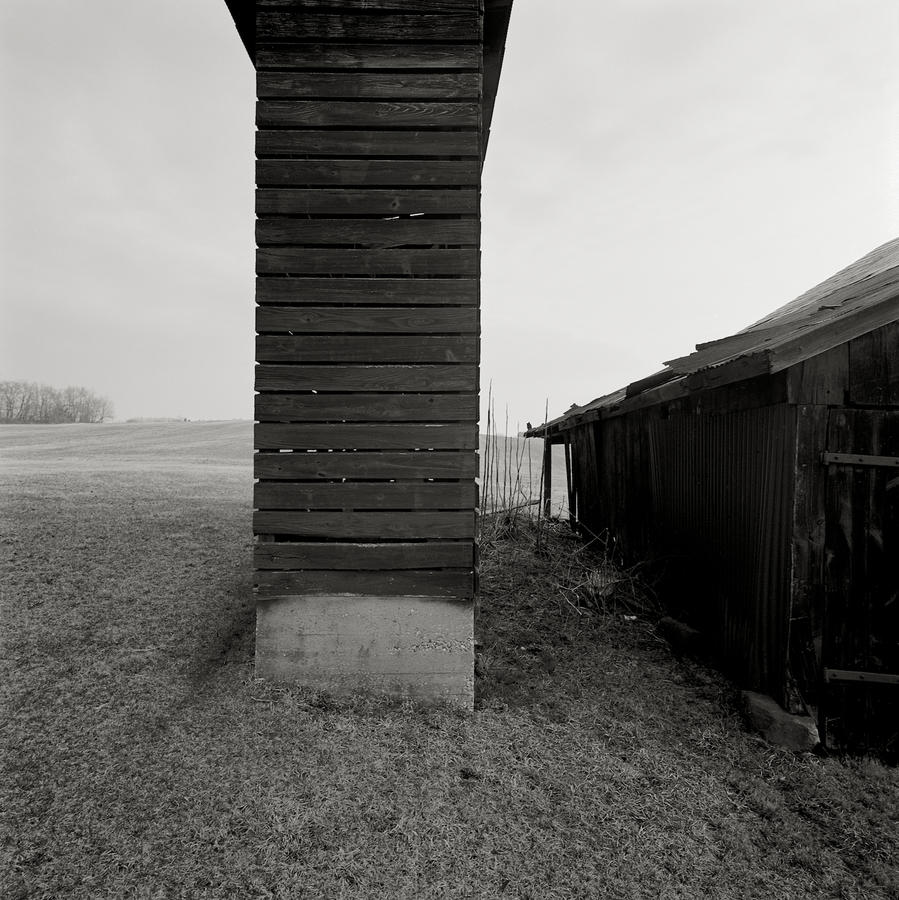 Another slap in the face. Frontal and truncated, and oh so very black. Ominous  really, but also, if we could just get past these two, look at the lovely open country we have behind them. This is the first time we've been offered a way out of this little prison we've been in. What is that in front? I am only guessing but I think it is a tobacco drying shed. Where the tobacco leaves hang to dry after being cut down. Maybe you know for sure. Finally, I had learned long before that Lee Friedlander split the frame often by placing a telephone pole or a stop sign in his pictures to make pictures within his pictures. I was using that here... and in the next one too. 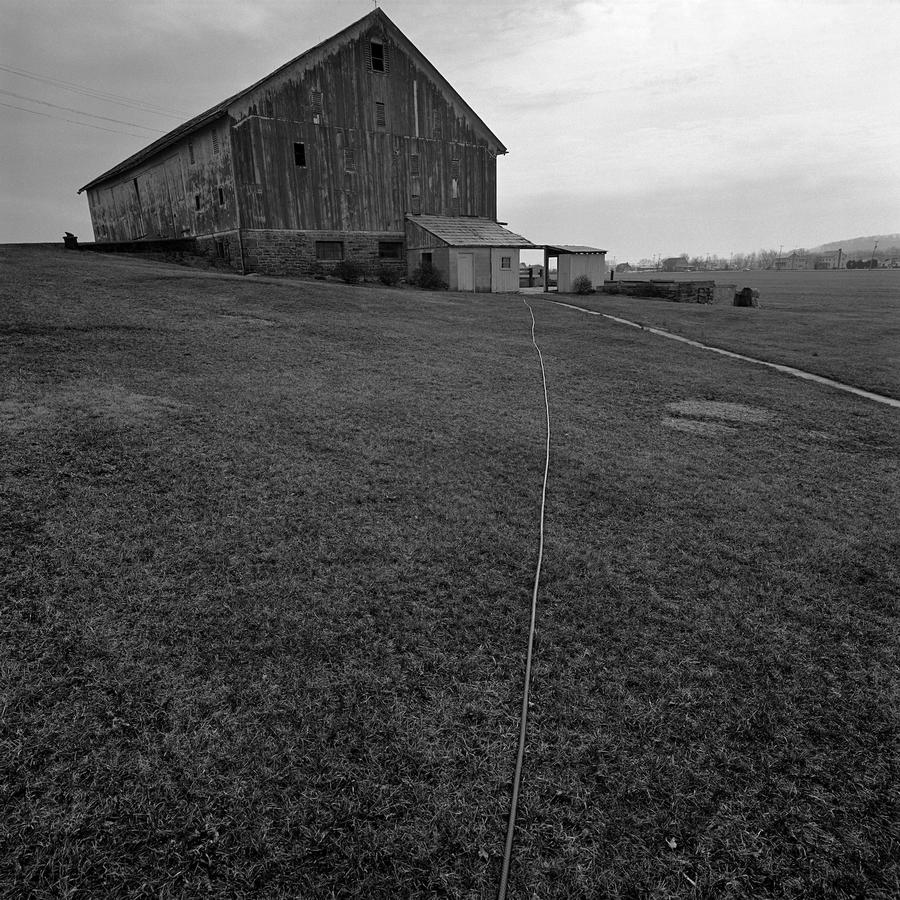 Wow! We have now spun again. The series has to keep moving as I edited it very tight to increase its impact and to keep it essential. This barn will predominate in the next three frames. You may recognize the hose, as it was in the second picture in the set. Yes, that's where it was headed. I like hoses and ropes (again, I refer to Benson Gristmill series), but here it is a device to sweep us to the upper half, the barn, and to cut the ground up into thirds, with the cement walk to the right providing the other slice in the pie. Work with a wide angle lens and point it down and things above the middle will bow out, as in the barn here. It's why really wide angle lenses are not for sissies or the ignorant. This wasn't a very dignified thing to do to the barn but we are about to be getting a little lighter as relief from some of the intensity of the earlier frames. Notice also that the barn is dark in this frame but not as inky black as the previous ones.

I remember this was an extremely tough time in my family. Does this series reflect that? Maybe. Things do look pretty grim in the first 2/3 of the series but, starting with this frame, there is improvement coming. If I was pressed to answer why I made these pictures, I believe I'd say to reflect on the conditions there at this place. Pay particular attention to the left side of the frame (again with the left side!). If you had to guess what that was sitting up there, what do you think it might be?

I don't know if I have you eating out of the palm of my hand yet, but if you're following along and have now read these two posts, and haven't peeked yet in the gallery section of the site to see what is next, we will get to the next frame at the start of the next post. And finish the series called Hershey PA.

Before I close. I often think, when writing these analyses of my work in series, of you, the reader. Are you enjoying these and the structure of writing about a few at a time? Do you agree with what I write? Or are you bored or aggravated by them? Have I got you hanging on the edge of  your seat, waiting for the next post to see what is gong to happen or couldn't you care less?  I do wonder.