Grids, multiples, tiles, mosaics: I am sure there are many other terms for putting pictures next to pictures on one page as well. I started to make enlarged contact sheets in the early nineties as I had an 8 x 10 inch enlarger so could put a whole roll of 35mm negatives (36 pictures) in the enlarger at the same time. I made the ones I am showing here around 2004 when I was newer to inkjet printing and I was fascinated with the possibilities inherent in placing bunches of my pictures in rows all on one large print.

I made these in two ways. One, by assembling things I'd already shot into a pattern and the second, by shooting intentionally for the grid I would subsequently make. 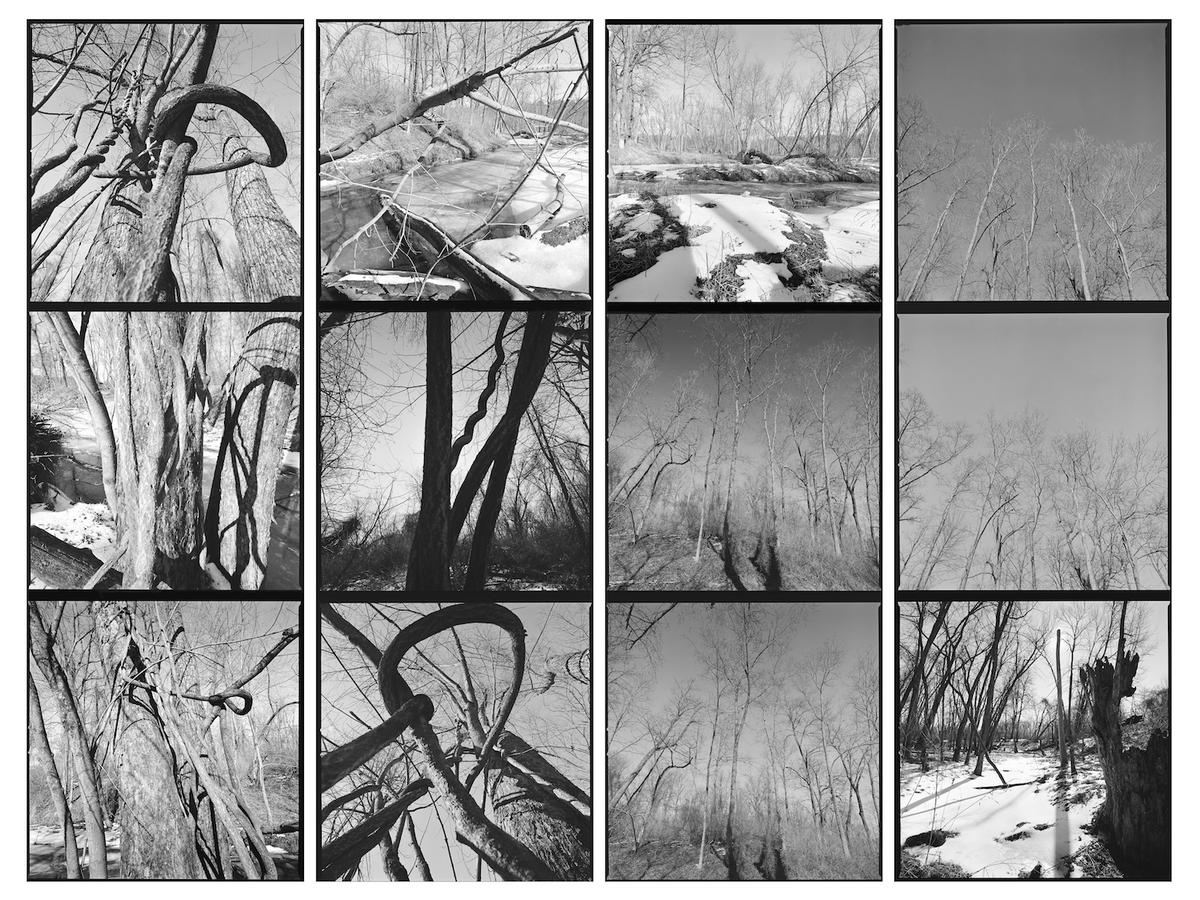 At times they were simply enlarged contact sheets, like this one from one roll of 120 mm film. Typically they were quite large, as in 40 by 30 inches or so. 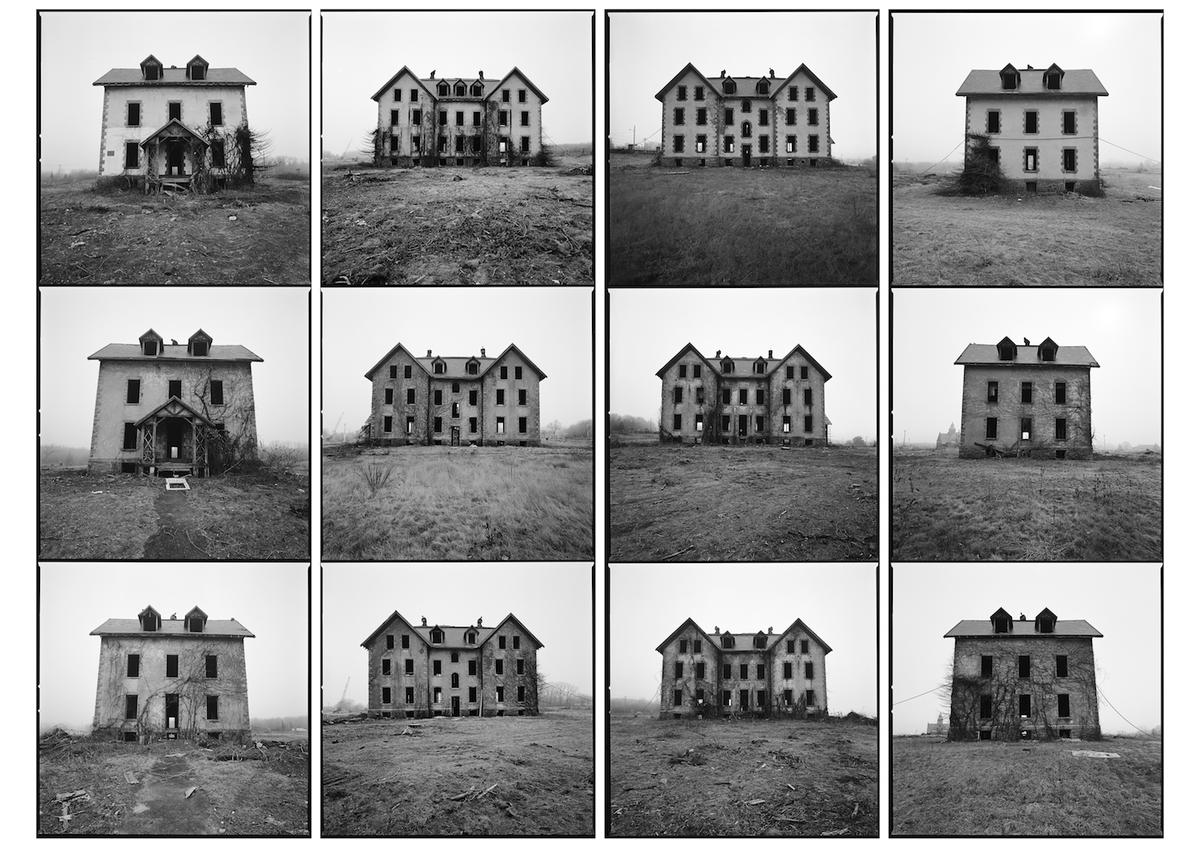 This one needs some explanation: A good friend lived near here and these buildings had been part of a school for wayward boys in Cranston, RI called Sockanosset School for Boys (School) in the early 1900's. The site had been abandoned for years. My friend had noticed that crews were clearing all the brush around these three buildings and suggested I take a look. As it turned out, there was a mall going in but the three buildings were slated for renovation and would be used for offices. I shot them in 120mm making the left frame the front of each building, then photographed them from the left side, then the right and then the back. The subsequent print was about 5 by 4 feet. Now the first building on the upper left has a Joe's Diner restaurant in it. Go figure. 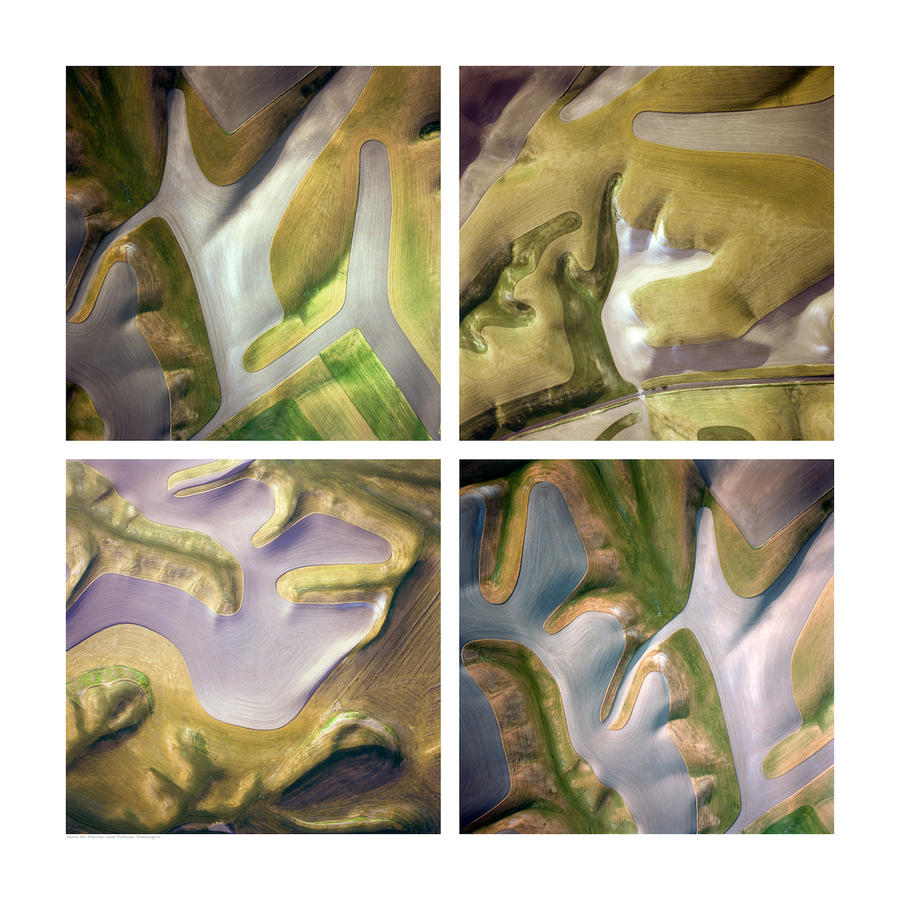 I made a few of these also, aerials from the wheat fields I photograph in Southeastern Washington. 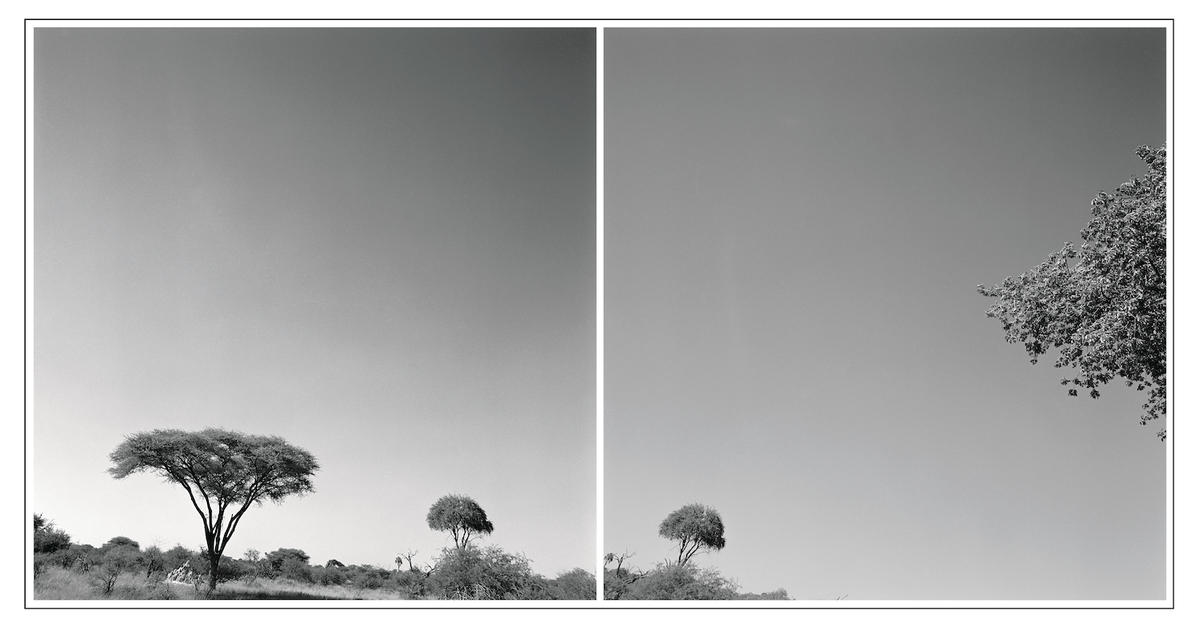 This above was from a trip to Africa with my sister after her husband died of ALS. He had always wanted to go and asked her to take the trip and bring me along after he died. We did. 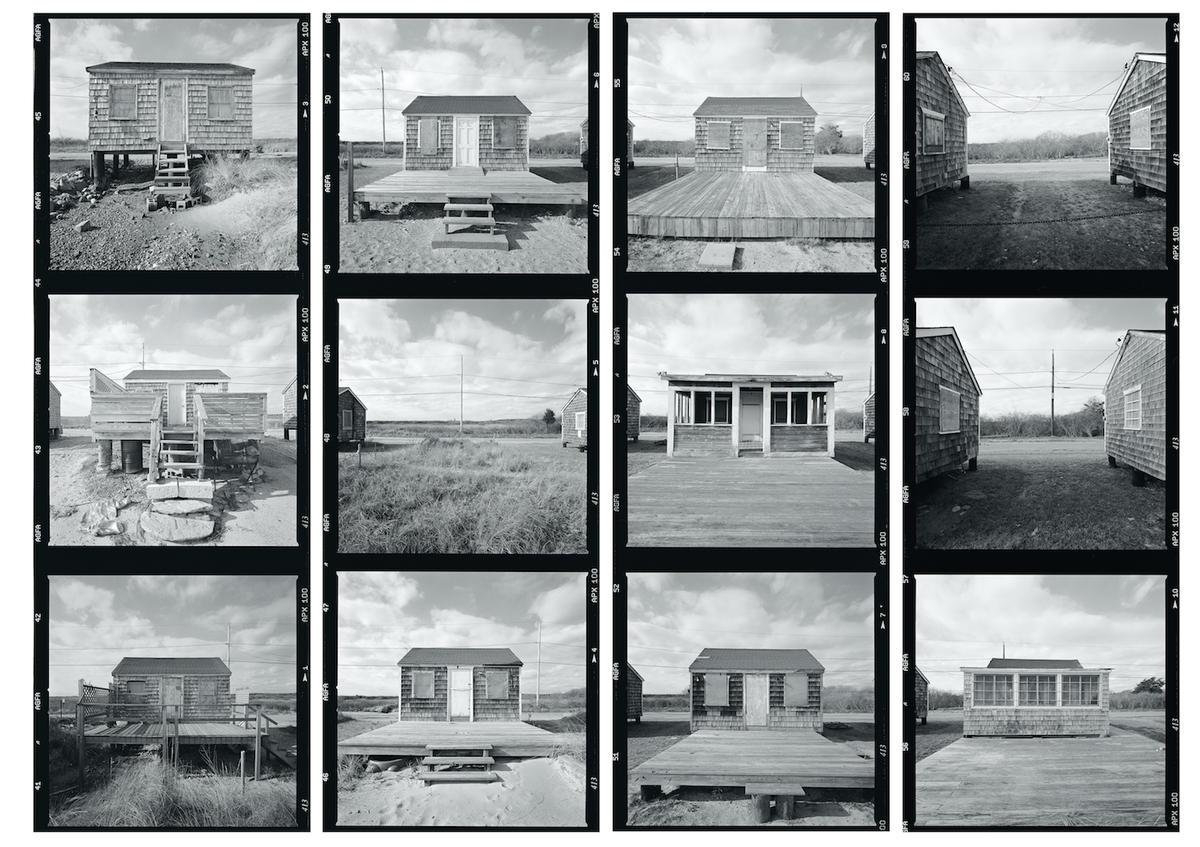 These are from a row of shacks on a beach in RI. For awhile, if there was anything in a row or a group I would photograph it like this, working to make it into a grid. Sometimes it would work out, sometimes it wouldn't. 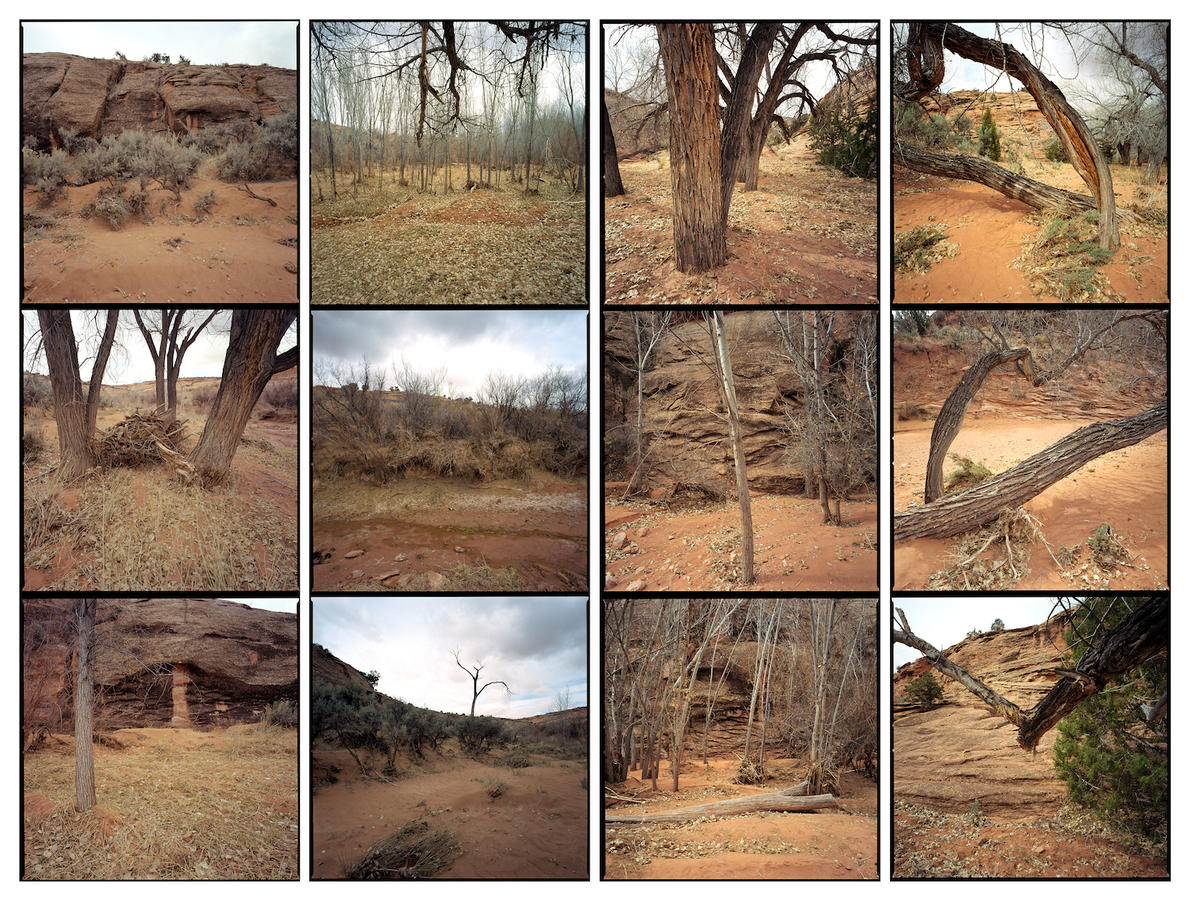 I was wrestling with getting a whole series of pictures up on a print in one step,  consolidating many and allowing different interpretations of the way though them or the path someone could take. I called this one "Red Wash" and it was from Utah.

This was from rural Pennsylvania, a huge new Butler-type warehouse building with no windows, just sitting there, wide open. I shot several rolls of film and the print is about 80 inches wide. 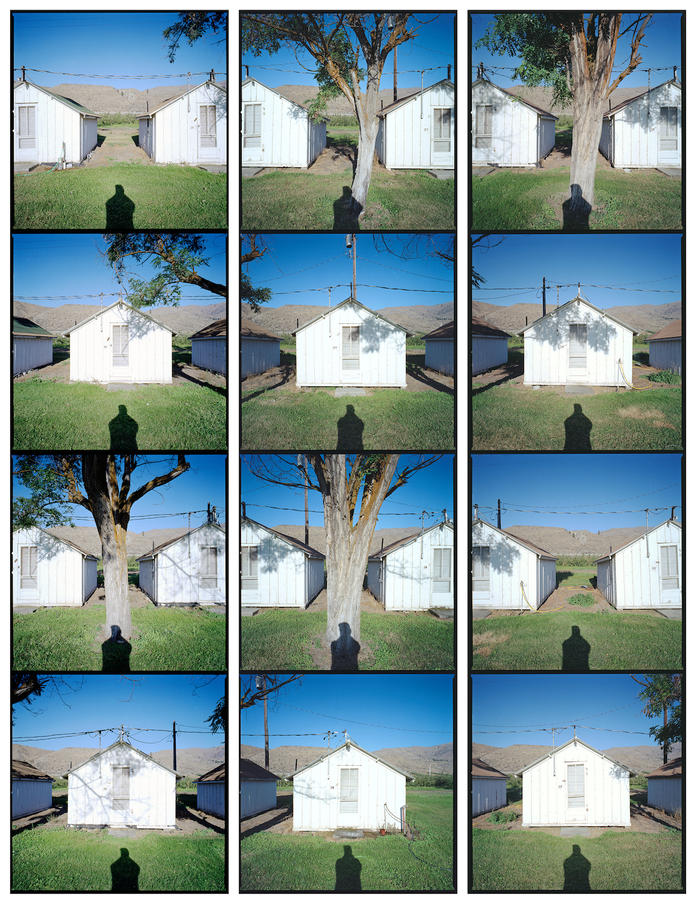 Fact of life: shoot early or late in the day with a wide angle lens on a sunny day with it behind you and what have you got to deal with? Your own shadow. This was my attempt to put it in the picture.

So what's happening with this way of working now? Nothing. As I've been looking at these while working on this post (and searching through past years of work) to find them they addressed a concern of mine at the time to communicate a whole assembled in one place rather than a whole derived from composite parts as traditional series work was for me. To see a full series up at once is a very different thing than seeing individual images as prints in a portfolio or as pages in a book.

The years I was making these were hugely transitional for as me as an artist for this was when digital capture really wasn't good enough but scans could be very good. Inkjet printing was also now mature enough to be able to make really good prints.

My friend and colleague Keith Johnson works in grids a great deal and makes fascinating and beautiful pictures in this way. I have enjoyed watching his pictures evolve and change as he works to interpret and invent in this approach to making photographs.