Back in the day... love that phrase. What the hell does that mean, anyway? At any rate, to be more specific, I was often the "go to guy" for many seeking better control over their exposure and developing in black and white. Yes, this got me into defining the terminology behind the Zone System, as it was known that I taught it, and then helping colleagues and some strangers with their struggle.

Wow! Looking over some of my past 8 x 10 negatives it's a wonder they learned anything from me at all. To my credit, I never did claim to be perfect but that I was embarked on a struggle to be proficient like everyone else was. Maybe it was that I had worked on it longer or harder or with more dedication than they had. I do know there was no easy way, no short cut to be being masterful with the tools we had then.

At any rate, did this transfer over to me being thought of as an expert in the digital world? Yes, it did. Remember, I was starting down a digital road in about 1990. That's now almost 25 years ago!

It all started here: 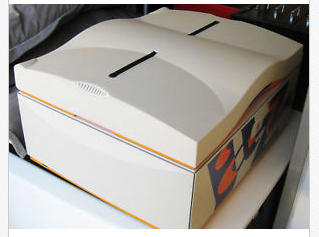 with a donation to the Photo Program at Northeastern where I taught, of a Creo Eversmart flatbed scanner (this is a Jazz model, but it is essentially like the one we were given). This was a flat bed scanner of unsurpassed quality.

The implications of this one tool, valued at $43,000 back then, was immeasurable. All of a sudden we were able to "digitize" our work. Shoot, process the film and place it on the 13 x 19 inch flatbed of the Creo and scan it. Bang, it's in there!

Right away, the quality blew me away. I could see and find things in negatives as scans that I hadn't seen in the actual developed piece of film with a Zeiss loop on a light box. I was smitten. This thing opened up huge doors of artistic possibilities for me. Some students got what a sledgehammer of a tool this was for making art, but not many.

So then the company provided me with one and I was rolling. I got so that I was scanning everything. Can you imagine? If you've read this blog for a while you know I mostly photograph constantly. I was scanning black and white 2 1/4's in full rolls and and 8 x 10 black and white negatives and some 8 x 10 color transparencies. I had the scanner at home so there were scans being made while dinner was cooking or whatever. A great deal of scanning. I  took a class at Creo to learn scanning for prepress as, by 2005, I was making my first book, American Series. I made all the scans for that book and was certified by the company as a "Master Scanner". I have the piece of paper to prove it.

The real struggle then was to turn it into a print. Print it on what? With what? These were early days and printing well was hard.  I spent almost a year making really bad prints of stuff because the first large format printer I had was crap. This was still early days and the Epson 7500 I had was barely adequate as a color printer but all hell broke loose when trying to get a black and white out of it. Magenta black and whites with a green hue, anyone? I made many truly awful prints that year, 2001/2002.

Many of my friends and colleagues were going down this digital path too, in early days using the hybridized system of scanning film to then make inkjet prints. We had numerous issues: metamerism, the fact that prints looked a different color under various light sources, poor papers with uneven consistency, bad surfaces, and no permanence, color profiles that were poor or useless, and many many talking heads filled with confusing and often incorrect information. There were real gurus, of course, some who spoke the truth and had the courage to admit that much was flawed and that they didn't have all the answers. Then were the false prophets, those claiming to have all the answers and asking all of us to follow them like lemmings over the edge. Whatever version there was of Photoshop had its secrets and individual ways of working and there were many who claimed to be able to lead us to the one chosen way. This mythologizing and mysticizing drove me crazy and I hated it. I can remember teaching a very early digital class where I started us out the first day telling students I didn't know anything about what I was going to teach but that we would search out solutions together as we rolled along. In challenging myself to know the material and to problem solve I was able to teach far more than if I just lectured and tested for proficiency.

There was a pioneering spirit behind all this, a sense that many of us were working to make pictures using these new tools and methods and that we were forging ahead into new possibilities and potential outcomes, and we were. While tremendously exciting this was also a difficult time for people to make art, as permanence was not  guaranteed, consistency was difficult and getting what you wanted almost impossible.

I can remember being so surprised by getting a good print but having no idea about  how to duplicate good results from other scanned negatives.

Next up? I am working on a blog about my history of printing,  from analog days  to a Fuji printer we bought for school and on to inkjet printing. There were years in there where we din't know how the printing dilemma was going to work out.