After being in Santa Rosa for about a week, I took a chance and pushed east over a couple of mountain ranges down into the very flat Sacramento River Valley. This is where the majority of agriculture is in California and it is an extensively managed engine of capitalism and a large part of the state's economy.

I ended up in Yuba City for a night. Towns in the valley exist as support for farming, for the most part, and Yuba is no exception.  I decided to try flying over the valley  as there was potential for pictures in the grids of the fields that ran off to the horizon. At the first small airstrip I tried outside of Calusa the pilot was fine about taking me up but it was going to be in the front seat of a crop duster two winged plane. Having a wing below you when photographing is not so good, plus being out in the open meant there would be buffeting of the camera and the resulting images wouldn't be sharp. I thanked him but declined. In the Yuba airport I found a pilot with his own Cessna 182 who was happy to take me up. 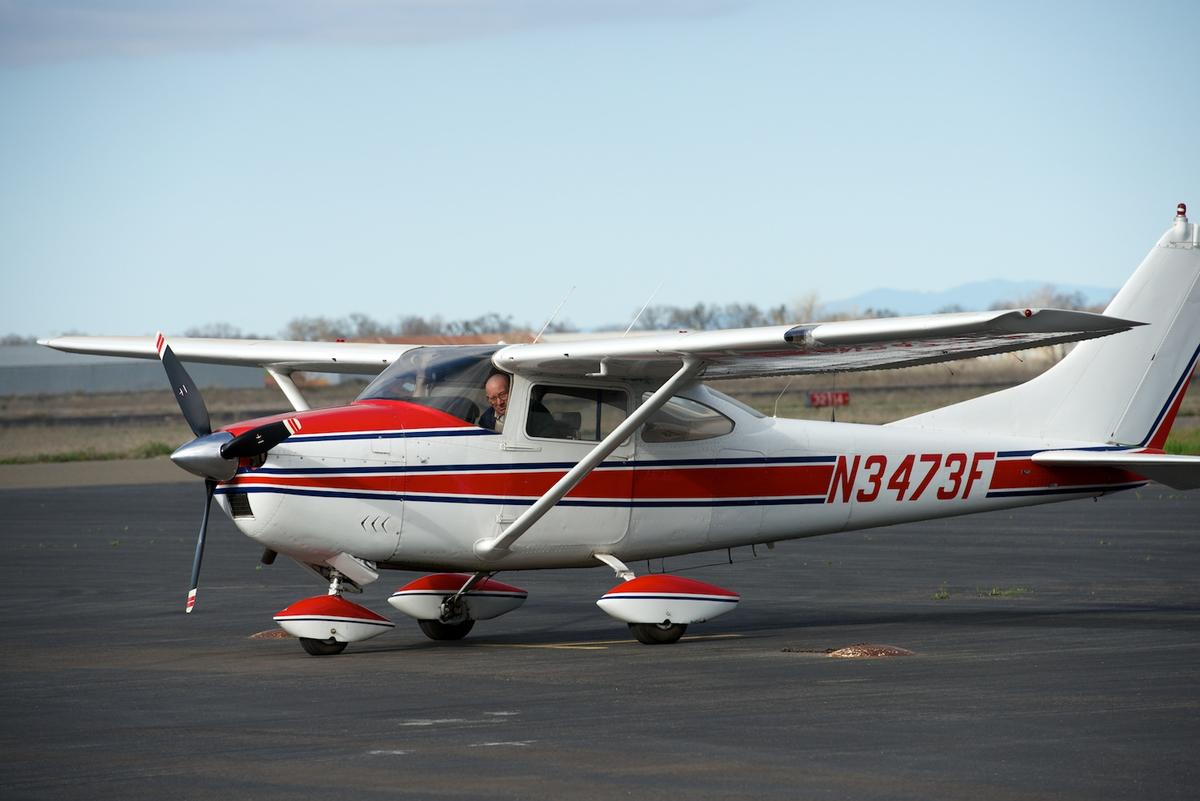 The 182 is about perfect for photography. It is larger than what I am most used to, the Cessna 172. It can fly faster, has more room inside and is very stable. My pilot, Les Sander, was experienced, careful and thorough.  We took off at 10 the following morning and it was clear and calm. Les had asked what I was up to, why I wanted to go up to photograph, and I said that I was an artist and was doing this on my own nickel. He looked surprised but said nothing. Right away we were in some wonderful stuff: 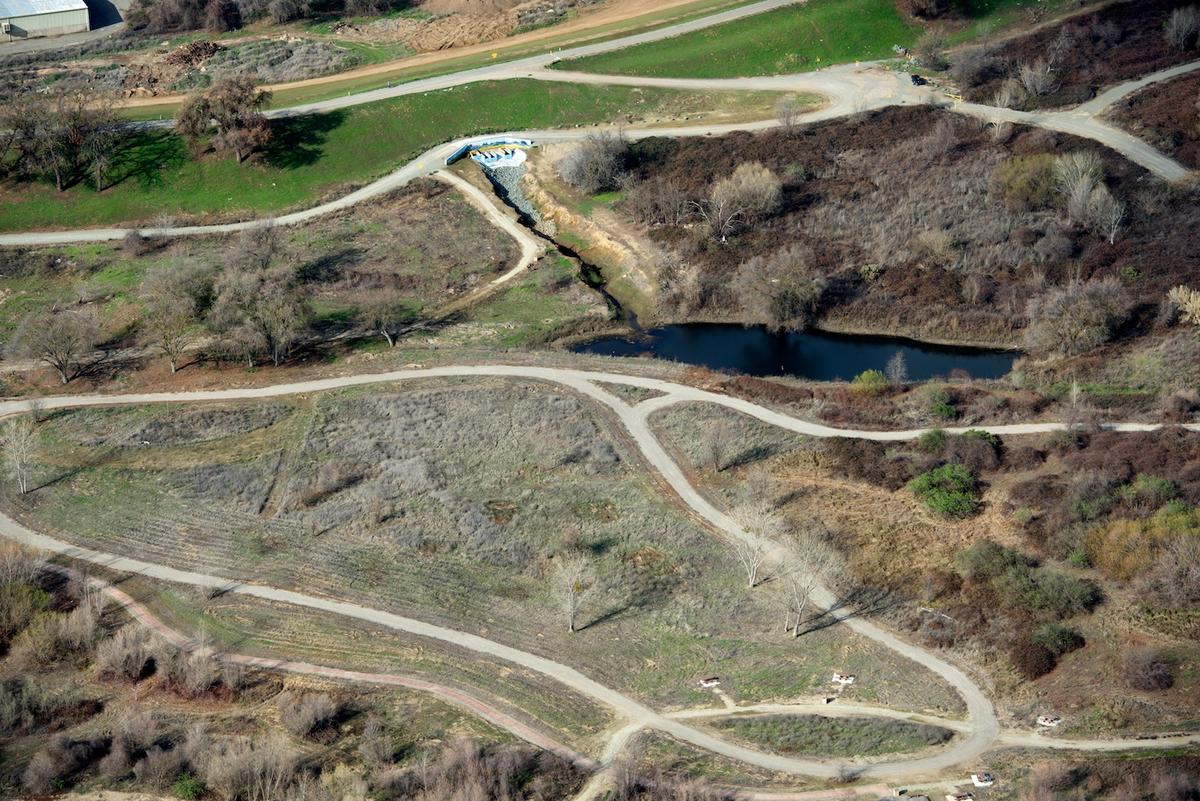 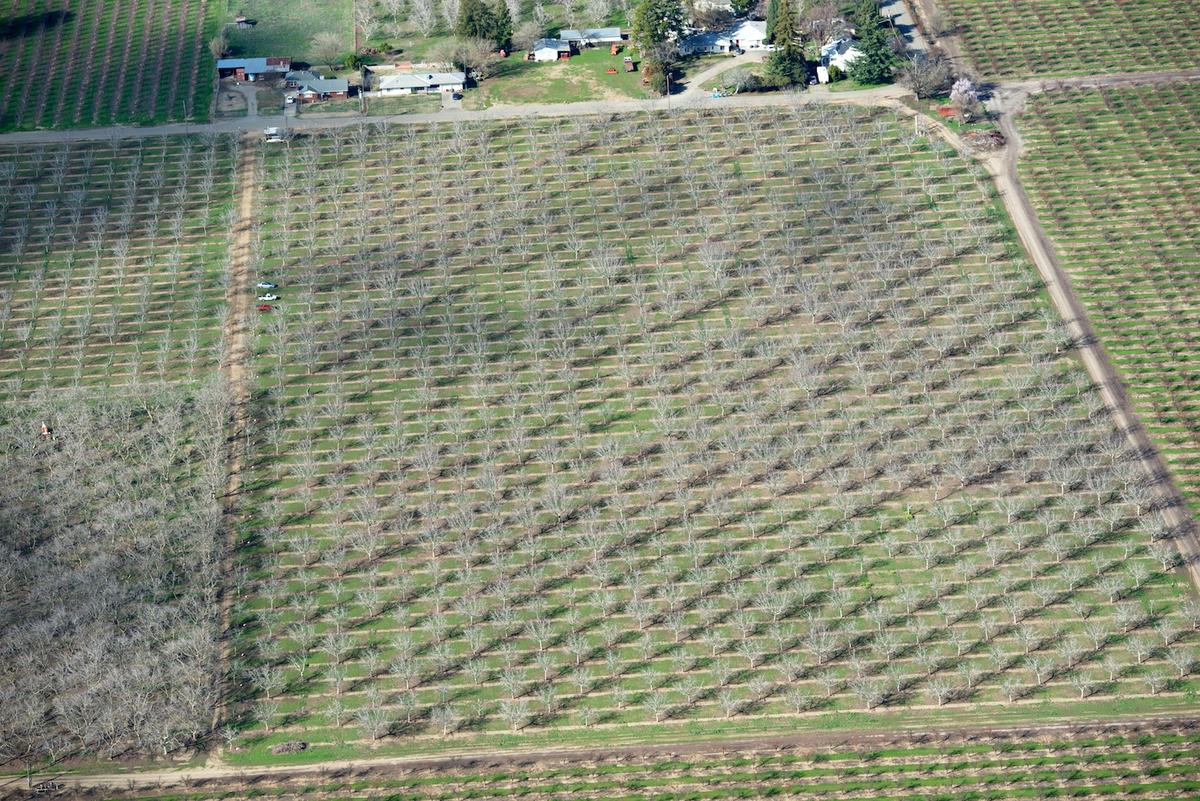 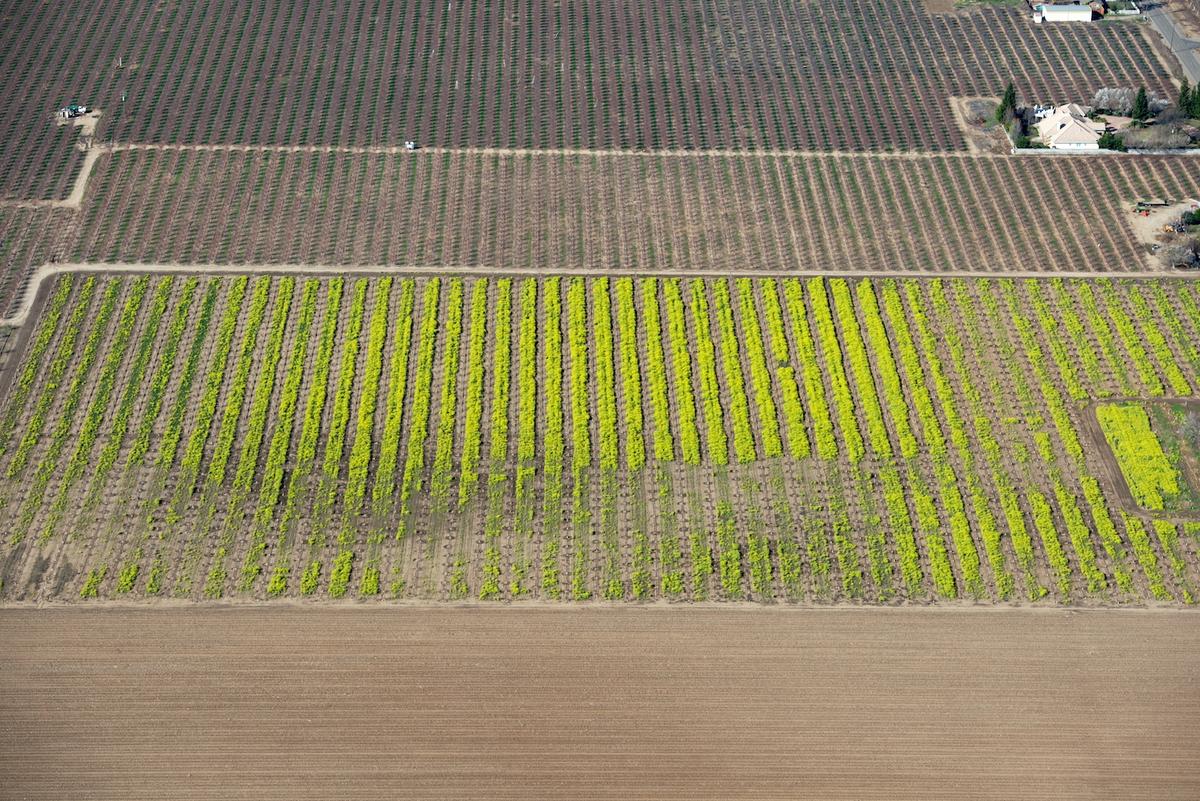 This is a region where they grow a lot of rice and also fruit for dried fruit. The cherry trees were in bloom and a faint pink color: 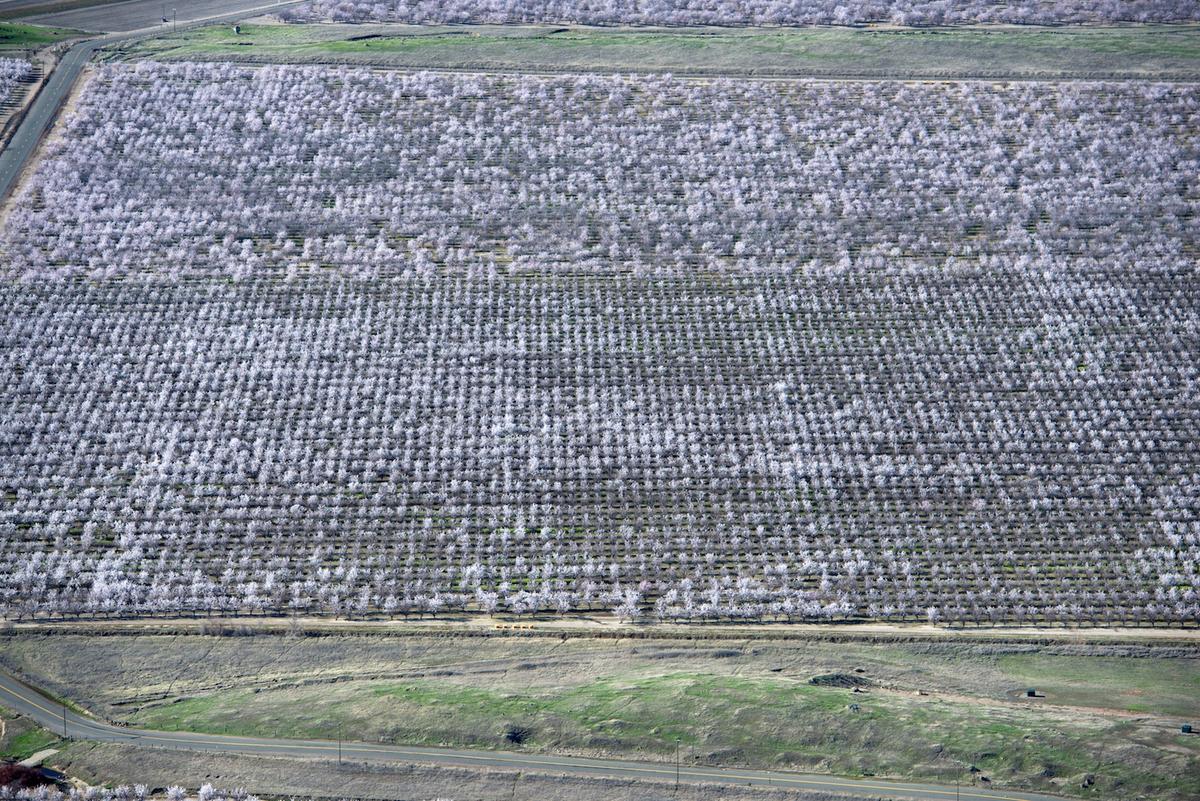 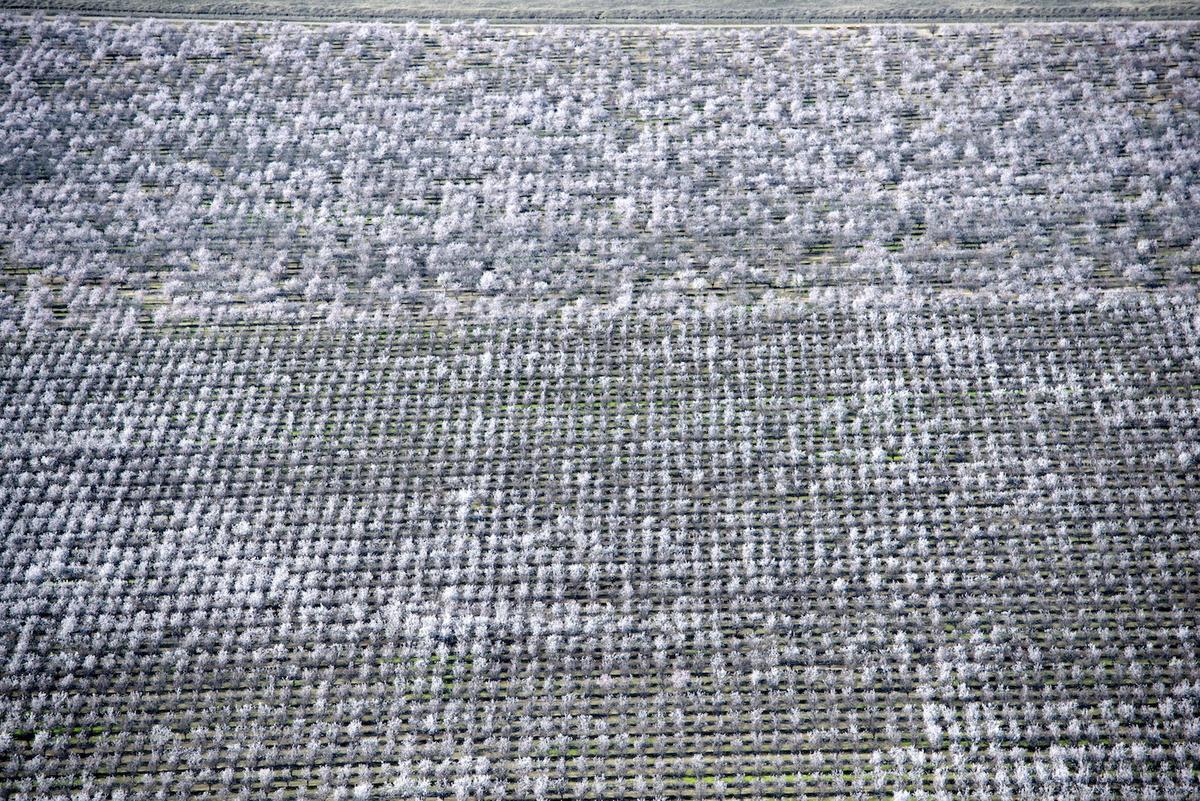 Just west of where we took off, there lies a low range of hills called Sutter Butte, sticking up out of the flat valley floor like a raisin on a breadboard, an eroded butte from eons ago and the only thing higher than a two story building for miles around: 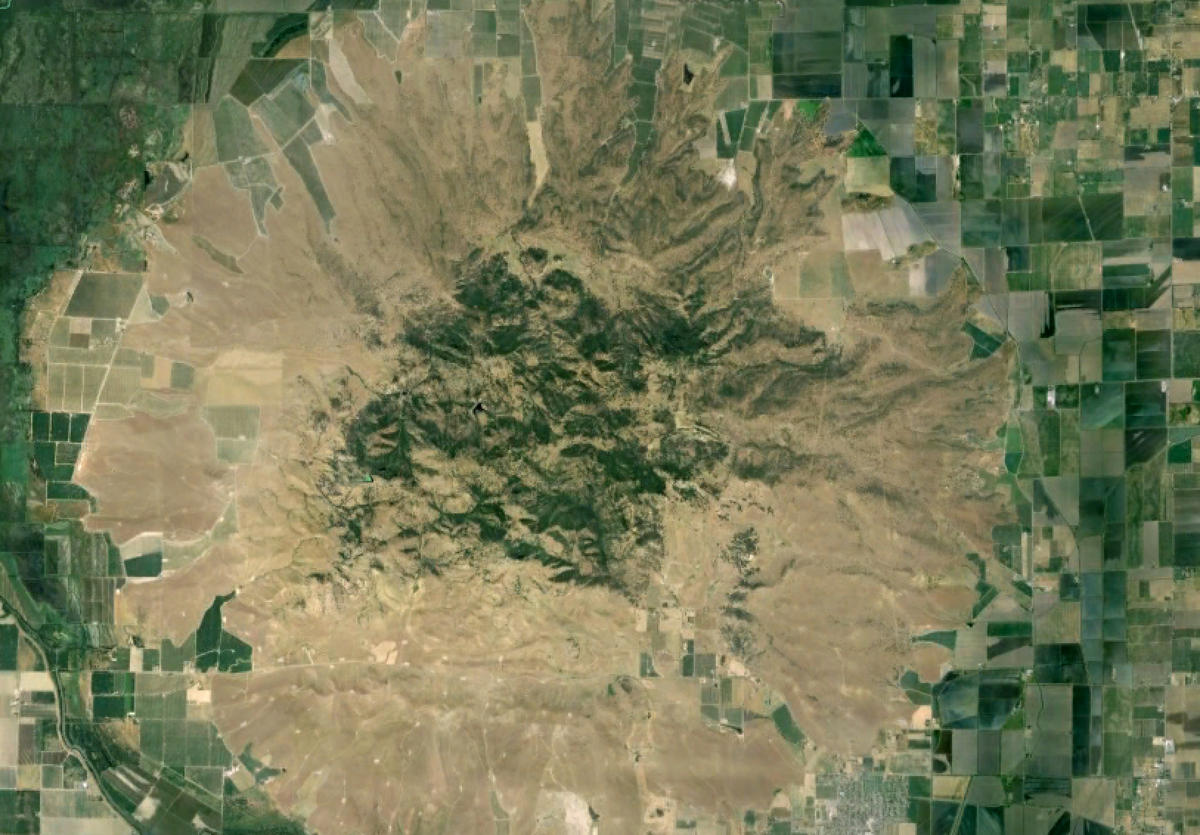 On the way across the valley headed west we circled it on the northern edge: 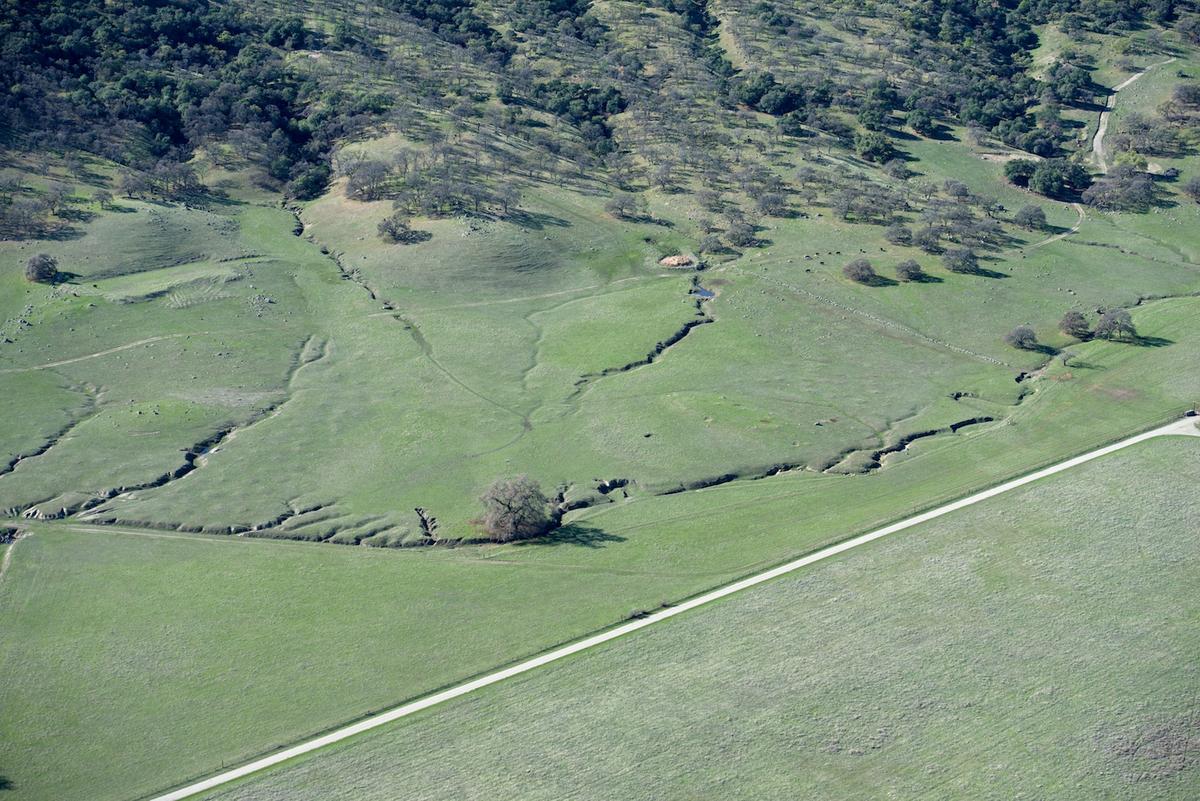 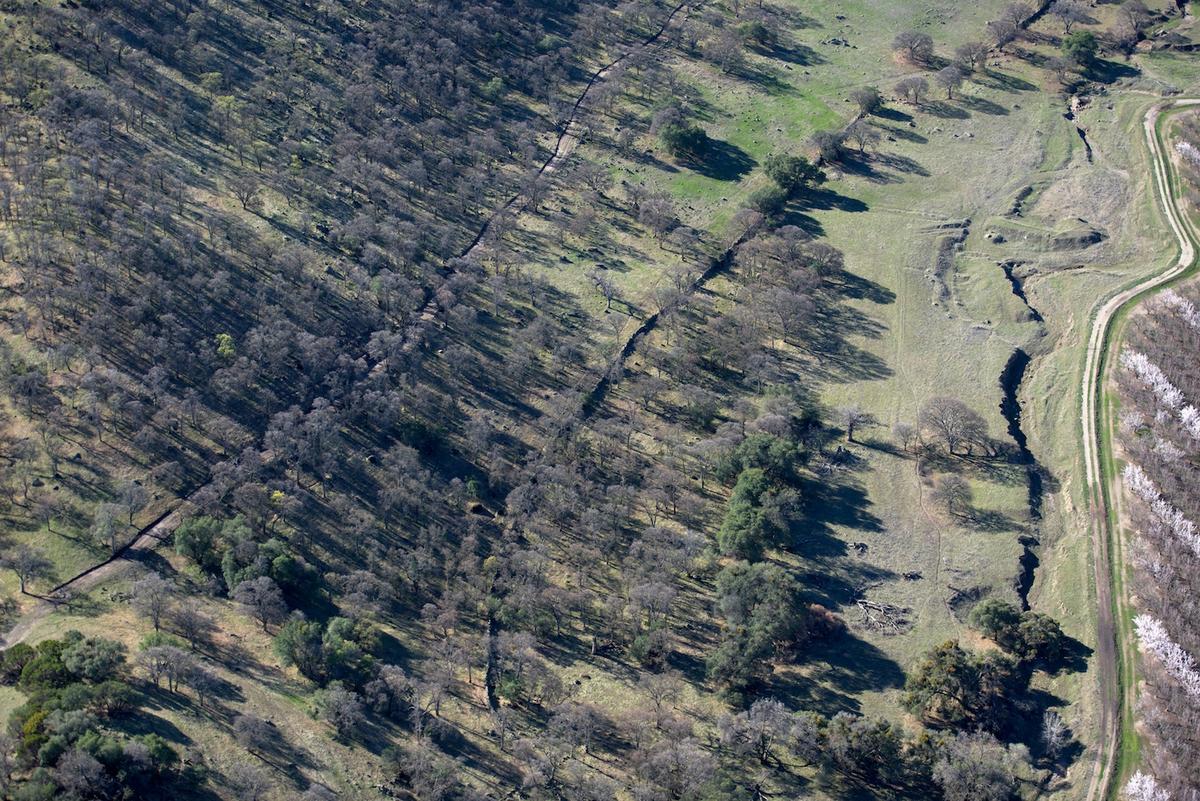 Leaving Sutter Butte behind us we flew across the valley floor at about 1500 feet at 135 mph. 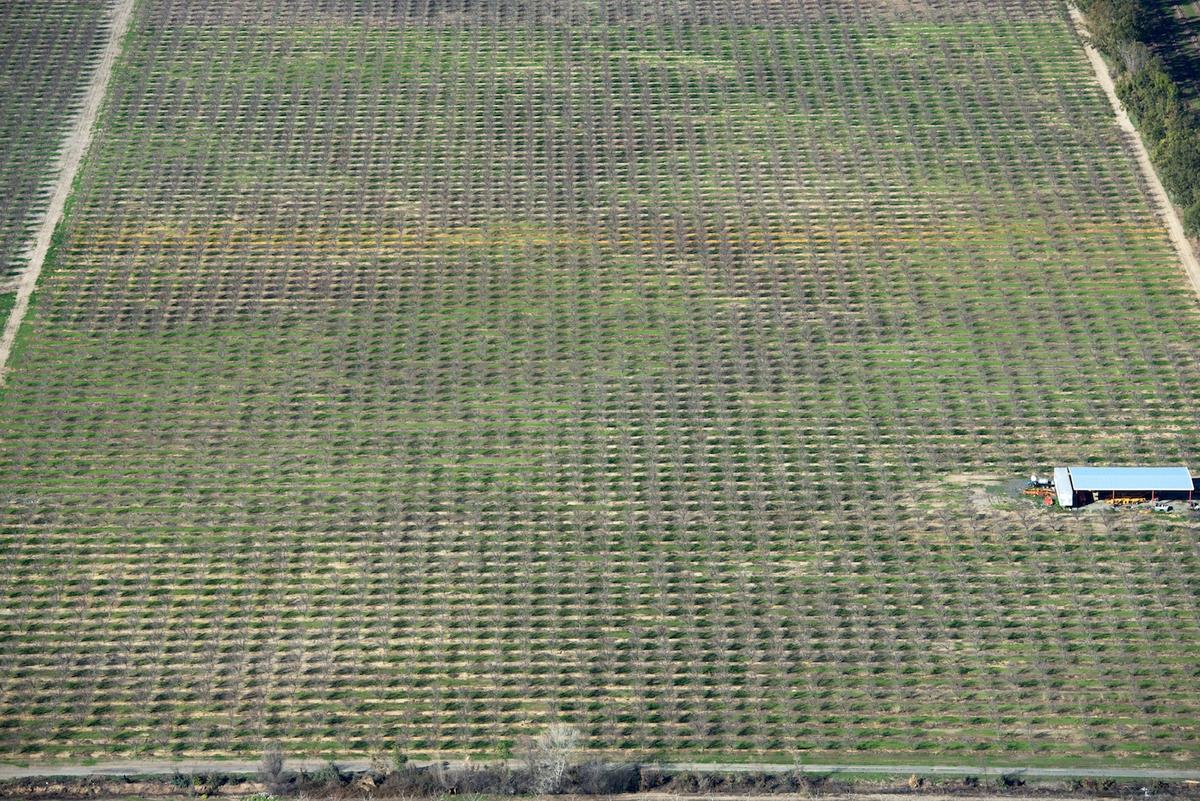 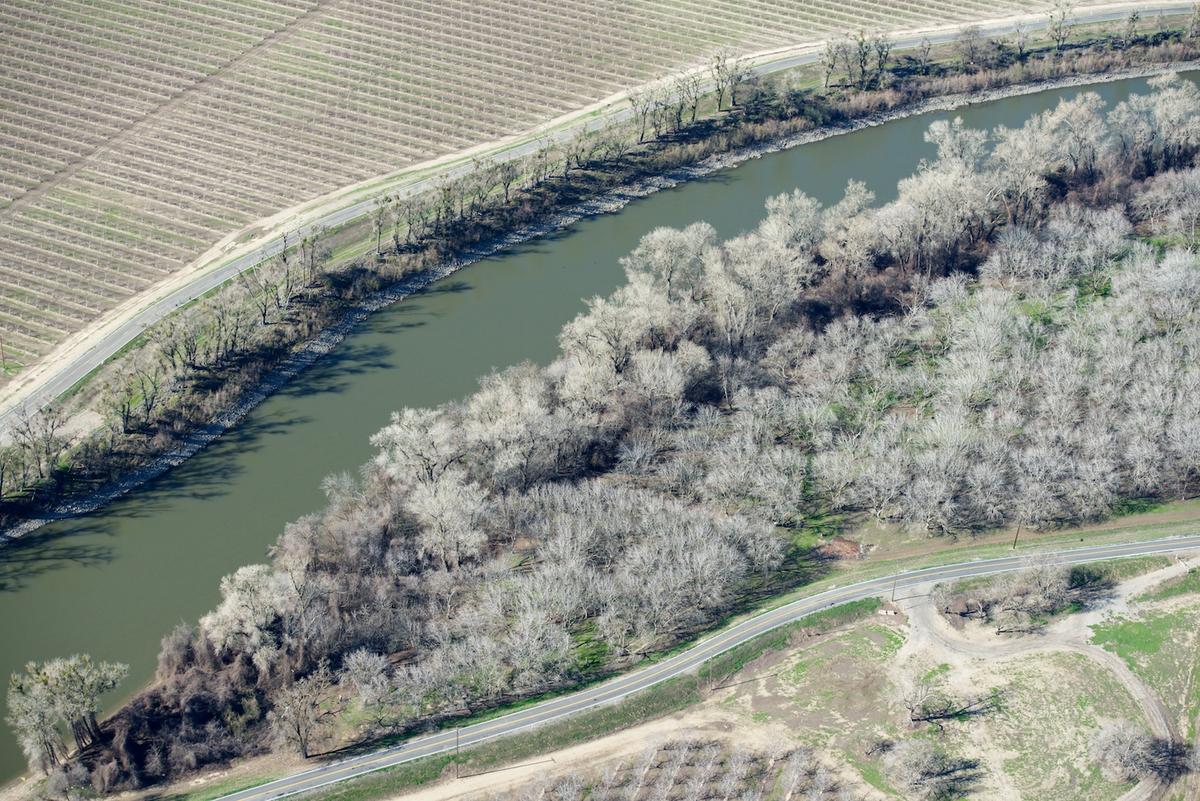 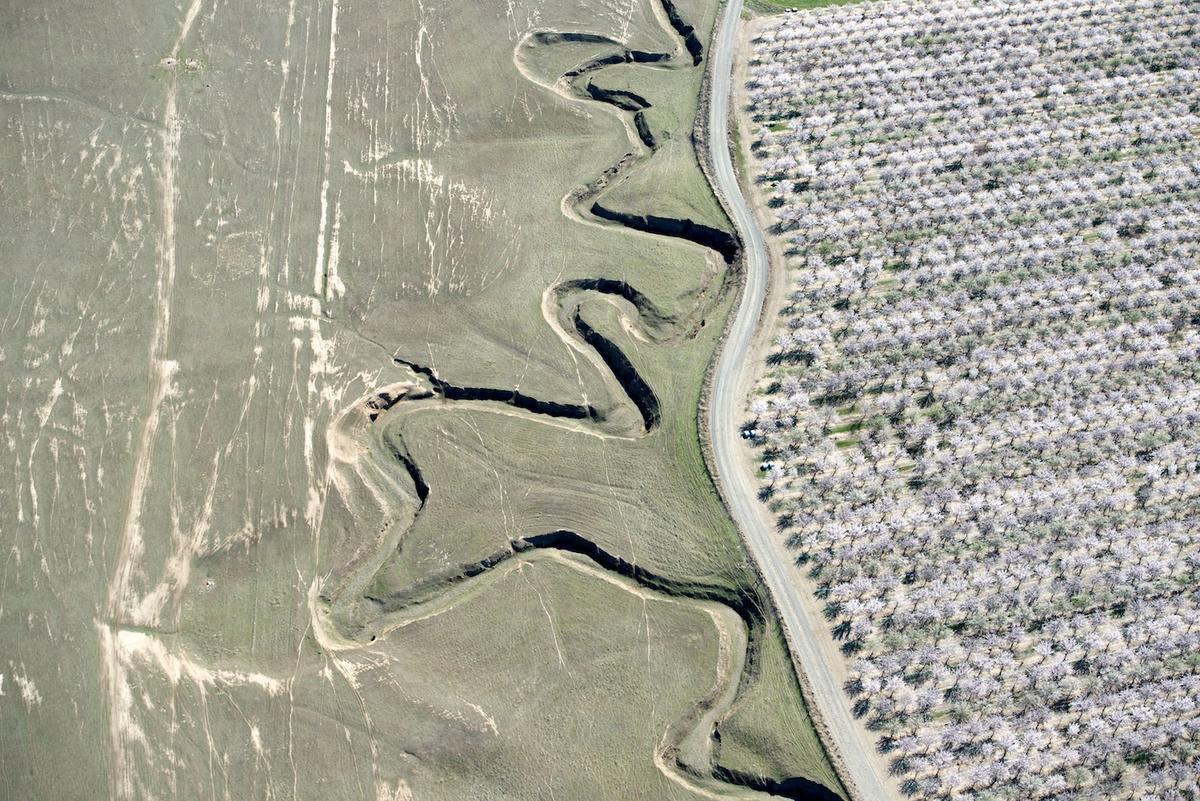 Then headed for the foothills along the western edge of the valley. 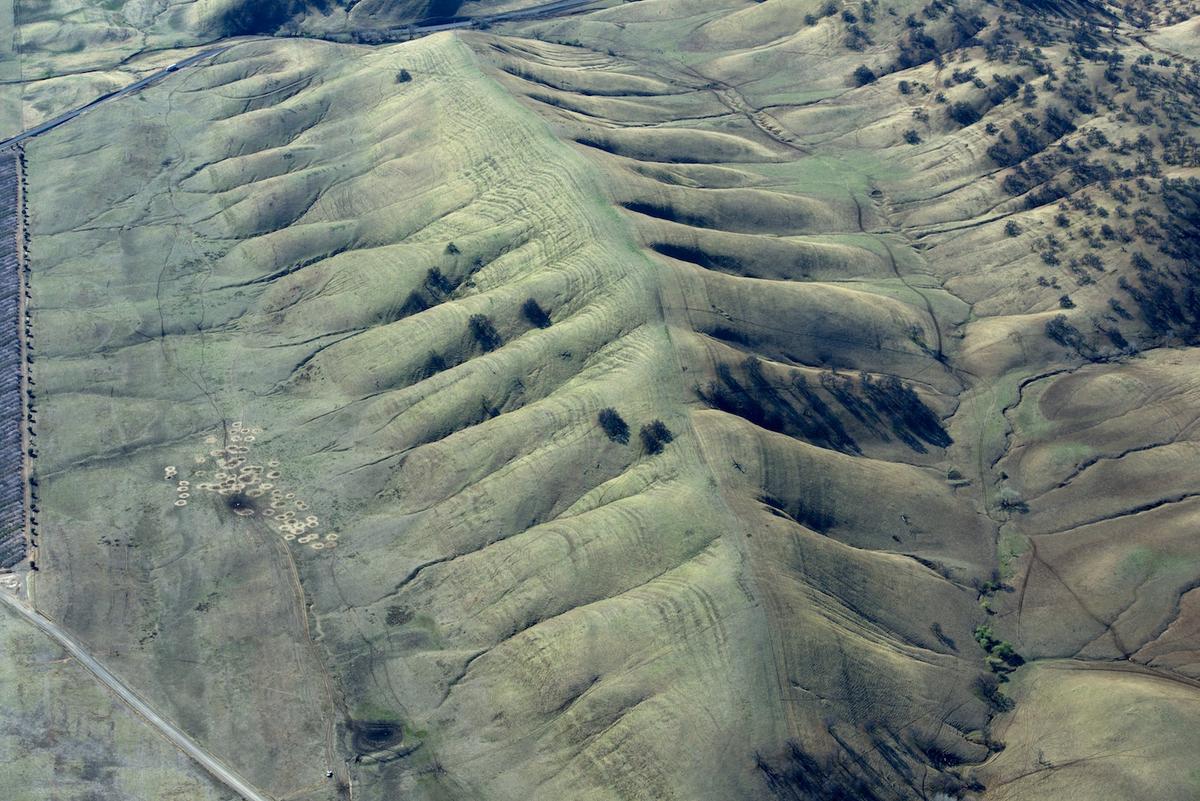 Les had to fly the plane higher to be able to get over these hills and so he took it up to about 3000 feet. Know how you get a single engined small plane higher? You fly it in circles with the stick pulled back a little until you're at the altitude you need. Takes a while. 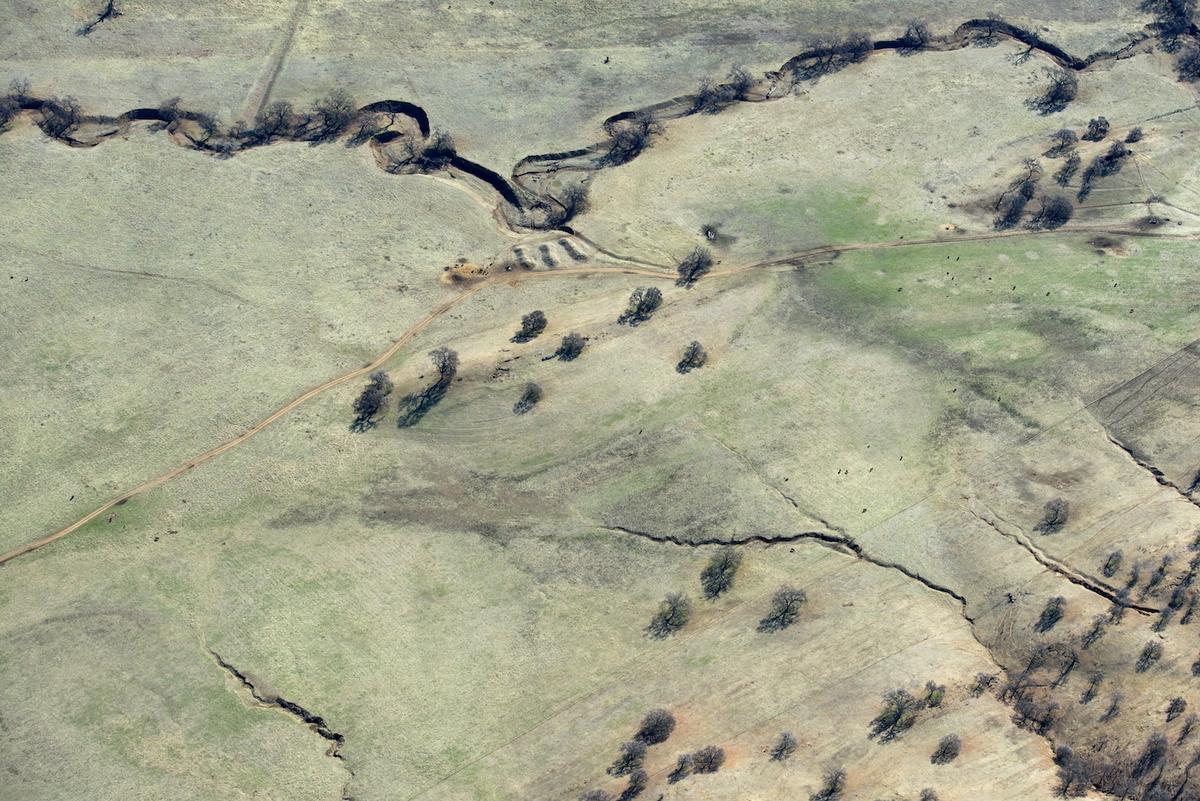 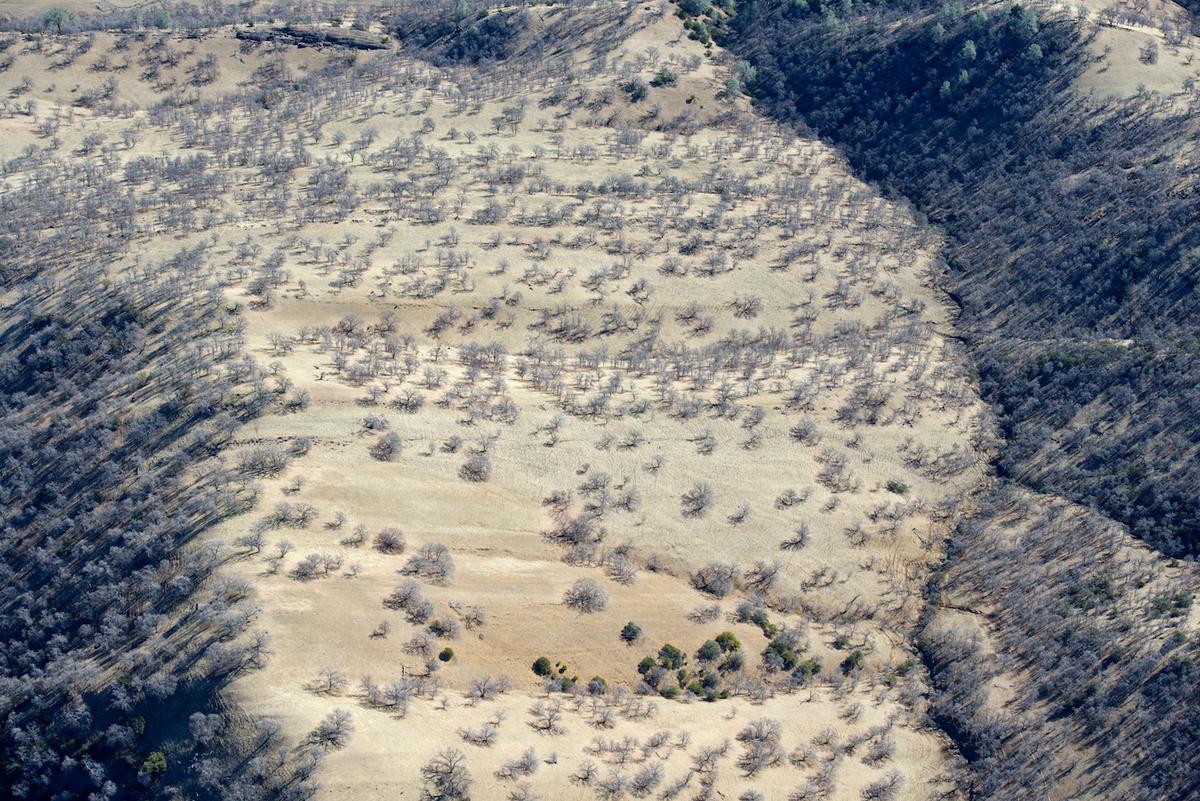 Next up, in California Aerials 2, I will chronicle the flight back to Yuba City. It'll be good.

Along the way Les asked on the intercom through our headsets as we flew along if I was  going to use the pictures I was making to paint from and what did my paintings look like. I had confused him by telling him I was an artist. I explained that no, I was a photographic artist and that I would make prints of the pictures I was making and show them in exhibitions in galleries and museums, maybe. He said, "Really?"

I said yes, that was usually what happened.

Next up: California Aerials 2