These days most photography is hugely quantitative. We tend to make a lot to get a few. There used to be some things that would restrict photographers' output: the cost of film, the difficulty of processing, the bulk of carrying film around, the physical storage of the materials, to name a few. Back in the 70's I was cranking out so many photographs I felt I needed a "restricter" and one of the reasons I started photographing in 8 x 10 was to slow me down. During the 80's Ilford granted me free film and I remember I would shoot maybe 600 sheets while teaching in Italy each summer. It would take me about 6 months just to develop all those sheets. So maybe my tactic wasn't wholly successful.

Nowadays there really isn't anything to restrain us if we photograph digitially. When in doubt, we make another picture. This kind of indiscriminate way of photo- graphing gets us in trouble later when it is time to edit the work and so I would urge economy of scale when shooting. It  becomes difficult to know which picture is the picture when confronted with too many choices.

But we all make more bad pictures than good ones. I can't think of too many other fields that work this way, except that movies are famous for more footage ending up on the cutting room floor than in the can. But we need to become comfortable with our failures and try to learn from them. Now that I shoot all digitally one of the things that has helped me is to look at the pictures I've shot during the day, back in the motel room at night. Then I try to apply what I've learned the next day while out shooting. When I do this, spend nights in motels, I always think of Lee Friedlander, when he was making cross country trips in the 50's and 60's as his motel experience was very different. You can see it in his self portrait as he sits there, probably exhausted from driving and shooting all day: 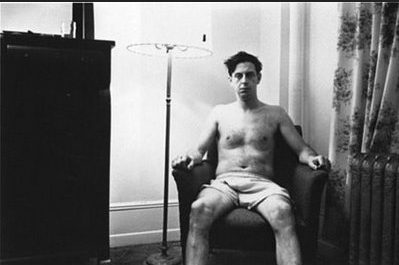 To me this looks like someone who's alone and probably lonely, separated from his family by the work he does, someone immersed in making pictures and stuck in a motel room at night with nothing to photograph.

Of course, a view camera photographer on the road has got to figure out some way to get the shot sheets out of his film holders into some storage boxes and load fresh unexposed film into them so as to be ready to shoot again the next day. This means total darkness and no dust.  I can distinctly remember when checking into motels asking if the bathroom in the room I was being given had windows or not. If it didn't it made loading film much easier.  I would always travel with black tape and black fabric just in case. I did get some strange looks, though, at the front desk.

As the technical side of photography continues to move forward and progress our skills as an editor are called into use more than ever before. One of my colleagues at Northeastern, Andrea Raynor, a professor I am proud to say I hired, was the best editor I have ever worked with. Her ability to find the one image that was the right one out of scores of files was legendary and much admired not only by students but by people like me as well.

You might want to think about strategies that might result in less shooting by being discriminating, particular and specific.