In Editing Part 1 I covered how I used to edit my work when I was a film based photographer printing my own black and white photographs in my own darkroom.

In this post I'll cover how things began to change  as many of us started to scan our developed film, work on the files in Photoshop and then output our imagery digitally. Right away, we  began to accumulate imagery in our computers. In editing, part of our process was to decide to scan or not scan. Big change. Look at contact sheets made conventionally to determine which to print  or scan whole rolls at once to make a screen based contact sheet? In these early days, in the 90's, scanning was really labor and time intensive. To get high resolution scans we needed cumbersome drum scanners or expensive flat bed scanners. Many would rent these, paying for time in front of scanners at an hourly rate. Once scanned the files needed to be "cleaned" using the cloning tool in Photoshop to remove dust spots. Each 8 x 10 negative could take several hours to clean to make it ready to print. Fairly quickly we learned to scan our negative, then "flip" the files to make the scans into positives. Bingo, now we were living in a more digital world in that we were now editing our imagery on screen, instead of as a contact print on paper. Also very quickly we had a storage and filing problem. This was before even Adobe Bridge. Where was that scan of that negative I shot 1 1/2 years ago from Wyoming that I included in that show I had downtown at Studio Soto Gallery? And what was the final version I printed from? Big high resolution files from 8 x 10 not only gummed up the works as they would be slow to open and slow to work, they took up a lot of room. Computer crashes were all too frequent and it wasn't just a question of cost, no computers had enough power to handle these big files fast. Each of us was working out our own system for filing and storing our scanned files and some of our systems were pretty bad. Does this paint a picture of a mess? It was.

Along came first Bridge (it comes with Photoshop), then Lightroom and Aperture and our world changed. Bridge allowed us to see our files as thumbnails before we opened them. We now had wonderful systems for storing our files that allowed us to organize them, date them, keyword them, see them and even prepare them for printing.

where files were stored in folders with random names and that weren't even arranged alphabetically or by date, to this: 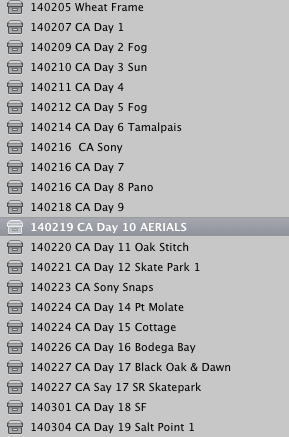 where all the files from a given shoot are contained and arranged by year, date, time, down to metadata that tells me, simply, everything: aperture, shutter speed, lens and camera used, how large the file is, focus, time, geographic region, for some cameras actual location, and so on. This above is what the projects look like in Aperture. OMG! What a breath of fresh air that was! Both companies, Lightroom by Adobe and Aperture by Apple have my everlasting gratitude for making a system that has helped us so very much. I use Apple's Aperture because I like it best but to each his own.

As I began to switch over to shooting  digitally, this because the cameras were getting better, there were systems in place that supported file generation in a  digital workflow from start to finish.

Okay, there's a structure in place now where we can see thumbnails of our  pictures, we have metadata on each file, so how do we choose which ones to print? 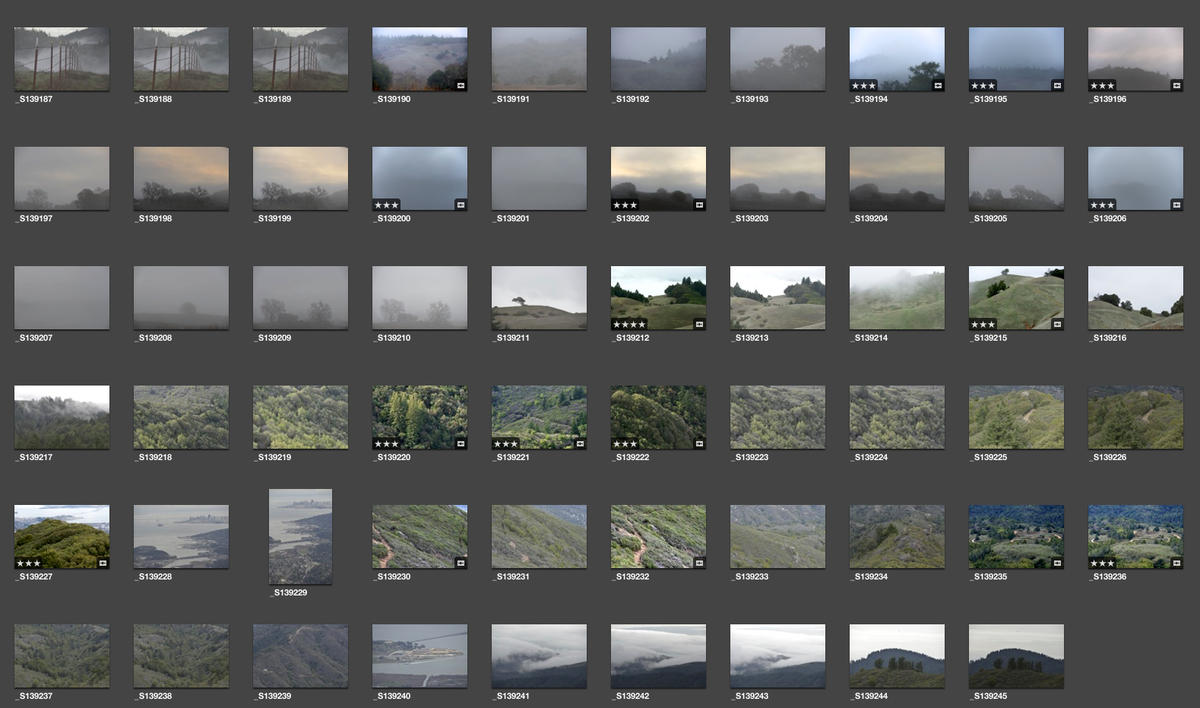 These are from a day in February where I drove up Mt Tamalpais outside San Francisco. You can see that some of the thumbnails have three stars under them. That's the start for me.The three stars mean I think the files are worthy of looking at again, perhaps worth blowing up to see full screen ,perhaps needing to be darker, lighter, softer, flatter, more blue, less blue, and so on.

With Aperture I can choose to see just the ones that are starred (this is true of Lightroom as well):

I can shift them around, keyword them, adjust them, and so on. Once I've lived with these a while, looked at them over maybe a few days, I then decide which ones I will export. I export the "versions", meaning files that I have already worked on and color corrected. I export them to a folder I've created on my desktop, perhaps calling it: CA 2014 Mt Tamalpais.  I export them as 16 bit Tiff Files. Now they sit as full files, in a folder and can be opened in Photoshop, which I do, one by one. Once I open an image in PS, I size it , tweak it, meaning fine tune its color, check it for any weirdness in the sky (these days a dirty sensor in the camera will leave a small circle on light areas), adjust small areas (I use Nik's Viveza) and sharpen it (I use Nik's Sharpener Pro), then I flatten this layered file and save it as an RTP file, meaning a Ready to Print file.

Sorry for the tech but I thought it valuable to explain my workflow a little. One important thing throughout all this and that is that I have now lived with this particular file for awhile now. I've chosen it, worked on it as a full file and large on my display, I've adjusted and tried to visualize it as a print. I've probably put it away and come back to it another day or after a beer or a coffee or first thing when I woke up.My idea is that it becomes an old friend,  familiar and known as opposed to something I haven't seen before.

The last part of editing? Print it. Carry it through to its end by making a print of your image. There are many forms this final step takes. Most will make small prints cheaply to allow living with them a little. I don't do this. I make full size prints (these days most of my prints are 21 x 14 inches on 22 x 17 inch paper). Foolish? Wasteful?Costly? Maybe, but I feel I need to see it full size to determine whether it is good or not. This is clearly a holdover from my darkroom days in that I was always trying to make the best print be the first print. That seldom happened, of course, as most times I would need to throw the first print out, make some adjustment to the time or the contrast or the size of the print or the burning and dodging, and then make another print.

There's another big step to editing but I will save it for when we get to Editing 3, which will be riveting, I promise.