You know that first day after you've been in a plane overnight and you are so severely jet lagged you're running on fumes? Yup, that was me yesterday.

This will be brief but let me give you an example. Flew from Boston to Zurich Saturday night and from there on to Paris Charles De Gaulle yesterday. Arrived in Paris and slogged to baggage claim where there was the longest luggage belt I'd ever seen crawling along and didn't know where to go to pick up my one bag. This was Sunday so things were slow. Went over to lady behind the help desk to ask where to pick up my bag and she could hardly look up at me she was so busy working on her nails. She said number 4. I thanked her and sat near number 4 and waited. And waited, and waited. No bag. I was now envisioning what was going to happen with "lost luggage" while I was picking up a rental car and driving south to Alba, Italy. Of course, in the suitcase was everything including my tripod. Not good. Headed back to show her my luggage ticket to make sure she knew I came from Boston. I showed it to her and she looked even more bored and annoyed. She said number 4.  I was just about to light into her when I looked over at the slowly moving belt and there was my bag! Ran over, grabbed it and at least this potential nightmare was now over. I had my luggage.

More and other kinds of sagas ensued through the rest of the day including me driving towards downtown Paris while I was trying to go the opposite direction but I ended up outside Lyon a few hours drive later last night where I am now writing this on Monday morning safe and warm and rested in a hotel and will drive on to Alba in northern Italy to meet up with friends John Rizzo and his wife Donna. 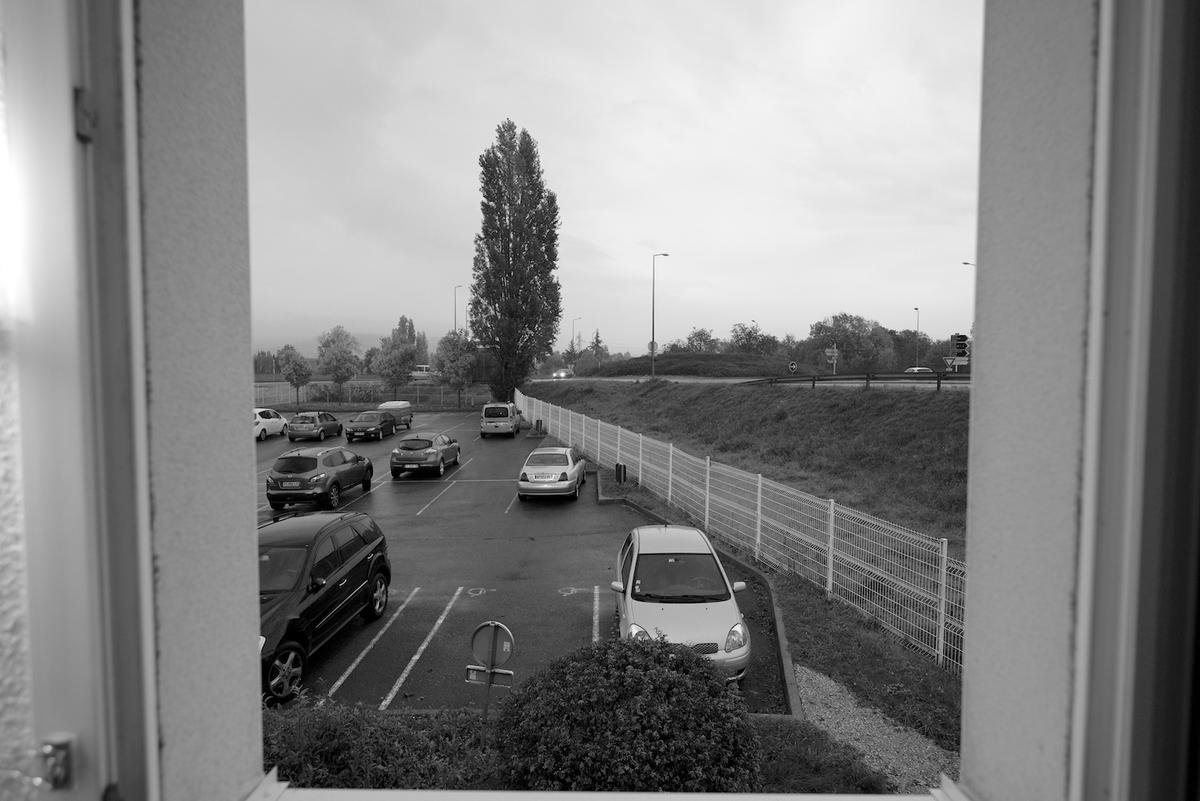 The "view" from my hotel room this morning.

Pictures coming soon. What can you do on a trip that is partly tourism, partly amazing food, partly friends, partly photographic? Can you make pictures that count? Should you try? Can you mesh what you do here into other things you've done before? Does it matter? Last time I did this I was in Italy in 2012 for a couple of weeks and stayed for three days in Trieste to shoot trees from the same region I'd shot trees in 2010. Those were good. I also made Rivalta, Italy on the same trip, one of my favorites. There is an art to making pictures in someplace new and where you aren't an expert. I am very good at this, or, at least, have been in the past.

Stay tuned. This should be good. Here for a couple of weeks until mid month at Paris Photo and will report on what that is like.